The king of NASCAR, Richard Petty, returned to the Walt Disney World Resort this week to recreate taken during Magic Kingdom’s 25th-anniversary celebrations alongside Mickey Mouse.

A lot of things have changed over the course of 25 years around Walt Disney World, including Cinderella Castle taking on a less edible makeover for the 50th celebration! 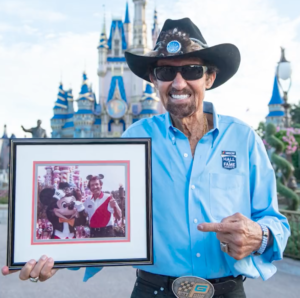 One offering that has faded into the Disney sands of time is the Walt Disney World Speedway, which was home to the Richard Petty Driving Experience from 1997 (one year after the 25th celebration) until 2015.

Guests could experience the thrill of driving a NASCAR vehicle, with even a junior ride-along offering being available for younger guests who wanted to get in on the action. 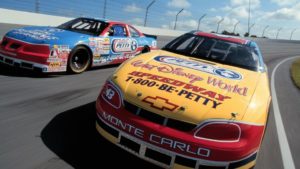 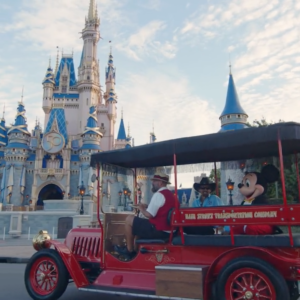 While visiting the park, Mickey and Petty got a tour of Main Street USA on the Main Street vehicles, which began transporting guests once again in November 2021 after the COVID closure. 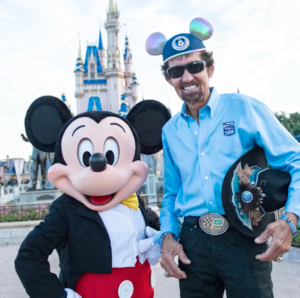 In recreating the 25th-anniversary photo, the NASCAR king posed alongside Mickey donning the 50th-anniversary ear hat made for the 18-month celebration.

Watch the whole video as shared by Disney Parks on Twitter, below.

“The King” of NASCAR, @therichardpetty, recently returned to @WaltDisneyWorld Resort to visit his dear friend Mickey Mouse! 🏁 The pair recreated a photo that was taken in front of Cinderella Castle during the 25th anniversary celebration of Walt Disney World back in 1996! 📸 🏰 pic.twitter.com/JPaBQqK1DK

We hope Richard Petty enjoyed his catch-up with Mickey Mouse and enjoyed all of the wonders of the Walt Disney World Resort during the 50th anniversary!