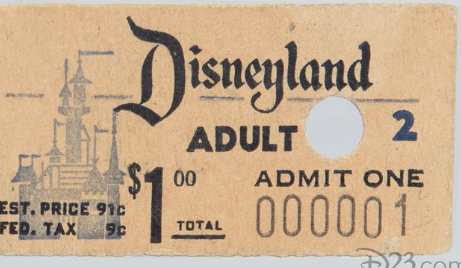 Today we have MagicBands and e-tickets but have you ever wondered what the first Disneyland tickets looked like? We have an answer for you thanks to D23, Disney’s official fan club along with the Walt Disney Archives have released a couple of awesome images that we couldn’t wait to share with you!

Last Thursday, D23 released these incredible pictures related to the history of Disneyland Park. The first image which you can see below is an official Cast Member Badge like the one employees would’ve worn at the parks in the early days! What makes this pin particularly awesome is that it belonged to none other than Walt Disney himself who wore it back in 1955!

The second image is a look at the very first ticket sold for Disneyland theme park. It was purchased by none other than Roy O. Disney on July 18th, 1955. The very first ticket cost $0.91 with $0.09 tax making the total price to get into the theme park $1.00. That would be about $9.57 in today’s prices. Pretty astonishing right!?

If you’re not following along with D23 and the Walt Disney Archives you’ll definitely want to as you never know what kind of awesome finds they’ll unearth next! They even have documentary coming out titled Adventure Thru the Walt Disney Archives which provides a look at other rarely seen treasures. We do know that the film is slated to premiere exclusively to D23 Gold Members online on June 27. You can find out more here.

As of going to print, there is no word as to whether the film may eventually be broadcast on Disney+. However, this is a story that we’ll continue to follow closely so keep checking in with us for further details!