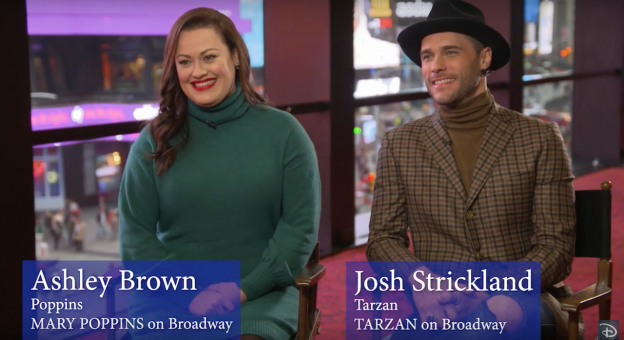 The Epcot International Festival of the Arts may be winding down in a few more days but there’s still time to check out on of our favorite highlights – The Disney on Broadway Concert Series!

These awesome concerts showcase the best of Disney’s Broadway contributions with some of the Great White Way’s leading talents. These week guests will have the privilege of seeing  Ashley Brown, who starred in the title role of the original Broadway production of “Mary Poppins,” and Josh Strickland, best known for playing the leading role in Disney’s “Tarzan” on Broadway,  You definitely won’t want to miss their special performances on the very last day of the festival, Feb. 24, when Ashley and Josh join forces with Sydnee Winters (“The Lion King”) and Michael James Scott (“Aladdin”) as they put on an incredible night of shows to cap off another great festival season!

Check out the video below to learn more about Ashley and Josh and the Disney on Broadway Concert Series experience!

Here’s the full lineup of show-stopping talent for the Disney on Broadway Concert Series:

So what are you waiting for? Head on over to Epcot this week and celebrate Disney’s incredible contributions to Broadway with these awesome concerts! Also keep following along with MickeyBlog for details of Disney’s next exciting Festival – The Epcot International Flower & Garden Festival coming in March!