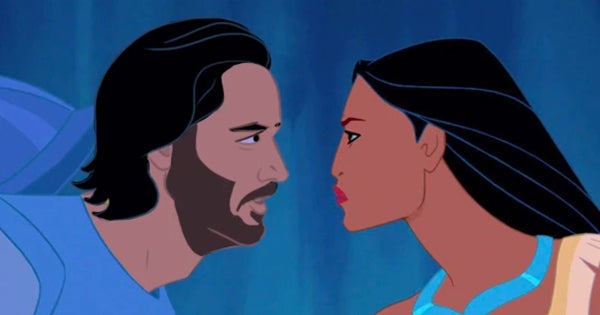 In case you haven’t noticed there’s a bit of a Keanussance going on! With films John Wick 3 and Toy Story 4 dominating the box office, Keanu Reeves is the name in Hollywood and on social media that everyone is talking about.  That’s why we couldn’t wait to share with you on artist’s Instagram post that has gone viral feature a hilarious mash-up of Keanu Reeves assuming the role of some of Disney’s most beloved princes.

I drew Keanu as Disney Princes because it felt right. ?‍♀️ (Link to the full post in bio!)

We don’t think you can go wrong with any of these Reeves-incarnations but our favorite has to be Keanu Reeves as Prince Charming!

So what is the likelihood of seeing Keanu Reeves in future Disney films? As you know he is currently playing the role of Duke Caboom in the recent release of ‘Toy Story 4.’ Caboom, a Canadian stuntman is winning over audiences with his nervous bravado and hilarious hijinks.

Check him out in this official clip below:

Though it’s unlikely that Reeves will appear in any of the upcoming live-action releases to get the green light from Disney (Little Mermaid and Mulan are next) according to a recent piece in ComicBook.com, Marvel Studios chief Kevin Feige had this to say about incorporating Reeves into an upcoming release:  “We talk to him for almost every film we make. We talk to Keanu Reeves about [everything]. I don’t know when, if, or ever he’ll join the [Marvel Cinematic Universe], but we very much want to figure out the right way to do it.”

Until the day that Keanu Reeves graces the screen as a Marvel superhero readers check can him out in Toy Story 4 currently in cinemas.

Mingle with your favorite Pixar pals with a visit to Toy Story Land at Walt Disney World or Pixar Pier at Disneyland Resort. There are still fantastic 2019 discounts to be had and packages are currently available to book through until the end of 2019.  Fill out our form below to get your FREE, no-obligation quote from MickeyTravels.