As we previously reported, Epcot is in for some major overhauls. One of those changes will be made to the entrance. The plaza will welcome guests with new pathways, sweeping green spaces and a newly reimagined fountain.

Disney recently filed a new permit that appears to be for the demolition of the Leave a Legacy monoliths and Epcot entrance overhaul project. The permit states “Enabling Works at North Pathways. Includes sitework, demo, hardscape, landscaping”. 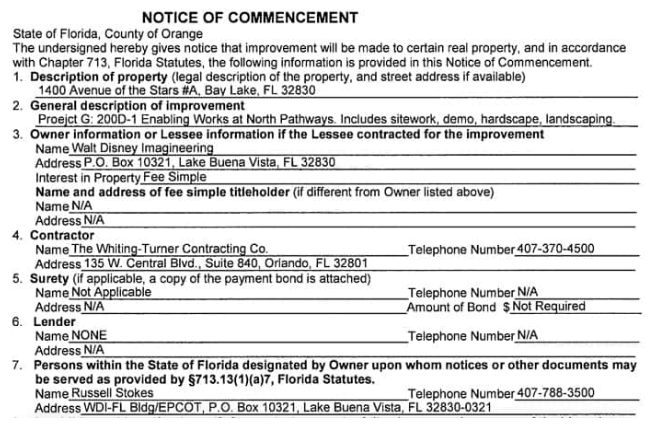 Don’t worry though, Leave a Legacy won’t be demolished just moved to the outside of the entrance to the park.

The permit is naming Whiting Turner as the contractor. If that name sounds familiar, is because they are in charge of projects such as Star Wars: Galaxy’s Edge, the TRON roller coaster, the Star Wars Hotel, Toy Story Land, and more.

Innoventions West is expected to be demolished as well as part of the overhaul. Causing Starbucks and Club Cool to be temporarily closed. Starbucks is rumored to be moved to the Epcot Experience Center, formerly known as Odyssey between Future World and World Showcase.

Work is expected to get started on the project this Spring/Summer, and be finished in 2020. These permits confirm that with their “1-year” work duration.