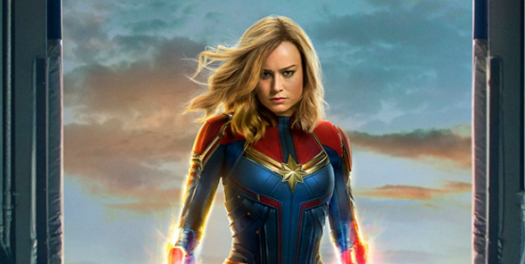 Frederick Joseph is making headlines again. Last year he started a campaign for a GoFundMe called the #BlackPantherChallenge to send kids to the Marvel’s Black Panther. He raised over $50,000! It inspired a global movement that raised nearly one million dollars to send children all over the globe to see the movie. Well, he has now started another GoFundMe, but this time he’s calling it the #CaptainMarvelChallenge. He wants to send young girls to see Marvel’s first female-led film. Joseph said in a press release,

“Captain Marvel is Marvel Studios’ first female-led film and an important moment for representation. The lead character, Carol Danvers, is not only a superhero, she’s also an athlete and fighter pilot. She is a prime example of the fact that women can do anything, and there isn’t a better person to be playing her than Brie Larson, who has been one of the faces of numerous feminist movements such as TIME’S UP. I am inspired by Brie and women around the globe and look forward to sending as many girls as possible to see this film.”

The funds from this campaign will be used in the Greater Los Angeles area to allow girls to go see the film via Girls, Inc. The organization works with girls considered at risk in Title 1 schools in Los Angeles.

Which is why @WHSorg has launched the #CaptainMarvelChallenge to take girls to see the film.https://t.co/Zm0VKAhhlO

Every girl deserves to know she can be anything she wants to be — including a superhero. #CaptainMarvelChallenge https://t.co/h70BJO4N9R

The GoFundMe page, which you can donate to here, reads,

“Everyone should have an opportunity to see women in roles they can aspire to one day be, roles that show women as strong, smart and bold. From a teacher to a fighter pilot—or a superhero. This is an opportunity to continue to empower girls to be just that. Marvel Studios’ first female-led film, Captain Marvel offers this type of important representation. We want to help girls from various backgrounds have the opportunity to see the film by providing tickets and renting out theaters.”

You can donate to the film at their GoFundMe page, and spread the word on social media. Captain Marvel has the potential to be a real cultural moment, and young girls everywhere deserve to be inspired.