The annual AdvoCare Invitational Men’s Basketball Tournament is scheduled to kick-off over Thanksgiving weekend at Walt Disney World. This year’s tournament will be even extra-magical as three of the eight teams are ranked in the NCAA men’s basketball pre-season poll.

Ranked, 2018 NCAA National Champion Villanova will play in the AdvoCare Invitational along with Florida State, and Louisiana State University who are also ranked. The other five teams participating in the tournament are Alabama-Birmingham, Canisius College, College of Charleston, Memphis and Oklahoma State. 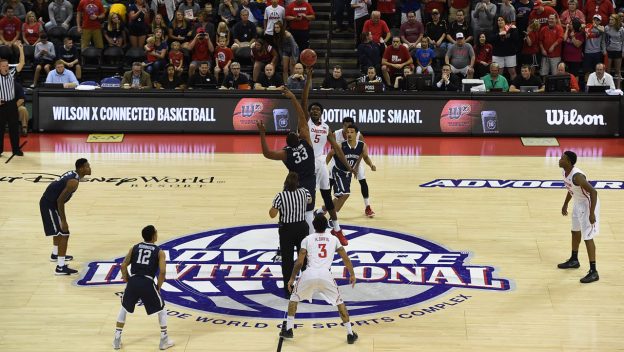 Tickets for the AdvoCare Challenge are currently on sale. If you have plans to visit Walt Disney World around Thanksgiving, this is the perfect way to take a ride on Slinky Dog at Toy Story Land and Flight of Passage at Pandora – The World of Avatar while catching what many college basketball experts are calling one of the most competitive preseason tournaments in the nation.

The AdvoCare Invitational is held at the ESPN Wide World of Sports Complex. CLICK HERE to purchase tickets.

Will you be attending this year’s AdvoCare Invitational? Let us know in the comments below!

It’s not too late to start planning your holiday-time visit to Walt Disney World! There are even some great discounts still available! Fill out the form below or send an email to Holly@MickeyTravels.com. As an agent with MickeyTravels (a Platinum Earmarked Agency), I will be on hand to help you with everything from finding your perfect package to nabbing those hard-to-get dining and FastPass reservations. I work with all Disney Destinations. Best of all, my services are absolutely FREE. Get in touch via email at Holly@MickeyTravels.com or calling 954.401.9577. Also, make sure to CLICK HERE to follow along with my Facebook page for all things Disney and giveaways!