6 Reasons to Eat at Planet Hollywood in Disney Springs

You know where Disney Springs is, and that’s half the battle. You board a boat or a bus that says it’s going to Disney Springs. That part’s easy. Once you exit, you’ll head to Town Center, one of the themed areas of the entertainment complex. From there, you should have no problem finding the building. It’s the one that looks like a giant observatory! It’s across from Coca-Cola Store and also facing the dine-in section of the AMC Disney Springs 24. It’s right in the heart of the action at Disney Springs. 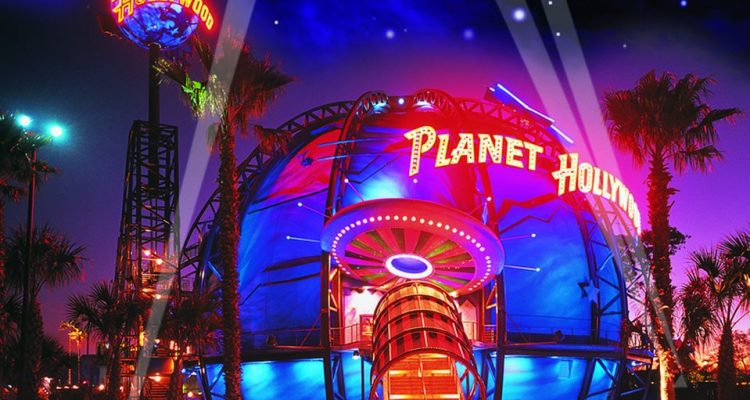 Most people know what Planet Hollywood is. I won’t go into great detail about the concept. At this restaurant chain, you’ll enter the building and immediately feel inundated with Hollywood memorabilia. Before you’re fully in the building, you can already see authentic Spider-Man, Superman and Chewbacca costumes plus a model of the Starship Enterprise. There’s a life-size R2-D2 on display, too.

Throughout the restaurant, you’ll see more of the same. The “theme” here is a series of movie props. If you want to look at Dillon Panthers football jerseys or The Riddler’s outfit from Batman Forever, you should prioritize this restaurant more. If you’re not much of a pop culture fan, you’ll mainly eat here for the last reason in this article and the glow drinks, colorful alcoholic beverages that pack a punch. I’m not much of a drinker, so I didn’t add a special section for them. You can think of them as a seventh reason that was outside of the writer’s area of expertise. 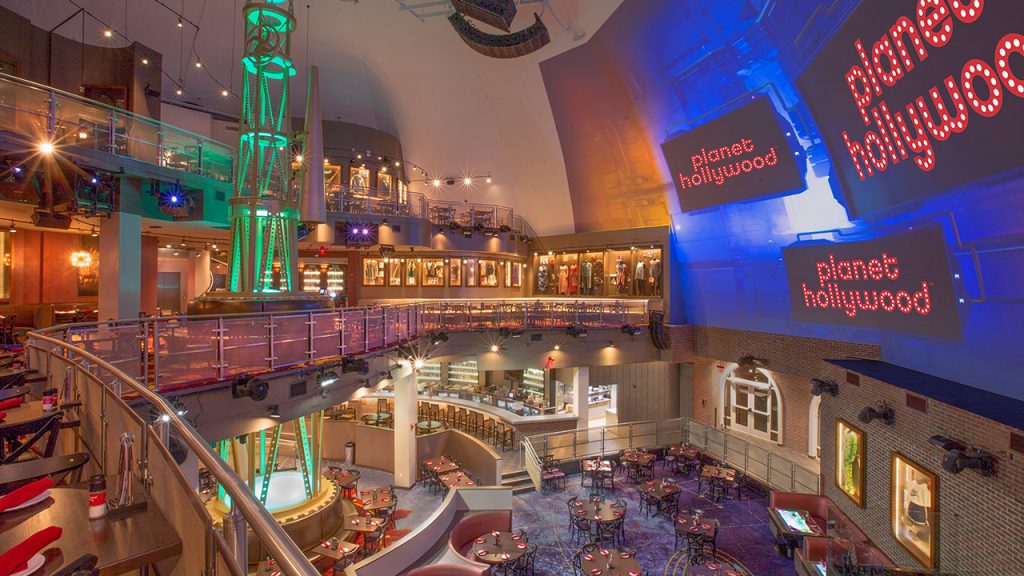 The name, Planet Hollywood, indicates an aspect of the restaurant that the theme had never offered until recently. It seems interplanetary in nature, a nod to humanity’s place in the solar system. While the structure of the Disney Springs location had previously possessed an orbital style, it was a one-off. The exterior failed to aptly reflect astronomy.

During 2016, Planet Hollywood in Disney Springs closed down in order to renovate. While they redid much of the interior, the most fascinating change transpired outside. This fictional planetarium added an observatory. This new section is the interior roof of the building. It’s now a projection area, a ginormous digital display with multiple “televisions” showing the same thing. Generally, it’s a music video or something similarly thematic. 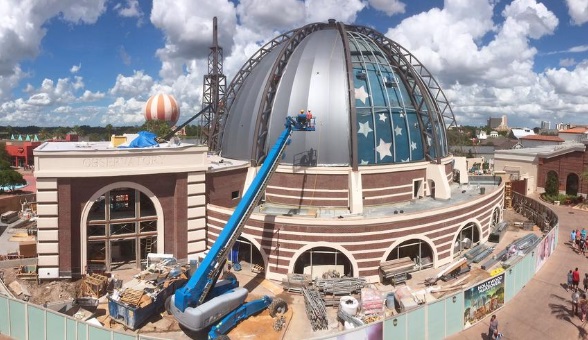 The view is extremely impressive. It’s like a restaurant combined with an IMAX theater. Just to be clear, the “Observatory” isn’t functional, though. The roof of this restaurant doesn’t open, and it’s not transparent. You won’t be able to see the night’s sky from this particular planetarium. Instead, you’ll see tons of pop culture projected onto the walls, which you might enjoy more anyway.

One of the strongest selling points of any Planet Hollywood is the live entertainment offered. Depending on the size of the venue and the city where the restaurant is located, the schedule for Planet Hollywood falls somewhere between solid and shockingly great. 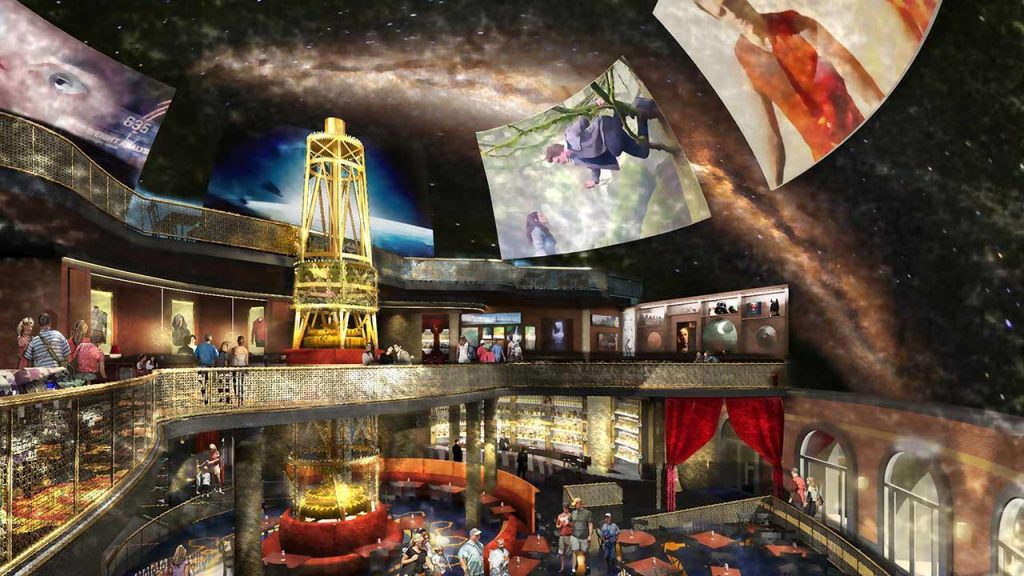 The official site lists live entertainment from 7 p.m. to 11 p.m. nightly. You shouldn’t expect a lot of famous bands that you know, but the local bands in the Central Florida area are really, really good. Many of them want to be performers at Universal Resort Orlando or Walt Disney World, and so they work hard at their craft. Plus, the music is free. As long as you don’t hate loud noises while you eat, it’s a nice bonus…and if you do hate loud noises, Disney Springs after dark probably isn’t for you anyway.

The Foods with Silly Names

Like many Disney Springs establishments, the menu at Planet Hollywood is extensive. With so much competition in the area, each restaurant seeks to appeal to consumers, knowing that larger groups will need to compromise. You’ll see nine appetizers, six distinct salads, nine different burgers and sandwiches, and ten pasta/grill specialties on the menu. If you can’t find something to eat here, you ain’t hungry. 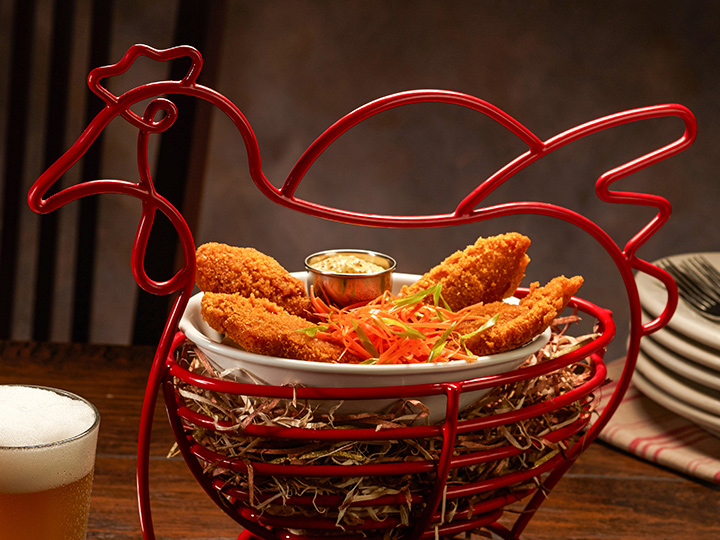 Planet Hollywood adds a touch of splice to their menu to liven it up. Well, fans of the movie Office Space might describe it as “flair,” but the idea is the same. Rather than eat a standard cheeseburger, you’ll order the Plain Jane. You can get a veggie burger here, too, but you’ll have to call it Morgan’s Veggie. Even the chicken and turkey meals have silly (some might say stupid) names like Bird Is the Word and Turkey Pic-A-Nic.

The quality of the food is up for debate. On TripAdvisor, Planet Hollywood is only ranked #648 out of 2,983 restaurants in Orlando. By Disney standards, that’s admittedly lousy. The important caveat is that 70 percent of those reviews are for the old Planet Hollywood menu, which is no longer available. Since the renovations and new menu, reviews are substantially better. It’s not The BOATHOUSE or anything, but the food is also cheaper. Guy Fieri had a hand in the new menu, which you may or may not see as a positive. Realistically, you’re eating here for the atmosphere, the theming, and the desserts, though. Speaking of which…

Planet Hollywood sells desserts that they call Star Jars. I don’t know how to describe these other than to say that did you know that desserts can be several different desserts? Like, ram together three desserts that you like in a cup, and you have a Star Jar. It’s somehow a dessert made up of several other desserts. It’s like a dessert-squared or maybe a dessert-cubed. 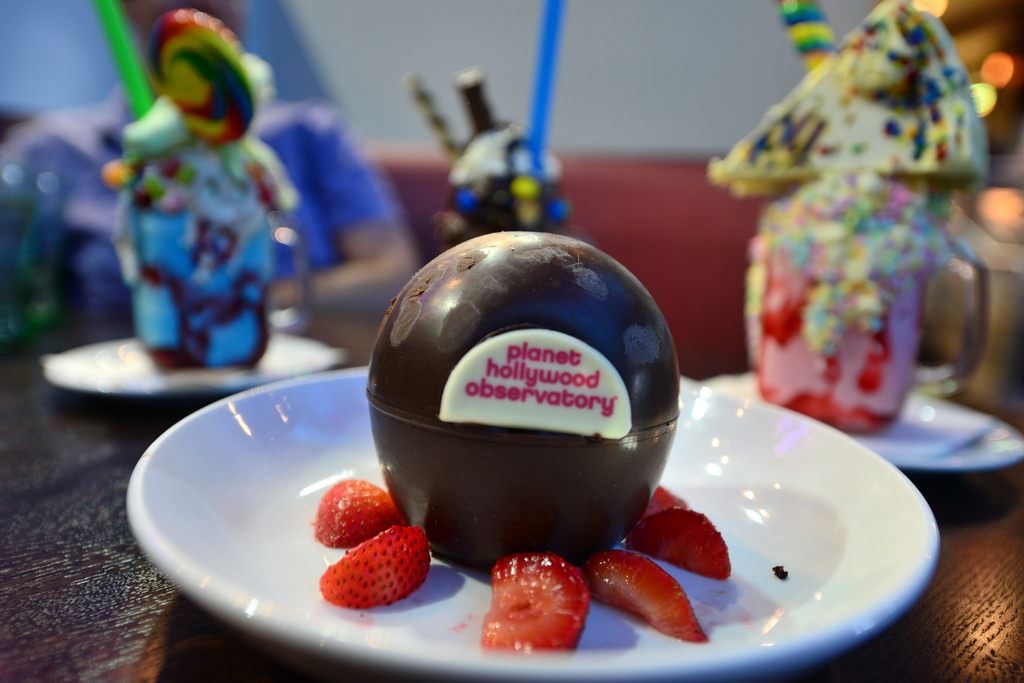 Here, let me start over again. Did you know that cake isn’t dessert on its own? Not at Planet Hollywood! At this place, cake is just the topping that completes the milkshake. I’m going to say that again because I’m certain you are dubious about this.

At Planet Hollywood, they serve a milkshake in a mason jar. The “seal” at the top of the Mason jar is a slice of cake. I have a team of mathematicians from Cal Tech calculating the calorie count for this dish as we speak. Don’t worry, though! Everyone knows that calories don’t count on vacation, right?! 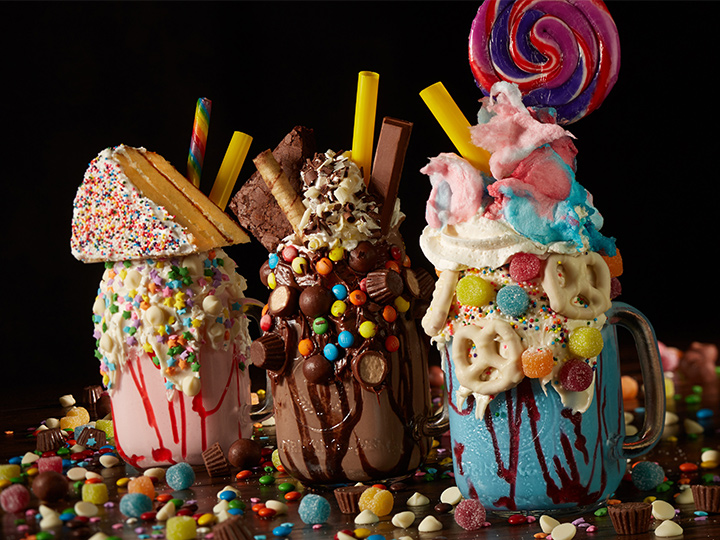 You may have little interest in eating at Planet Hollywood otherwise. It’s a shameless rip-off of a different restaurant chain, after all. Still, you should make an exception for the desserts. Even by Walt Disney World standards, they’re over the top in the best possible way.