It’s official, March Madness has officially tipped off! For me, the NCAA tournament’s annual return always brings with it hours upon hours of nerve racking game watching as I try my best to (not) throw household objects at the TV when my team gets eliminated. My bracket has been submitted and although I’m not a college basketball fan and have no basis for my picks, I’m always certain the team with the best-looking uniforms and most inventive names will win. Perhaps that’s why I’m always eliminated after round 2.

This year, I think I’ll take a break from my obsessive March Madness watching and forget about my bracket; maybe it’ll be the key to my success! Instead, I plan to fill the void with a fun new game just announced by D23. In celebration of March Madness and its many fans, Disney created several of their own spinoffs of the popular basketball tournament. By pitting characters and the beloved songs they sing against each other in an ultimate D23 March Hare Mania, you’re invited to make this March one to remember! 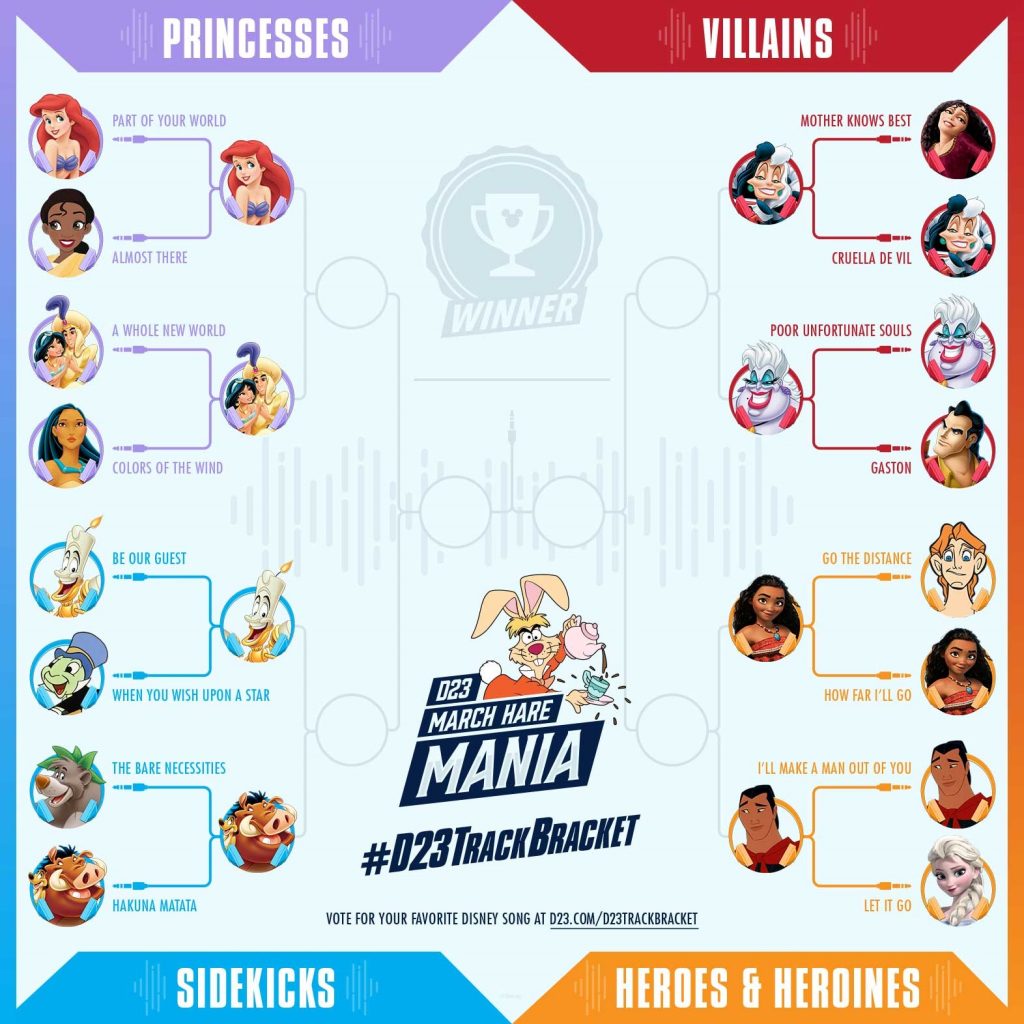 The game is simple, but you’ll need a few important prerequisites. You can do what I do for my basketball bracket and vote based on looks and titles, but that’s not really any fun and has never gotten me very far! Here’s what you’ll need in order to play:

Okay, now that you know what you’ll need, let’s get you into the game! What is your favorite Disney song that you can’t help but singing along with whenever you hear it play? Is it a brassy Villan theme like “Cruella de Ville”? How about a classic ‘I want’ song like “Part of Your Wolrd”? Let’s face it, who can resist singing along to “I’ll Make a Man Out of You”? I can’t choose which is my favorite! But choices must be made, and votes must be cast to determine an ultimate champion. Ready to get started?

At the bottom of the article, there is a link you’ll need to follow in order to start playing, and the rules are simple. Four sections of the bracket make up 4 themed categories for the characters and their corresponding songs. For example: the Princess category features a photo of Pocahontas and reads “Colors of the Wind”. In round 1, you’ll be able to choose between “Colors of the Wind” and “A Whole New World” to determine who moves on, and who goes home!

Other categories are Villains, Sidekicks, and Heroes and Heroines and boast big threats like Ursula, Elsa, and Moana. To say that one category is more stacked than another is impossible, especially considering the strength of the contenders in each bracket! In total, there will be 3 rounds before the final two contenders are determined. Who is your favorite to win?

I’m not ashamed to admit I know the lyrics to every single song on the list. If you need to brush up on your Disney lyrics before casting your vote, you should take this fun quiz as a refresher! ->   https://d23.com/test-your-disney-song-knowledge-with-our-disney-track-trivia-quiz/

Music to My Ears!

If you’ll be around the parks during the tournament, you can hear many of the songs in the tournament while you’re out exploring! Even if you know them all by heart, everyone can benefit from a refresher! Here are the spots you can hear the tunes around Walt Disney World Resort:

Now that you’ve got the run-down on how the game works, the only thing left for you to do is follow the link and get to voting!

Who are you rooting for to take home the ultimate win? Let us know in the comments below!