You’ve seen his Star Wars, Matrix, Marvel, and Tron: Legacy deepfakes; soon, a lot more of his work may be on display…

I’ll admit it. There was one little but significant portion of The Mandalorian Season 2 finale that was disappointing.

Luke’s face was distracting. There. I said it.

Of course, I am not alone in that opinion.

Fans were treated to a pretty upsetting sight during the Season 2 finale of “The Mandalorian,” in the form of a CGI version of Luke Skywalker.

This is something Disney has done in “Star Wars” a couple times before, back in 2016’s “Rogue One” and in last year’s “The Rise of Skywalker.” In “Rogue One,” we got CGI versions of Grand Moff Tarkin, who had a significant role, and Leia, who was just a cameo at the very end. And in “The Rise of Skywalker,” we got another glimpse at CGI Leia and CGI Luke in a flashback to when Luke trained her as a Jedi.

All of those examples were met with general derision because they looked weird. All CGI faces do…

Yes, although I LOVED the moment — all of those moments, in fact — it (and they) looked weird.

However, one guy has led a campaign to help out, and I have written about him several times.

“Shamook” is the name. Deepfake is the game.

You get the point. And so did Lucasfilm. They hired the guy.

A popular deepfake YouTuber who goes by the name “Shamook” announced this month in the comments section of one of his videos that he joined the team over at Lucasfilm’s Industrial Light and Magic. IndieWire has now confirmed the hiring with Lucasfilm.

And Sharf quoted a Lucasfilm rep as saying, “[Industrial Light and Magic is] always on the lookout for talented artists and have in fact hired the artist that goes by the online persona ‘Shamook’… Over the past several years, ILM has been investing in both machine learning and A.I. as a means to produce compelling visual effects work, and it’s been terrific to see momentum building in this space as the technology advances.”

Of course, Shamook spoke for himself.

“As some of you may already know, I joined ILM/Lucasfilm a few months ago and haven’t had the time to work on any new YouTube content,” Shamook wrote in a comment this month. “Now I’ve settled into my job, uploads should start increasing again. They’ll still be slow, but hopefully not months apart. Enjoy!”

Apparently, we’ll learn even more about the whole process soon. On August 25, a special episode of “Disney Gallery: The Mandalorian” will explore Luke’s return in the Season 2 finale.

Disney+ explained, “Reaction to the episode was emotionally charged for many, deeply resonating with generations of fans who were elated to see the Jedi Master in his post-Return of the Jedi prime. The story of the cutting-edge technology used to bring Luke back is the subject of a special extra episode of “Disney Gallery: Star Wars: The Mandalorian,” debuting August 25 on Disney+. 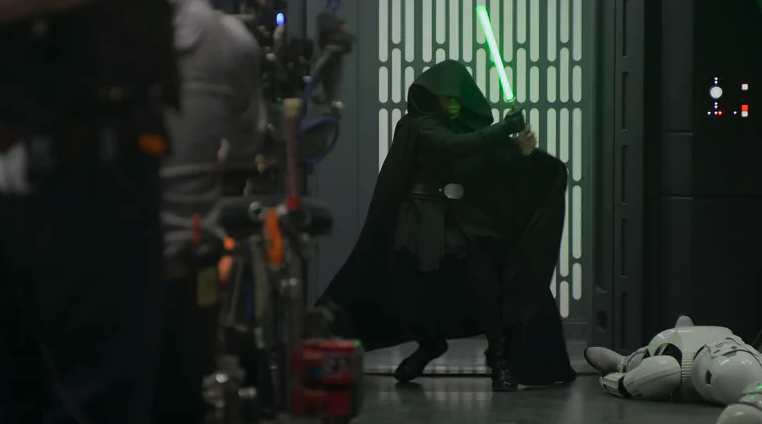