If you’re thinking about having a family movie night tonight we’ve got the perfect suggestion. Head over to Disney+ were you’ll find the iconic Disney film, The Little Mermaid. Can you believe it’s been 30 years since the film first splashed into theaters!

To celebrate, our friends over at Disney’s official fan club- D23, have provided us with some awesome Little Mermaid fun facts that will give you super fan status in no time!

Check it out here:

Let’s do a quick recap of the five awesome “Thingama Facts” we just learned:

1.Mickey, Goofy and Donald Easter Egg – If you like wowing your friend with film details here’s a Little Mermaid Easter Egg to try on for size. When King Triton makes his grand entrance in the film, look closely at the crowd and get ready to hit pause. Both Goofy and Donald are in there somewhere!

2. Look Closely While on Prince Eric’s Ship-  When you get to the scene aboard the ship look quickly into the crowd. Anyone look familiar? Yes! It’s the King & Duke from Cinderella! 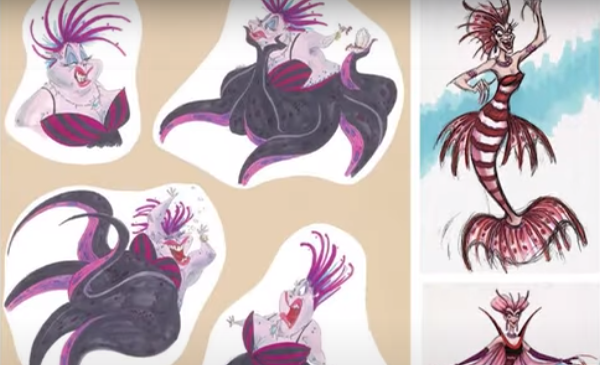 3. Ursula Was Almost A Manta Ray!? In the film, we can’t imagine nefarious Disney baddie Ursula being anything other than a slimy slithering octopus. But did you know that Ursula went through many incarnations while the project was being developed? This includes a manta-ray, sea mollusc and even a scorpionfish!

4. Pinocchio Inspired a Few Elements From The Film- When the story of The Little Mermaid was being developed, Sebastian was created as a sort of reluctant Jiminy Cricket. The video also tells us that when animators were working on the stormy sea sequence for the end of the film, they drew their inspiration from the Monstro scene in Pinocchio!

5. Do You Know How To Tell Flotsam and Jetsam Apart!? –  If you’ve ever wondered how to tell the difference between Ursula’s two eel companions the clue is that it’s all in the eyes! Flotsam’s yellow eye is on the right and Jetsam’s is on the left!

Bonus:  No “Little” Feat.  It took Animator’s three years to work on The Little Mermaid and they used over a thousand different colours, 1,110 backgrounds and nearly 150,000 painted cells to bring this undersea world to life!

So start streaming The Little Mermaid on Disney+ and wow your family with your Disney knowledge! Readers are also encouraged to keep following along with MickeyBlog for the latest Disney-related news and updates!