ABC’s Home Economics Kicks Off Its Third Season at Disneyland

We’ve got some exciting news for fans of Home Economics on ABC.  Disney has just announced that the third season of the series will kick off with a visit to Disneyland Resort in California!

For those unfamiliar, the sitcom takes a look at the heartwarming yet super uncomfortable and often frustrating relationship between three adult siblings.  Starring in the series is Topher Grace as Tom, Caitlin McGee as Sarah, Jimmy Tatro as Connor, Karla Souza as Marina, and Sasheer Zamata as Denise. 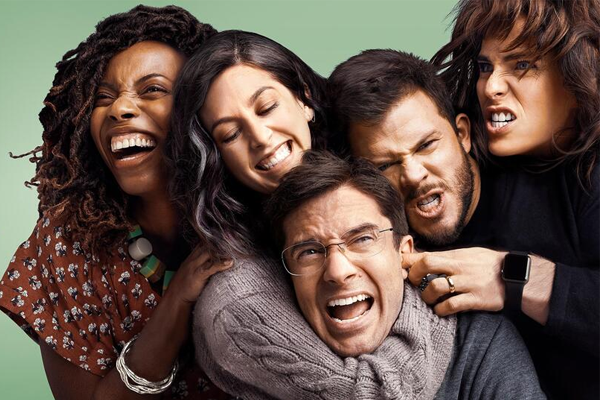 Those turning into the Season 3 premiere are certain to see a lot of familiar sights and sounds! Connor has a hidden agenda and thinks Disneyland is the perfect place to reveal to Tom the secrete from last season’s finale.  He IS the Dutch investor who purchased the company that is publishing Tom’s book.  Connor knows that his brother won’t take kindly to the fact that his younger brother is now his boss and thinks the perfect way to take of the edge is with a visit to Galaxy’s Edge!

Check out some Disneyland footage from the upcoming episode below:

The cast was able to ride beloved Disneyland attractions both during filming and in their spare time.  They were seen on Millennium Falcon: Smugglers Run, Big Thunder Mountain Railroad, Incredicoaster, and Mad Tea Party, as well as meet Mickey Mouse, Chewbacca, R2-D2, Iron Man, and Spider-Man.

They also had a chance to try out some of Disneyland’s incredible eats and treats including churros, DOLE Whips, turkey legs, corn dogs, candy apples and popcorn.

Don’t miss the Season 3 Premiere of “Home Economics” TOMORROW at 9:30/8:30c on ABC and the next day on Hulu!  Readers are encouraged to keep following along with MickeyBlog for further Walt Disney World news and updates. We’ll be coming to you LIVE! from the theme parks each and every week.