Okay, D23’s most significant panel occurs on Sunday. So, we’re switching things up a bit at MickeyBlog. 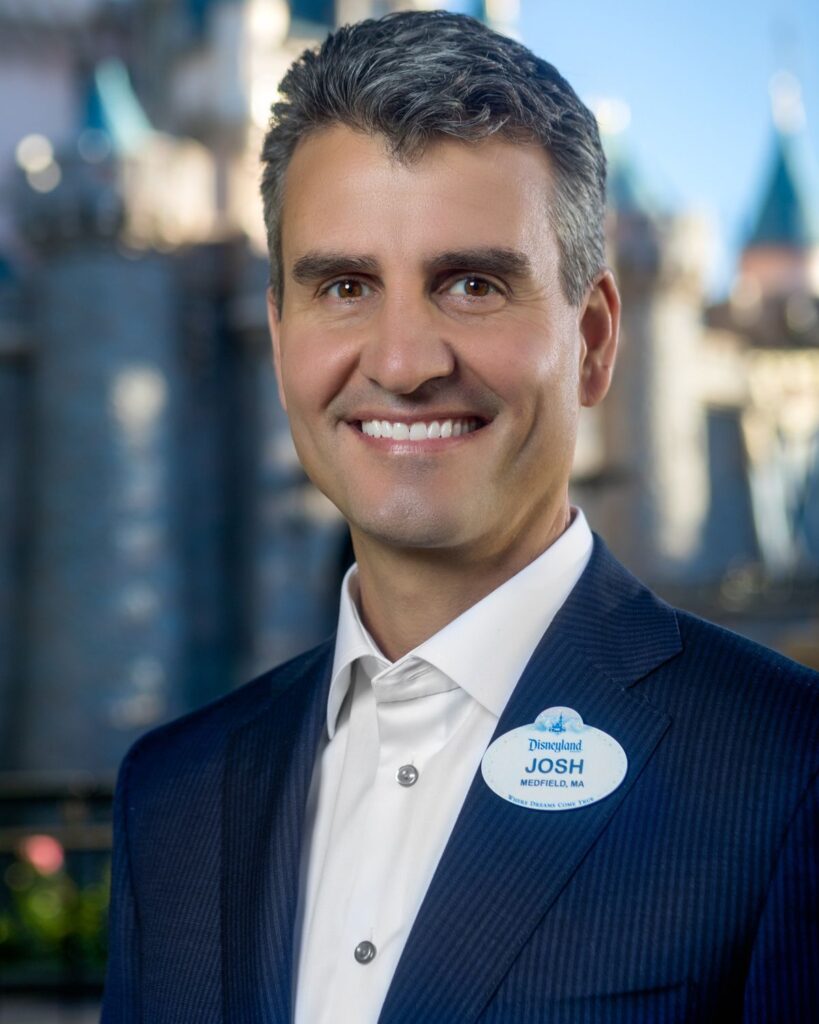 The D23 Expo occurs in Anaheim, the backyard of the Happiest Place on Earth. As such, we shouldn’t be surprised that many of the updates involve Disneyland. 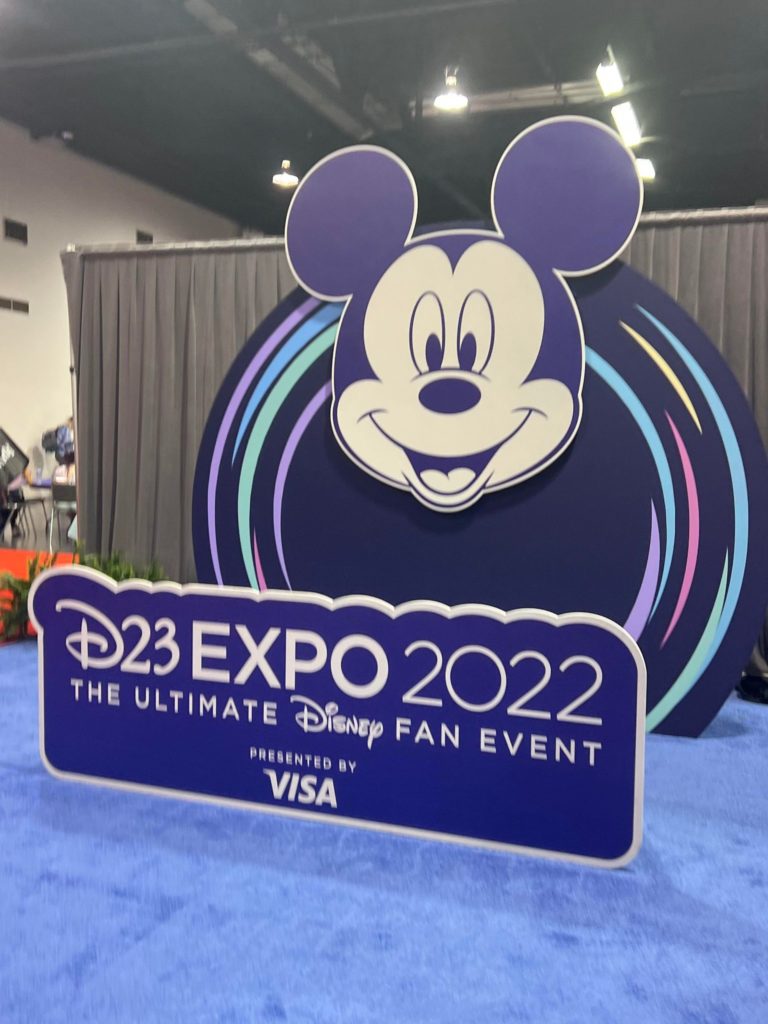 After all, we’re only roughly six months from the reopening of Mickey’s Toontown. So, Disney needs to talk about what’s coming next.

We’d already known that Mickey and Minnie’s Runaway Railway is coming to Disneyland in 2023. But what else will comprise the new Mickey’s Toontown?

At the #D23Expo, Disney shows off a model of the reimagined Mickey’s Toontown. The land’s executive producer tells Variety inclusivity is a top priority, with new sensory experiences and accessible attractions for children. pic.twitter.com/vFJsNxf1hF

Thankfully, a D23 scale model revealed many of the plans for this project.

For starters, Gadget’s Go Coaster has operated for the last time. In its place, Disney has (arguably) re-themed the attraction as Chip ‘n’ Dale’s Gadget Coaster.

We’d known this move was coming since February. We hadn’t known the new theme/name for the ride, though.

So, Chip ‘n’ Dale fans are in for a treat! The junior roller coaster will move away from a previous Chip ‘n’ Dale character, Gadget Hackwrench, to the main chipmunks. 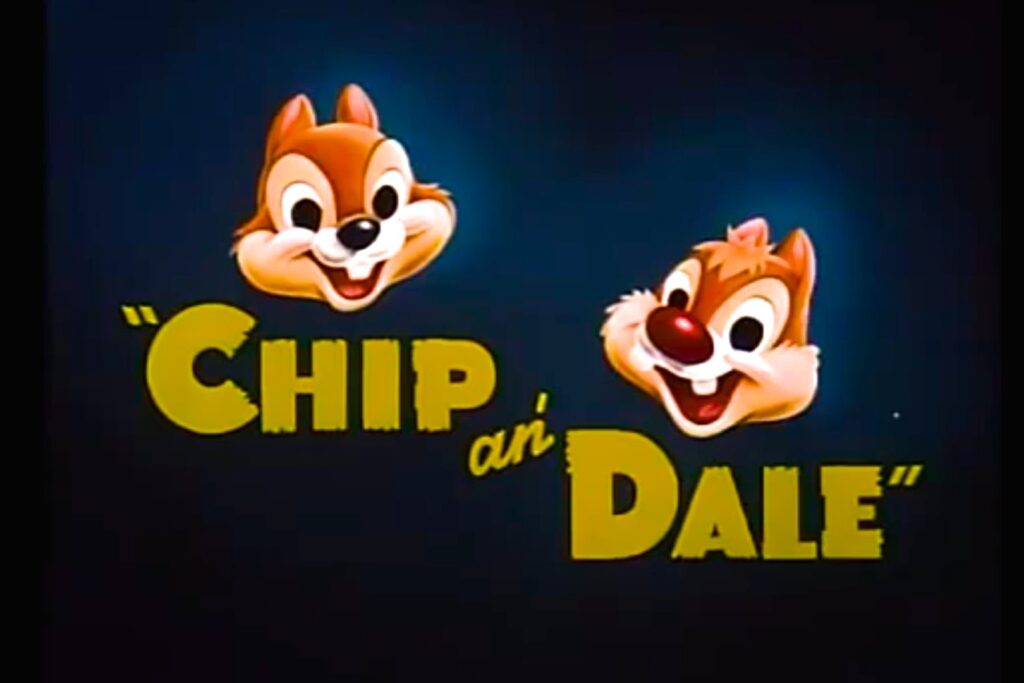 While Disney will never confirm the decision, I presume it’s because of a weird story about a Russian cult that worships her.

Yes, I’m serious. I’m not gonna link the details, but you can Google them if you’re curious. Understandably, Disney wants no part of that.

I should add that the new Mickey’s Toontown will keep its character houses. The roller coaster resides in the same area where Donald and Goofy live.

Disney’s scale model displays bright visuals that hint at a visually stimulating new version of the land. Two new restaurants are part of this themed land as well.

Disneyland Resort will also feature several other new updates. I covered the most exciting one yesterday. It’s the Marvel multiverse attraction coming to Avengers Campus. 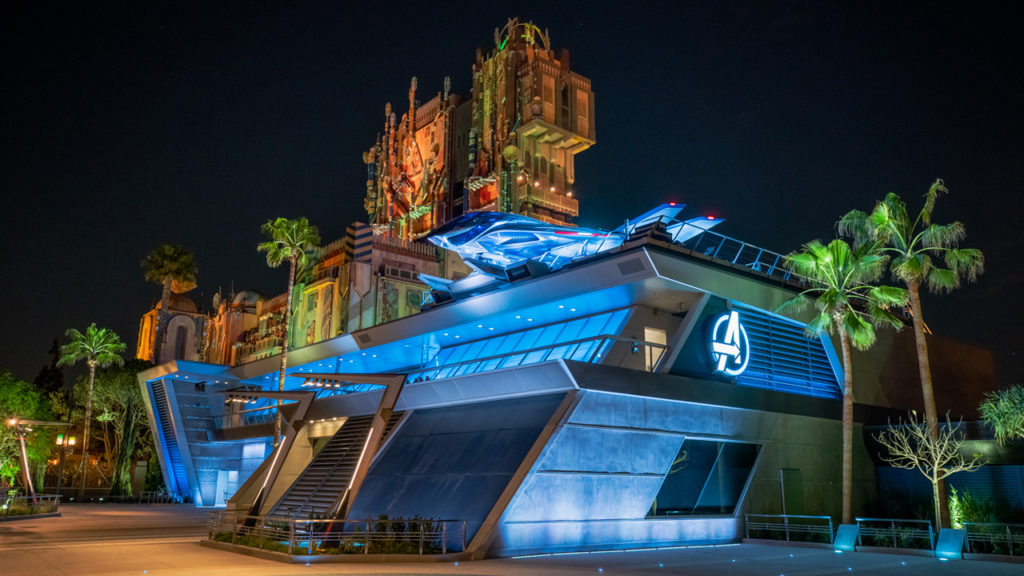 Disney has indicated that a unique experience will anchor this section of Avengers Campus.

Frankly, while the current two attractions are solid, they’re not true E-ticket attractions.

Guardians of the Galaxy – Mission: BREAKOUT! is a modified version of the Twilight Zone Tower of Terror. 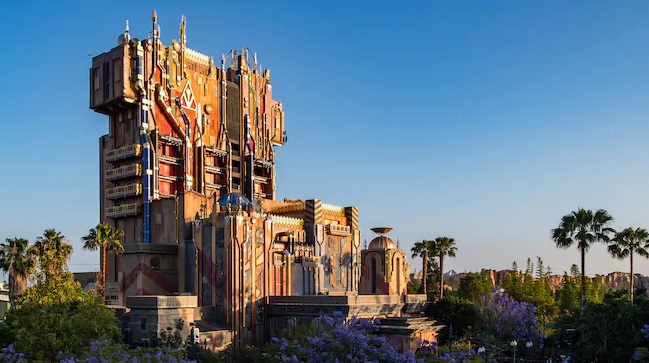 This new Avengers Campus will be a first, which means it’s not connected to Avengers Assemble: Flight Force, either. 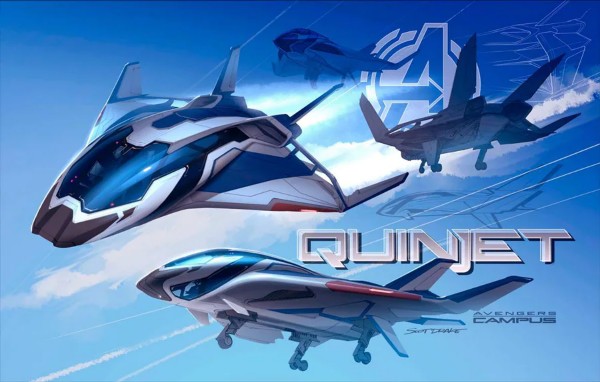 Disney will confirm the attraction’s details tomorrow. I presume that it’s the former Quinjet project that park officials previously canceled.

Presumably, Disney found the money in the budget for this expansion. That’s idle speculation, though. We won’t know for sure until tomorrow afternoon. 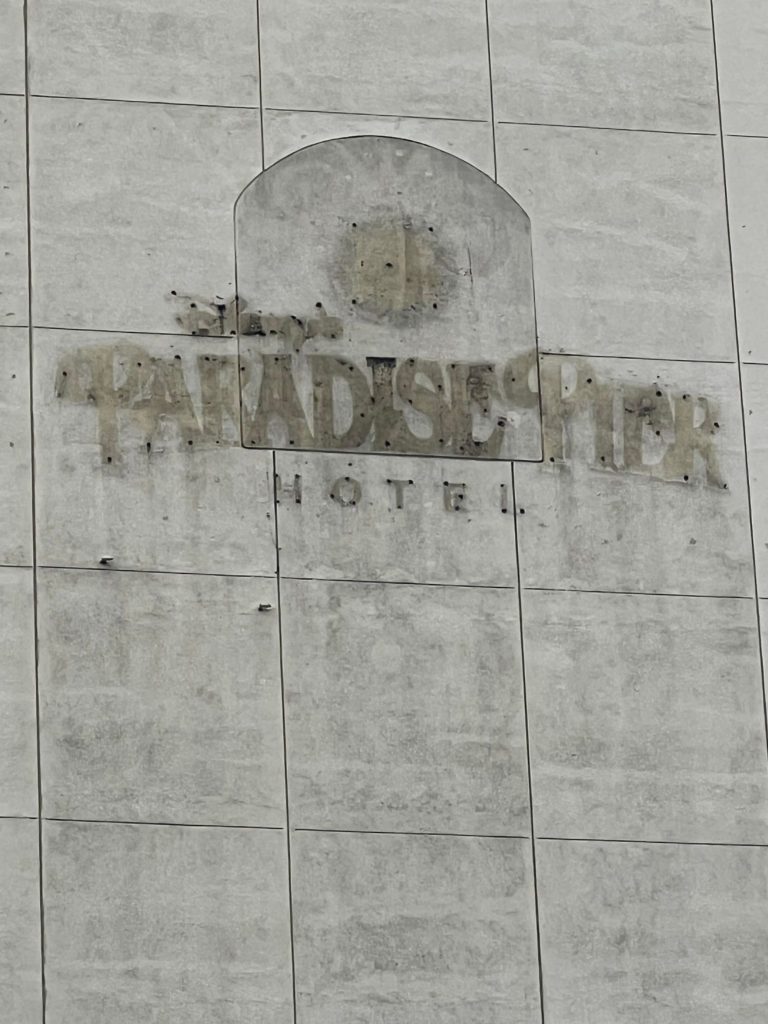 We do know of several other Disneyland Resort changes, though. For example, Disney’s Paradise Pier Hotel has removed its signage.

Disney will re-theme this resort to Pixar, and it’ll eventually get a new name, possibly as soon as this weekend. So, the old sign has come down. 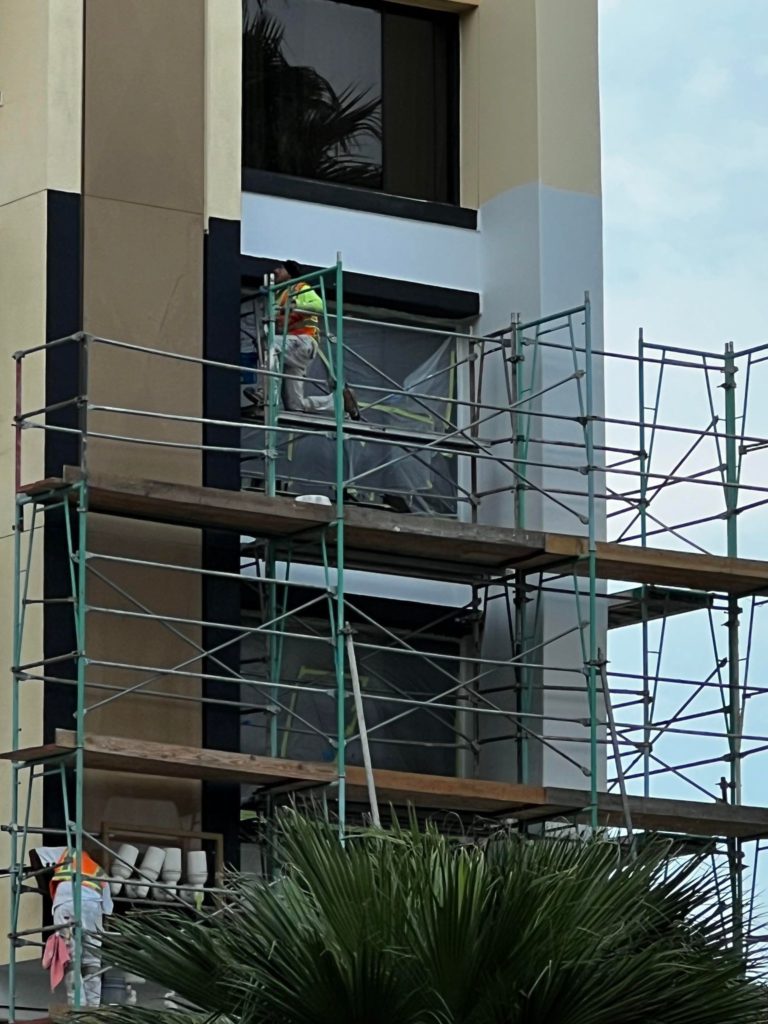 Right now, nobody knows the name of the hotel where they’re staying, which is pretty weird.

Speaking of hotels, management confirmed the name and logo of an upcoming project.

Naturally, people are wondering whether the hotel towers will also assume these colors. Either way, it’s a great logo.

I'm expecting an update on The Villas at Disneyland Hotel during #D23Expo. The resort is currently slated to open late 2023. pic.twitter.com/uKoFcdkbl2

We’re sure to hear more about this tomorrow, but Disney has revealed plenty about Tiana’s Bayou Adventure already.

Some of the scale models and other D23 displays reveal the look of the new attraction. 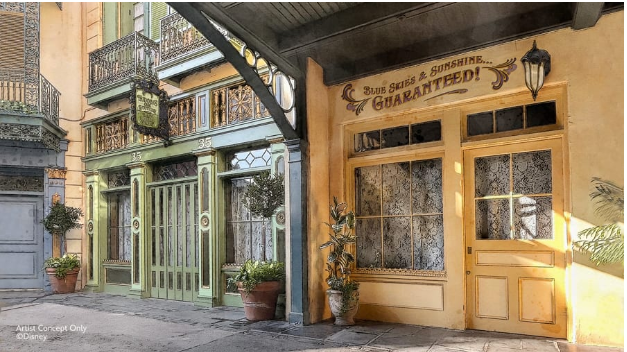 Notably, the Splash Mountain tree isn’t a part of this redesign. So, expect an outcry soon.

On the plus side, the theming emphasizes Tiana’s success as a chef. She’s now the proud owner of a giant storage silo called Tiana’s Foods, which appears to hold…water. 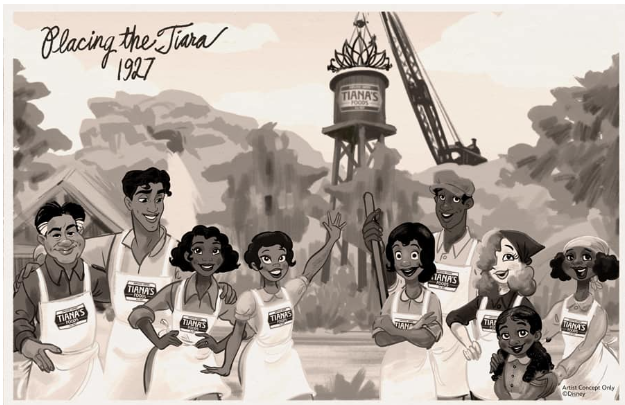 When you enter the mountain from now on, a welcoming sign states that it’s a place for “A Generation of Family and Friends of New Orleans,” which is lovely.

I recognize some of you are worrying that this new restaurant may replace an existing one. Thankfully, there’s no indication of that, at least not yet.

Generally speaking, I cannot think of a better combination than a Tiana restaurant at New Orleans Square.

Disney even took the name straight from the movie, The Princess and the Frog!

We’ve got so much going on this week that ordinarily significant stories seem less newsy. So, let’s quickly run through those. 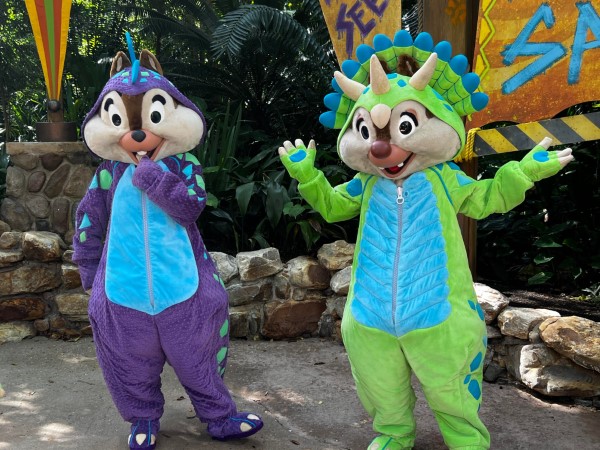 Yes, the dino character greeting is back! And yes, that means Donald and Daisy are meeting guests again at Donald’s Dino Bash, too. 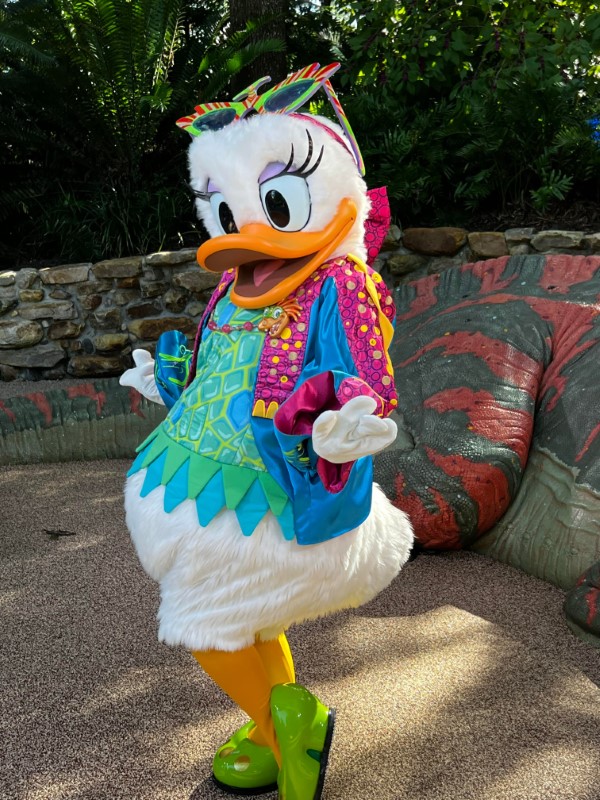 We also learned a bit more about Journey of Water Inspired by Moana. Images show a 16-foot-tall Te Fiti statue at the attraction. Here’s a picture:

Journey of Water will include a 16-foot Te Feti pic.twitter.com/4780nGdtAX

I’ll say what we’re all thinking. I’m terrified of that. But, seriously, it’s another masterpiece by those marvelous Imagineering geniuses.

In an unexpected development, EPCOT announced that The American Adventure will close indefinitely starting on September 19th. Expect it to be gone for at least a month, if not much longer. 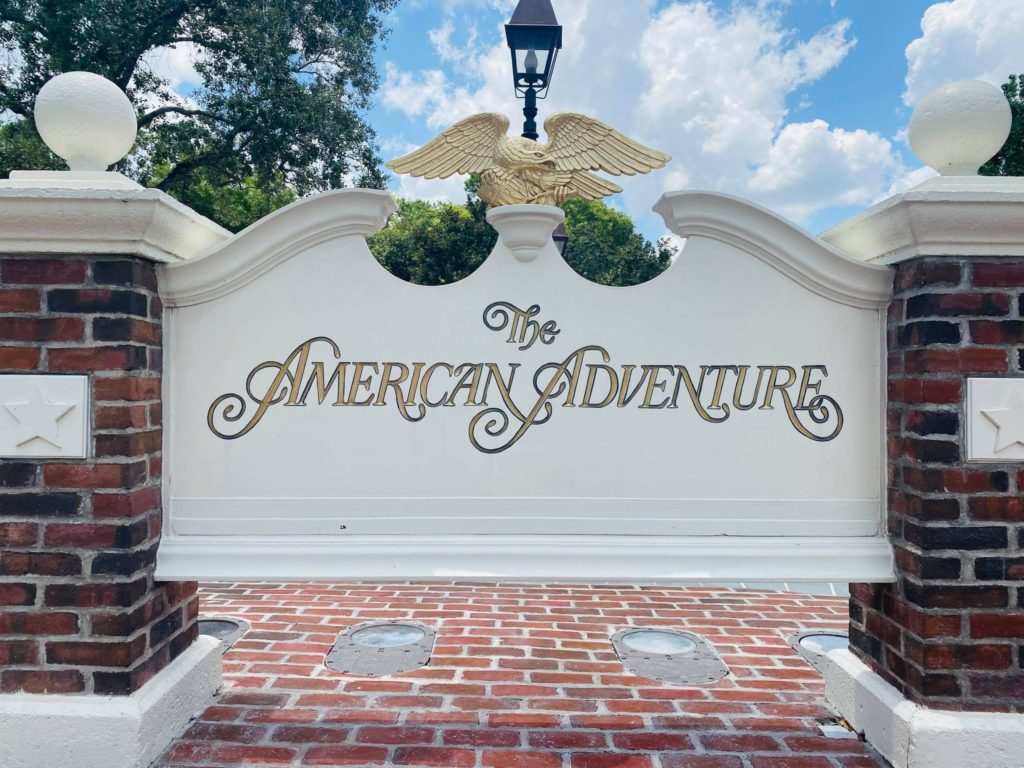 Meanwhile, the Play Disney Parks app has confirmed the impending arrival of DisneyMe. This function allows you to create a digital avatar within the app.

You can also change your avatar’s outfit. This is something I will literally never do. 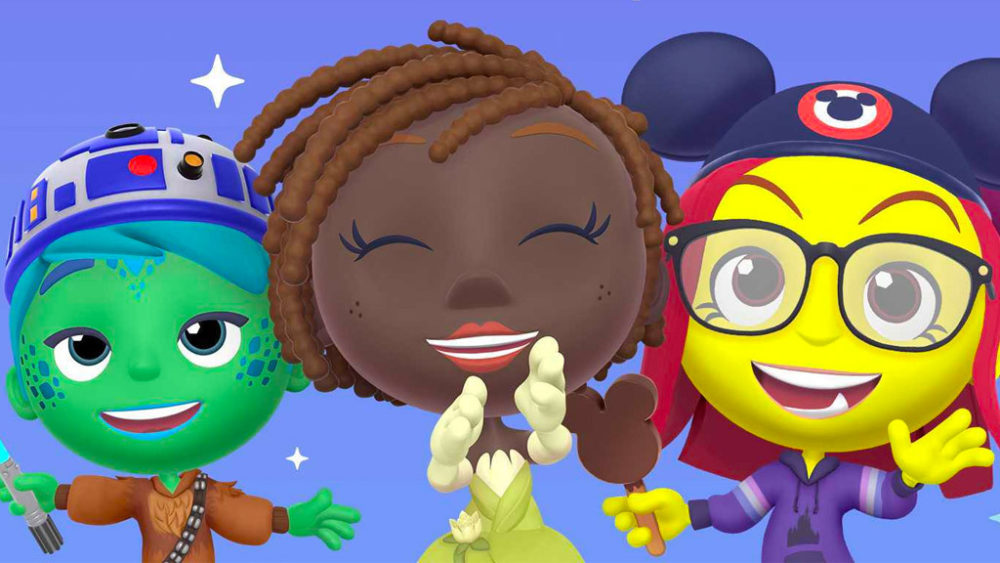 Conversely, my Animal Crossing-addicted wife will probably do this 72 times a day. Speaking of which, be on the lookout for a MickeyBlog Disney gaming update later today! 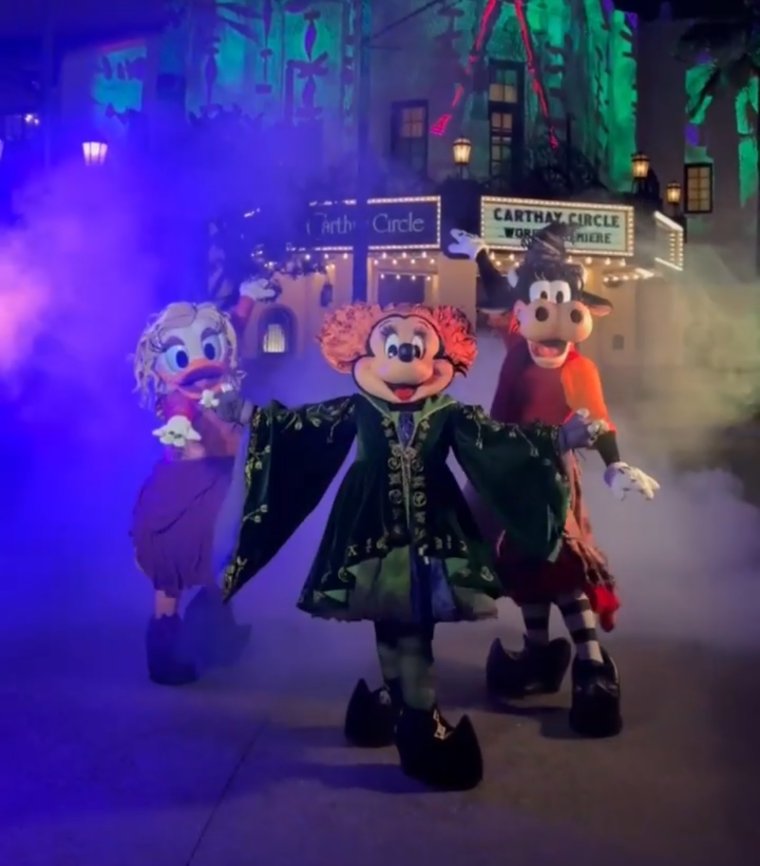 Minnie Mouse and her girlfriends, Daisy Duck and Clarabelle, are cosplaying as the Sanderson sisters!

You’ll also find them on Disney Cruise Line this Halloween season. Here’s a quick Instagram clip of their outfits. No other costume’s gonna top that!