Here Is Why I Prefer Monorail Resorts

I’ve mentioned this before, but it bears repeating. When I visit Walt Disney World, I prioritize a few resorts over the others.

Three of them reside on the monorail. In fact, on an upcoming visit, I’ll stay multiple nights at two of the locations I’m about to discuss.

I recognize that these options aren’t for everyone, but they work well for my family. Here are the benefits of staying at monorail resorts.

What Are Monorail Resorts?

Fans have coined this phrase to acknowledge three official Disney resorts residing on the monorail line. 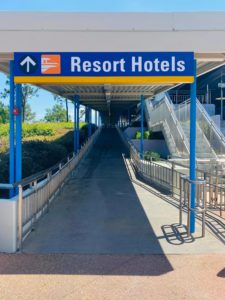 This system carries guests to Magic Kingdom and the Transportation and Ticket Center. However, it also includes stops at three different resorts. 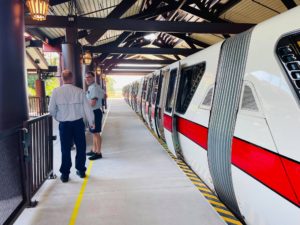 Each hotel includes a complete monorail station. At the Polynesian and Grand Floridian, you’ll find one on the second floor.

The first resort with a monorail station, the Contemporary, requires a trip to the fourth floor, the Grand Canyon Concourse. The monorail entrance is here. 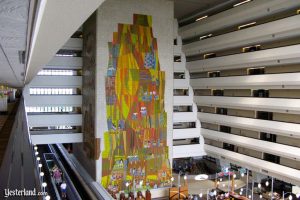 As I’ve gotten older, I’ve also gotten lazier. I no longer relish the idea of walking 15 miles a day at the parks.

In addition, I’ve gotten a bit crankier about Disney transportation. It seems like I’m always on the bus next to the person who hasn’t showered in a week. 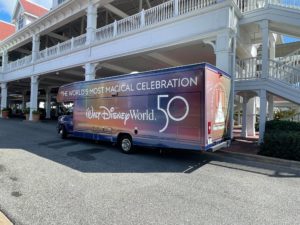 So, the logistics of monorail resorts put a smile on my face. They’re simply the best at Walt Disney World.

When you stay at one of these hotels, you can hop the monorail straight to Magic Kingdom! You’ll save yourself plenty of aggravation in the process. 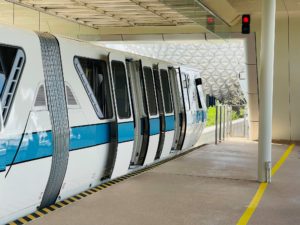 Even better, Disney has set up security clearance at these stations. So, you won’t have to go through it again at Magic Kingdom!

Then again, you may not be in the mood for a monorail ride. I cannot imagine anyone ever saying that, but some do. 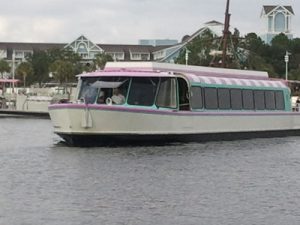 In such instances, you can ride one of the Friendship Boats to Magic Kingdom instead!

Disney provides many transportation options for monorail resort guests, which it should since they’re paying more than most guests. 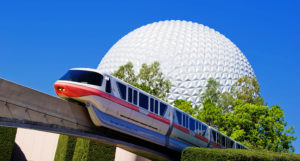 I’ve separated this section because it merits special mention. Those of you who don’t mind walking to the parks are in luck!

In 2021, Disney opened a new walking path at the Grand Floridian. By doing so, Disney made it possible for guests at all monorail resorts to walk to the park! 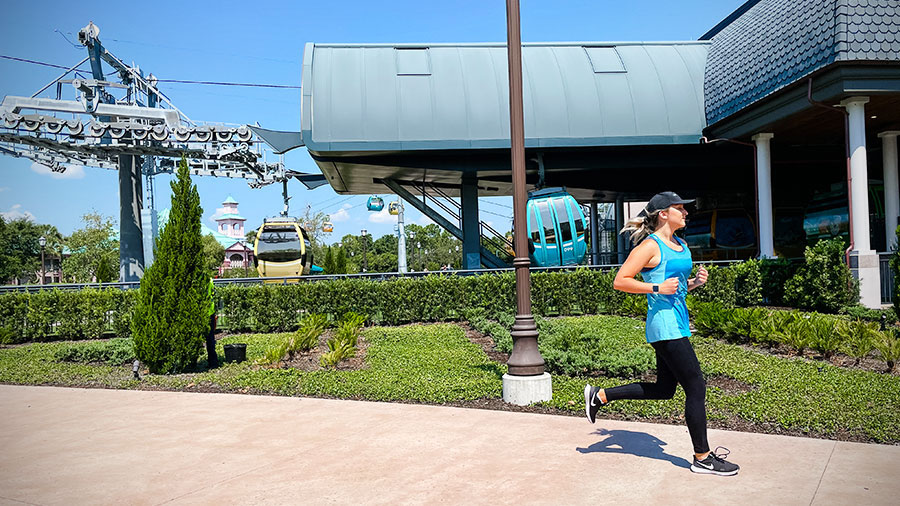 At the Contemporary, guests have enjoyed this option since opening day. It’s seriously only a ten-minute walk from the hotel lobby.

In fact, guests who stay at Bay Lake Tower can reach the park in five minutes if they hurry. I speak from experience here. It’s a jog, not a walk, though. The Grand Floridian’s walkway requires about a 15-minute walk, give or take five minutes depending on your speed.

Both options provide stunning views of the Magic Kingdom area, giving you a bonus reason to take this approach. Finally, while I don’t really recommend it, guests at the Polynesian can also walk to the park. First, you must take the path to the Grand Floridian.

From there, you’ll take that hotel’s walkway to the park. It’s about a 25- or 30-minute walk, though. 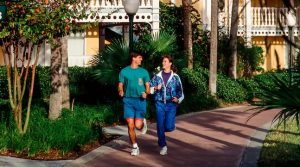 I’d only suggest on days when you’re not expecting to do much at the parks and don’t mind the extra exercise.

Since opening day, a pool at the Contemporary has overlooked Bay Lake. Now, it’s one of the most majestic places to hang out during your vacation. 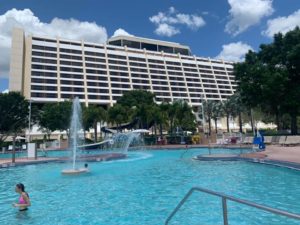 Somehow, that’s not my favorite hotel pool, though. Bay Lake Tower operates an intimate one with a Hidden Mickey design, a terrific play area, and a euphoria-inducing water slide.

At the Polynesian, the legendary Lava Pool recently received some upgrades, making it that much better. It, too, offers a view of the nearby shore and the hotel’s Bungalows. 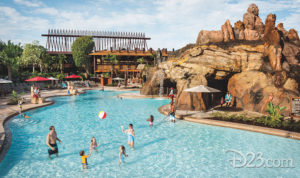 Then, there’s the main pool at the Grand Floridian. It’s brimming with Victorian luxury but also a joy for kids of all ages.

While you’re at the Grand Floridian, you should also mosey over to the Mad Hatter play area.

The oversized novelty hat here works on a clever cycle. Water pours into the hat until such a time as it cannot handle more. At that point, it flips out, dousing the thrilled fans standing beneath it!

Since you’re staying so close to the parks, you’ll spend plenty of time there.

However, you’ll want to build time into your schedule to swim and sunbathe! Otherwise, you’re missing out on one of the best parts of a monorail resort. 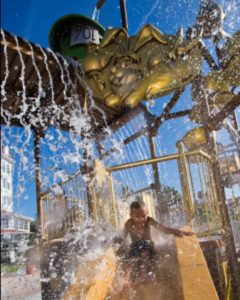 Fans of the Polynesian just started smiling and cannot even explain why.

Disney famously pumps scents into its various resort lobbies. Some of them smell so good that the memory lingers afterward. 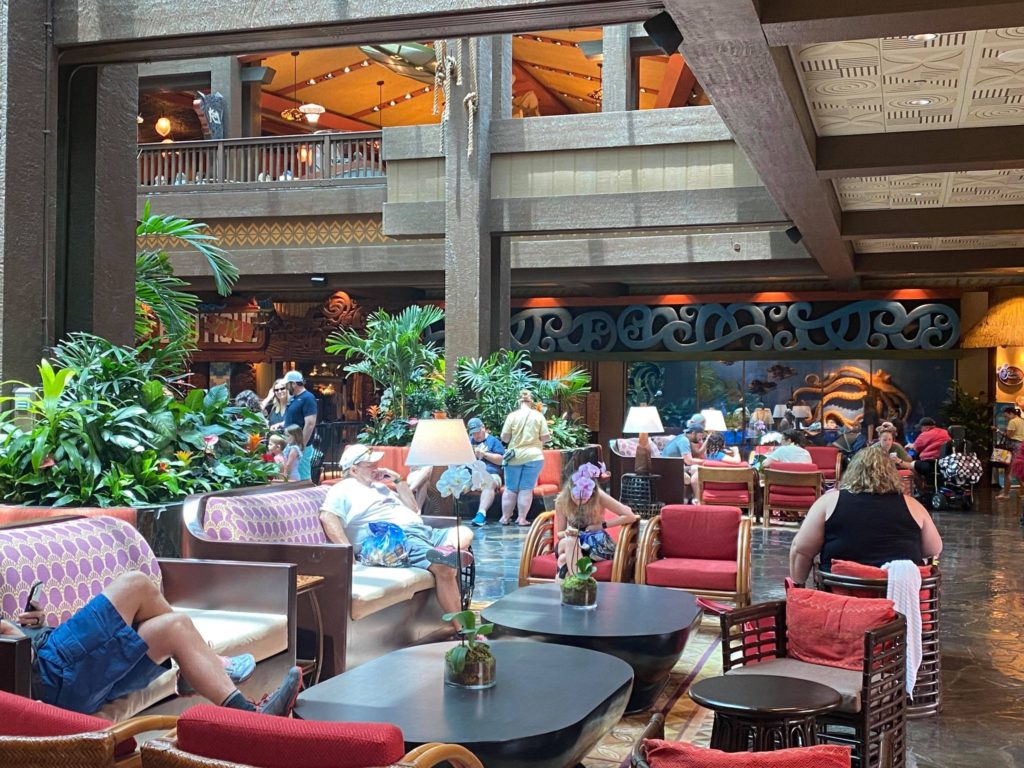 I own several Polynesian fragrance candles just to recreate that aroma. Similarly, I purchased a Contemporary scented air freshener just this morning.

People wouldn’t do that unless the sensory overload was spectacular, right? 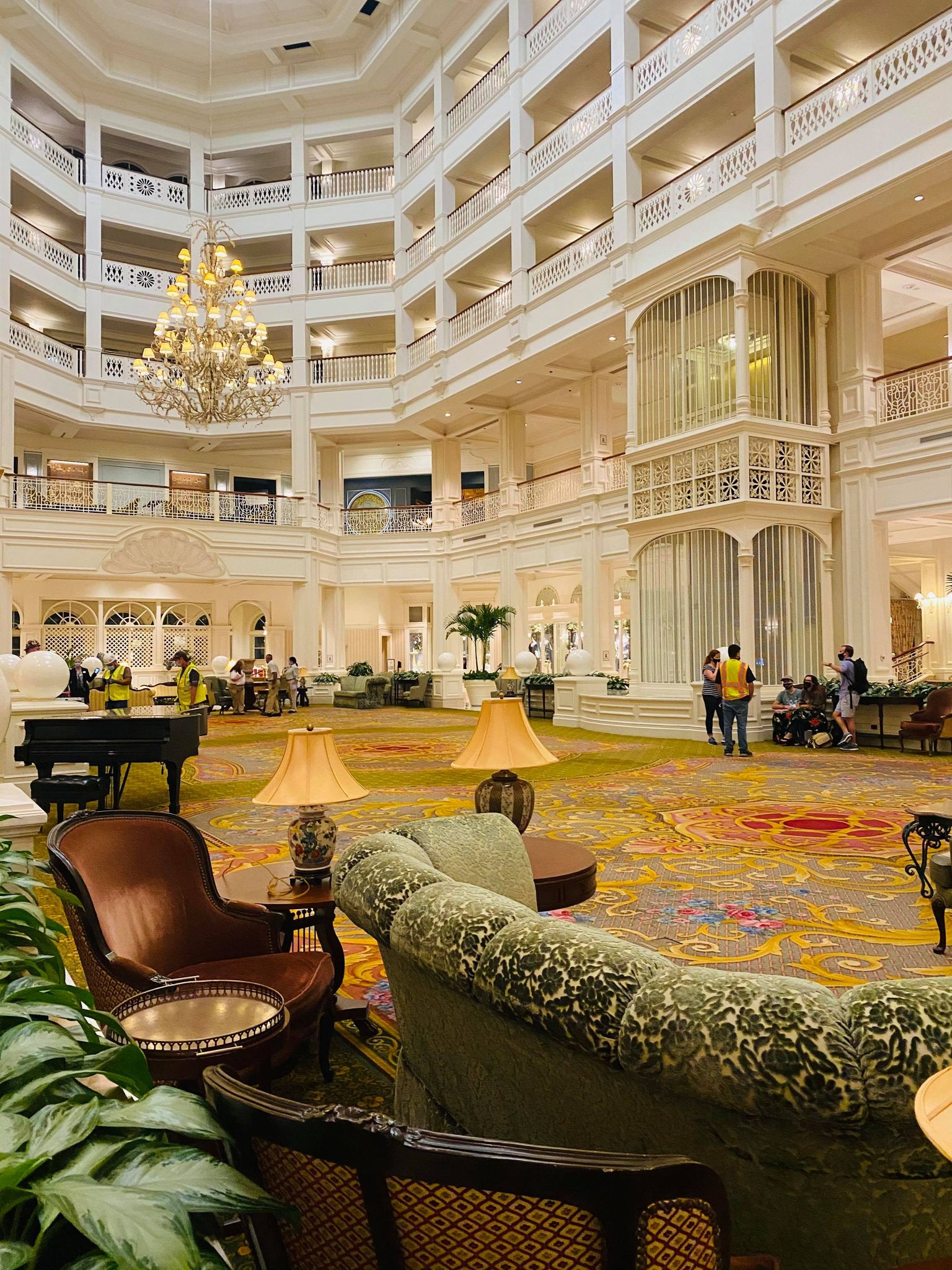 Also, a classical piano resides in the middle of this area. When you’re lucky, a pianist will perform many of your favorite Disney tunes. 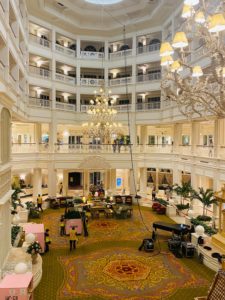 At the Contemporary, a coffee kiosk greets you when you enter the place.

Toward the back, you’ll find Steakhouse 71 and an escalator to the conference center floor.

In between these sections, you’ll find a sitting area complete with giant televisions playing Mickey Mouse cartoons. It’s all so magical.

You’ll feel welcome and at home the instant you enter the hotel lobby at a monorail resort!

Honestly, I could list 30 reasons why monorail resorts are the best. In fact, I’m bothered by the fact that it’d be overkill to discuss all the holiday decorations. 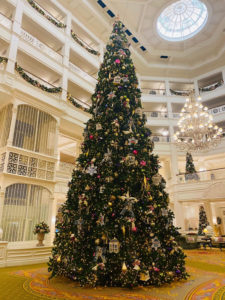 Still, you don’t want to read forever. So, I’m prioritizing the best stuff. The hotel restaurants are irrefutably high on that list.

To prove this point, I recently wrote about the top 10 monorail restaurants…and I had to exclude some terrific ones! 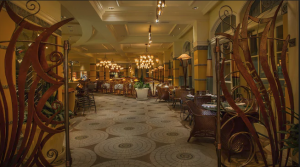 These three hotels offer so much decadent food that it’s impossible to eat at all of them during one visit.

However, simply by trying, you save all the stress of eating at the parks. You’ll face smaller crowds while dining on superior food. It’s an excellent trade!