Memories of a Magical Street Corner in Disneyland

On July 17, 2022, Disneyland turned 67, and as fans continue to celebrate the theme park’s storied past, one historical footnote will sadly be overlooked. Most visitors to this enchanted land begin by strolling down Main Street, U.S.A., often unaware of the area’s most magical feature: the Main Street Magic Shop.

In the 1970s, stepping inside was to journey to a virtual Never Land, run by a team of “lost boys” who refused to grow up. I know, because I was one of them. 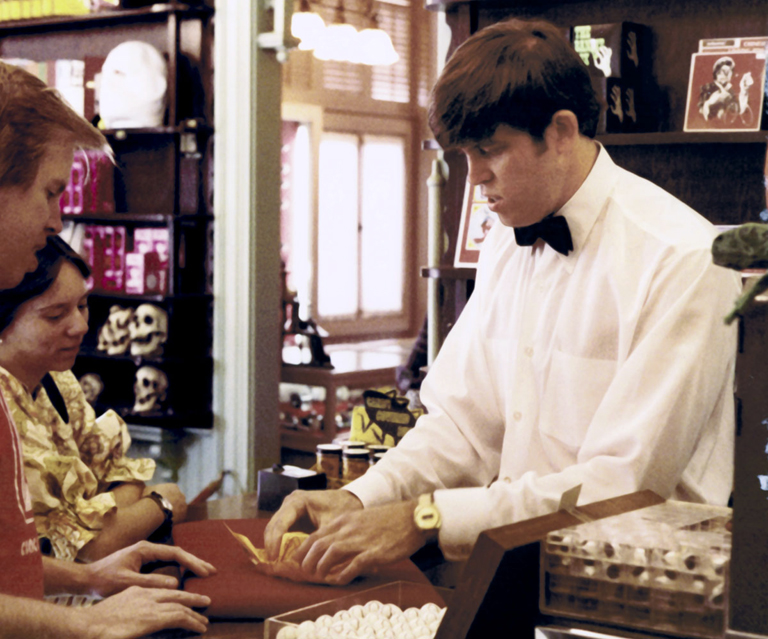 The shop’s most famous cast member, a then teenaged Steve Martin, had moved on well before my arrival. The comic legend has long credited his time there for igniting his passion for comedy.

Similarly, those playful surroundings would impact my future too, for I had stumbled upon what would prove to be the Magic Shop’s Golden Age. 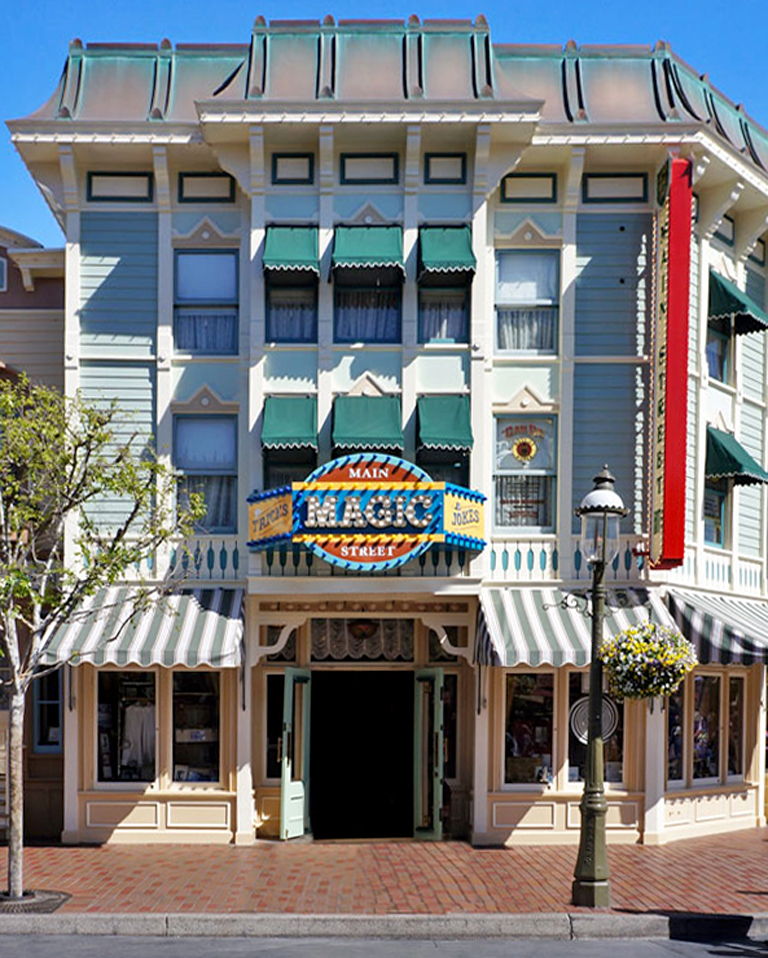 Then as now, the shop was one of the smaller Main Street locations, with a long counter and pegboard walls for displaying merchandise. (One thing absent today is the scent of pipe tobacco, wafting through the doorway to the Tobacco Shop next door.) But the little shop wasn’t just another storefront. It was a showplace! Most of the resident magicians belonged to Hollywood’s famed Magic Castle.

Besides demonstrating the tricks we sold, we dazzled visitors by performing our own close-up magic. Dumbfounded guests watched cards and coins magically vanish right under their noses, without the aid of marked decks, hidden compartments or gimmicky props. Where else could you observe masterful sleight-of-hand technique – performed just for you? 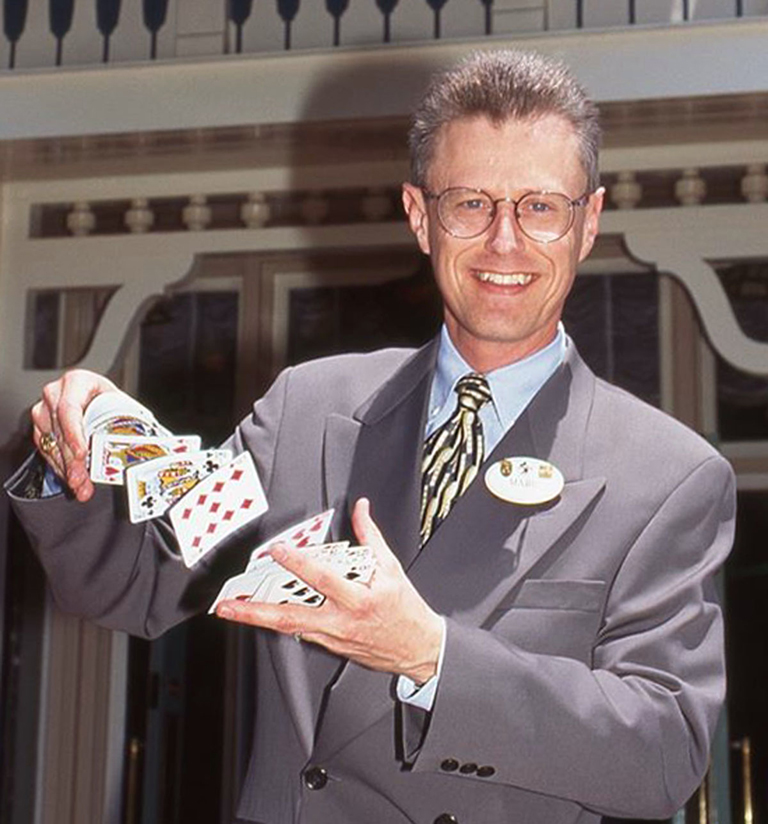 In addition to our magical duties, we promoted our other main stock-in-trade: jokes and gags. Each day I came to work surrounded by rubber chickens, Groucho glasses, and snakes in cans that unexpectedly sprang out at you. Many came into the shop solely to be squirted with fake mustard, or to watch people jump from the electric shock they received, when opening a gag book.

Growing weary of demonstrating these tired old pranks, we rigged the shop with some new ones of our own. One required attaching strings to rubber spiders, hanging them from the ceiling, then lowering the harmless objects onto the heads of unsuspecting guests. 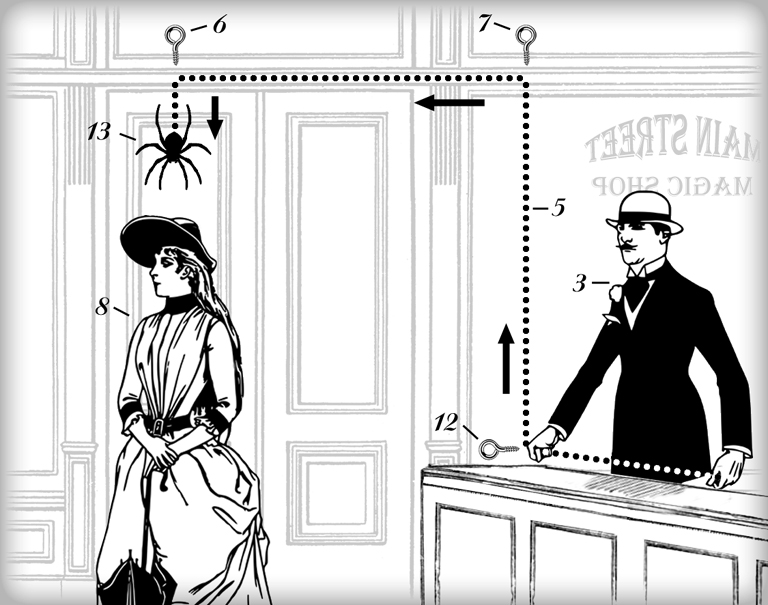 A basic diagram of the rubber spider gag setup.

Everyone in the shop laughed at the shrieks that typically followed. For the most part the intended victims went along with the gag, and laughed it off, too. Needless to say, not everyone appreciated being embarrassed in public – especially those with an acute fear of creepy-crawly creatures. Complaints were inevitable. In response, our supervisors would march into the shop, armed with scissors, and proceed to cut down our spiders.

We nodded as they explained that our guests’ wishes come first, even after we argued that our shenanigans were something they had come to expect. But the point was well taken. And out of respect for our bosses’ position, we always waited a week or two before putting the spiders back up. 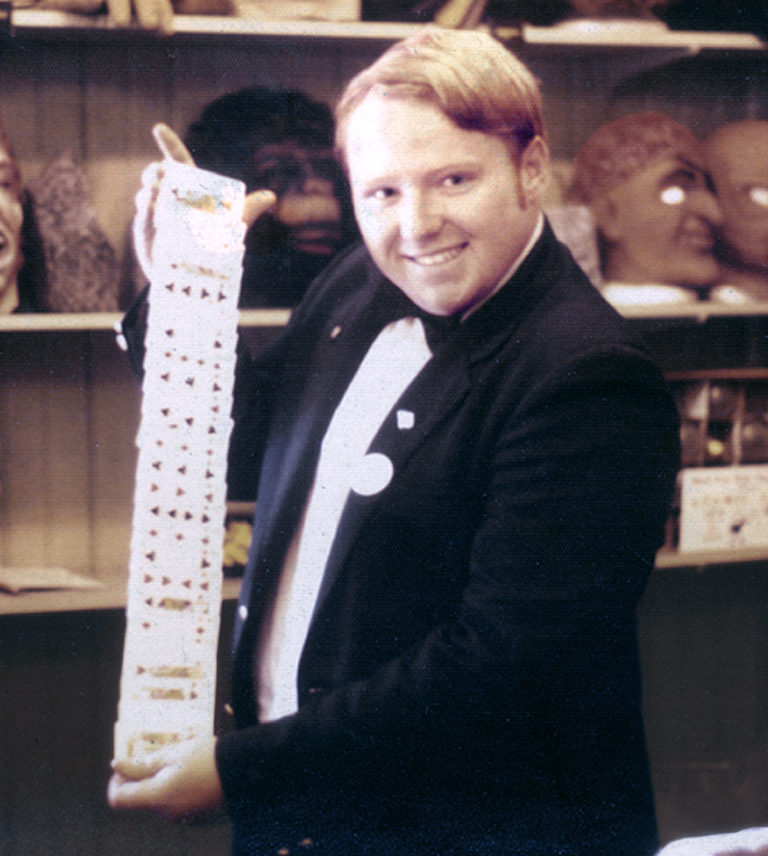 Magician Harry Snowden shows off his “waterfall” flourish. (The cards are actually strung together.)

As much as people enjoyed our silly antics, they didn’t know that they were not the only victims of these childish pranks. Fellow cast members were also prime targets for a good gag.

One evening, just after closing, the night crew loaded the cash register drawer with as many “snakes” as it could hold, providing a spring-loaded surprise to whoever opened it the next morning. Though the culprits were not there to witness the event, other Main Street cast members reported hearing a horrific scream above an otherwise tranquil morning. 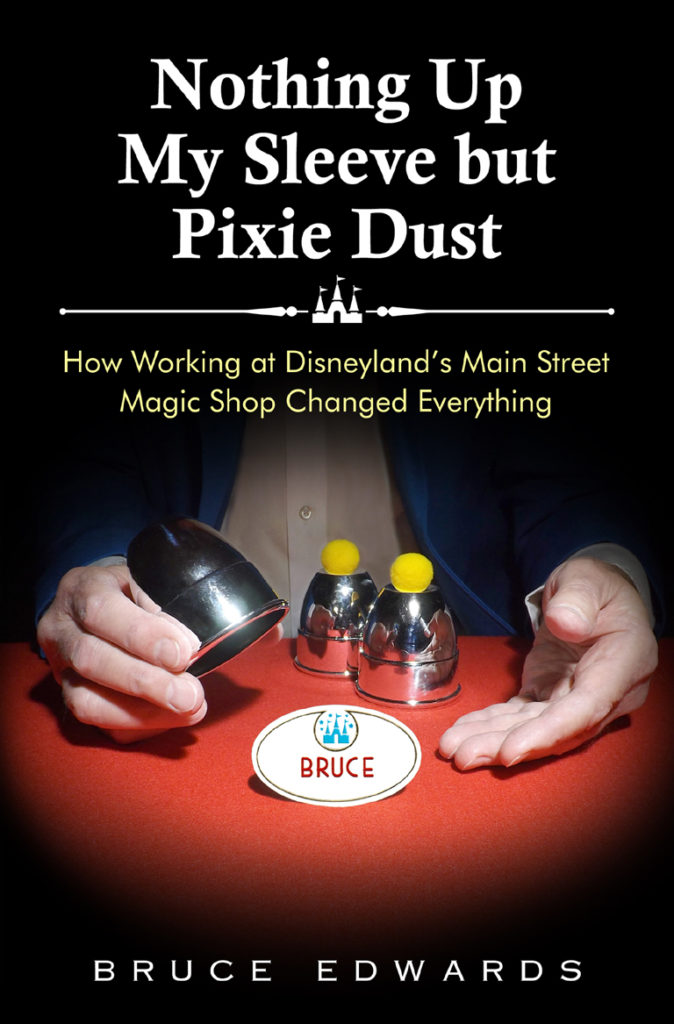 Nothing Up My Sleeve but Pixie Dust: How Working at Disneyland’s Main Street Magic Shop Changed Everything – Book Cover

If you’re planning a trip to Disneyland this summer, before blasting off to far-away galaxies or battling super villains, stop by that little piece of Never Land on Main Street, U.S.A. Prepare yourself for a special kind of magic seldom associated with the Magic Kingdom. And if you happen to be of a certain age like me, you’ll relish revisiting that timeless land, where growing up is optional.

Bruce Edwards is the author of his newly-released memoir, Nothing Up My Sleeve But Pixie Dust: How Working at Disneyland’s Main Street Magic Shop Changed Everything.