At the time, nobody could have anticipated how Marvel would evolve into a core aspect of modern cinema.

Over the years, Disney has introduced many new ways for guests to experience Marvel stories like never before.

Somehow, the Disney Wish has raised the bar yet again with its newest dining experience. 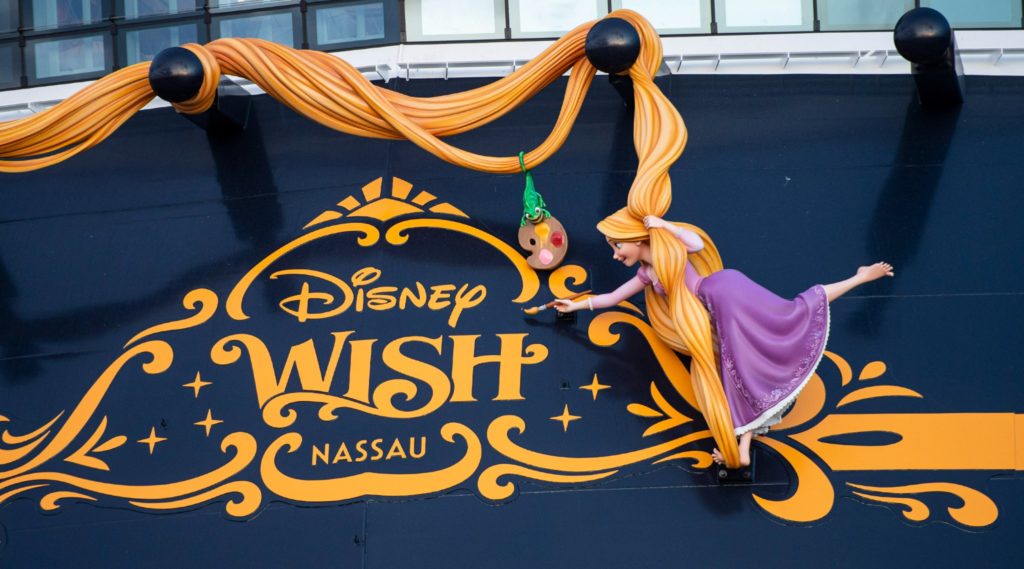 Let’s talk about Worlds of Marvel and its fantastic show, Avengers: Quantum Encounter.

What Is Worlds of Marvel?

You can think of Worlds of Marvel as the dinner, while Avengers: Quantum Encounter is the show. 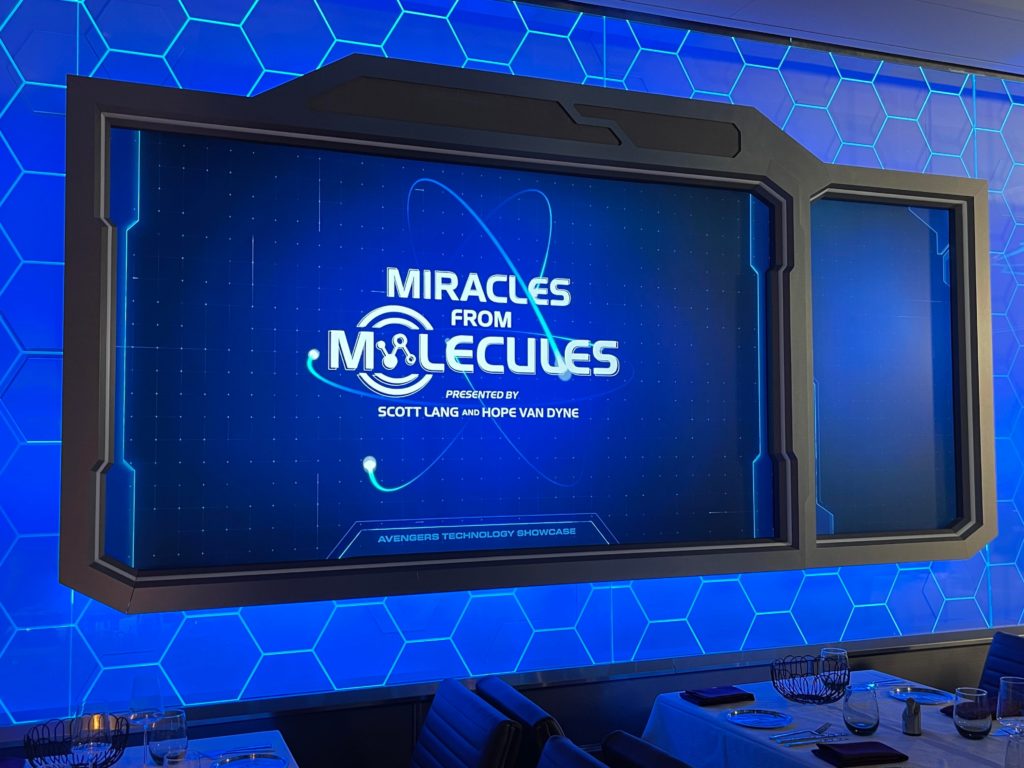 For dinner each night, you’ll have your choice of up to five restaurants. However, only three of them come as a standard part of the package. 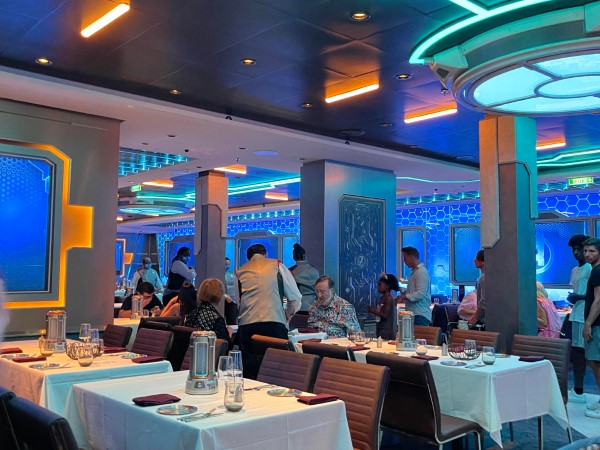 As such, you’re likely to spend three of your nights rotating between 1923, Arendelle: A Frozen Dining Adventure, and Worlds of Marvel. 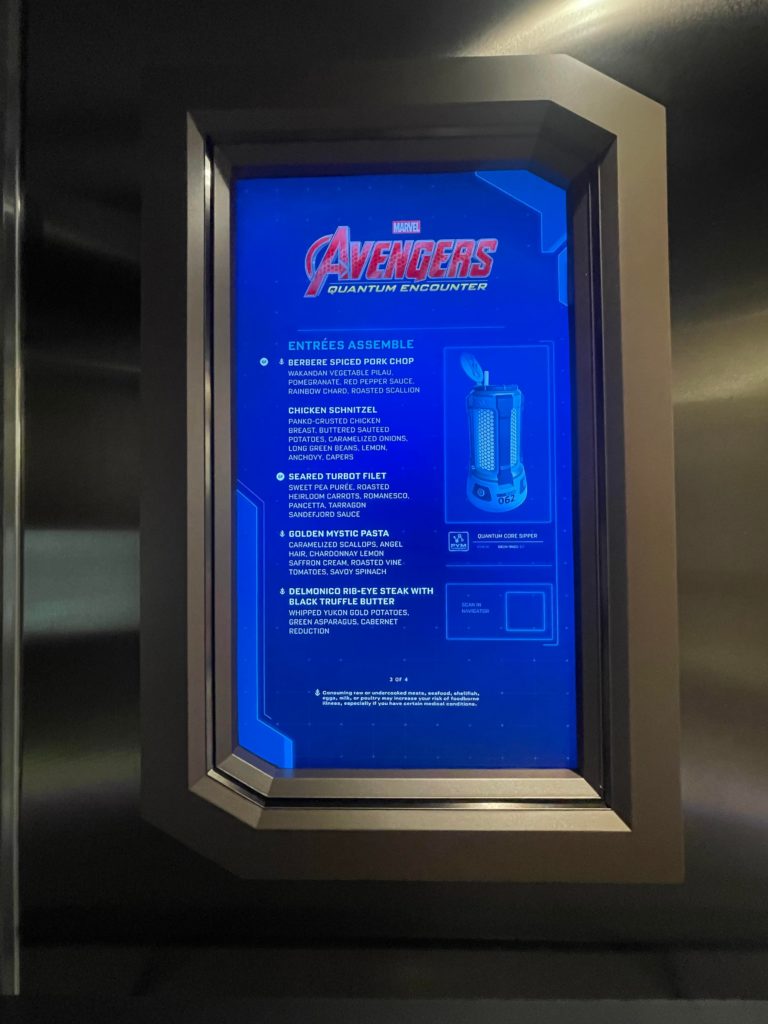 Once you’ve read all three of my reviews, you’ll understand that you cannot go wrong with any of these places. They’re all 10 out of 10 establishments.

Disney has married fine dining with a comfortable atmosphere and spectacular entertainment. 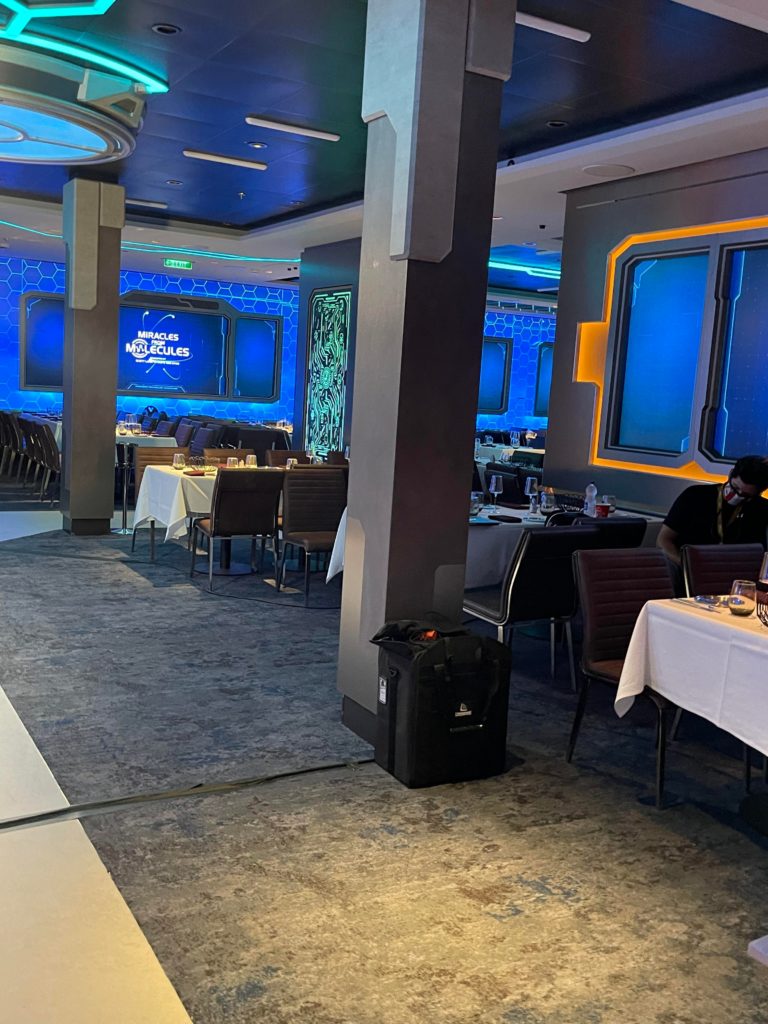 As such, I think of all three rotational dining options as Maximum Disney.

For its part, Worlds of Marvel embraces the Marvel Cinematic Universe (MCU) in an unprecedented fashion. 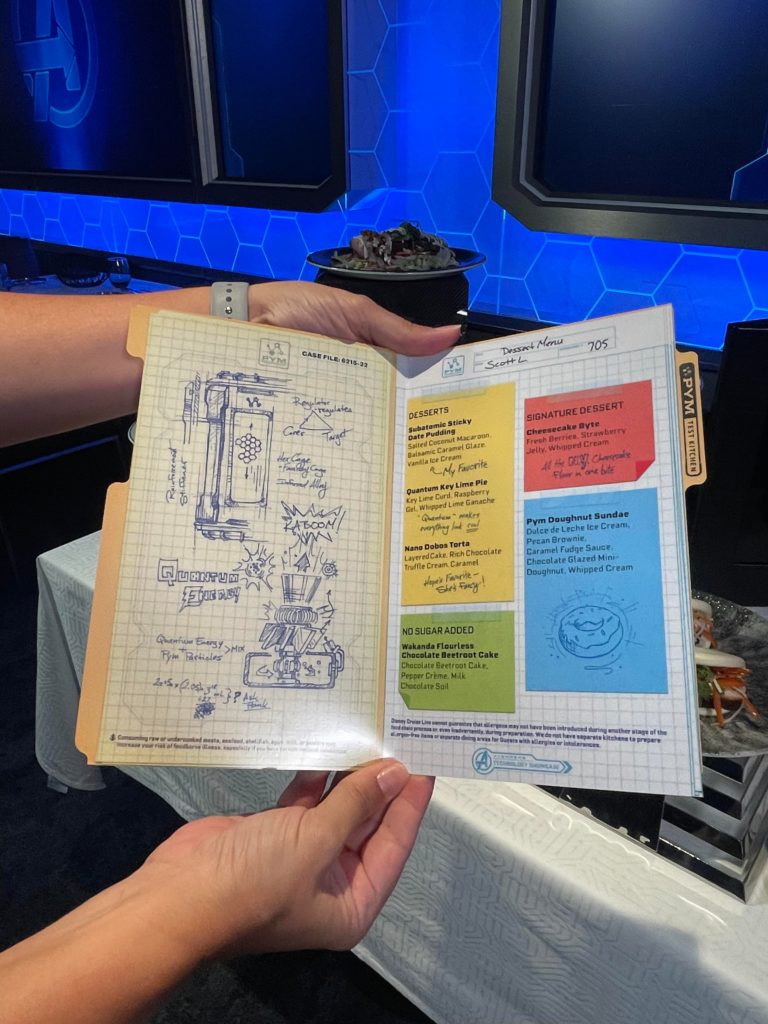 The story that takes place during your meal is set on the Disney Wish! Much to your surprise, various Avengers will appear, which sounds great.

Then, you remember that a bunch of Avengers only show up when a supervillain is doing something dastardly. In this case, it’s Ultron and a bunch of his bots. 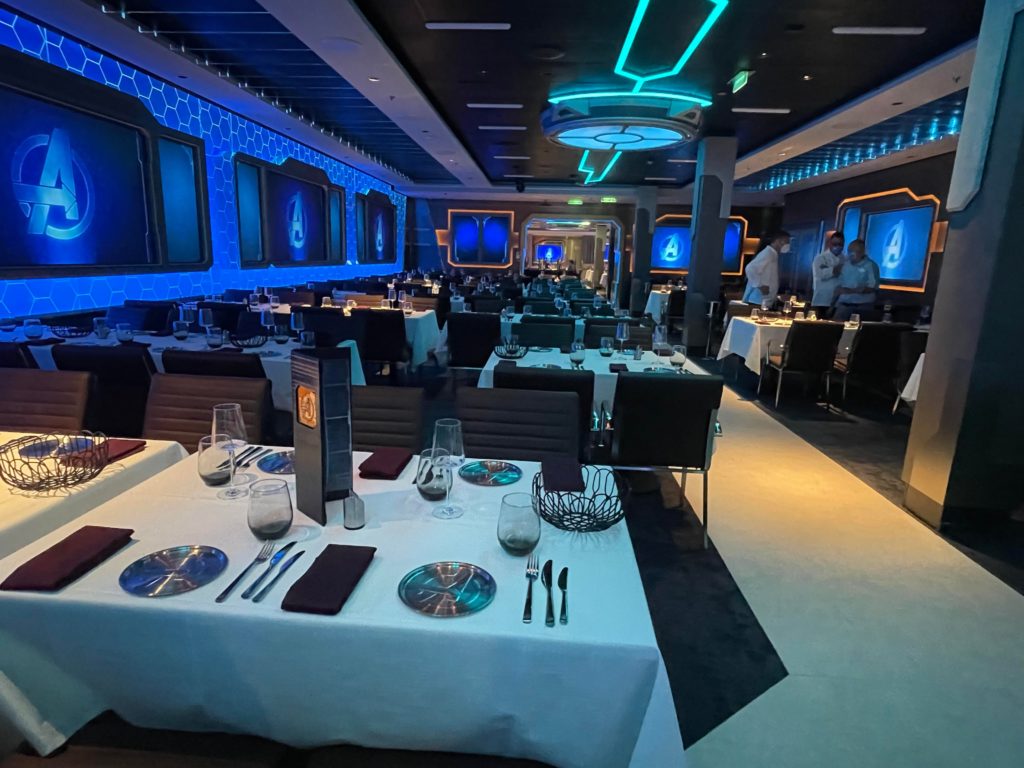 So, you’re going to eat while Ant-Man, The Wasp, and their fellow Avengers save the day on the Disney Wish.

Let’s Talk about Worlds of Marvel

You’ll know you’re in the right place as soon as you walk down the hallway that leads to this restaurant. 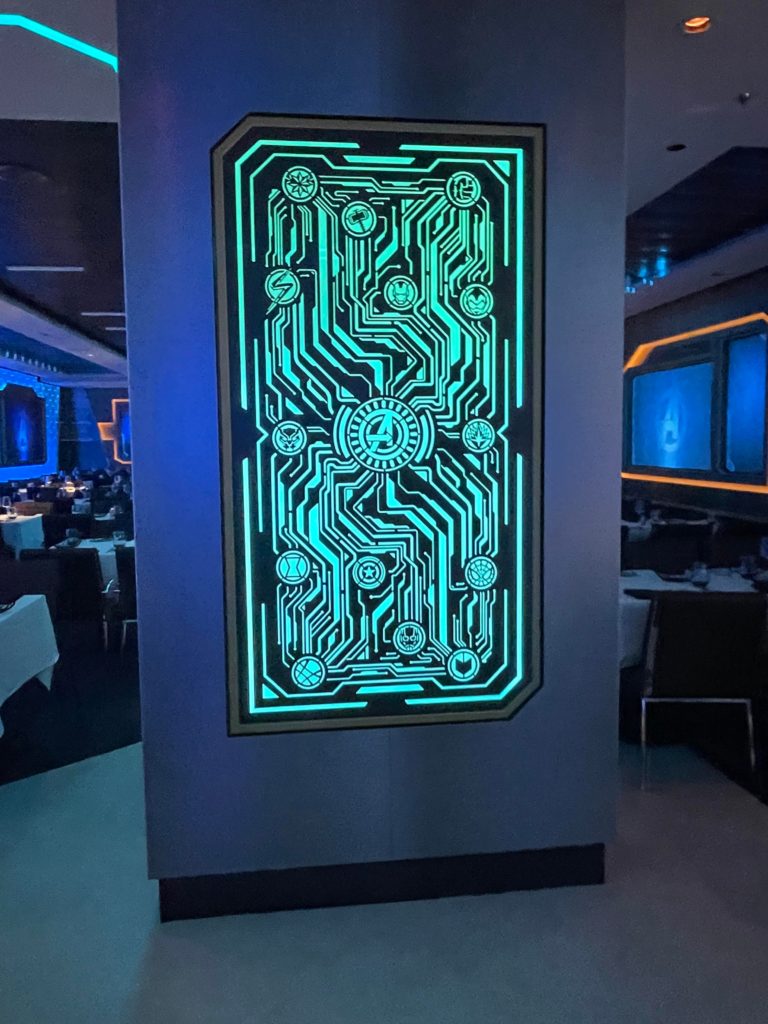 On the right, a giant Avengers: Quantum Encounter sign displays the menu options for the night.

Please take a moment to familiarize yourself with what you can eat. Also, remember that you’ve already paid! 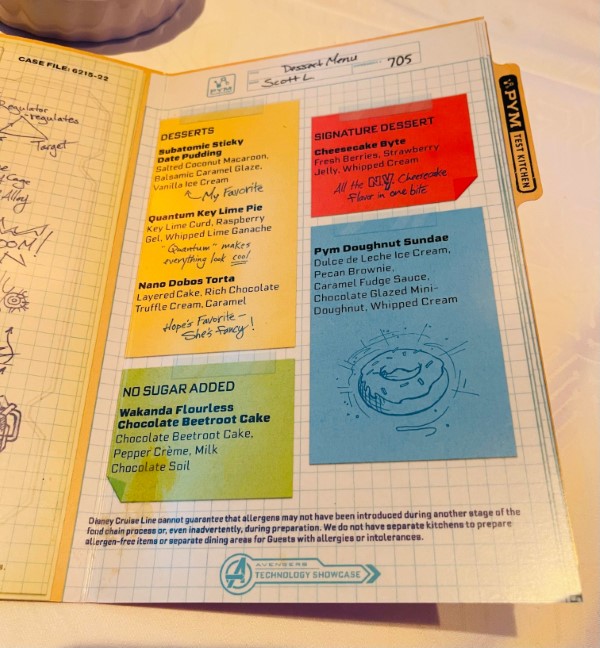 You can order as much as you want, and they’ll keep bringing it to you! Go nuts, my friends!

Of course, you must enter the restaurant first. Across from the digital menu, you’ll see a Worlds of Marvel sign with the Marvel logo big and bright. 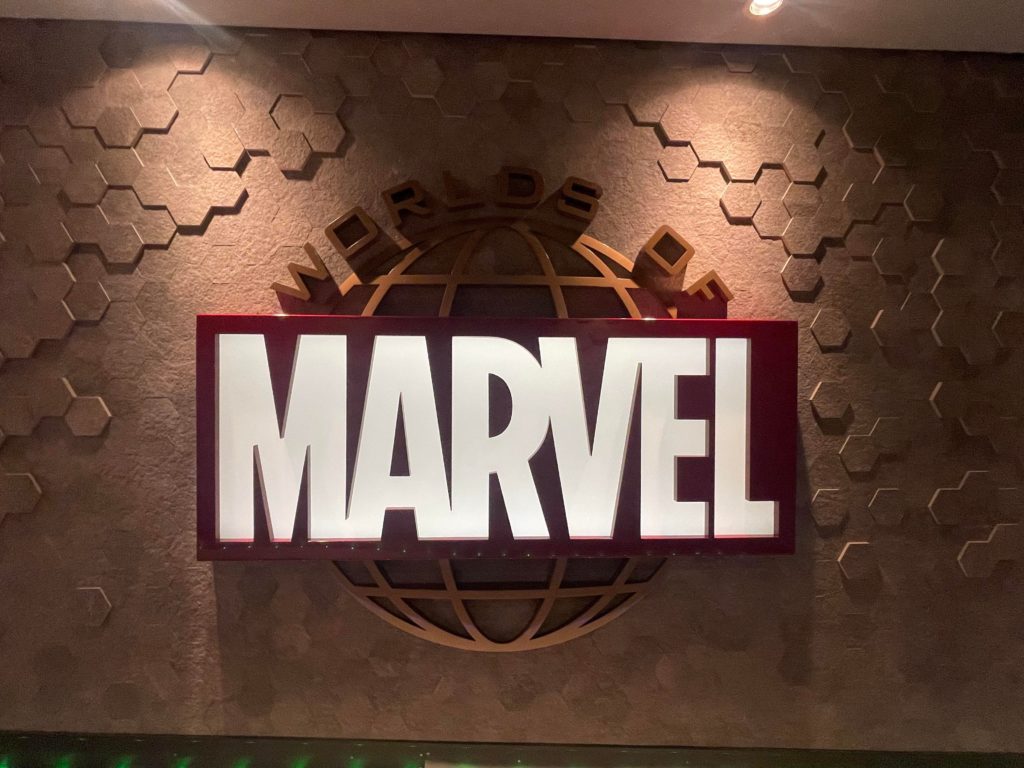 You’ll walk down a blue corridor that turns a familiar shade of red at the end. Somewhere, Tony Stark’s ghost is smiling.

Once you enter the restaurant proper, you’ll notice long rows of tables.

For this reason, the table rows are long. The restaurant has subdivided most of them into two-tops, four-tops, and six-tops, though. 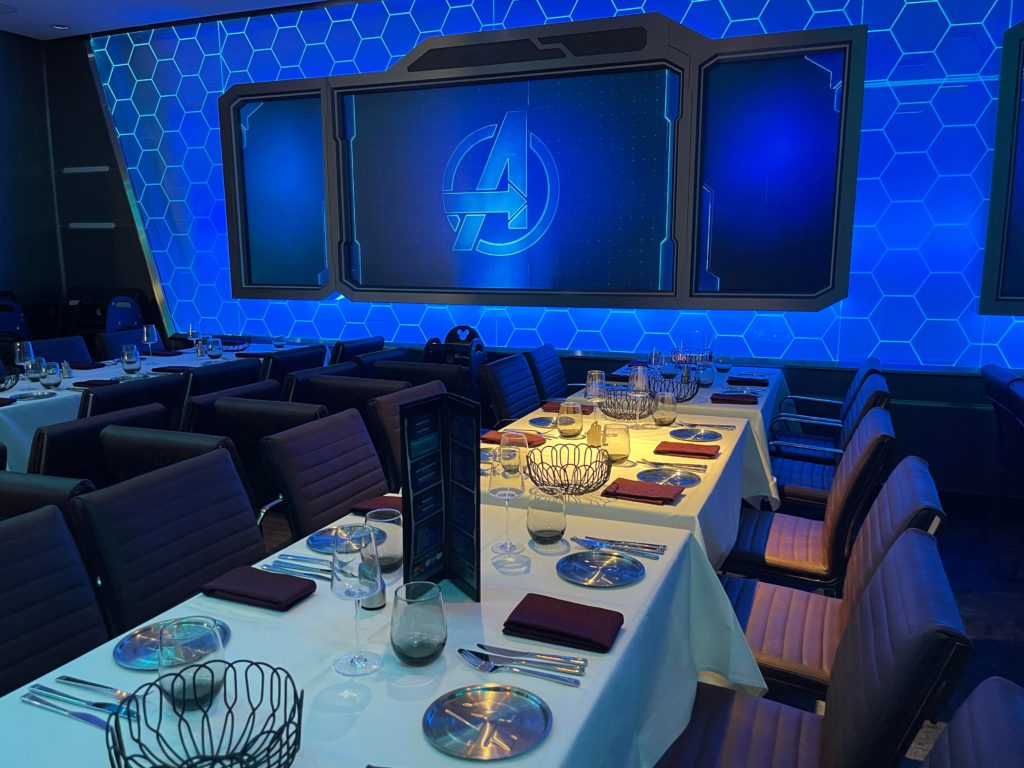 You’ll have a bit more space than in the Arendelle restaurant. You may not even notice, though.

I say this because Imagineers have filled the entire restaurant with digital monitors, some of which are smaller enough that they look like a 55” tv turned sideways. 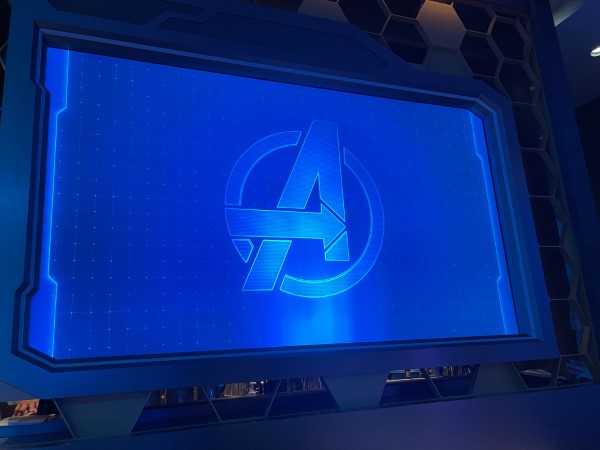 Others join together to comprise the entirety of the walls within the restaurant. In short, Disney wants you to have a good view. That’s because…

What to Expect at Avengers: Quantum Encounter

During your meal, Ant-Man and The Wasp will appear on the monitors. Once you see them, the show has started. 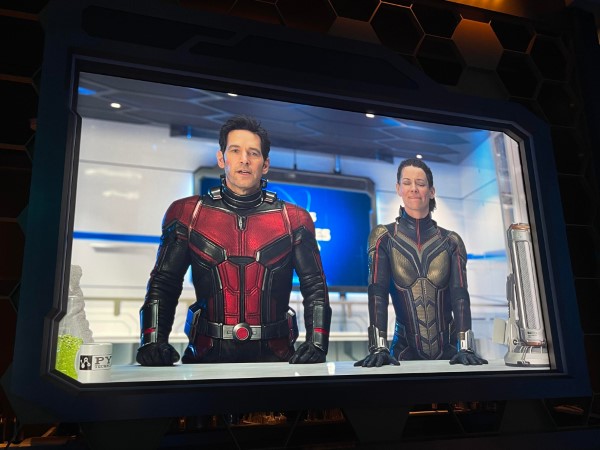 Before and after this experience, the monitors will display scenes from your favorite MCU movies instead. So, there’s always entertainment on-screen.

However, the signature entertainment here involves the Avengers. Scott Lang and Hope van Dyne will appear to make small talk.

Join Ant-Man and the Wasp for an action-packed dining adventure at Worlds of Marvel restaurant on the all-new Disney Wish.

After Scott screws up a few times – it’s what he does – actual danger ensues. The Avengers sense the presence of Ultron.

Ant-Man and The Wasp call for help, leading to the arrival of the new Captain America, Sam Wilson, and the youngest Avenger, Ms. Marvel.

Seen at the Avengers dining experience on the new Disney Wish cruise.pic.twitter.com/f1NB2sqPva

The four of them and a surprise fifth Avenger work together to fight off the Sub-Ultrons and, eventually, Ultron himself.

Heroes are taking to the high seas aboard the #DisneyWish! 🚢 https://t.co/QKLv8xGHnT

Instead, Ross Marquand acts as Ultron, just as he does in Marvel’s What If…? on Disney+.

I don’t want to ruin the whole thing. So instead, I’ll leave the option up to you. Here’s a video of the entire Avengers: Quantum Encounter experience if you’re interested.

No, I don’t know why Disney is pushing its chicken tenders so hard, either. Still, that’s an incredible show.

About the Food at Worlds of Marvel

MickeyBlog didn’t have the highest expectations for a Marvel dining experience. 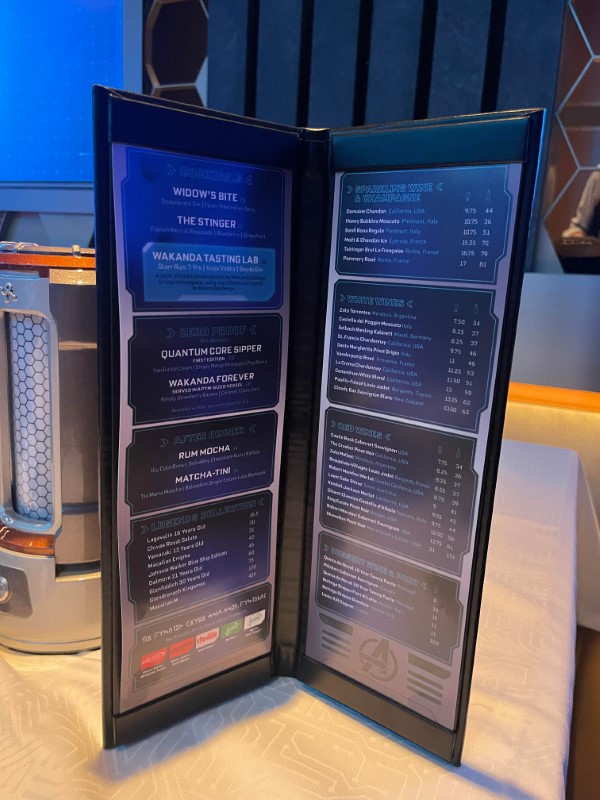 Sure, we love Pym Test Kitchen at Disney California Adventure, but this isn’t billed similarly.

To our utter shock, Worlds of Marvel offers an even better menu and superior cuisine. 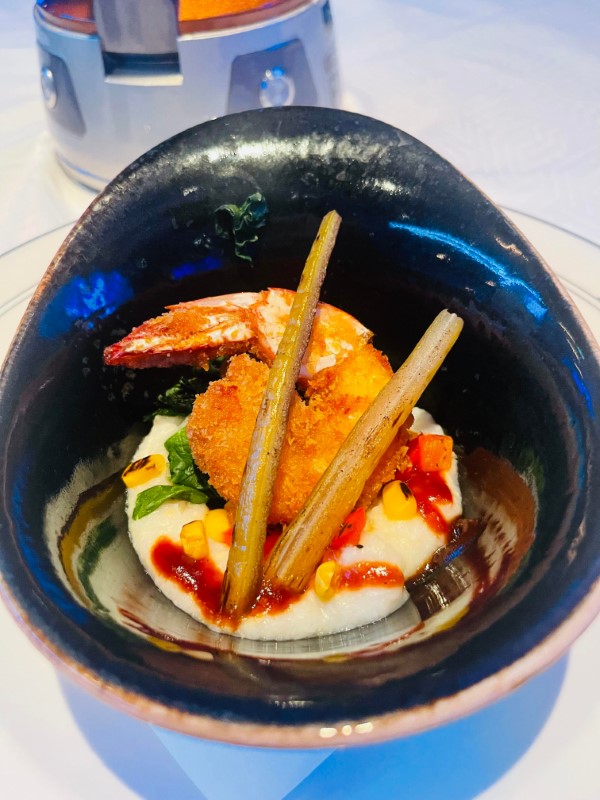 Seriously, one of our MickeyBloggers swore they had one of the best steaks of their life here.

Another, who isn’t even a Marvel fan, had a terrific time and felt entertained throughout the meal. 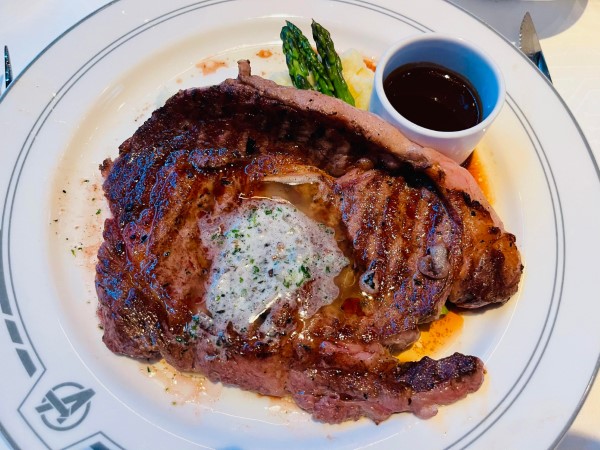 So, this place satisfies Marvel fanatics and non-fans alike! 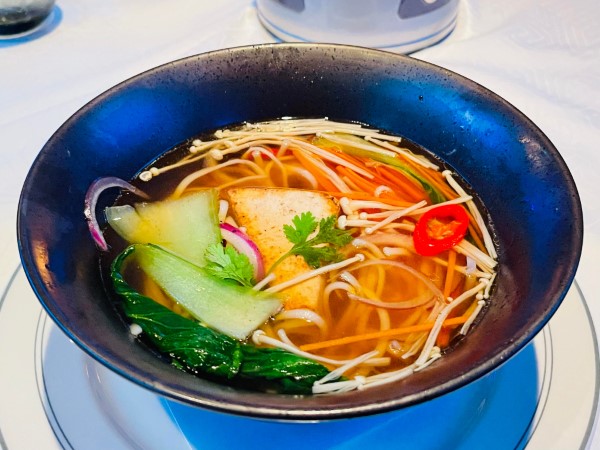 You can look at the entire menu here. Also, remember to check the digital display on the day of your meal in case something has changed.

Honestly, though. I can tell you a lot by making a very simple statement about Worlds of Marvel. 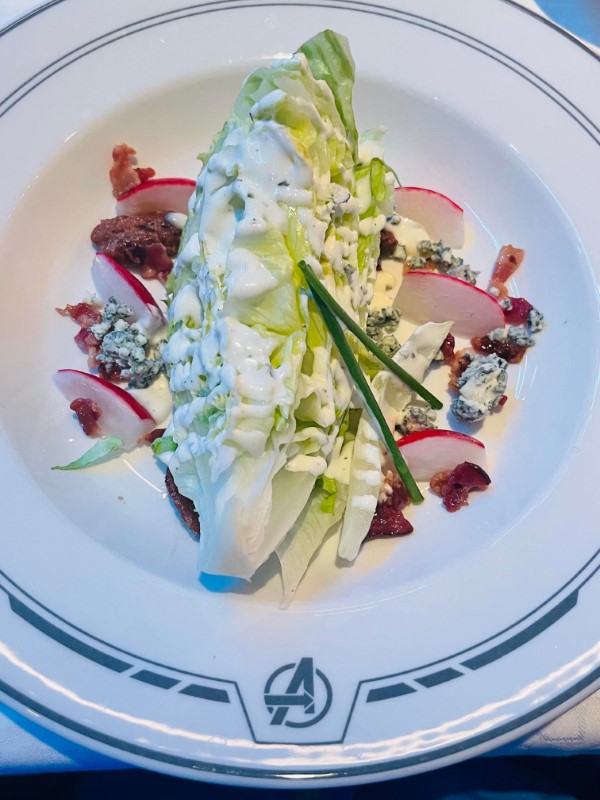 YES! You can eat shawarma here!

This restaurant gets every little thing right, and our staff adored it. 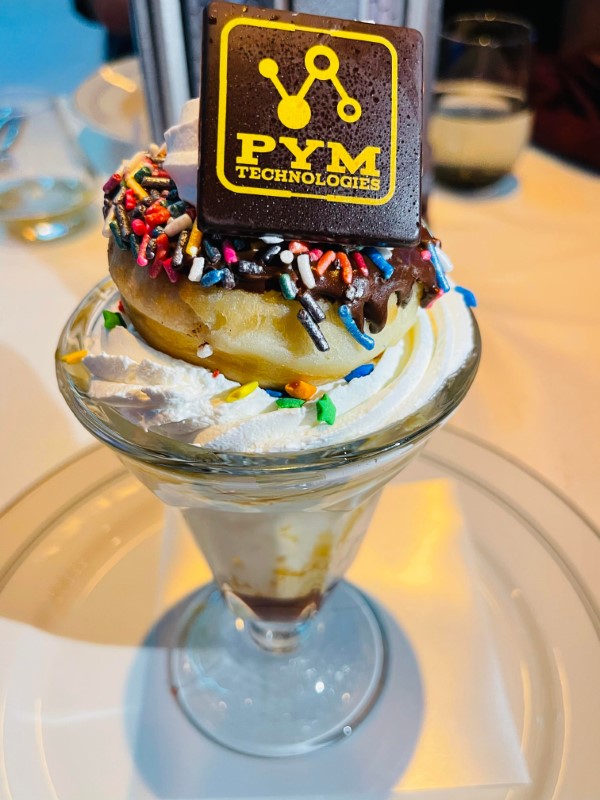 One person even voted it the best restaurant dining experience on the Disney Wish!

You’re gonna wanna eat at Worlds of Marvel Avengers: Quantam Encounter, and that goes double if you love the MCU! 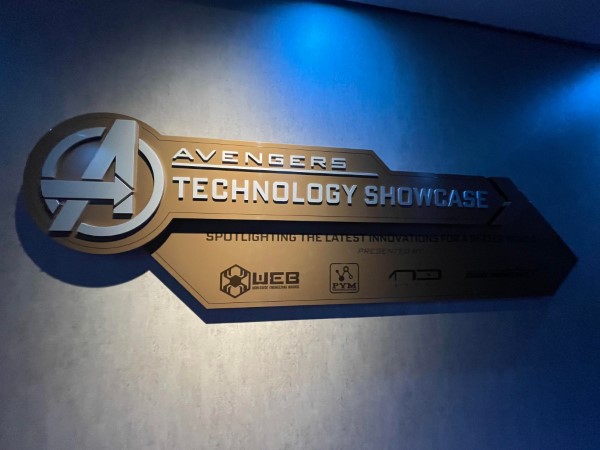