You HAVE to Try This NEW Summer Dole Whip Flight

Back in April 2022, the building that was once Aristocrepes in Disney Springs became Swirls on the Water and became the home for all of your Dole Whip dreams.

Don’t cry about missing your bubble waffles, you can still get them here. Plus, Aristocrepes was almost never open anyways! Swirls on the Water about broke the internet with its first Dole Whip Flight last spring when it came in hot, literally, with a habanero lime dole whip. Read that again… A spicy hot, but cold, dole whip. 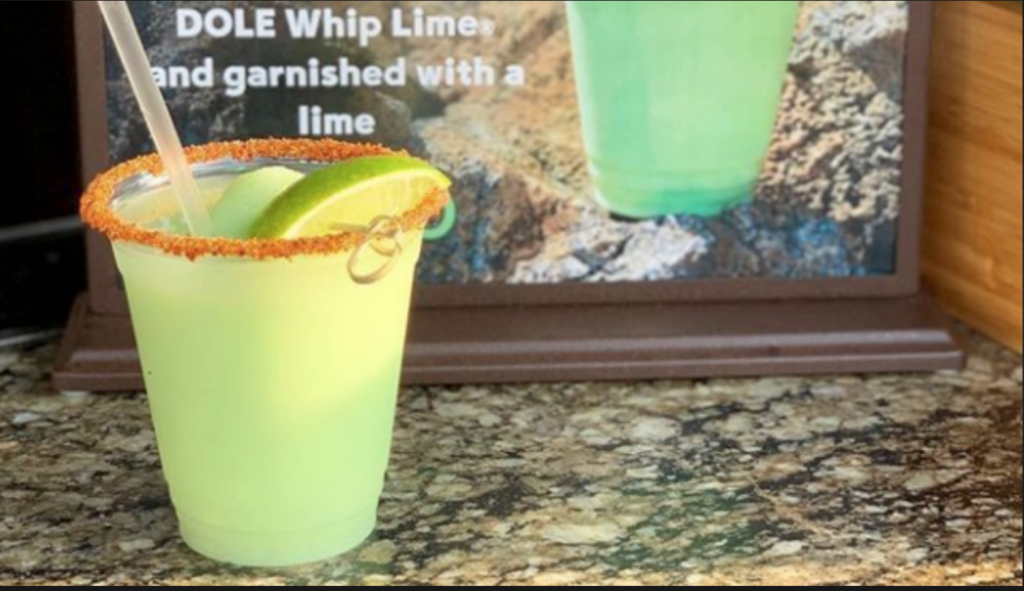 We’re not sure the world was ready for that particular concoction, but we were there this week and have tasted the NEW for Summer Dole Whip Flight.

First, can we just talk about this price? This is a snack steal! A regular cup of Dole Whip at Aloha Isle in Magic Kingdom will run you just over $5 after tax, and this is 3 healthy portions of different dole whips.

And, if we’re being honest with ourselves, we tried to figure out a way to take the cup/box contraption home. It won’t work, but we thoroughly appreciated how cute the presentation of 3 plastic martini glasses with Dole Whip are.

For Summer 2022, Swirls on the Water presented a strawberry cheesecake flavor to replace the habanero lime. The wild part? It’s purple! Like super purple. First cookie dough Dole Whip is Cookie Monster blue, and now cheesecake is purple. Disney, are you looking to get a contract with Crayola? 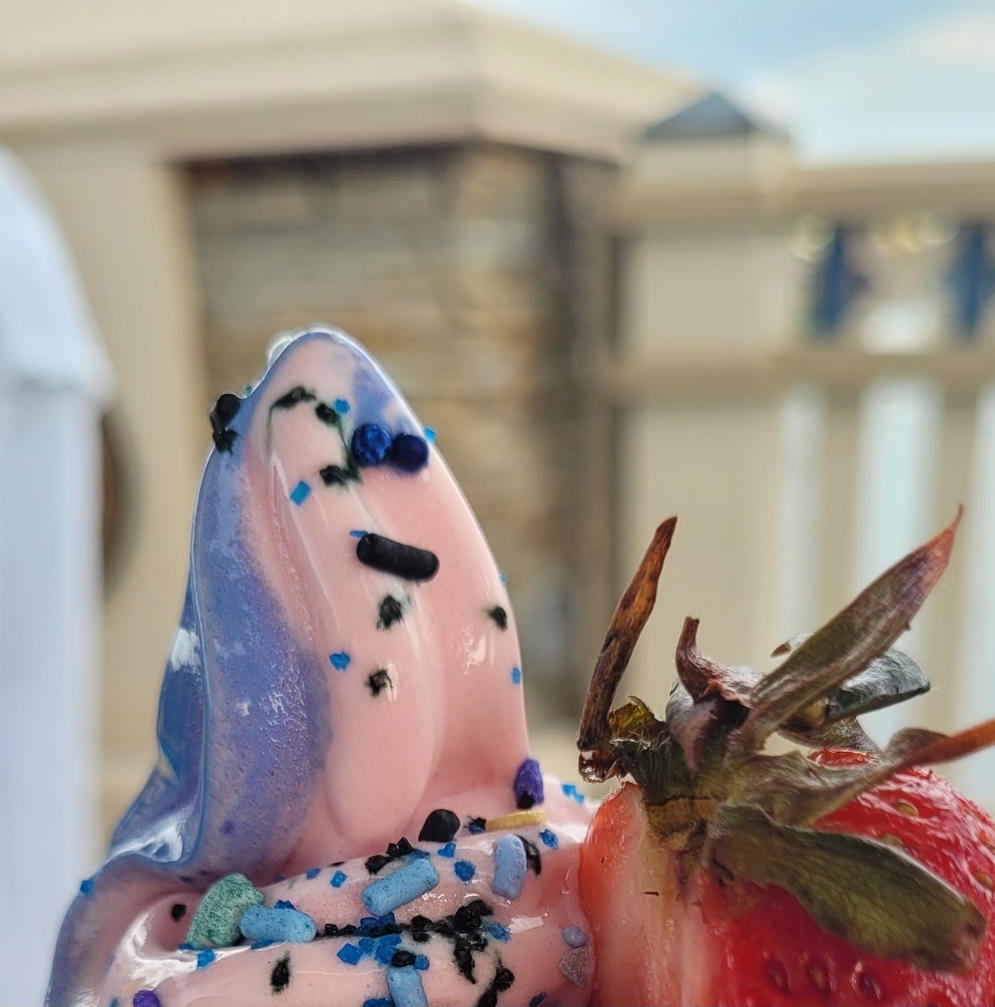 The three flavors are pineapple vanilla swirl, cookie dough lemon, and strawberry cheesecake. Another note on the presentation: With this price, we were also quite surprised to see every flavor had some form of garnish, including an adorable Mickey shortbread cookie.

This flavor is classic and we refer to it as the palette cleanser between the two newer flavor combinations. It is incredibly light and refreshing, and the vanilla swirl keeps it from being too pucker tart. Picture if you cut a pineapple in half and then poured on vanilla soft serve. 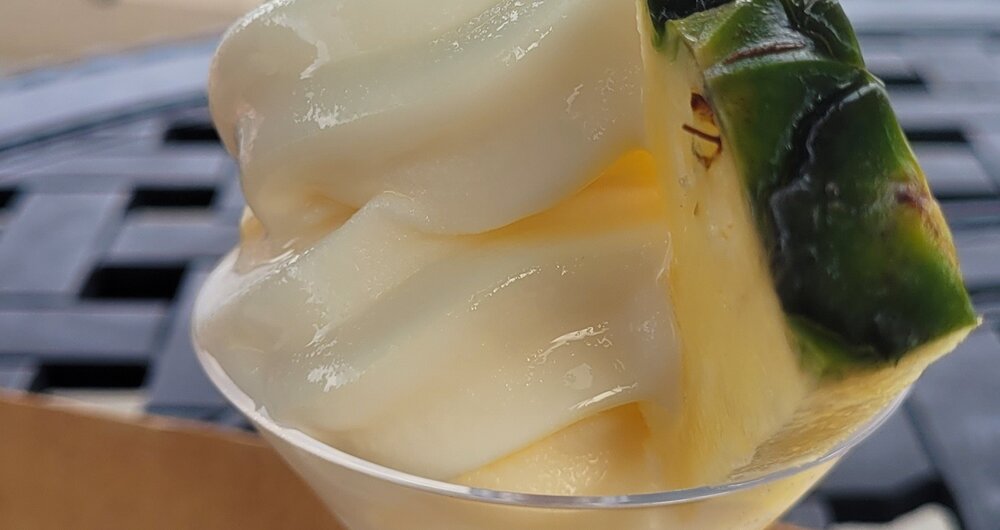 This flavor is returning from the original flight in the spring, but we feel the need to talk about it again because…look at it! Okay, the color is pretty in a picture, but is a bit of a turn off. And the idea of lemon with cookie dough is just… who asked for this?

But… then we tasted it and WE ABSOLUTELY LOVED IT! This flavor combo really shouldn’t work, but it just does. This ended up being my favorite. 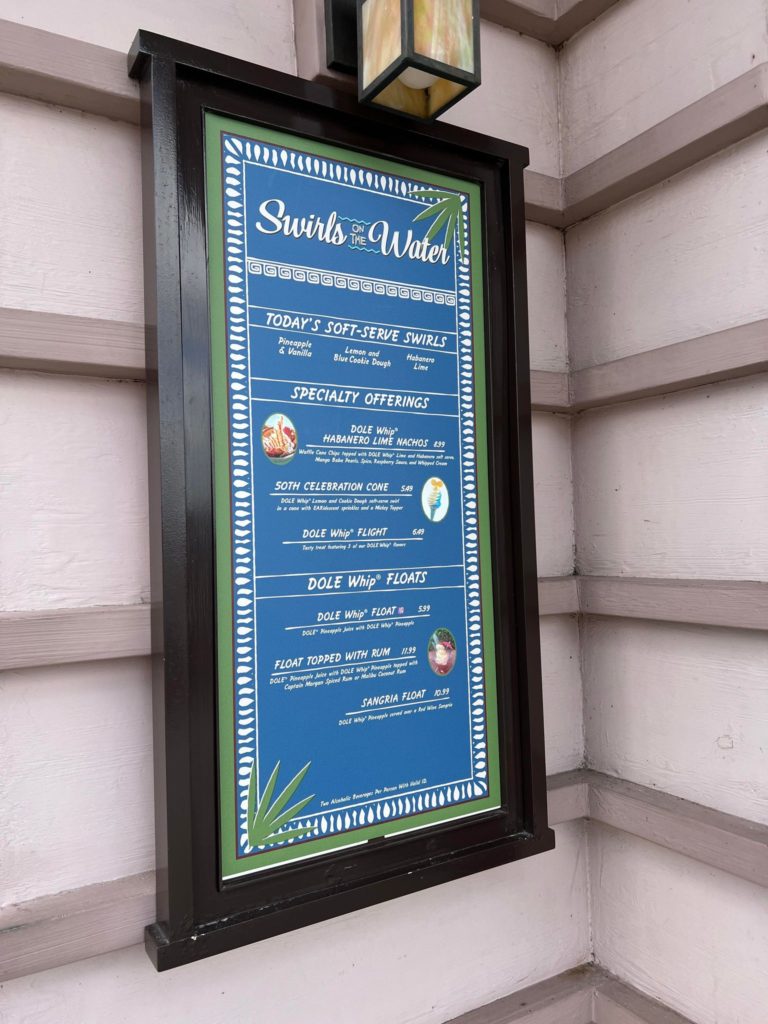 The habanero flavor of the spring was one that everyone just had to see, but no one really wanted to eat. Strawberry cheesecake will not be met with the same fear, short of the crazy coloring. We wouldn’t say that it actually tasted like strawberry or cheesecake but it was creamy and sweet.

The best way to describe this: Do you remember those hard candies, Cream Savers, from the 90s? Yeah, this is EXACTLY that flavor. The cheesecake portion of the swirl was good, not too sweet and really creamy. It was the strawberry that kind of brought it down a little.

The strawberry flavor was very artificial and was more like a candy flavor than a fruity flavor. Overall, we weren’t mad at it, but definitely interested to see what the next season has in store.

This snack in Disney Springs is perhaps the best snack to actually enjoy with the crazy Florida heat. The price is perfect and it is easily shareable with up to 3 people. We highly recommend taking a walk over to Swirls on the Water to try the latest Dole Whip Flight. 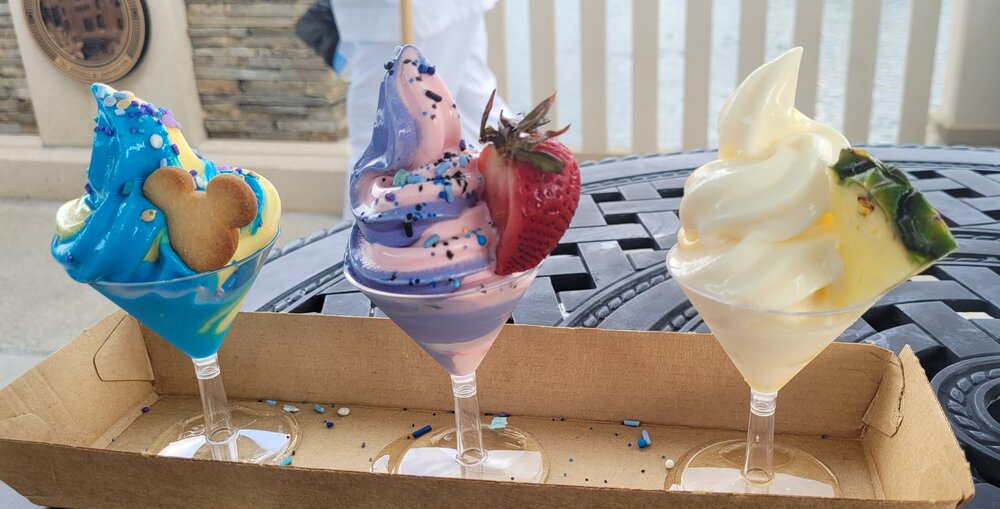 More at Swirls on the Water

You can get all types of Dole Whip snacks over at this little unassuming cart! You will find seasonal Dole Whip nachos (Christmas Mint Nachos are hands down the best), Dole Whip specialty cones, like the latest Buzz Lightyear cone promoting the new movie and even boozy Dole Whip drinks like sangria! This is the refreshing cart to eat, drink, and be merry.