Now this is what I call a movie premiere! Our MickeyBloggers are at Disney Springs where the animated film Bob’s Burgers has made its Memorial Day Weekend debut and let’s just say they’re pulling out all of the stops! 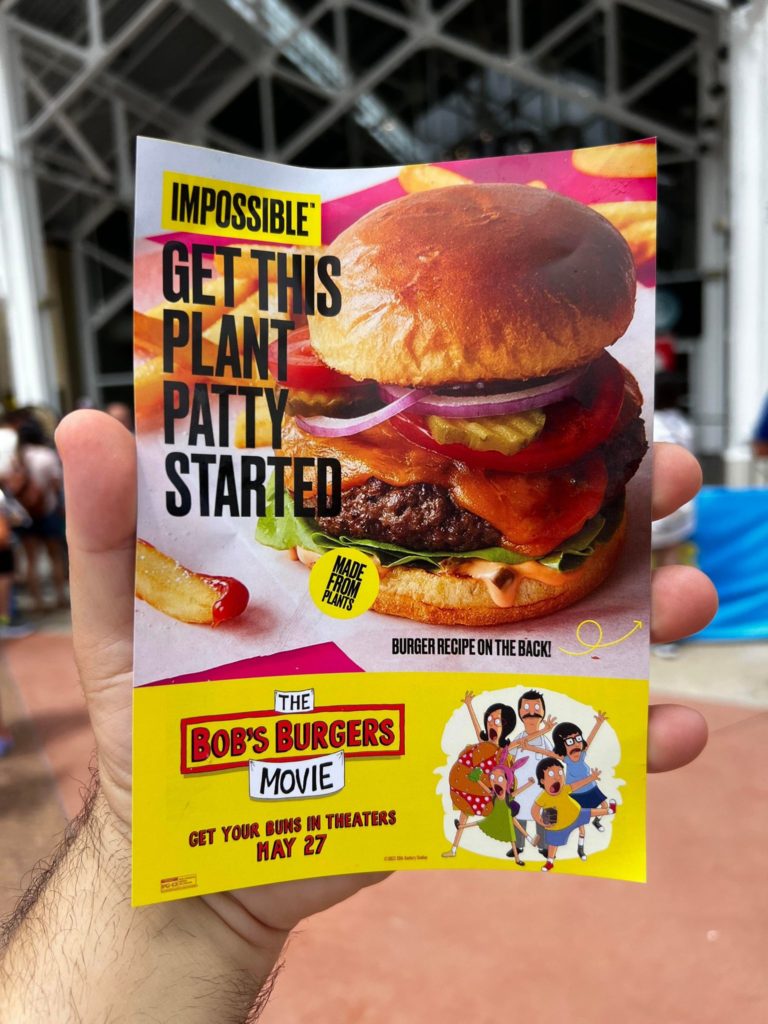 If you’re at Disney Springs this weekend then you’ll want to pop over and take advantage of some FREE FOOD! 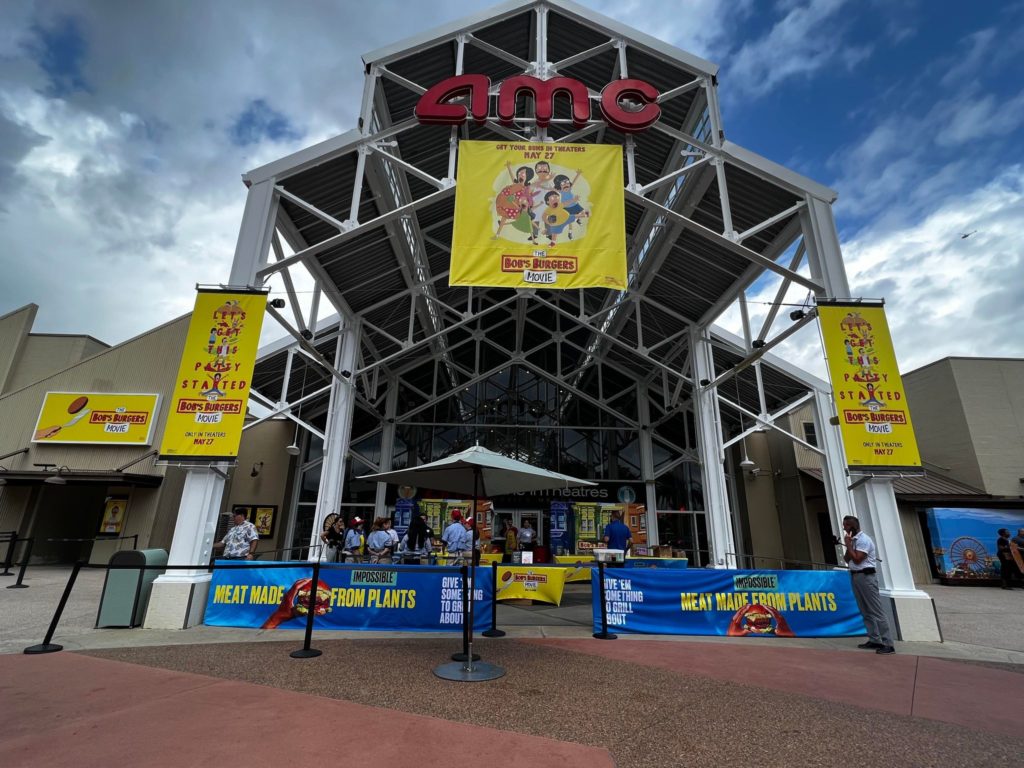 The theater is doing a cross promotion with Bob’s Burgers and the Impossible Burger! 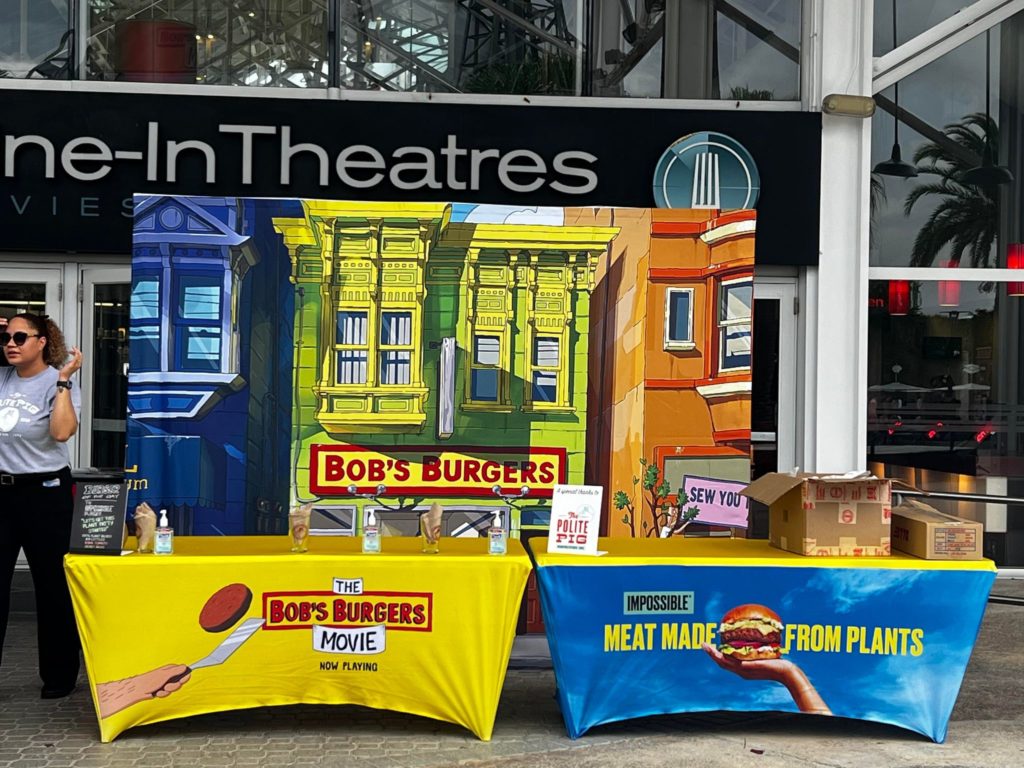 They are serving up some meatless burger treats to visitors to the cinema on the West Side of Disney World’s downtown shopping district! 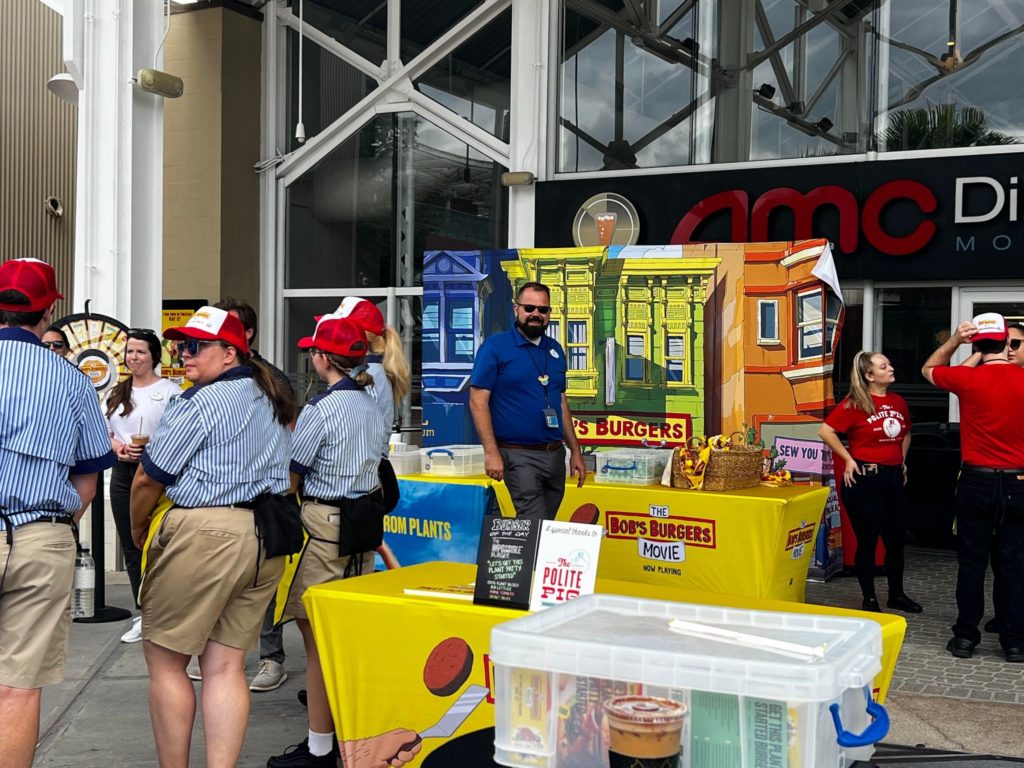 In addition to free food they’re also giving away some awesome swag! 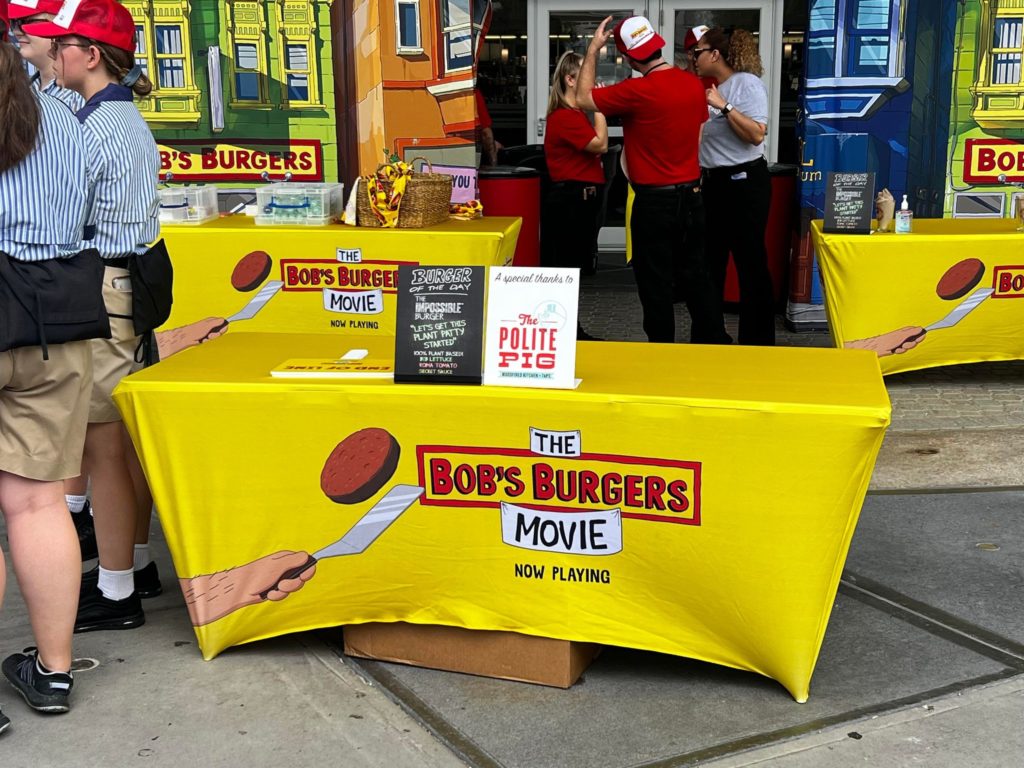 It also looks like The Polite Pig, one of our favorite places to get BBQ at Disney Springs is also in on the fun! 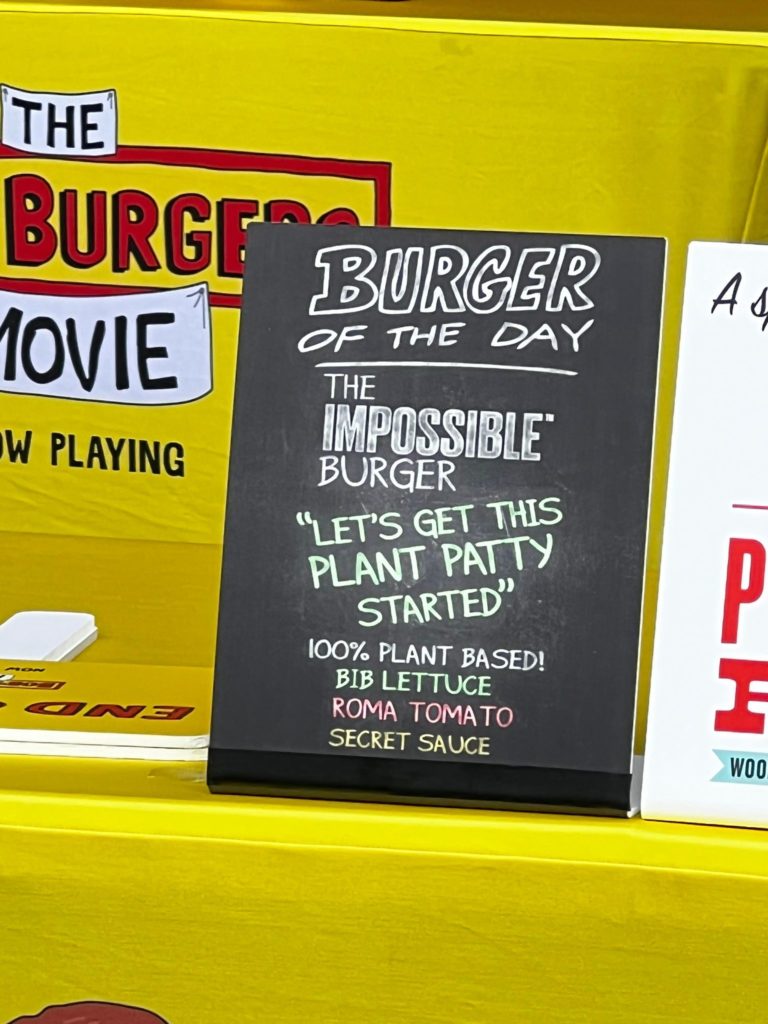 The Burger of the Day is the Impossible Burger topped with Bib Lettuce, Roma Tomato and Secret Sauce! 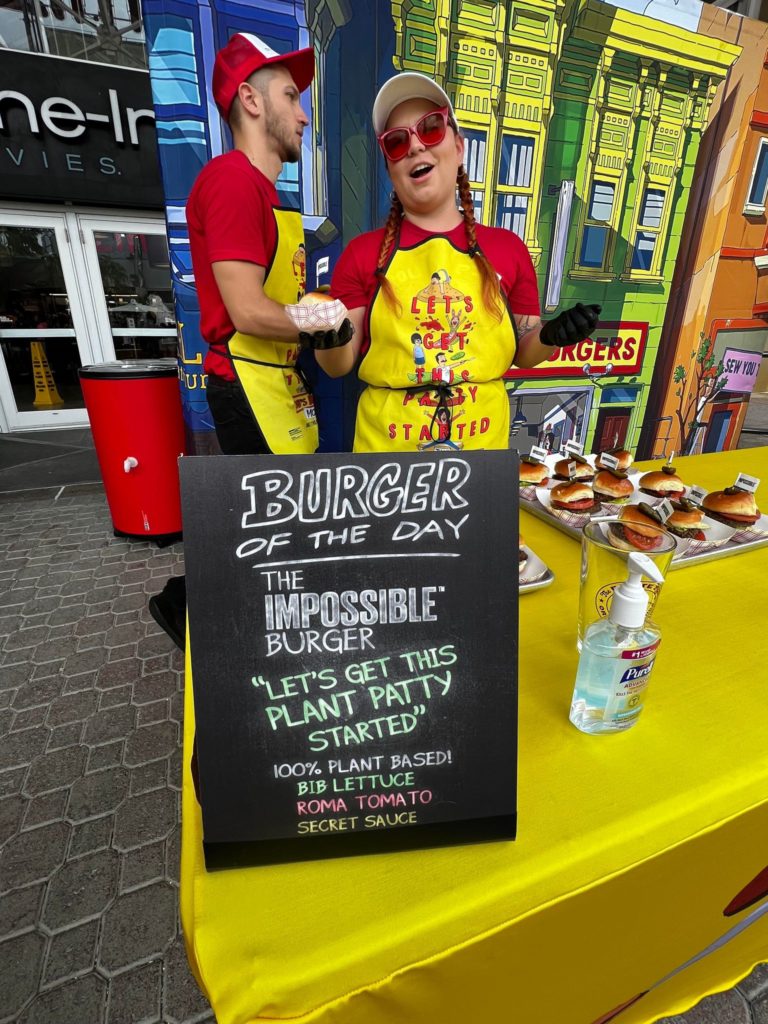 There were burgers pre-made that guests could pick up. 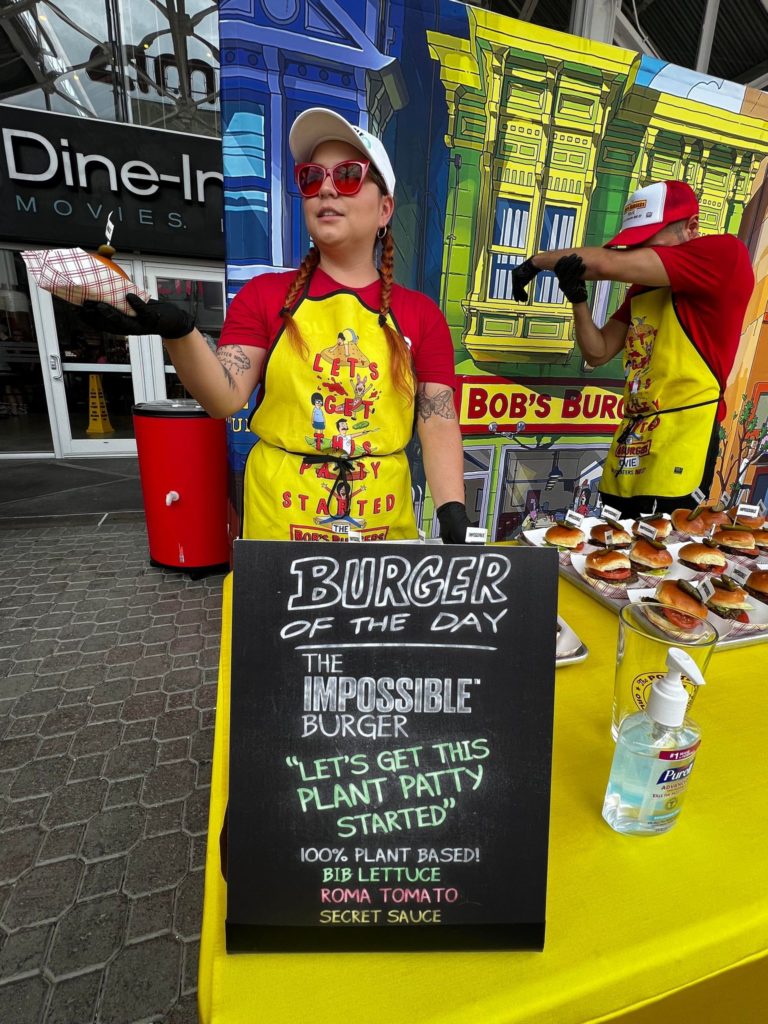 All of the workers are wearing Bob’s Burger’s aprons! 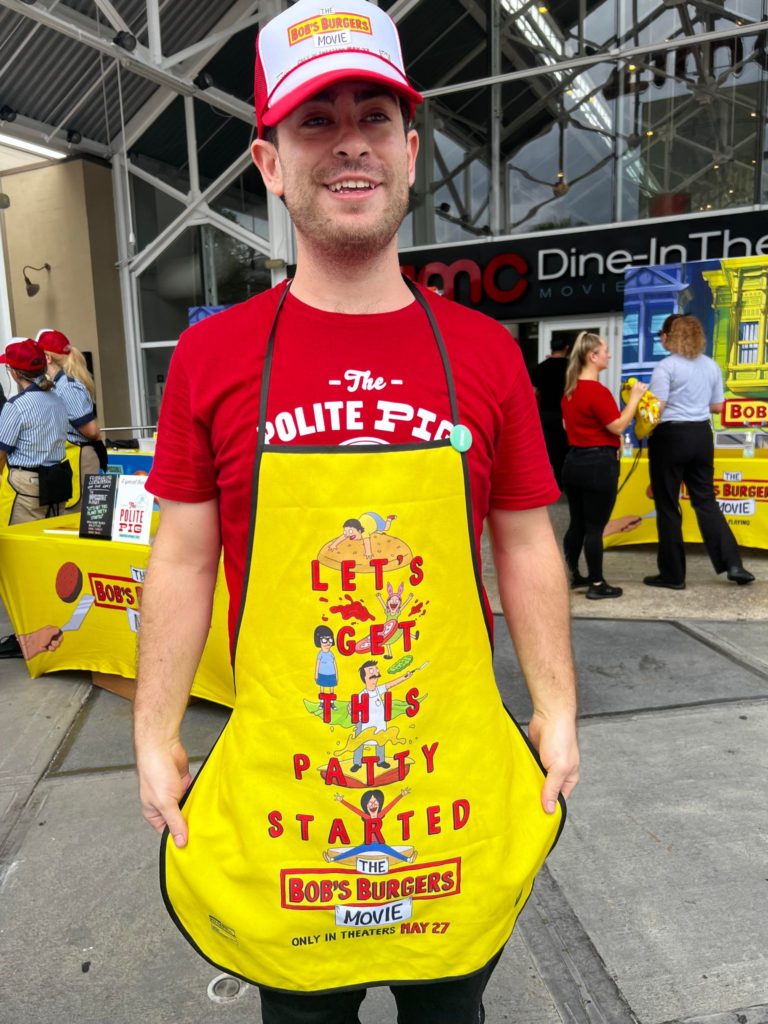 They’re super fun with a graphic print of the characters from the movie! 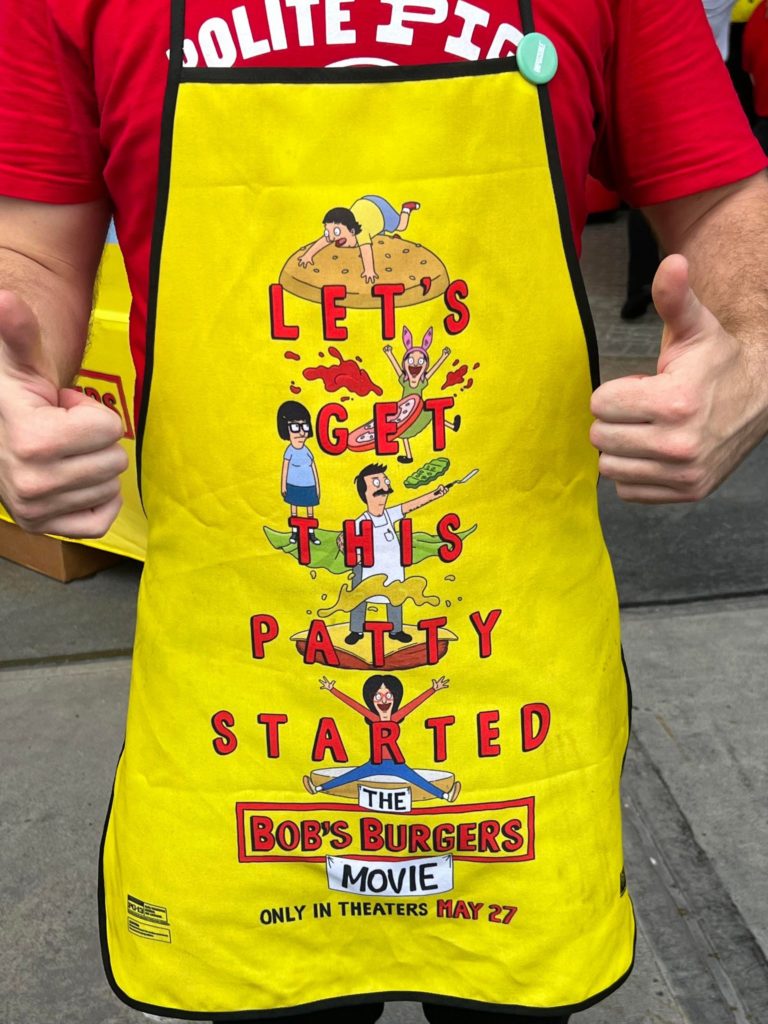 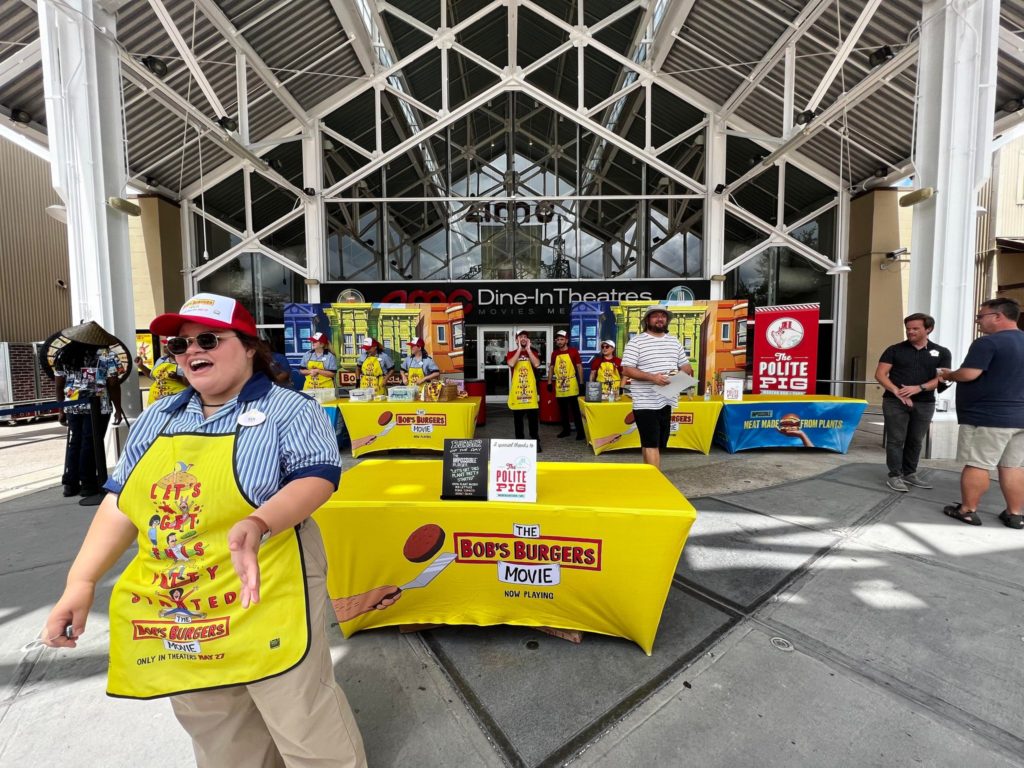 As you can see each of the burgers is adorned with an adorable little gherkin! 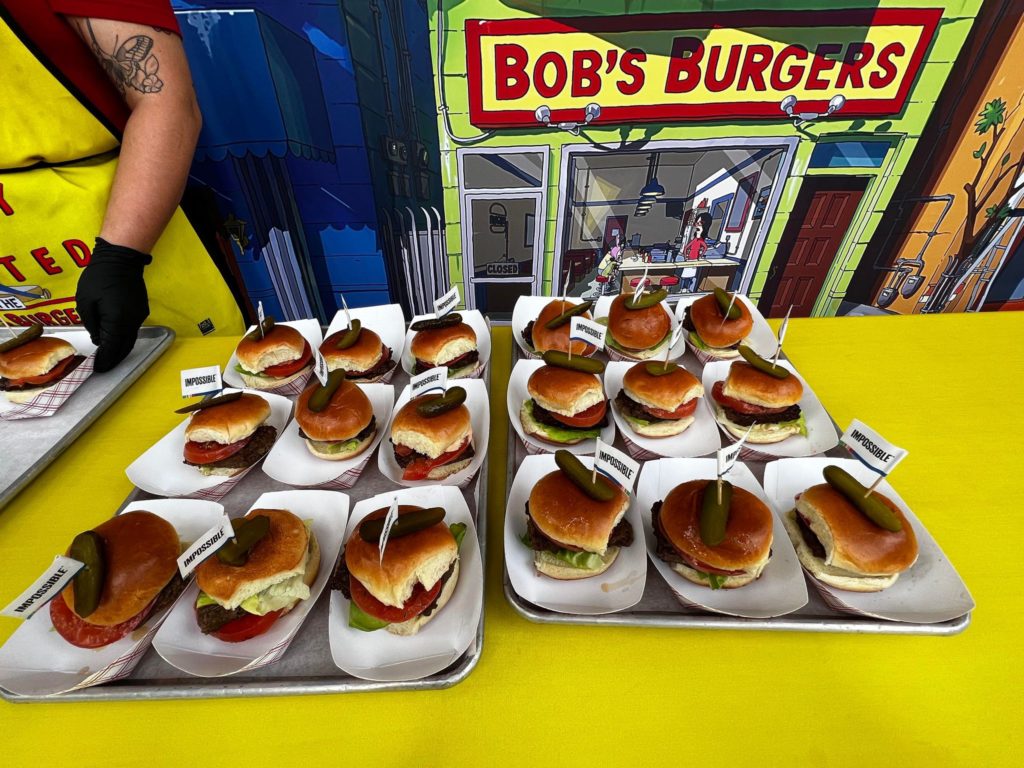 We of course had to sample the goodies! 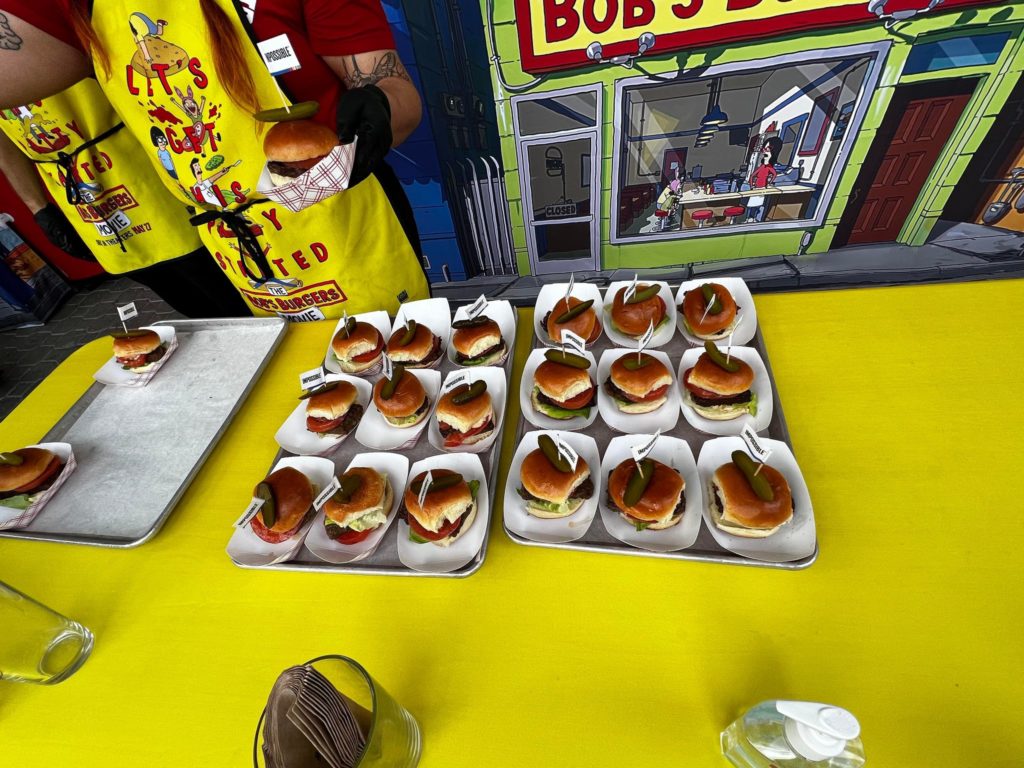 This made for the perfect early afternoon treat! 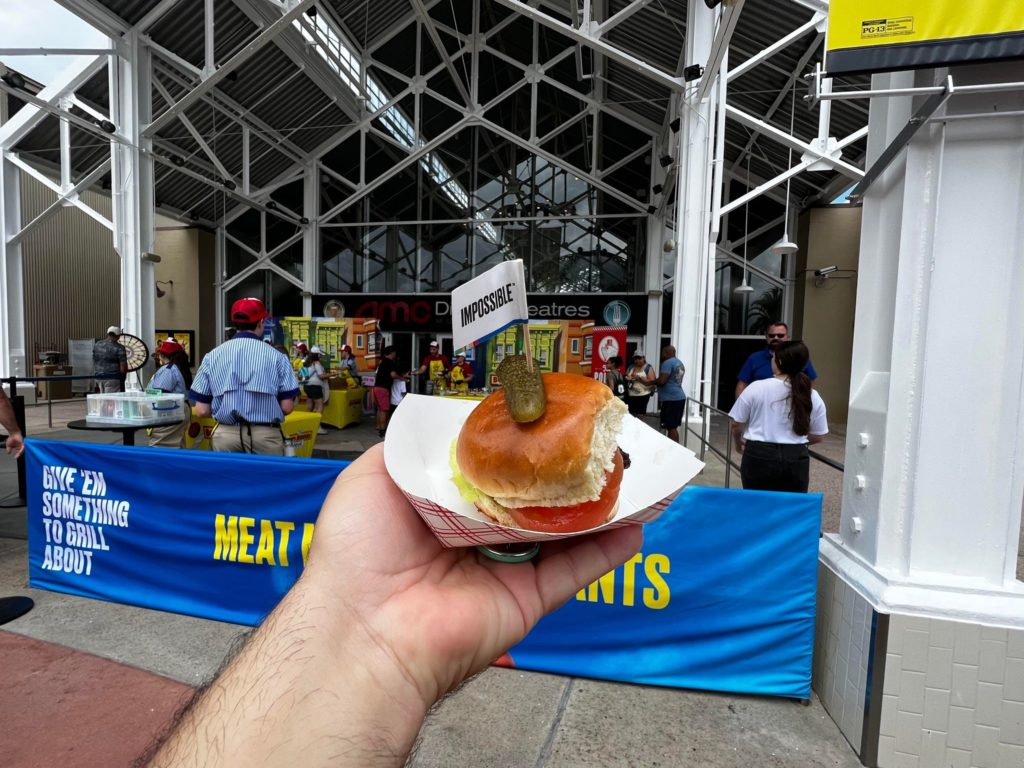 We aren’t sure whether or not they’ll be around all weekend but it’s definitely worth popping by! 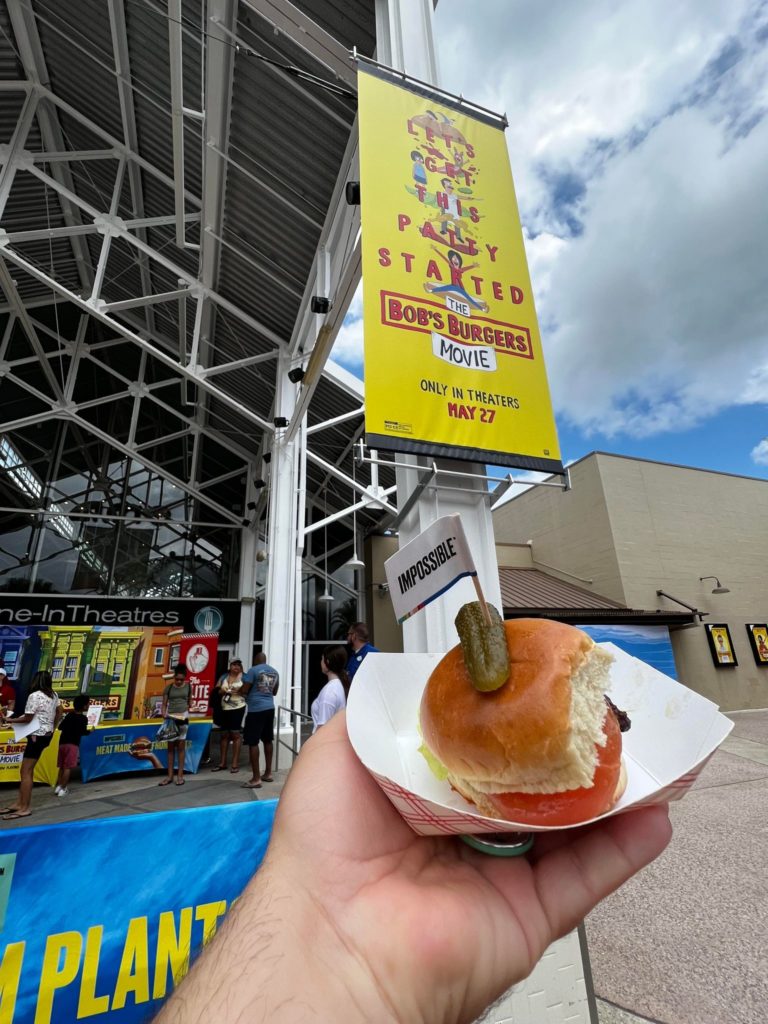 As we finish up our burger, its time to talk swag! 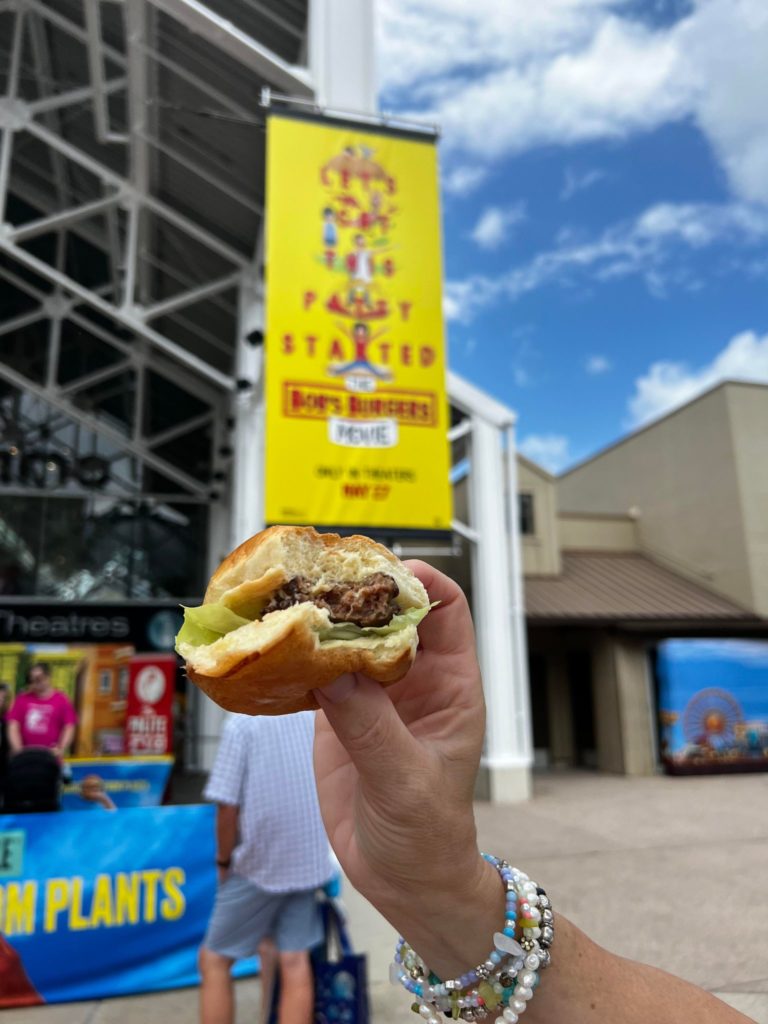 There is a wheel that you can spin to get a prize. 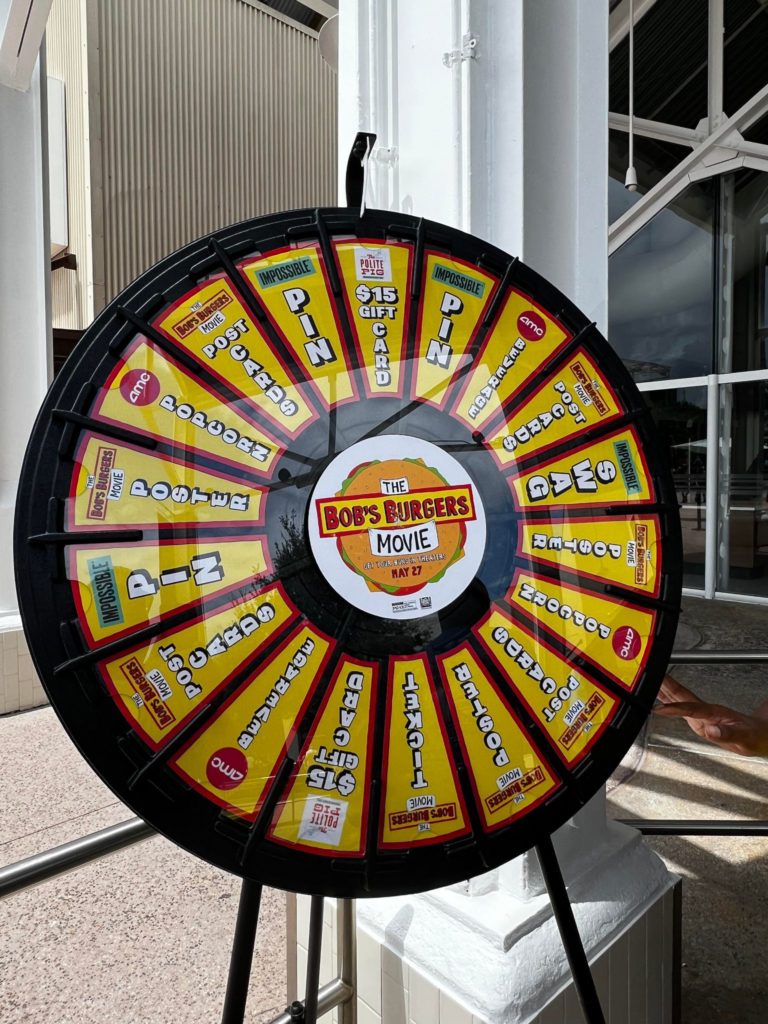 The options include Impossible pins. 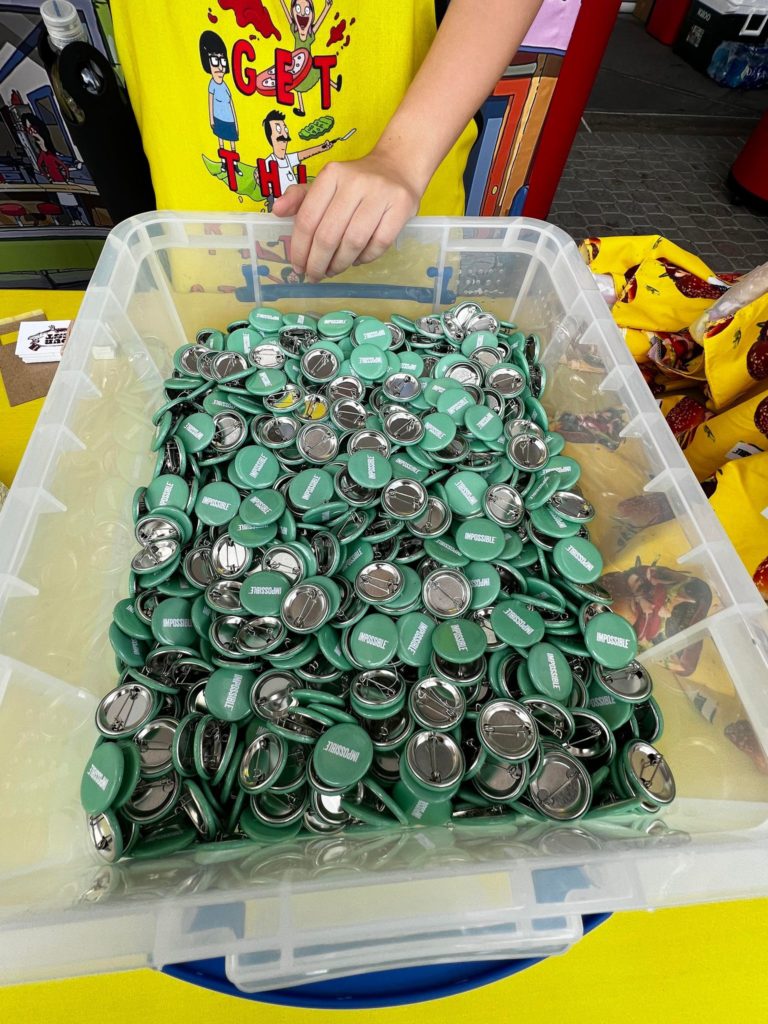 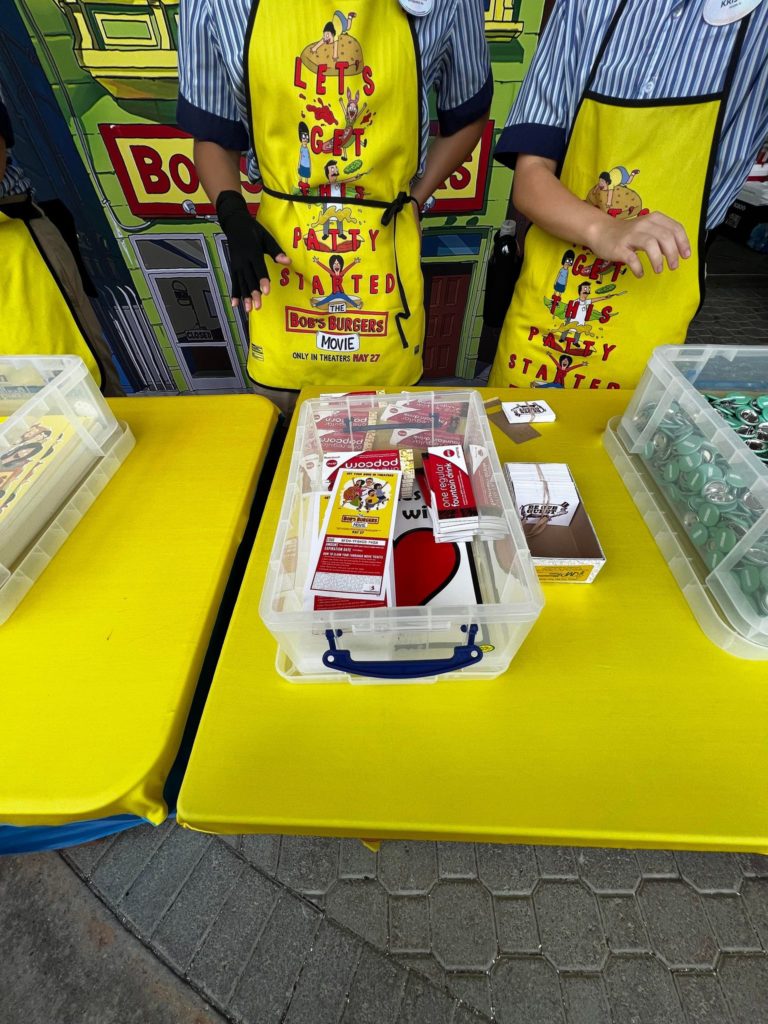 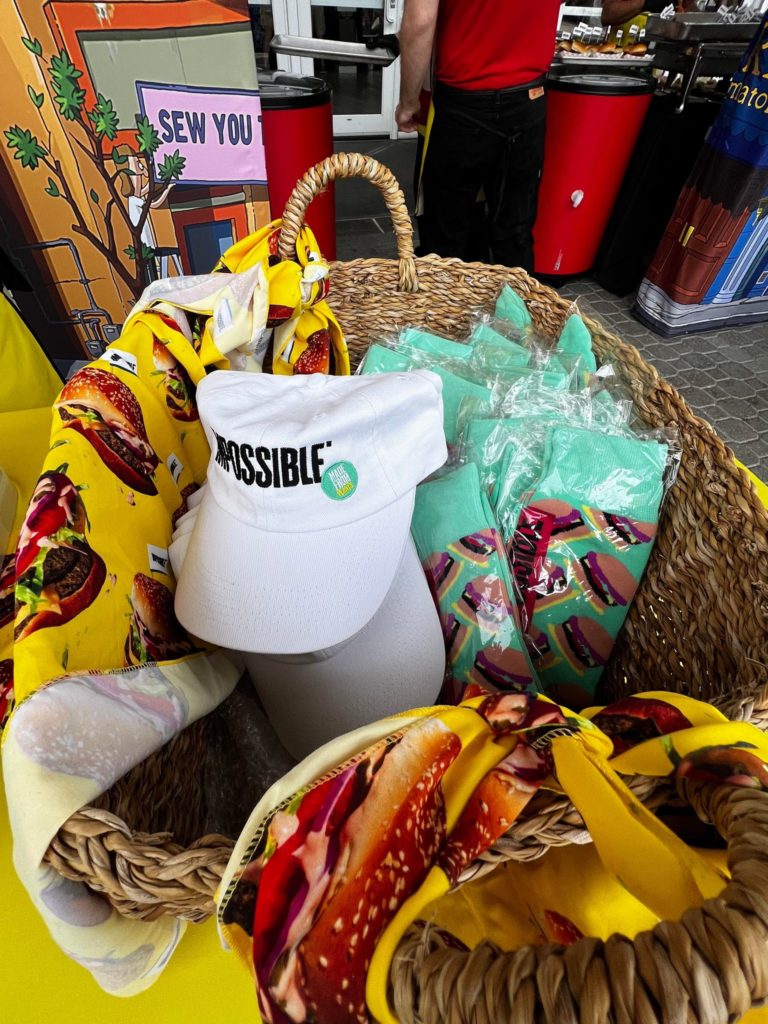 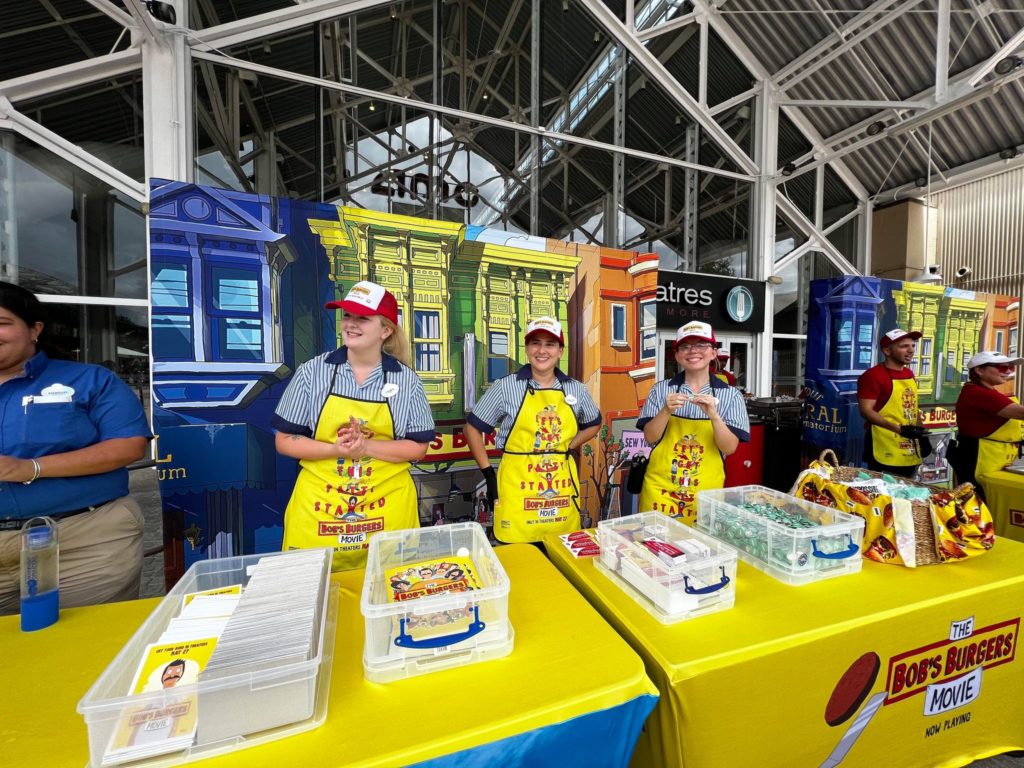 This was such a wonderful way to spend the afternoon.

You can’t miss the AMC theaters with its yellow banners. 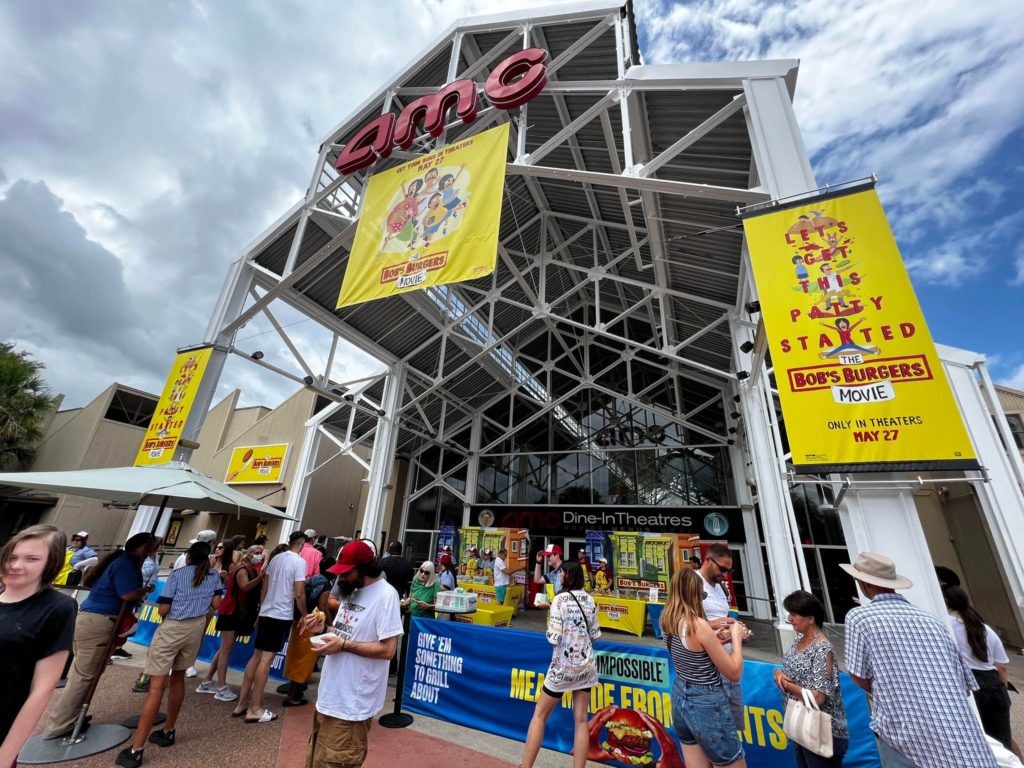 So pop on by and enjoy the fun.

From 20th Century Studios, The Bob’s Burgers Movie is a being described as an animated musical comedy-mystery based on the long-running Emmy-winning series. The story starts with a ruptured water main that creates a sinkhole right in front of Bob’s Burgers ruining the Belcher’s Summer plans in the process. 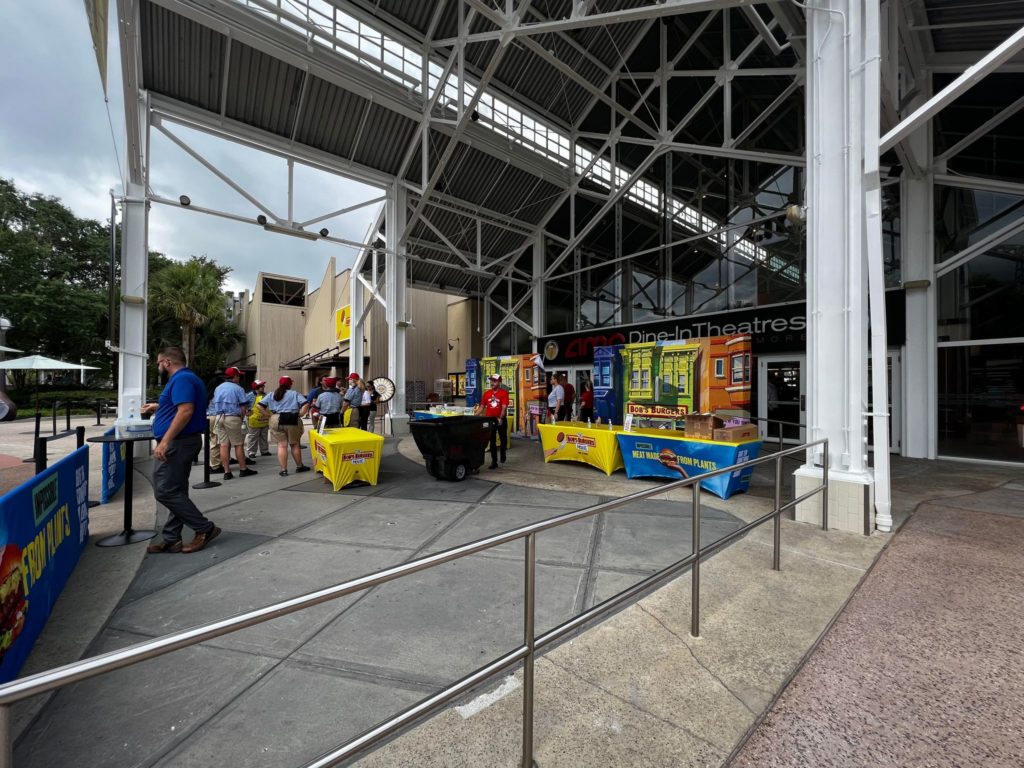 While Bob & Linda struggle to keep their business afloat the kids band together to save their family’s restaurant.  The film showcases the talent of  Kristen Schaal, H. Jon Benjamin, John Roberts, Dan Mintz, Eugene Mirman, Larry Murphy, Zach Galifianakis and Kevin Kline. The film was directed by Loren Bouchard & Bernard Derriman. The screenplay is by Loren Bouchard & Nora Smith. The producers are Loren Bouchard, Nora Smith and Janelle Momary. 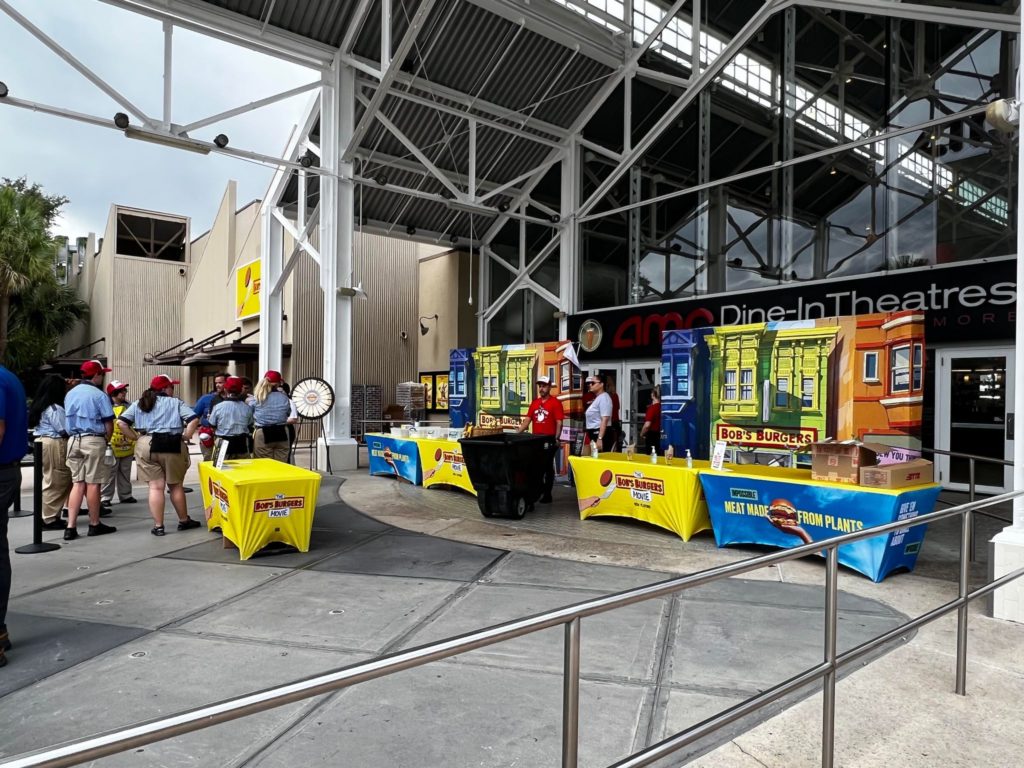 Readers are encouraged to keep following along with MickeyBlog for further Walt Disney World news and updates. We’ll be coming to you from the theme parks live each and every week.