Answer Dok Ondar’s Call and Vote for the Next Legacy Lightsaber Hilt!

Bright Suns! So much amazing info has been revealed at this year’s Star Wars Celebration in Anaheim. I’m here to talk to you about some of the latest merchandise that will be appearing at Galaxy’s Edge.

Panelists Brad Schoeneberg, Tracie Alt, Cody Hampton, Amanda Rubinos-Luna, Elisa Melchiori and John Henselmeier took to the Twin Suns Stage with host Amy Ratcliffe to give a behind-the-scenes look at how the merchandise of Star Wars: Galaxy’s Edge was created.

let’s take a look at some exciting new Lightsaber hilts coming soon to Star Wars: Galaxy’s Edge and other Star Wars retail locations at Walt Disney World Resort and Disneyland Resort. To celebrate the premiere of the new limited-series “Obi-Wan Kenobi” streaming now on Disney+, we got a first look at the new Obi-Wan Legacy Lightsaber Set, coming soon to Dok-Ondar’s Den of Antiquities and available for pre-order at shopDisney beginning May 31st at 7:00 a.m. PT. The Legacy Lightsaber Set includes the Lightsaber collectible based on the lightsaber used by the iconic Jedi Master in “Obi-Wan Kenobi,” and includes the blade, hilt, belt clip and display stand.

You’ll also be able to pick up a brand new plush during your travels to Batuu! Younglings will love cuddling up with this adorable Therii plush available only at Star Wars: Galaxy’s Edge at both Walt Disney World Resort and Disneyland Resort. Soon, you’ll be able to stop by the creature cart at Black Spire Outpost to bring home your very own Gorg plush!

Need somewhere secure to store your credits and valuables? Check out this new Camatono Case, featuring a customizable lock feature and a sleek cylindrical design that’s small enough to be tucked under the average humanoid’s arm – perfect for a quick getaway! Travelers can get their hands on these beginning tonight at Disneyland After Dark: Star Wars Nite and beginning May 31st on shopDisney.com.

You might remember that in 2020 we asked you to vote for which Lightsaber hilt you’d most like Dok-Ondar to add to his Den of Antiquities, and earlier this year the Cal Kestis Legacy Lightsaber Hilt was added to his collection. Dok-Ondar was so impressed with your last selection that once again, he’s asking you to cast your vote as he looks to expand his hilt offerings! 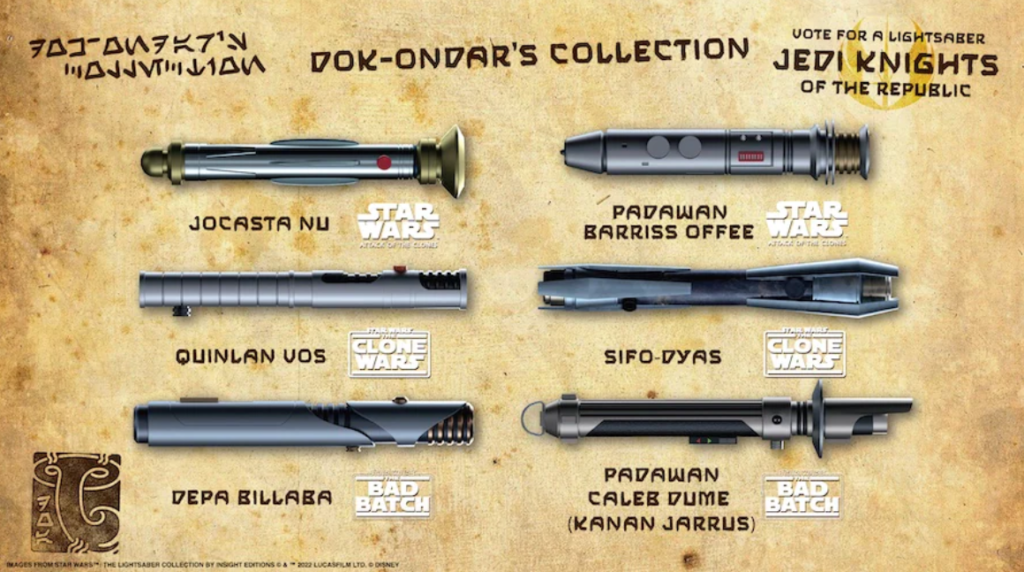 Beginning today, fans can vote below to let Dok-Ondar know which Lightsaber hilt they’d most like to be offered at Dok-Ondar’s Den of Antiquities within Star Wars: Galaxy’s Edge at Walt Disney World Resort and Disneyland Resort. These Legacy Lightsaber hilts are modeled after the lightsabers of heroic and legendary Jedi from across the galaxy, so make your choice and let us know below who’s hilt you’d most like to see next! Choose between the hilts of Jocasta Nu, Sifo-Dyas, Quinlan Vos, Depa Billaba, Barriss Offee, or Kanan Jarrus.

Vote now through June 10th and stay tuned to the Disney Parks Blog where we will announce the results this summer!