Anniversary, Glow in the Dark Tees Drop in Pandora: The World of Avatar

With the trailer for “Avatar: The Way of Water” racking up thousands of views per minute, the new merchandise released today at Pandora: The World of Avatar at Disney’s Animal Kingdom could not release at a better time. 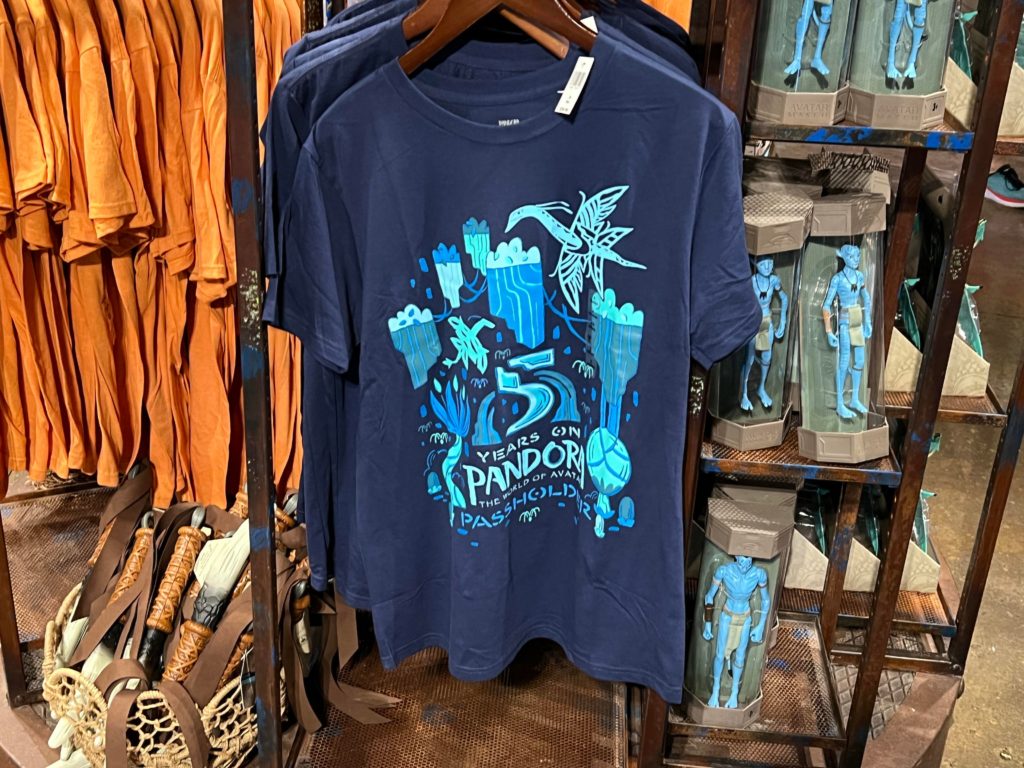 As the energetic yet tranquil addition to Disney’s Animal Kingdom, Pandora: The World of Avatar marks its fifth anniversary on May 27th. Not only does the space burst with color and unique environmental features, it also introduced two immersive attractions to the theme park: Avatar Flight of Passage and the Na’vi River Journey. 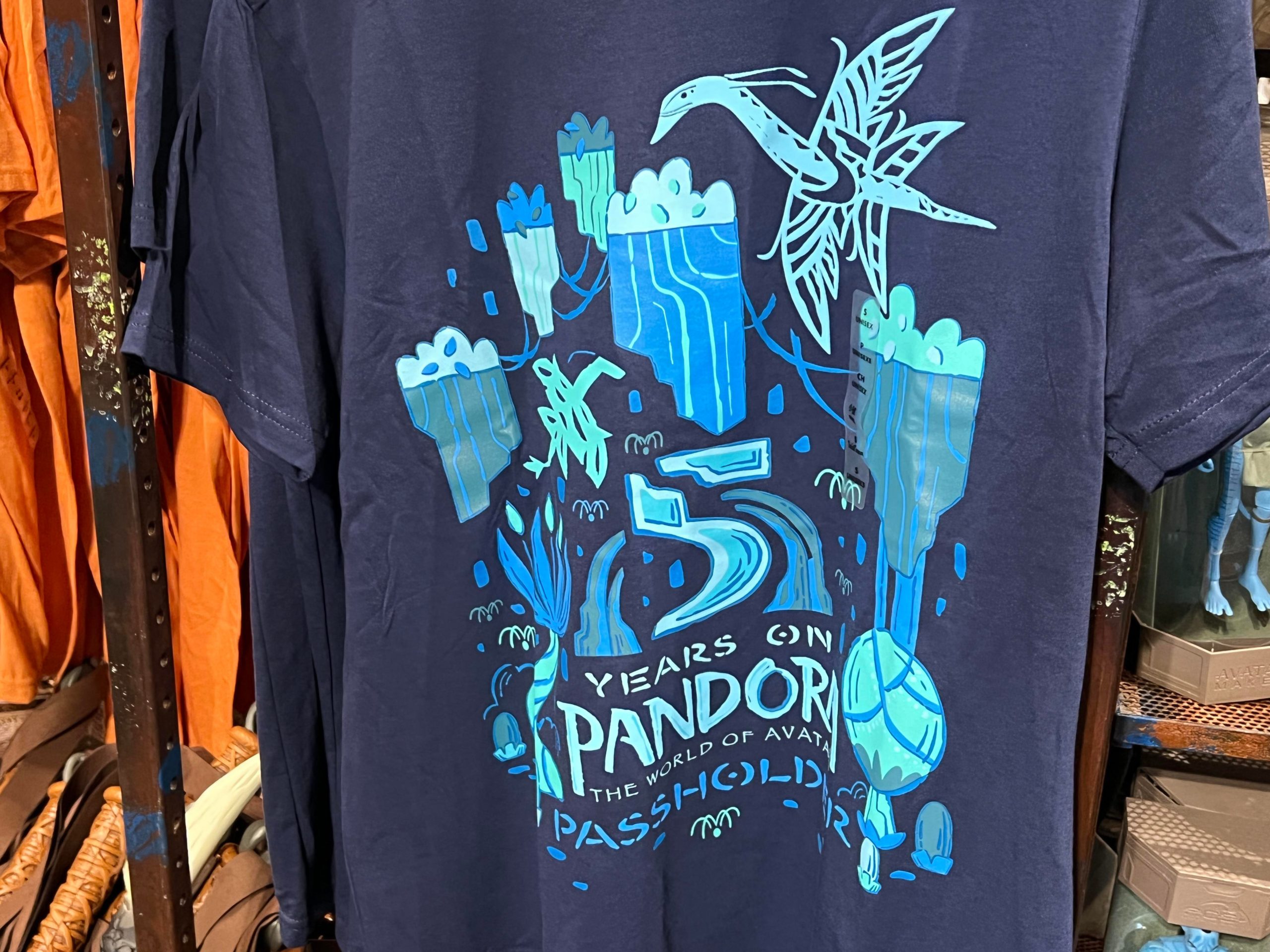 To mark the occasion, passholders can pick up this $29.99 navy blue cotton tee that showcases the hues of the water effects throughout the land, including waterfalls that appear to fall from the mountains that encase the signature floating islands. 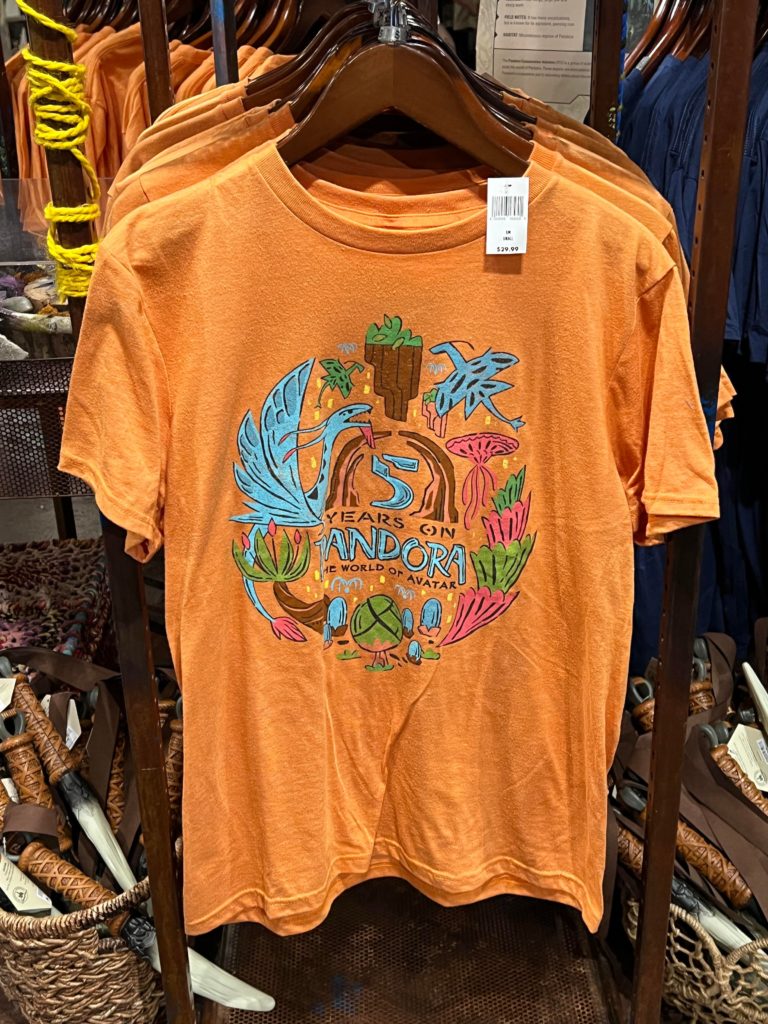 For non-passholder fans, a colorful new orange anniversary tee pops with the signature blue of the Na’avi used on two banshee as well as on the typography. Varying plants on other speices also float throughout the design of the $29.99 t-shirt. 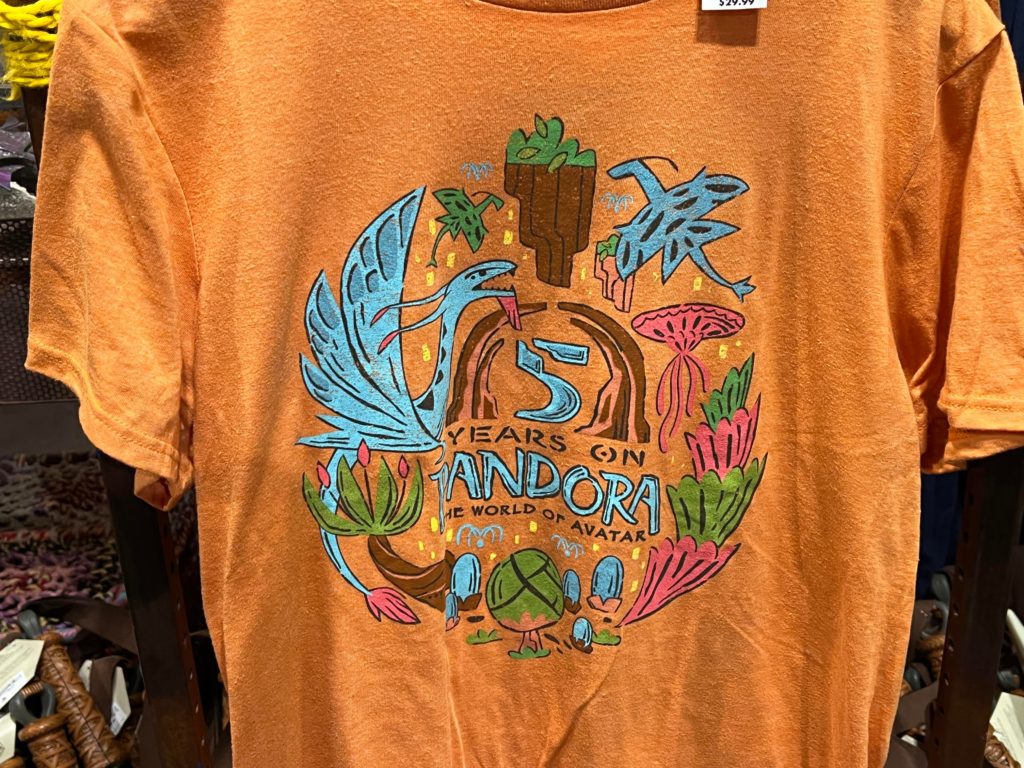 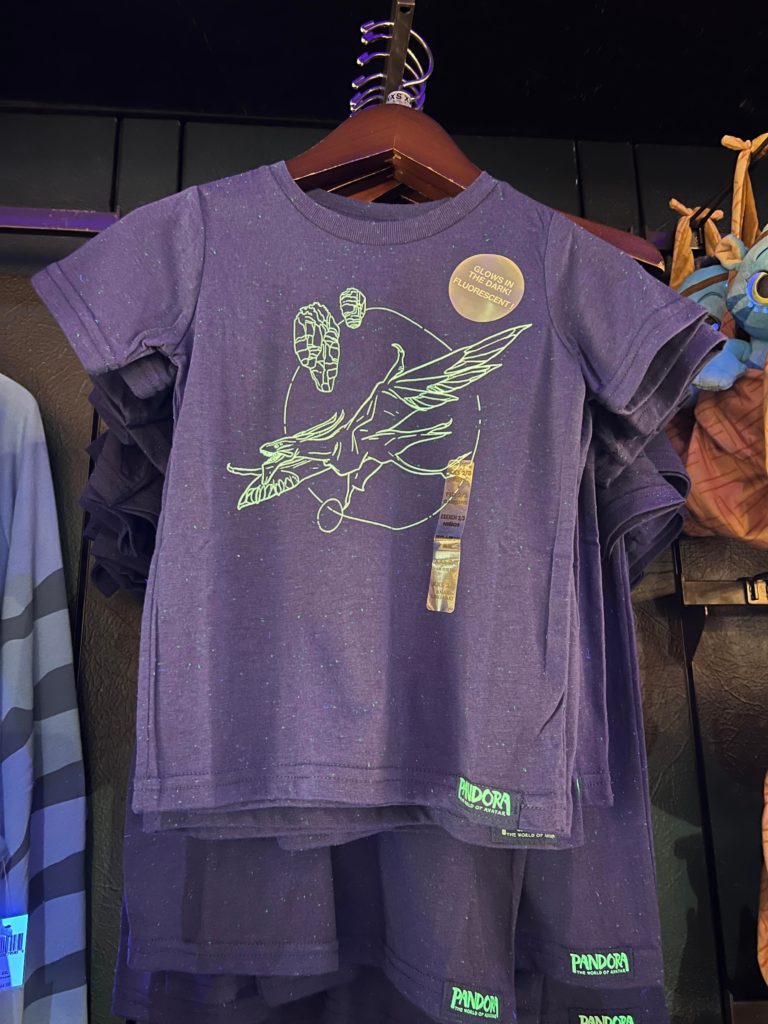 The wings of the banshee soar in the first of many new irridescent designs. The tees use a green speckled purple cottton as the base to allow the glowing features to appear almost 3-D. 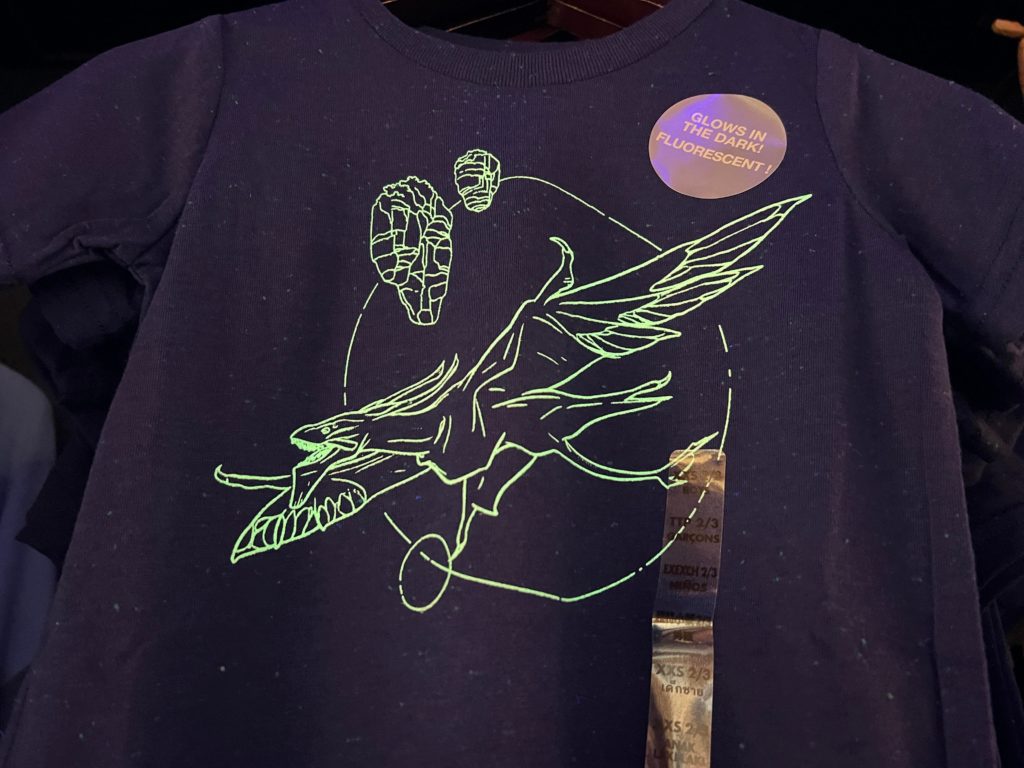 The loose-fitting design above comes in a variety of kids sizes and retails for $24.99. 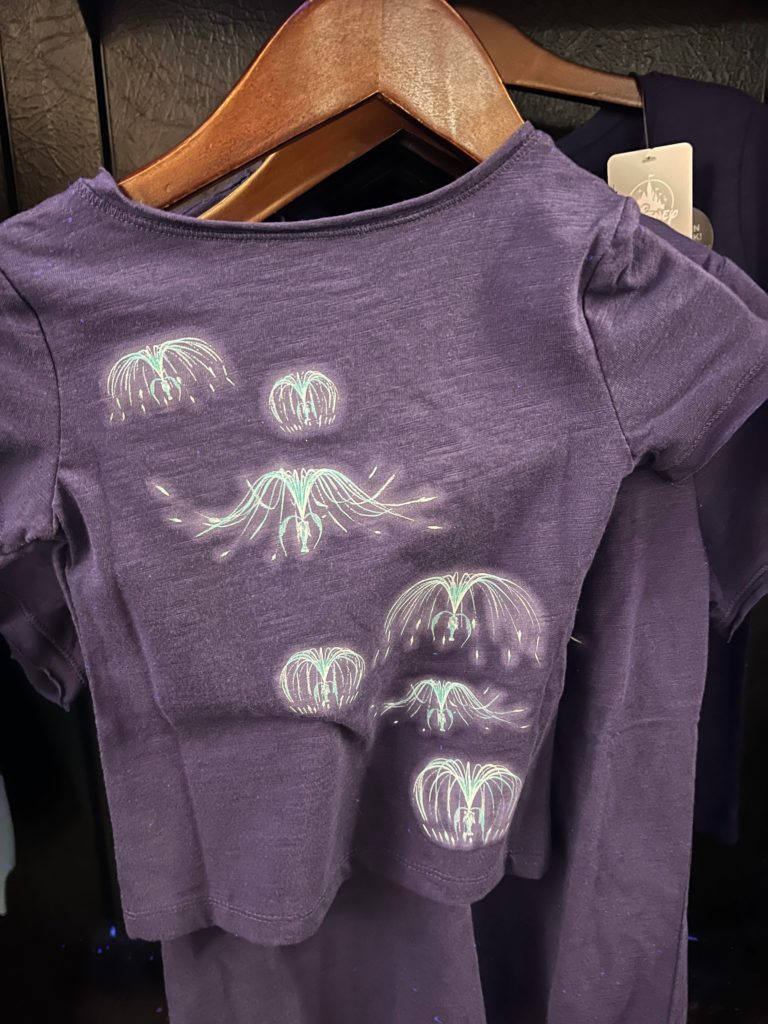 The woodsprites feature prominently in another design that uses a looser hem at the collar as well. The seeds float on the $24.99 tee as they do in both the film as well as in the two major attractions at Disney’s Animal Kingdom. 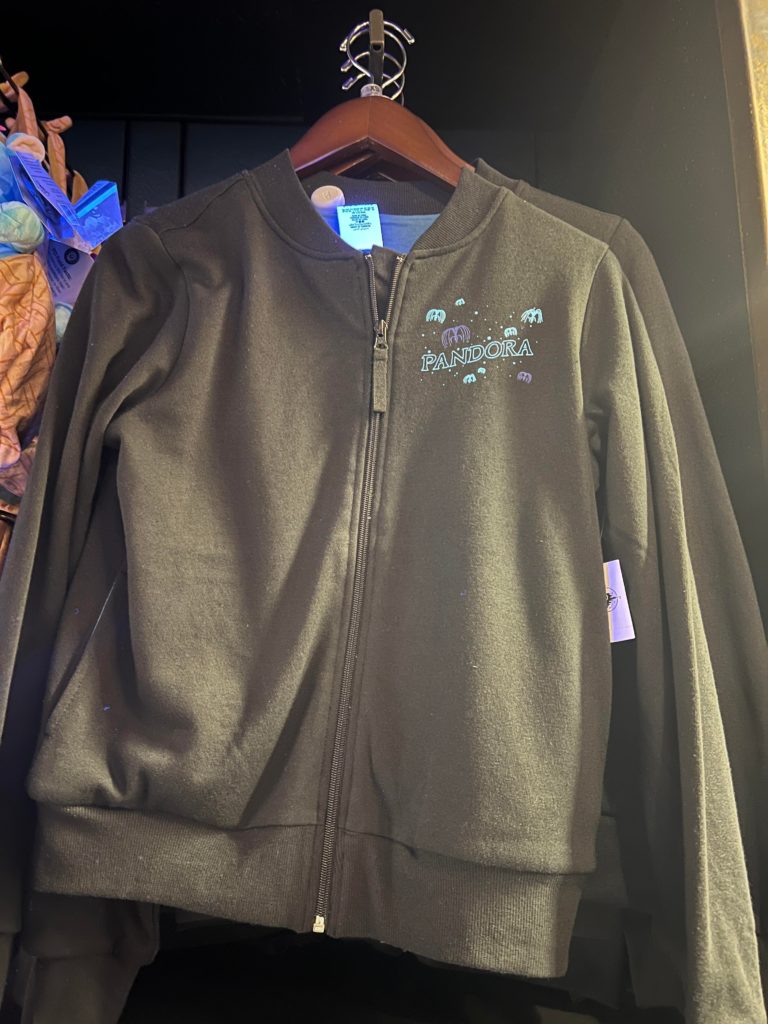 A new sweatshirt takes on a fitted and zipped design that resembles more of a jacket than a casual sweatshirt. The $79.99 sweatshirt again utilizes the woodsprites on the front as well as the lands bold font. 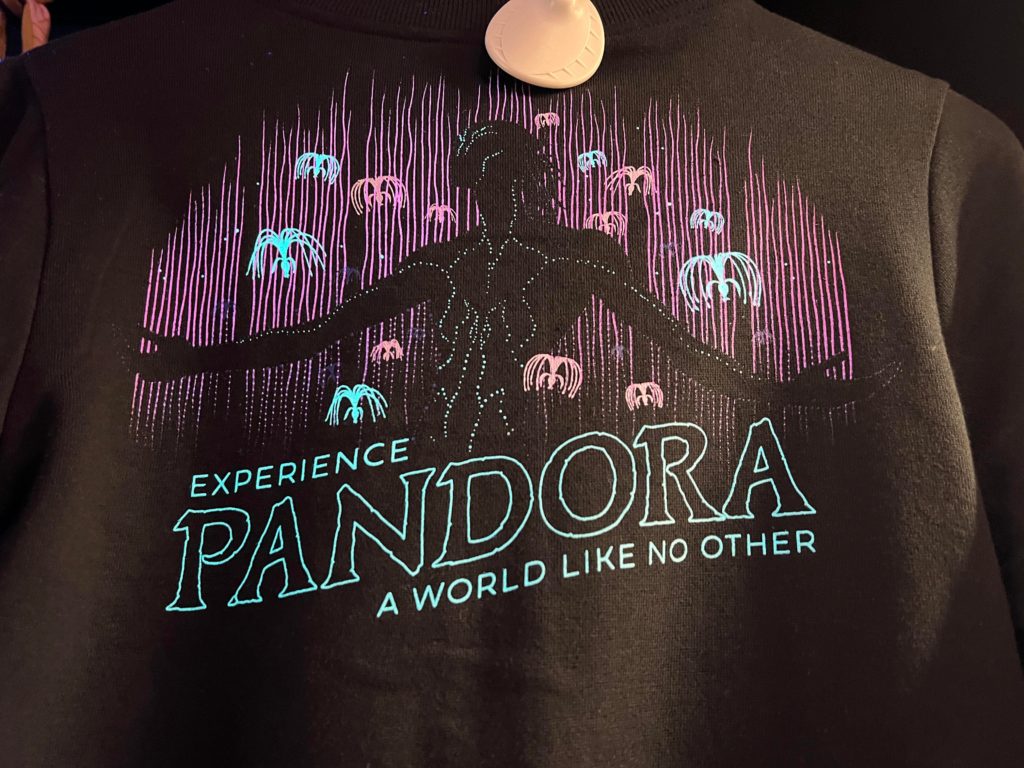 The artistry on the back of the shirt sets this piece of apparel apart from the others. The Shaman of Songs appears to embrace the woodsprites as they follow on their mystical path. 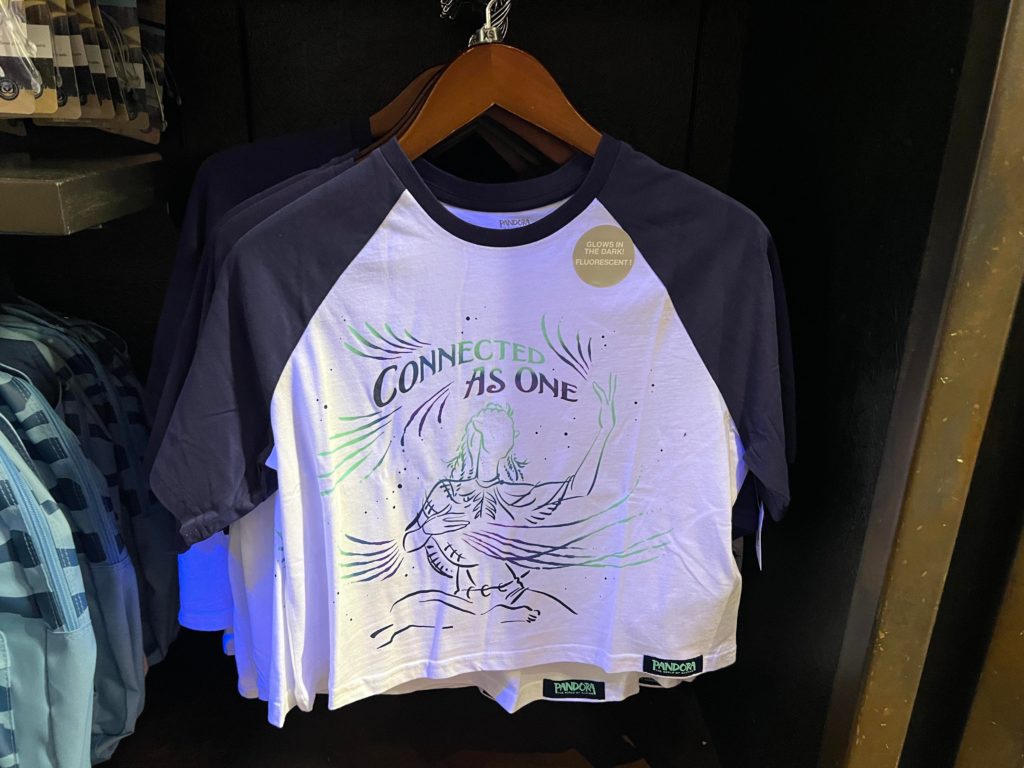 The Shaman also celebrates the spirit of togetherness on a new jersey-style tee. With navy sleeves and a white base, the Shaman’s connectedness shines not only thanks to the text but also the fanciful sketchwork. The tee retails for $36.99. 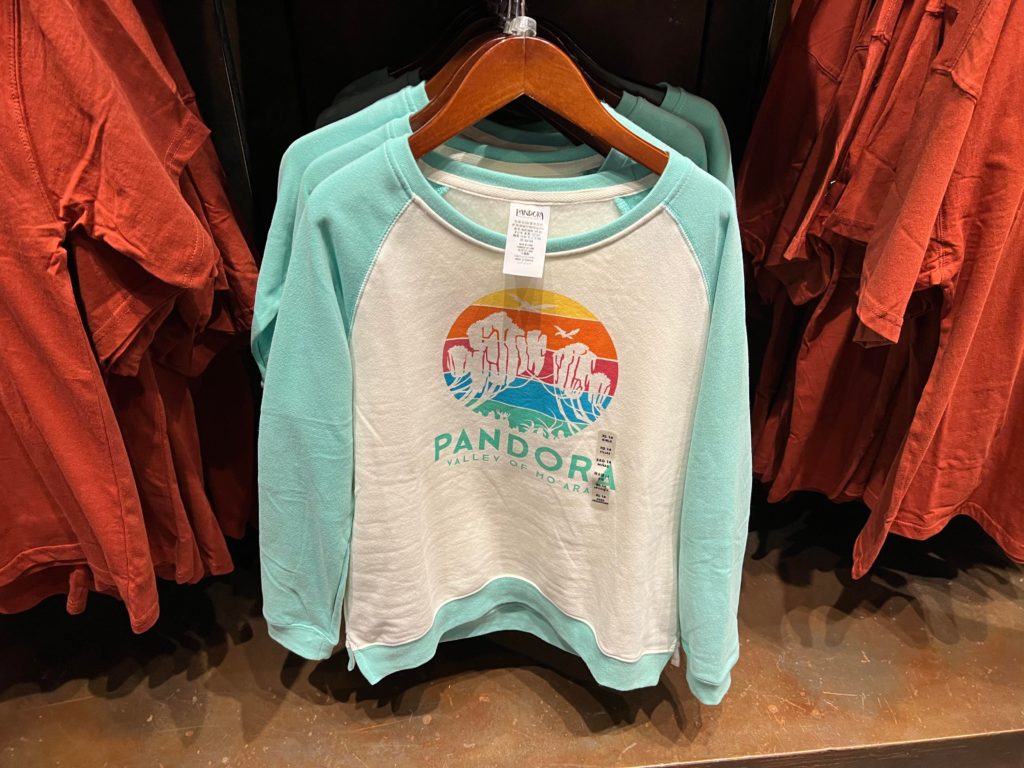 The Raglan design extends to new long-sleeved tees spotted today as well. Retailing for $39.99, the shirt above evokes thoughts of national park visits with its design and logo for “Pandora, Valley of Mo’ara.” 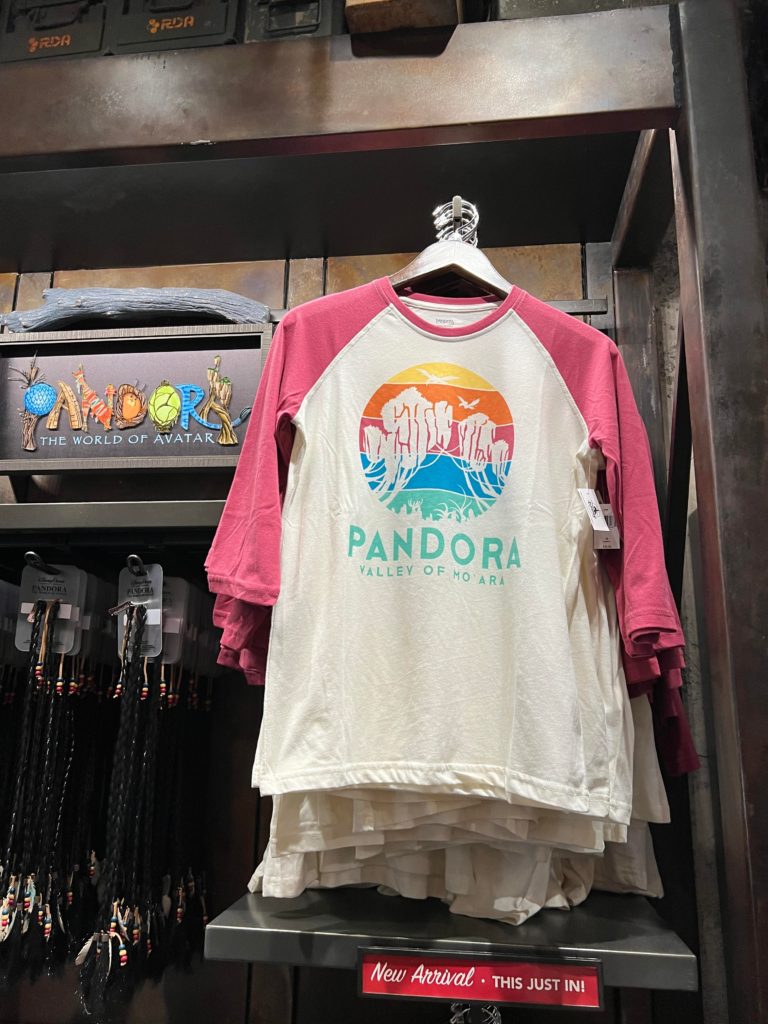 Another three-quarter-length sleeve Raglan tee takes a more quirky tone to the same logo designs with its emphasis on pink. This tee sells for $39.99 also. 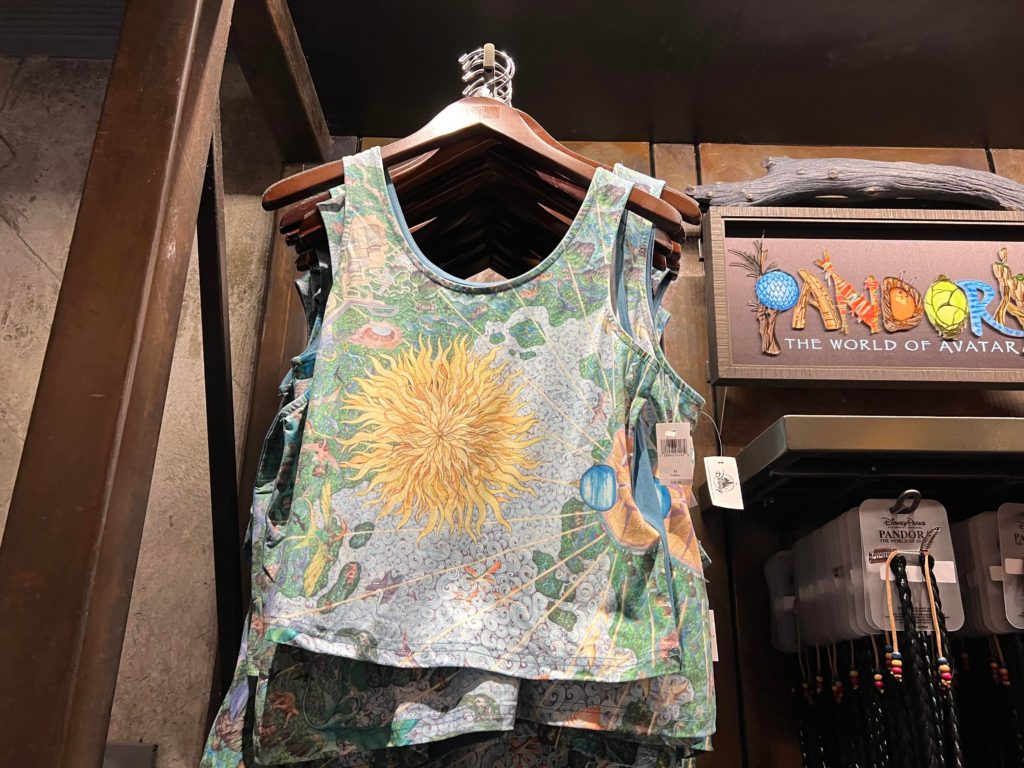 A new tank shines bright with the abundance of ecological features that exist in the land and the fictional movie backgrounds. 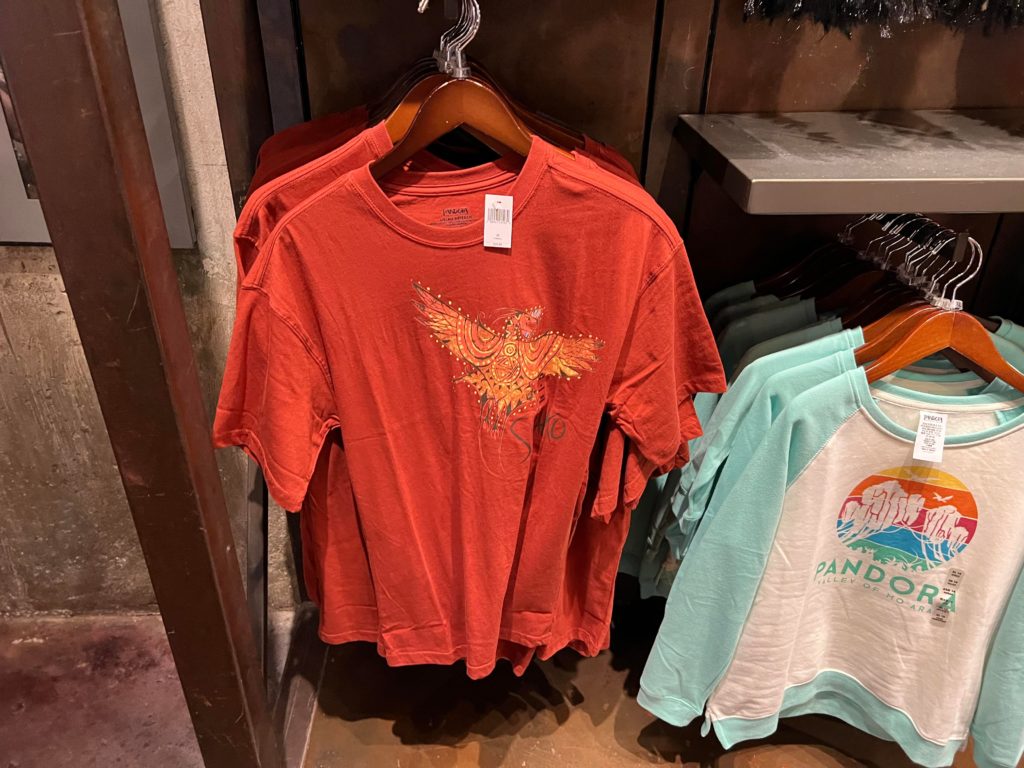 While one more new t-shirt design shines a light on the apex predator of Pandora: the Great Leonopteryx. “Sivako” appears written next to the creature, encouraging those who wear the tee to “Rise to the Challenge.” 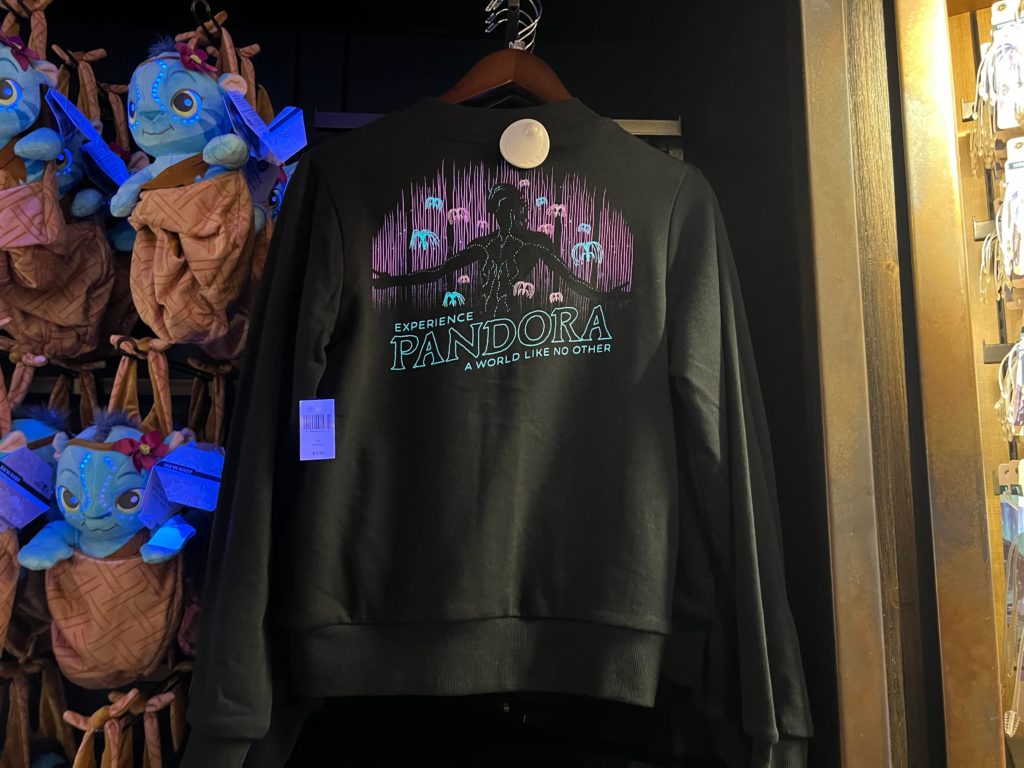 We spotted all of these new items at Windtraders Shop, the merchandise location inside Pandora: World of Avatar. To find this, either head to the exit of Avatar Flight of Passage or go just around the way from Pongu Pongu Lounge.