The glitz and glamour of Hollywood took centerstage tonight for the 94th annual Academy Awards. A few lovely members of Disney royalty even took their moment on stage to present to award for Best Animated Feature Film. The three live-action Disney Princess film stars that brought a touch of heroine to the stage included Lily James (“Cinderella”), Naomi Scott (“Aladdin”), and Halle Bailey (“The Little Mermaid”).

Largely known for their roles in bringing Disney princesses to life, the ladies brought the same joy and optimism to presenting tonight. As they opened the envelope, all three burst into smiles to announce the category winner, “Encanto.” 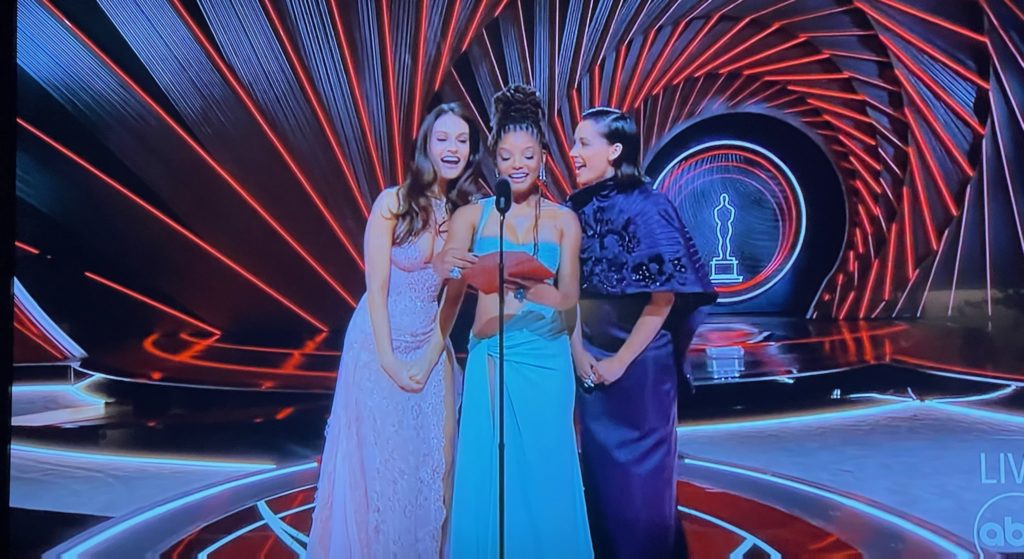 Though James and Scott have moved on from their roles as Disney heroines Cinderella and Jasmie respectively, Bailey is currently still filming her debut into the franchise. She stars as Ariel in the upcoming “The Little Mermaid” feature film due out next year. When asked on the red carpet tonight about her favorite vocal moment in the show, she quickly replied, “Part of Your World” (and how could she not?).

Though not princess-centric, the category also included Walt Disney Animated Pictures’ “Raya and the Last Dragon” and Pixar Animation Studios’ “Luca.” Already, Walt Disney Pictures can claim another win as well. Earlier, Ariana DeBose took home the award for Best Supporting Actress in a Feature Film for her work in “West Side Story.” Many await the award for “Best Song.” With a win for “Dos Oruguitas,” Lin-Manuel Miranda would complete not only an EGOT but a PEGOT (Pulitzer, Emmy, Grammy, Oscar and Tony).