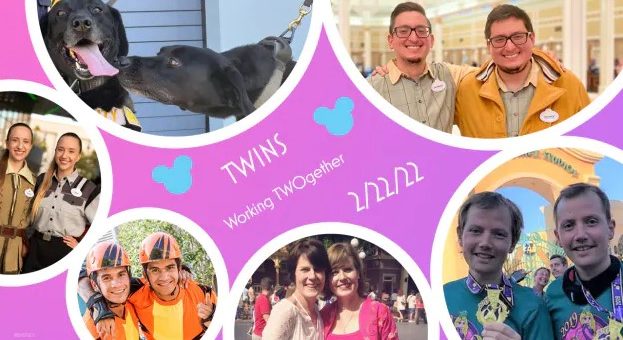 Here they are in action on TikTok:

Kaisha and Erika are now on their third Disney College Program at the Walt Disney World Resort!

Rodolf and Randolf started at Hong Kong Disneyland when they were 22 years old!

These twins are from the Philippines and can be seen as dancers at Hong Kong Disneyland.

Wendy is a recruiter at the Disneyland Resort and Cindy works in training and entertainment.

Wendy make look familiar – she was the 1989 Disneyland Ambassador!

This is one dedicated Disney family – Wendy’s husband used to work at Disneyland, one child currently works in the parks and two are former cast members.

Two of Cindy’s children currently work in entertainment at Disneyland!

Emanuel and Mauricio are identical twins – and work in identical roles!

These brothers are part of the Disney College Program and support the concierge team at Disney’s Port Orleans Riverside Resort.

I think we’ve saved the best for last! These adorable pups are twins and serve guests at Walt Disney World as security personnel.

Didn’t make it to Disney in 2021!? Well we’ve got some fantastic news – Disney vacation packages are currently available to book through the end of 2022! That gives you plenty of time for a magical Disney getaway and I’m here to help.

With new policies and procedures in place during the year ahead, there’s never been a better time to work with an Authorized Disney Vacation Planner who can help you navigate through Disney’s new way of doing things!  I’ll be on hand to assist with everything from finding that perfect package and getting the best deals to organizing park passes, Disney Genie+ and dining reservations. Best of all- my services are ABSOLUTELY FREE!

Just fill out my form HERE to get your FREE, no-obligation quote. Or reach out to me below at jbannon@mickeytravels.com or follow along on Facebook.