The premiere date for “Torn” has just been announced by Disney+. On February 4, 2022 viewers will be able to experience the life of legendary climber Alex Lowe, whose body was recovered 17 years after his death.

The intense personal journey of Lowe-Ankers was captured by director Max Lowe and producer Chris Murphy, along with Lightbox’s award-winning producers Simon Chinn and Jonathan Chinn. From National Geographic Documentary Films, “Torn” had its world premiere at the 2021 Telluride Film Festival and won the award for Best Feature Film at BANFF. RogerEbert.com has called “Torn” a “cinematic gift”.

On Oct. 5, 1999, Alex was tragically lost alongside cameraman and fellow climber David Bridges in a deadly avalanche on the slopes of the Tibetan mountain Shishapangma. Miraculously surviving the avalanche was Alex’s best friend and climbing partner, renowned mountaineer Conrad Anker. After the tragedy, Anker and Alex’s widow, Jennifer, fell in love, married, and Anker stepped in to help raise Alex’s three sons. 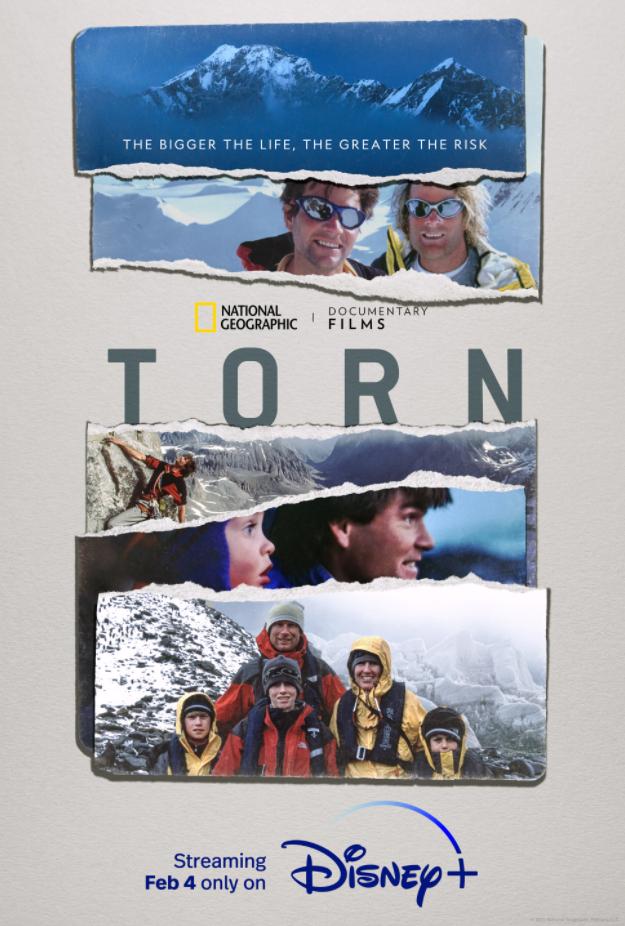 In 2016, 17 years after their deaths, Lowe’s and Bridges’ bodies were discovered, and Lowe’s family journeyed to the remote Himalayan mountains to recover the men’s remains. In the powerful and deeply moving “Torn,” director Max Lowe examines the long-buried feelings that the discovery unearthed for him and his family members. Weaving together archival footage of Alex’s spellbinding adventures, revealing home movies and emotional interviews with Jennifer, Sam, Isaac and Conrad, Lowe challenges long-held family myths and questions his own beliefs as he creates an insightful examination of fatherhood, love, loss and resilience set against the high-stakes world of professional mountain climbing.

“I have put everything of myself into ‘Torn,’” said director Max Lowe. “A film truly unique in my career in its detailing of my own family’s heart opening exercise in vulnerability around our shared trauma, redemption and love. I couldn’t be more honored and thrilled to be able to share our story with the world on one of the biggest stages with our upcoming Disney+ launch.”

National Geographic Documentary Films previously released the Academy Award, BAFTA and seven-time Emmy® Award-winning film “Free Solo” and the Academy Award-nominated film “The Cave.” Other critically acclaimed films under the banner include E. Chai Vasarheyli and Jimmy Chin’s “The Rescue,” Liz Garbus’ “Becoming Cousteau” and Ron Howard’s “Rebuilding Paradise;” Sundance Audience Award winners “Science Fair” and “Sea of Shadows;” Emmy winners “LA 92” and “Jane,” both of which were included in the top 15 documentaries considered for an Academy Award in 2017; and Dupont Award winner “Hell On Earth: The Fall of Syria and the Rise of Isis.”