More than a Christmas comedy, Hawkeye has ignited the imagination of MCU fans with a fictional stage play; leading us to ask, Dear Marvel, please make Rogers: The Musical a real thing; Sincerely, Everyone.

The MCU’s next Disney+ exclusive series is just on the horizon as Hawkeye is looking to be the coolest thing coming this holiday season; with the newest adventures of the arrow-wielding Avenger, we’ve also been shown one of the most interesting happenings within the universe itself.

Many fans took note of the fictional production of Rogers: The Musical; a stage play set within the Universe of the Marvel Films, that apparently tells the story of Steve Rogers and the early days of his adventures with the Avengers.

The brand new Marvel series gave fans a first look at the fictional play, with a brand new trailer giving viewers some more scenes of the incredible Broadway production.

I believe I speak for all Marvel fans, however, when I make known how desperately I want to see a real Rogers: The Musical.

Many theater-loving Marvel fans have taken to Tik Tok and other social media platforms to give their own two cents on how a genuine production of Rogers: The Musical could be constructed, and performed.

#marvel teased us with #rogersthemusical so I’m making it real. Ft. the incomparable @cayleigh.capaldi as Peggy Carter. What song is next???

The ultra-talented fanbase has gone as far as organizing a faux setlist of song titles and moments, composing their own original works that could appear in the production, and even filming videos of how the stage play could look.

It is incredible to consider a Hamilton-style production based around the First Avenger, and it is incredibly cool for Marvel to create such an interesting easter egg to put within their own universe.

♬ original sound – For The Lore

The history of modern stories and films being made into theatrical production is robust; so it is not entirely unfathomable to consider a fictional world in which Rogers: The Musical exists as an in-universe commentary on the Broadways penchant for adaptation.

But could Rogers: The Musical also exist as a real thing in our own timeline?

Could a special, Disney+ run, half-hour live musical production of excerpts from the Steve Rogers Musical become a reality?

The chances are, it won’t; but we can all dream can’t we? 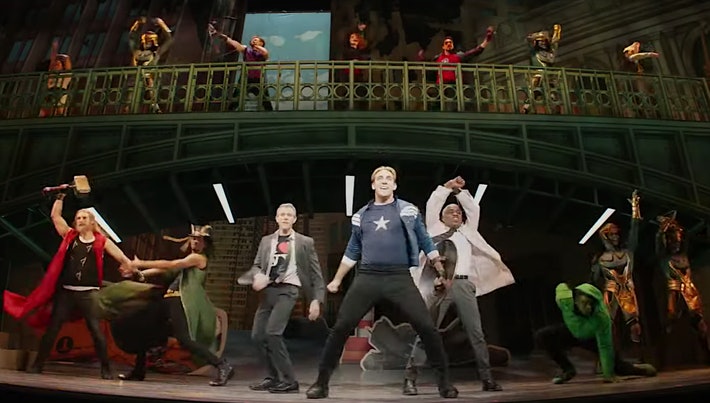