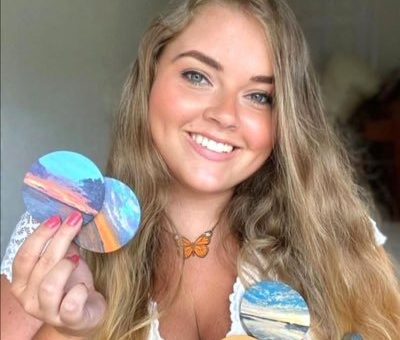 Using painting as a way to cope with her grandfather’s illness and passing, artist Sophie Lewis of South Wales channeled her talents to not only remember her beloved relative but also to cope with the mental toll of the past year and a half. Recently, her chronicles of creating a 3D piece featuring the balloon-elevated home from Pixar’s “UP” went viral.

.@MakeIt_Soph, from South Wales, UK, recreated the house from Pixar’s “Up” as a way to pay tribute to her late grandfather. ❤️ https://t.co/kWY5S6eOU4 pic.twitter.com/kEuH2orp8e

“With the painting stuff, it helped me in a relly dark place, and my model-making stuff had come from something I’d known how to do in university. Combining the two felt like a natural step to do,” Lewis said in a piece featured on “Good Morning, America” Twitter page.

Using a canvas that was left broken after a relocation, Lewis puporsely chose the imperfect base for her piece “as a reminder that something broken can be rebuilt into something beautiful,” according to the interview.

A true tinkerer, Lewis repurposed a number of items lying around her studio to create the playful and heartwarming piece. Inspired by a rainbow collection of tiny styrofoam balls, the artist “just kind of wing’ed it” in creating the design that utilizes both 2D and 3D design. She documented her progress on the piece on her Instagram page as well as on TikTok.

According to the Good Morning America piece, almost a million people followed the artist’s creation on TikTok as well. Even using social media to share her progress took inspiration from her beloved grandfather.

“When he passed away, it’s kind of taken on something he liked to do because, as kids, he used to document Christmases and birthdays on video. He was probably the original vlogger really … just kind of a push to carry on what he was doing,” Lewis said in the interview.

Fans can view more of Lewis’ art on her personal website and social media channels.