When Rivers of Lights closed for good at Disney’s Animal Kingdom, the park earned a frustrating asterisk.

Until this week, Animal Kingdom was the only Walt Disney World theme park without any type of daily or nightly presentation.

Well, I have some good news on that front. Animal Kingdom now has another daily show.

Here’s what you need to know about Disney KiteTails. 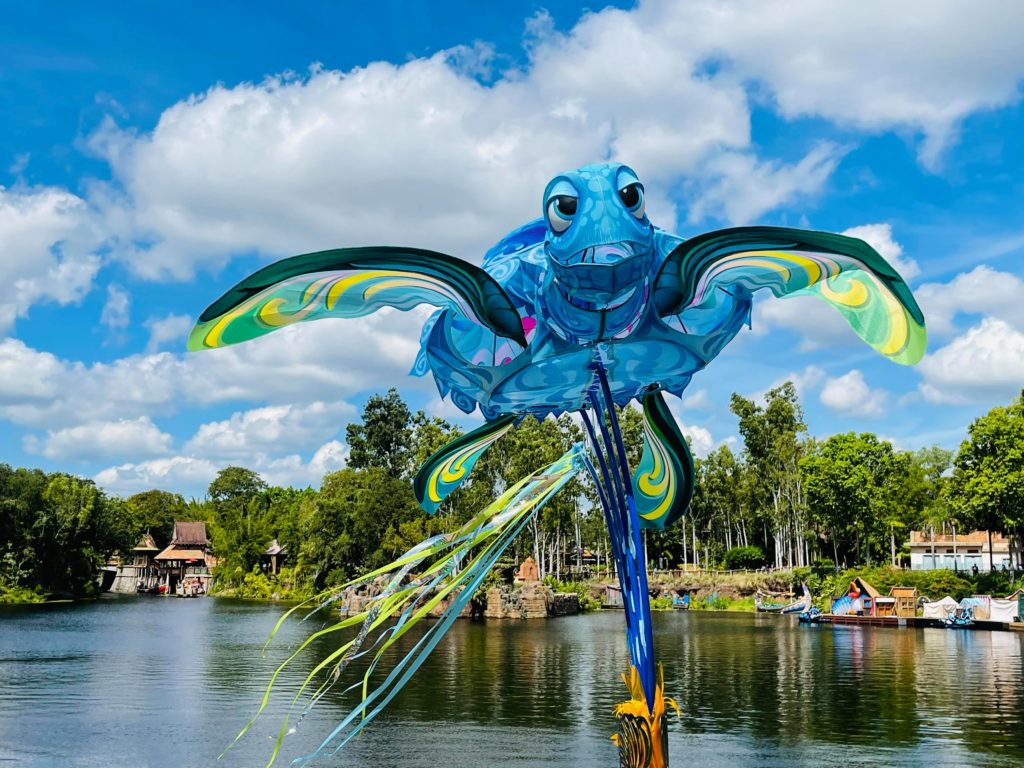 What Is Disney KiteTails?

Have you visited Animal Kingdom recently? If so, did you watch any of the Cavalcades that the park hosts?

Many of them cross the waters of Discovery River near DinoLand U.S.A. And that site may seem familiar to you.

Disney previously provided seating for Rivers of Light at Discovery River Theater…and they’re doing so again for this new presentation!

Several times a day, guests will enter this stadium seating area and sit down to watch the most unusual show at Walt Disney World. 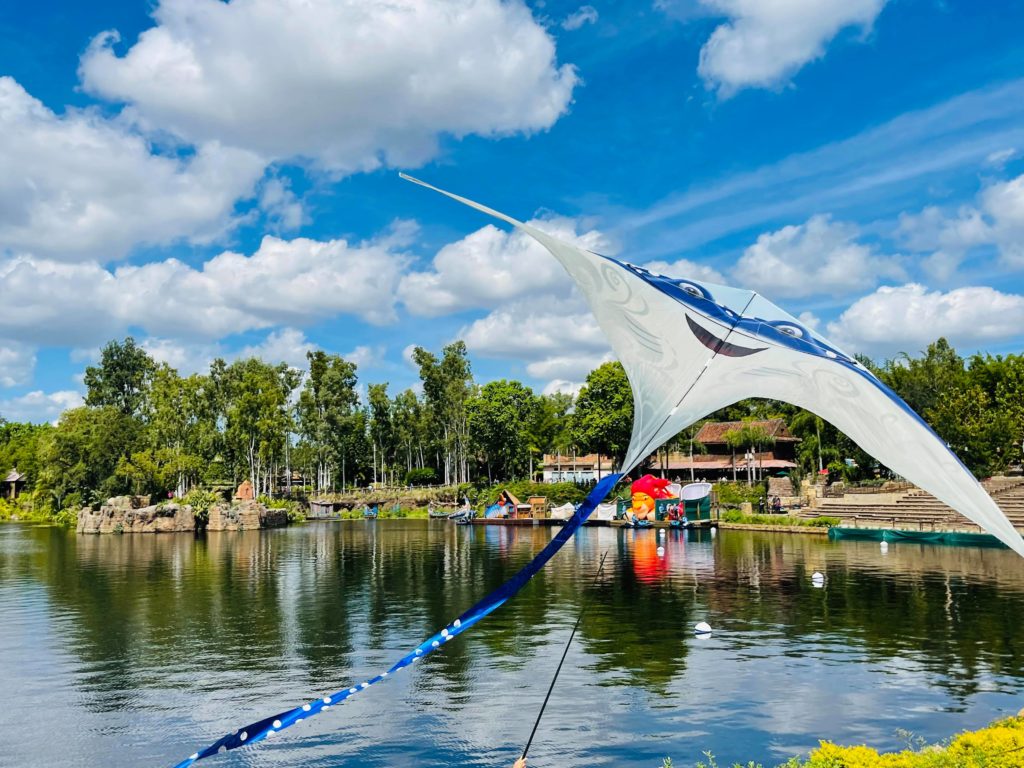 Obviously, the stars of this show are the kites, which Imagineers have made in all shapes and sizes. 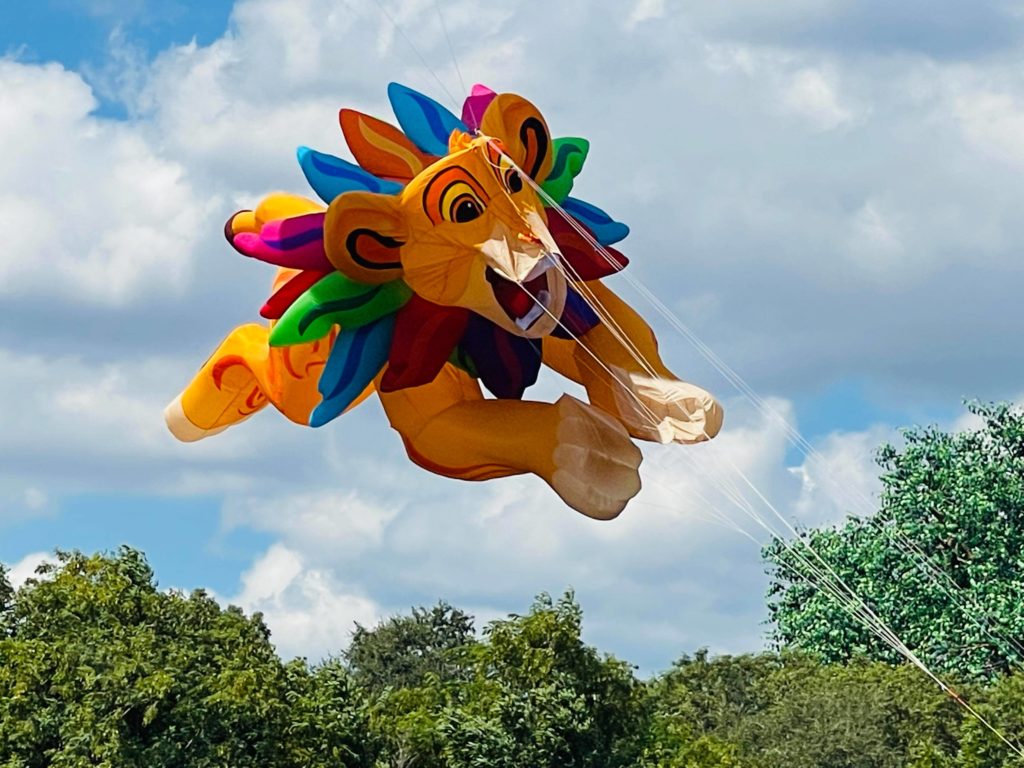 Six times a day, cast members grab their Disney KiteTails gear and put on a show with these kites and other objects.

About the Disney KiteTails Presentation 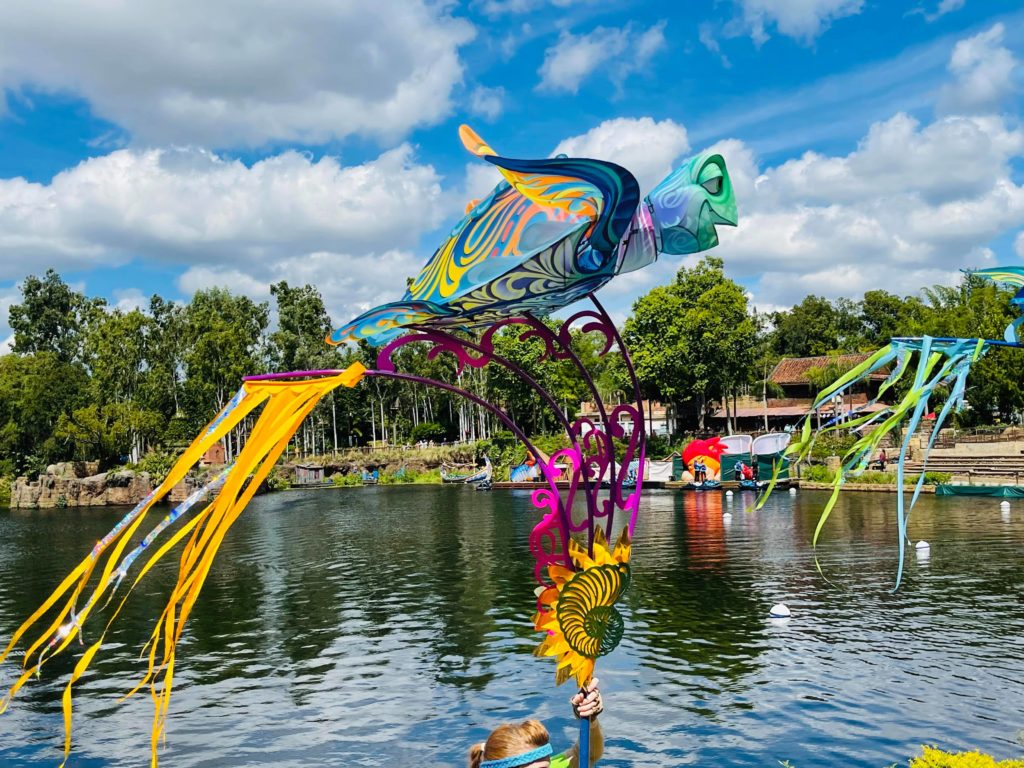 Of course, the schedule is subject to change, but you should take 20-25 minutes out of your day to catch Disney KiteTails.

When you do, you’ll enter the amphitheater and sit down to watch the pre-show. 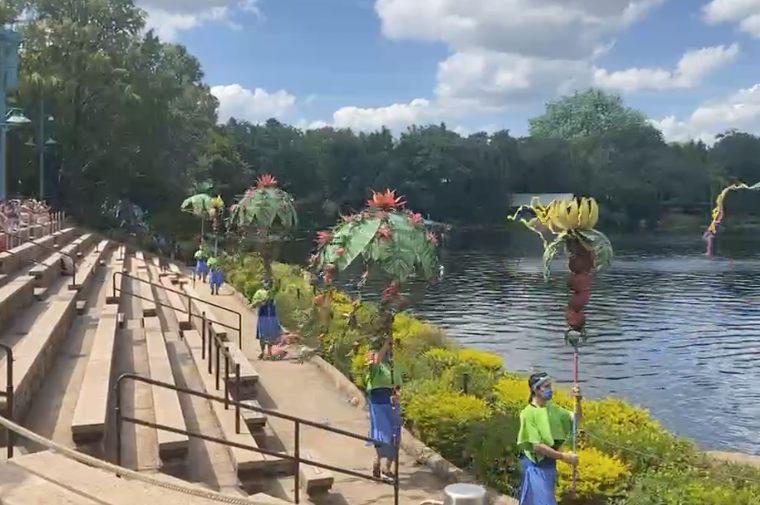 This segment involves cast members selecting guests from the audience to participate in a quick processional.

A lucky few guests will receive “kites” that they will carry above their heads as they walk through the theater’s front row. 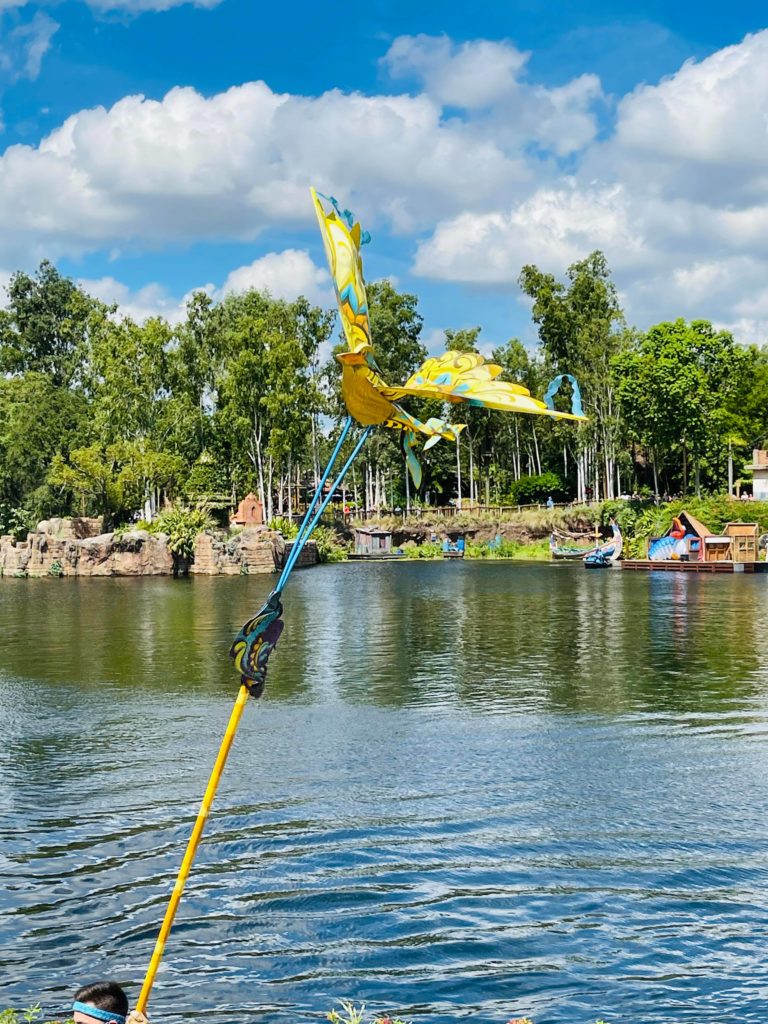 Later, cast members will do the same during the show, only they’ll carry full-sized kites and other props.

This point in the show mirrors Disney’s musicals, as the workers will sometimes act as puppeteers for the giant kites they’re carrying. 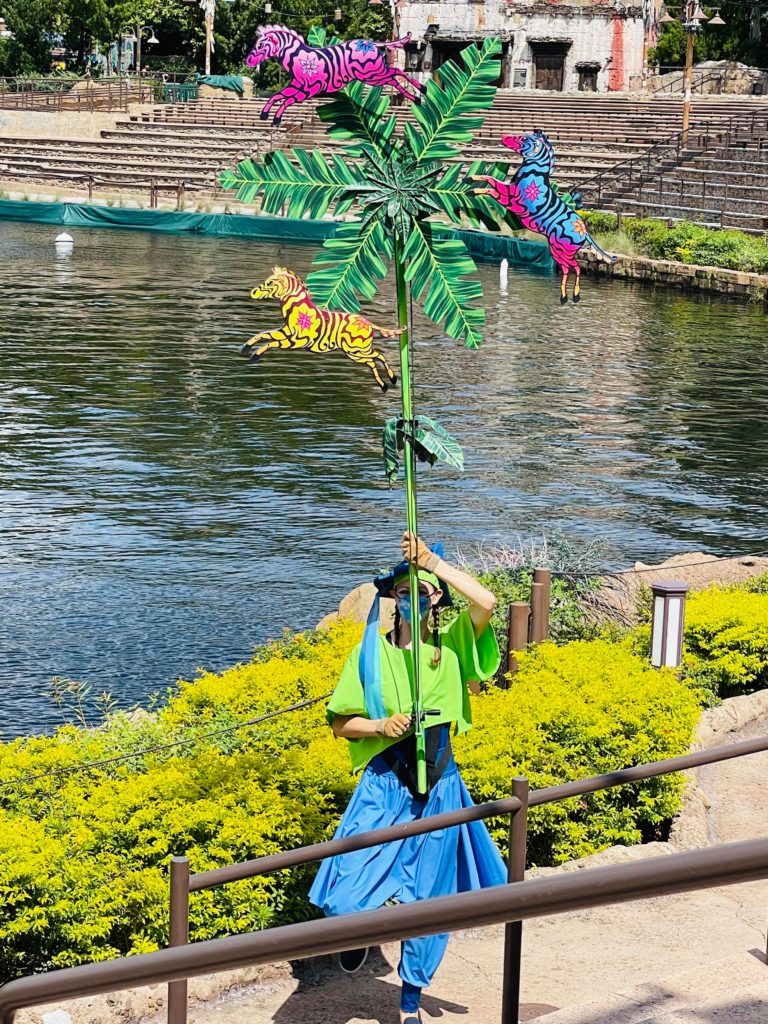 You’ll watch as someone carries Crush from Finding Nemo over their head. Then, after a time, you’ll forget a person is there because you’re focusing so much on the kite.

Disney has designed different styles for its kite show. Most of them come from Jungle Book, Finding Nemo, and The Lion King.

These kites are colorful to behold and sometimes massive in size. Here’s where the Macy’s Day parade aspect comes into play.

During one of the sneak previews, a giant Baloo from Jungle Book flew across the water.

Calling Baloo a kite feels wrong. It’s more of an inflatable hanging from an actual kite.

In fact, from some angles, you would swear that Baloo is hand gliding.

Meanwhile, other kites are multi-level, making them look like the box kites you had as a kid, only on a much grander scale. 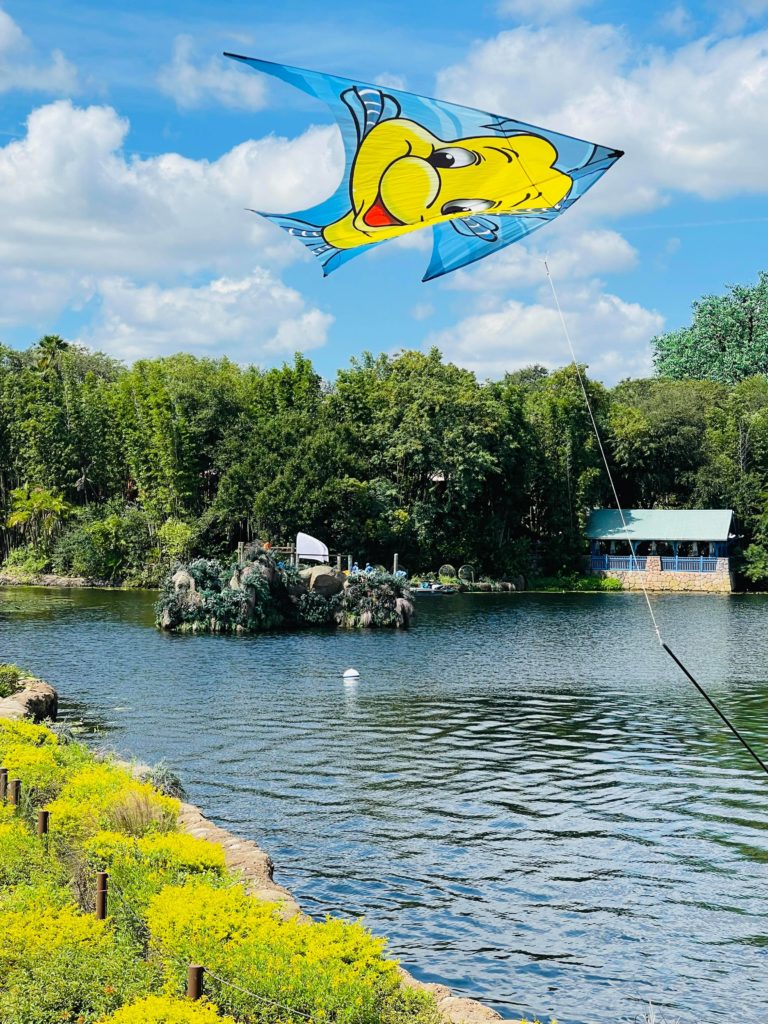 Disney sets these performances against a musical backdrop, and the kite shows apparently differ, just like Cavalcades.

I’ve already watched one that marries Jungle Book and Finding Nemo elements. But, then, there’s another that’s almost exclusively about The Lion King. 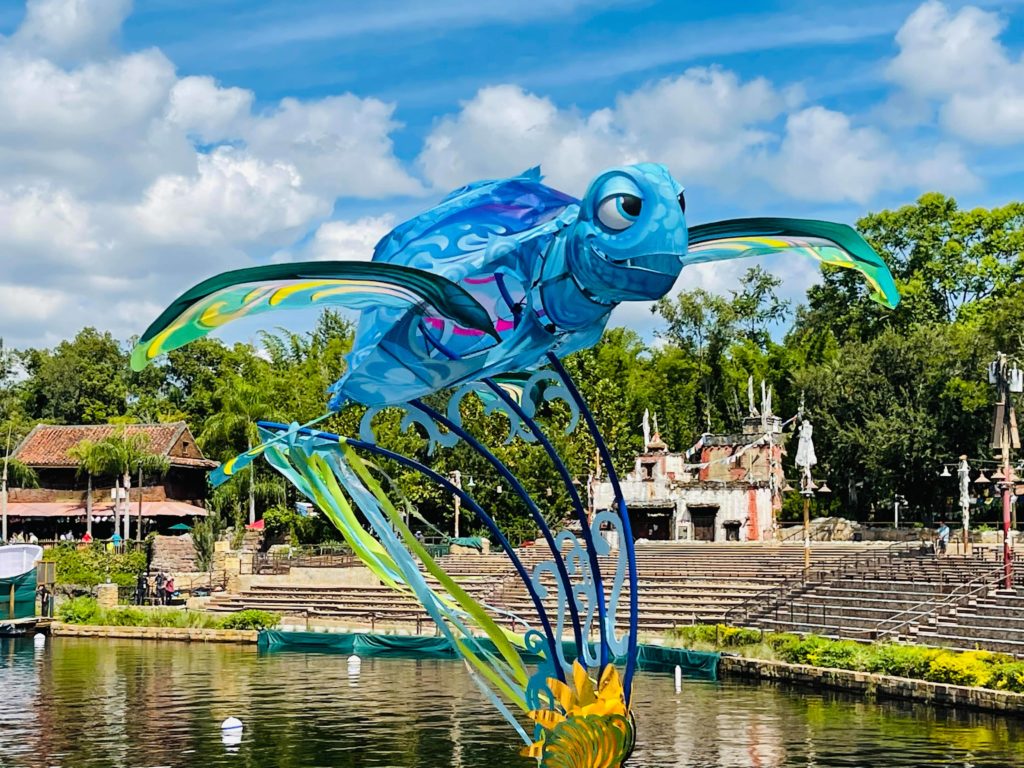 Other Stuff to Look For

Those of you who enjoy watching how things work will enjoy this presentation as well. Disney cannot hide the mechanics of this show.

As such, you’ll notice the boats on the water constantly circling Discovery River as they drive fast enough to keep the kites afloat. 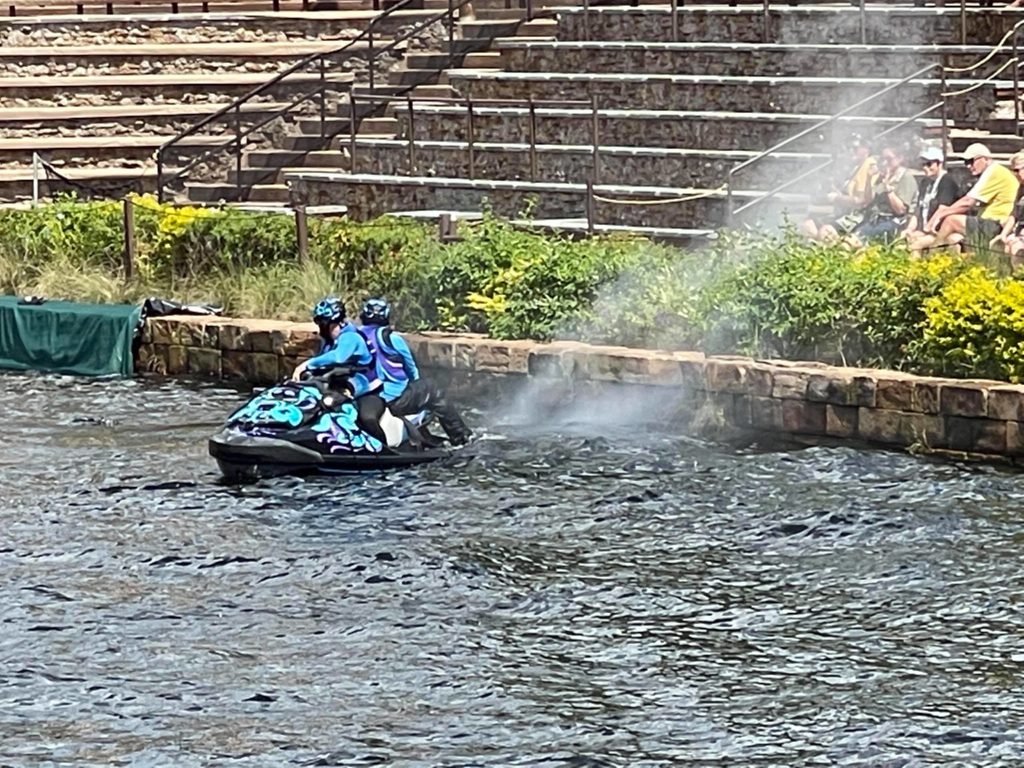 Similarly, the cast members flying kites in the amphitheater must work quite hard to keep them flying correctly. It’s a job that requires a lot of dexterity. 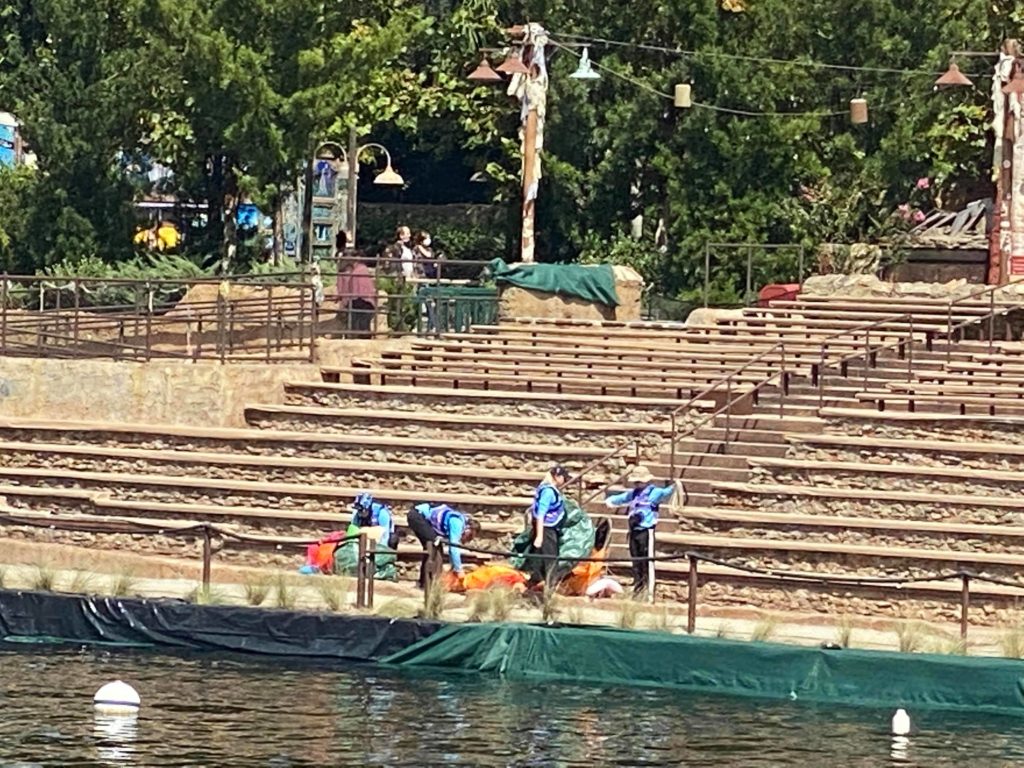 Baloo is a big boy, and he covers a lot of territory when he takes a break during the show. It’s pretty funny.

Overall, Disney KiteTails comes with smaller ambitions than Harmonious. Instead, it’s a simple distraction of a show that caters to kids…and it’s perfect for that! 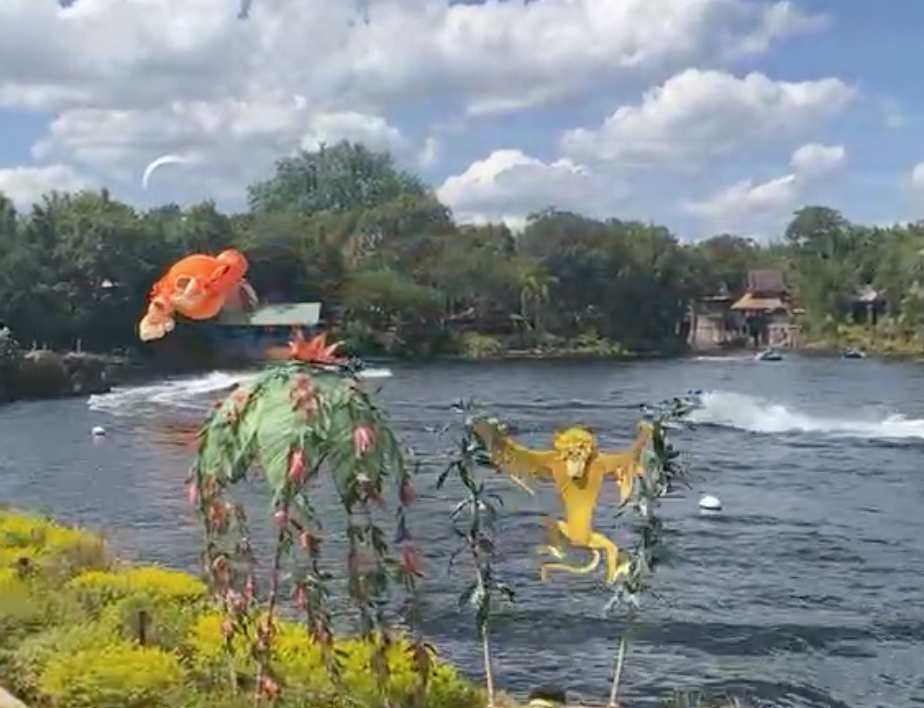 Who doesn’t love watch colorful kites and inflatable balloons fly through the air? And these flying objects are Disney-related!