We’ve got a moving story for your Saturday morning!  Disney recently gave a hero’s welcome to Gil, a Cast Member at Walt Disney World who recently returned home after a 6 month deployment to the Middle East. 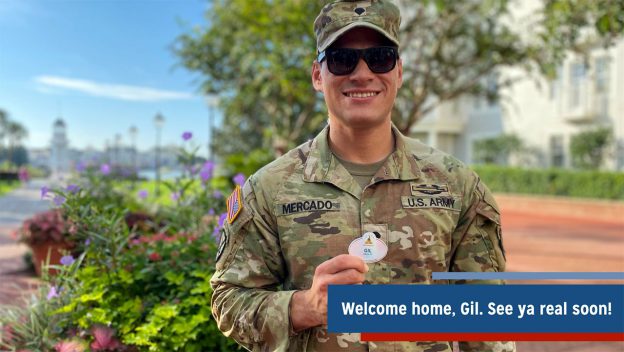 Gil Mercado, 23, is a culinary specialist at Disney’s Yacht Club.  He also just finished his second tour of duty in Afghanistan with the U.S. Army Reserves.  Gil was a member of the 4th Battalion 31 Infantry regiment.

On his first week back he visited Disney saying that he missed the magic when serving so far away from home.  When he arrived onsite at the Yacht Club he was greeted by Disney World execs and cast members.  This included members of SALUTE, a veteran’s group who officially welcomed him back!

Kim Marinaccio, General Manager at the Yacht & Beach Club had this to say about Gil’s return, “Our cast family was so happy to welcome Gil home to Walt Disney World,” She continued,  “I grew up in a military household, so being able to welcome this brave Soldier and Disney cast member home and thank him for his service was special to me. In fact, it was the highlight of my 31-year career with Disney.”

During his time away, Gil never lost sights of the values that come with being a Disney Cast Member saying, “As a cast member, we learn that our goal is to create happiness and try to make magic anywhere you are,” said Gil. “Before I deployed, I packed a roll of Mickey stickers in my bag, which I was able to share with local children as our unit traveled. Seeing the smiles on the kids’ faces was priceless.”

Now that he’s back at Disney, Gil will continue to balance both worlds as he is about to earn his sergeant’s stripes!

When asked what meal he missed the most while abroad, Gil said steaks so Disney hosted Gil and his family at Ale and Compass.  The Chef’s even surprised Gil with the largest butcher’s cut steak in their kitchen! 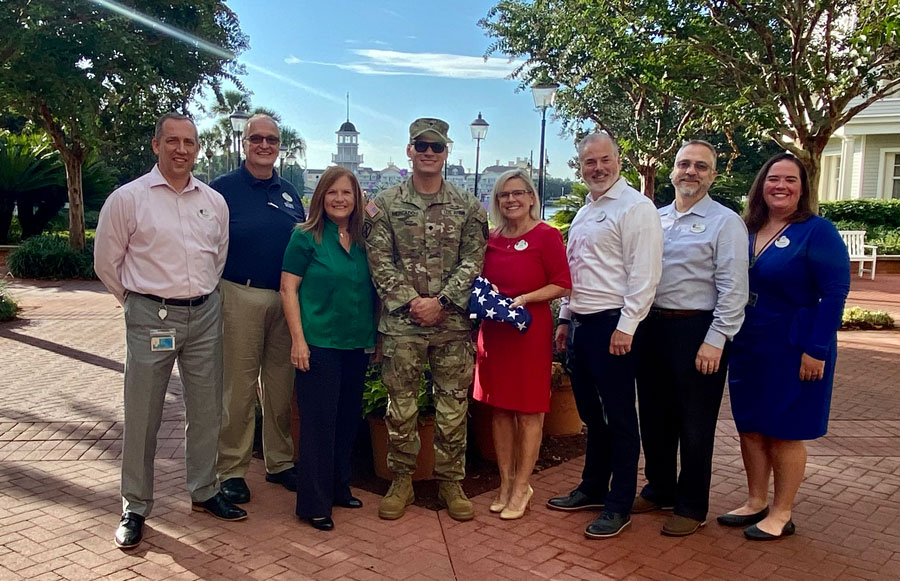 Gil will be returning to his role at the Yacht Club after the turn of the year.  He said of his visit to Disney, “I am proud to be out there serving in military uniform and appreciate Disney’s support while I’m away serving my country.” Gil continued, “It’s funny what you find yourself missing most when living in challenging conditions. I really missed walking barefoot in the grass, feeling the rain and walking around Disney parks. I’m glad to be able to do all three this week!”

We salute Gil and all of the other military personnel at Disney who are still serving in the armed forces!