In just a few short days Tenaya Stone Spa will open at Disney’s Grand Californian Hotel & Spa. This is such a magical, mystical 6,000 square-foot getaway that we wanted to share some of the awesome details with you!

Now guests to this deluxe Disneyland Resort can relax in an environment that pays homage to the tranquil beauty of the Yosemite Valley.  Natural elements play a HUGE role in the ambiance created at Tenaya Stone Spa from wooden flooring to agate and quartz crystal decor. 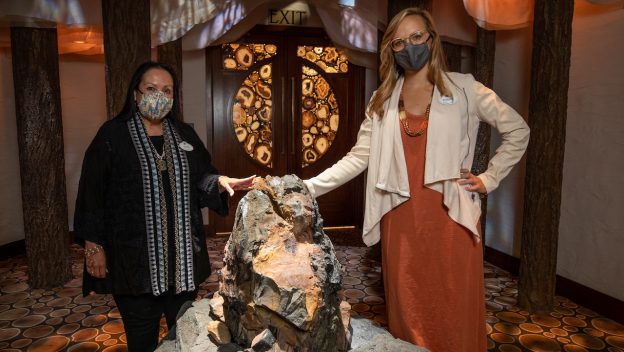 Dawn Jackson played a pivotal roll in creating the inspiring environment guests to Tenaya experience.  Jackson is a Native American cultural advisor to Disney and worked on the re-theming of Tenaya as an Imagineer in the Story Development Team.  Dawn has a rich history with Disney and back in 1993 helped develop product lines for Pocahontas referencing tribal beadwork of the Great Plains and Southwestern iconography. 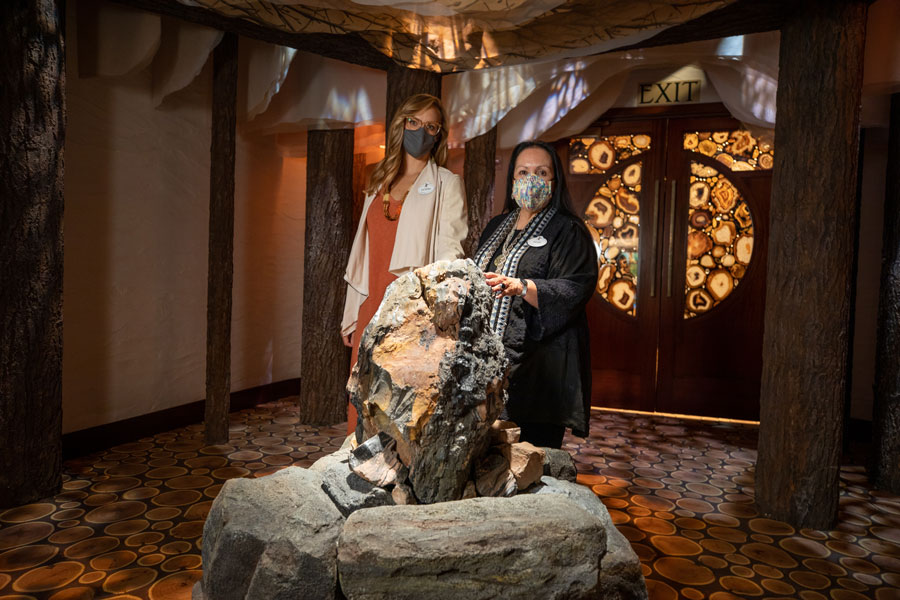 Dawn is a member of the Saginaw Chippewa Tribe which hail from Michigan and speaks Algonquin just as Pocahontas’ tribe did.  in 2018 she was contacted by Katrina Mosher an art director at Walt Disney Imagineering. Katrina and her team were working on updates to the spa at Disney’s Grand Californian Hotel & Spa. Disney wanted to incorporate a Native American-inspired storyline into the spa that guests could feel during their spa experience. 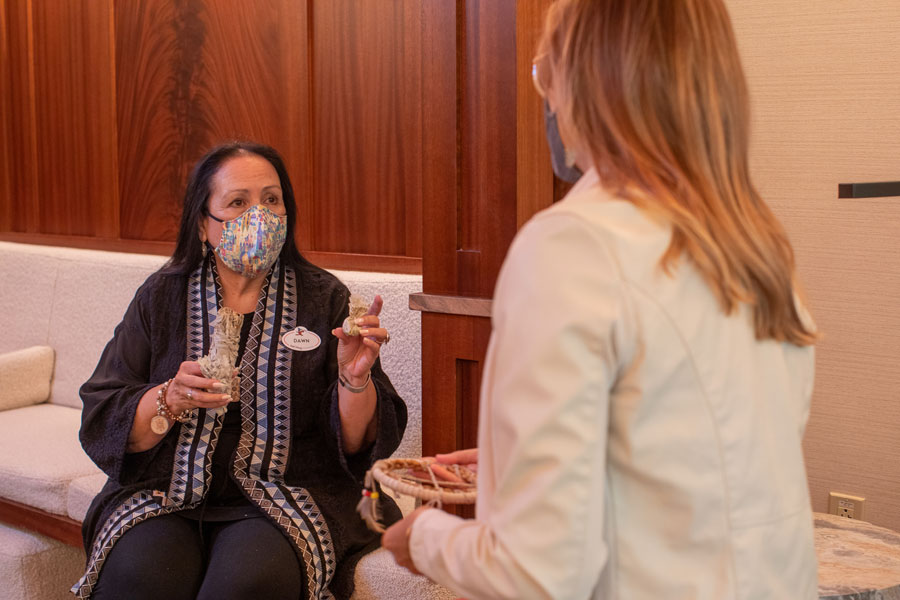 The design philosophy of of the spa was inspired by the tribal teachings of wellness and balance.  A crucial concept is the natural order of four. It represents the four elements of one’s life (social, spiritual, emotional and physical.)

At the Spa, this is represented through the interior’s four main colors (white, red, black and yellow) the four types of stones you’ll find (white magnesite, red pumice, black obsidian, gold pyrite) and the four indigenous medicinal plants used in treatments (sweet grass, sage, cedar and tobacco.  During your visit to the spa also see if you can find directional points (north, south, east and west) which also represents the order of four! 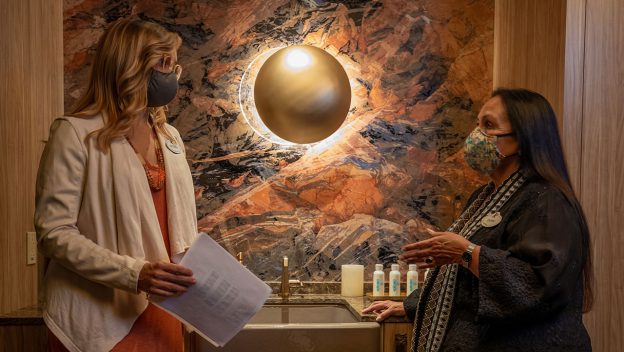 The spa’s music was recorded by a Native American singer.  It was selected to pay homage to indigenous music. 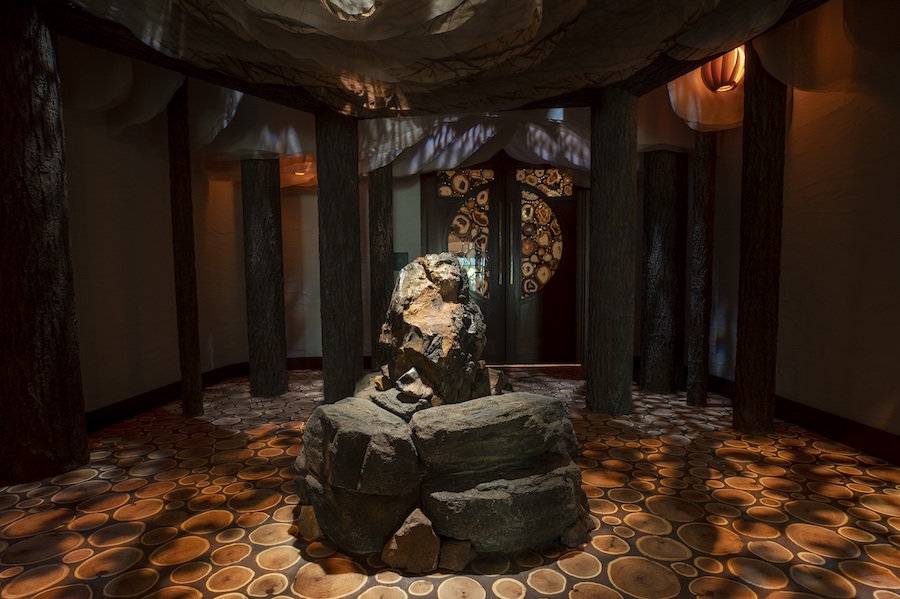 At the center of the spa is the Tenaya Stone, This was a stone gifted from the descendants of Chief Tenaya. Tenaya itself (pronounced ten-eye-uh) can be interpreted to mean ‘to dream’ in the indigenous culture of the Yosemite Valley.

Dawn said that she had to go on a journey in order to find the stone that now has pride-of-place at the hotel.  She said that eventually the stone revealed itself while she was looking for it with a Miwok elder and her family. The Miwok family blessed it an gifted it to Disney.  It now sits at the center of the spa and is a place to reflect and set intentions. 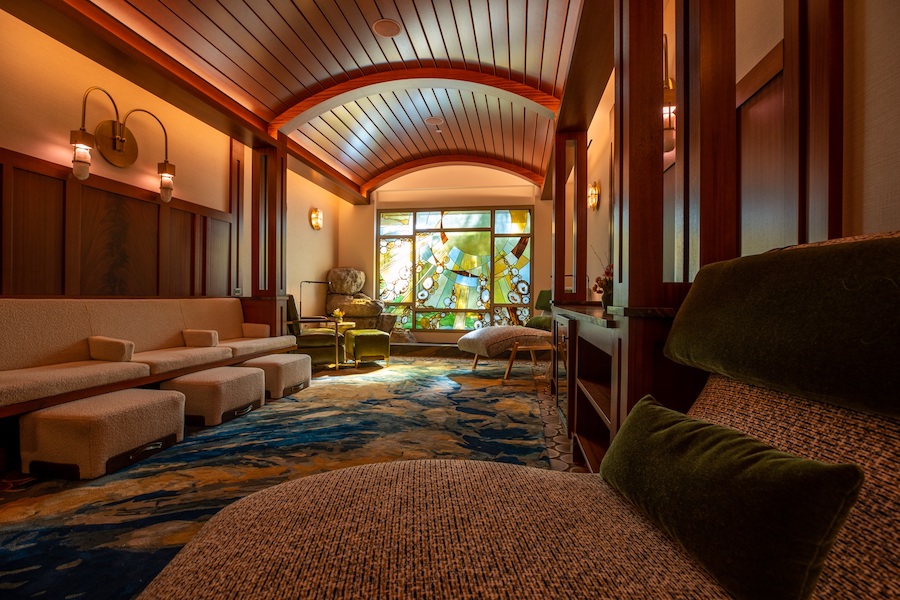 The feeling you get when you enter Tenaya is slightly different then when walking through the atrium of the Grand Californian. Katrina said that the idea with the Craftsman architecture of the hotel is to look out and up.  In the spa you look down and in, emotionally and physically grounding yourself into the earth, stones and roots. 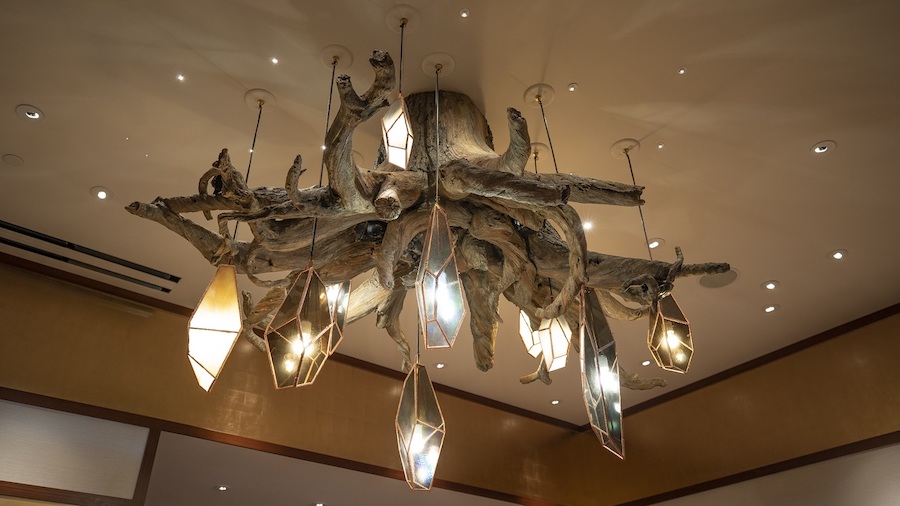 Another highlight of the spa’s décor is the chandelier.  In the chandelier the tree’s roots represent the earth element which soaks up the water.  Obsidian is featured which is black and associated with the West. The chandelier is also made from exposed redwood tree roots. 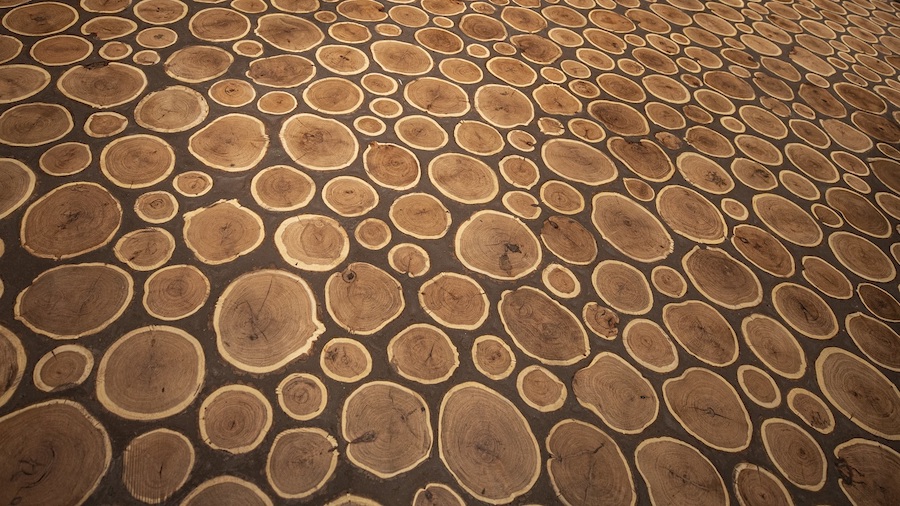 One of the highlights of a visit to Tenaya is stopping by the relaxation lounge.  It’s on the east side of the building where the sun rises.  It features a stained glassed window with rich yellow hues to represent the sun’s rays coming into the room. Sliced agate stone was used to get this effect.

The water feature in the corner has a vein of gold running through the rock. The carpet is also inspired by Tenaya Lake where the stone was found. 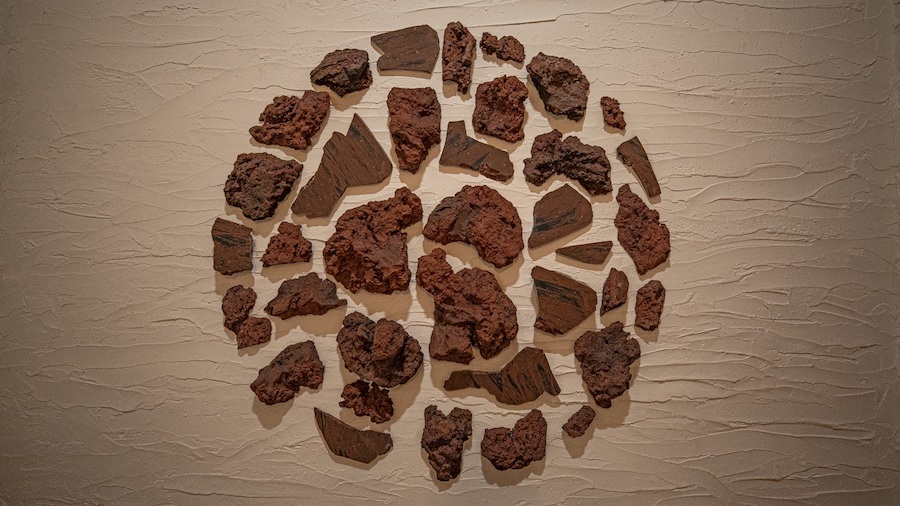 On the south side of the room there is an art piece that represents the color red and the air element.  The piece is made out of red pumice and red obsidian. 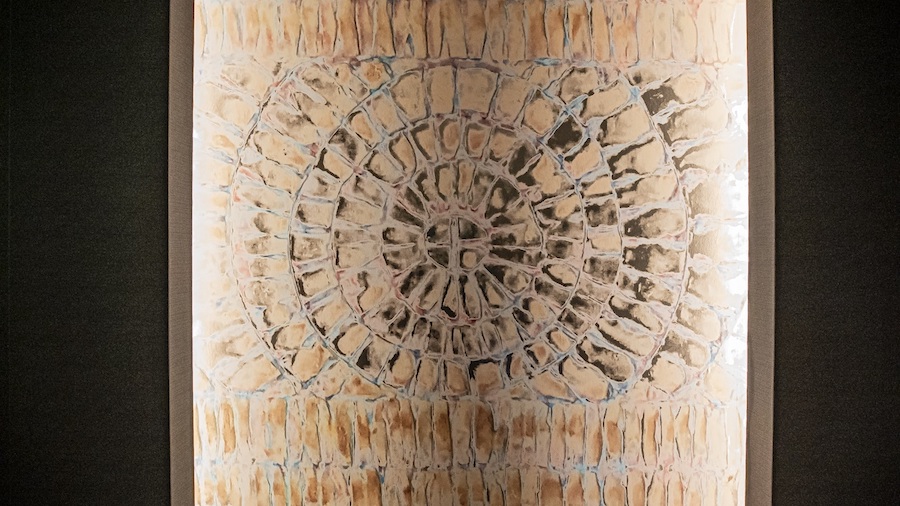 On the north side of the spa there is artwork made from white magnesite which was sourced from a place called Chalk Mountain. This stone was actually once used a currency by the tribes in California.

Also on the north side is a mural by a Native American artist that represents the color white and earth element.

To explore Tenaya a bit further, check out the video below:

As you can see form the awesome video above, Tenaya Stone Spa features 8 treatment rooms, two of these can be used for couples massage. There are also manicure and pedicure chairs, a relaxation lounge, changing rooms and a retail boutique.

Appointments are NOW available for booking. We recommend that you check out  Disneyland.com/TenayaStoneSpa. Tenaya Stone Spa officially opens in just a few short days (September 16, 2021!)

Have you heard the news!? Disneyland packages are currently available through 2022!  Book your getaway with ME before the end of September 2021 and I’ll throw in a Disney Gift Card!* Plus 1 lucky family will be picked each month to receive a special in-room delivery from Disney Floral & Gifts!  Simply fill out my form below to get your FREE, no obligation quote!