Chef Remy the “Little Chef” from Ratatouille is the inspiration for a new mini-land in EPCOT!  On October 1, 2021 the theme park will officially open a brand new expansion to the France Pavilion which will include Remy’s Ratatouille Adventure, La Crêperie de Paris and so much more! 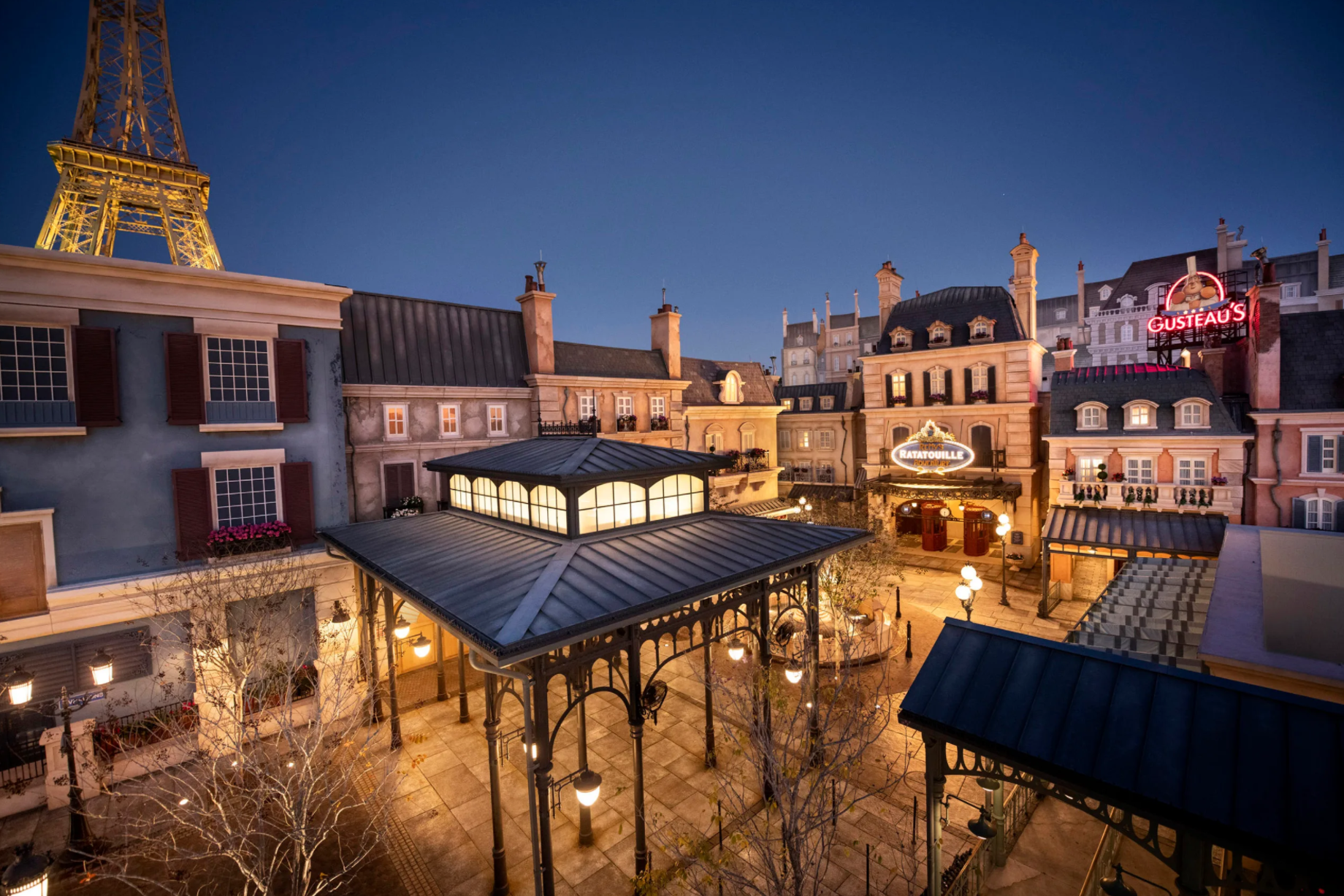 This delightful new area of the World Showcase will be one of the highlights of “The World’s Most Magical Celebration” an 18 month event beginning October 1st to celebrate 50 magical years of Walt Disney World resort.  It’s also a milestone in the multi-year transformation of EPCOT ushering in a new generation of immersive storytelling at the park. 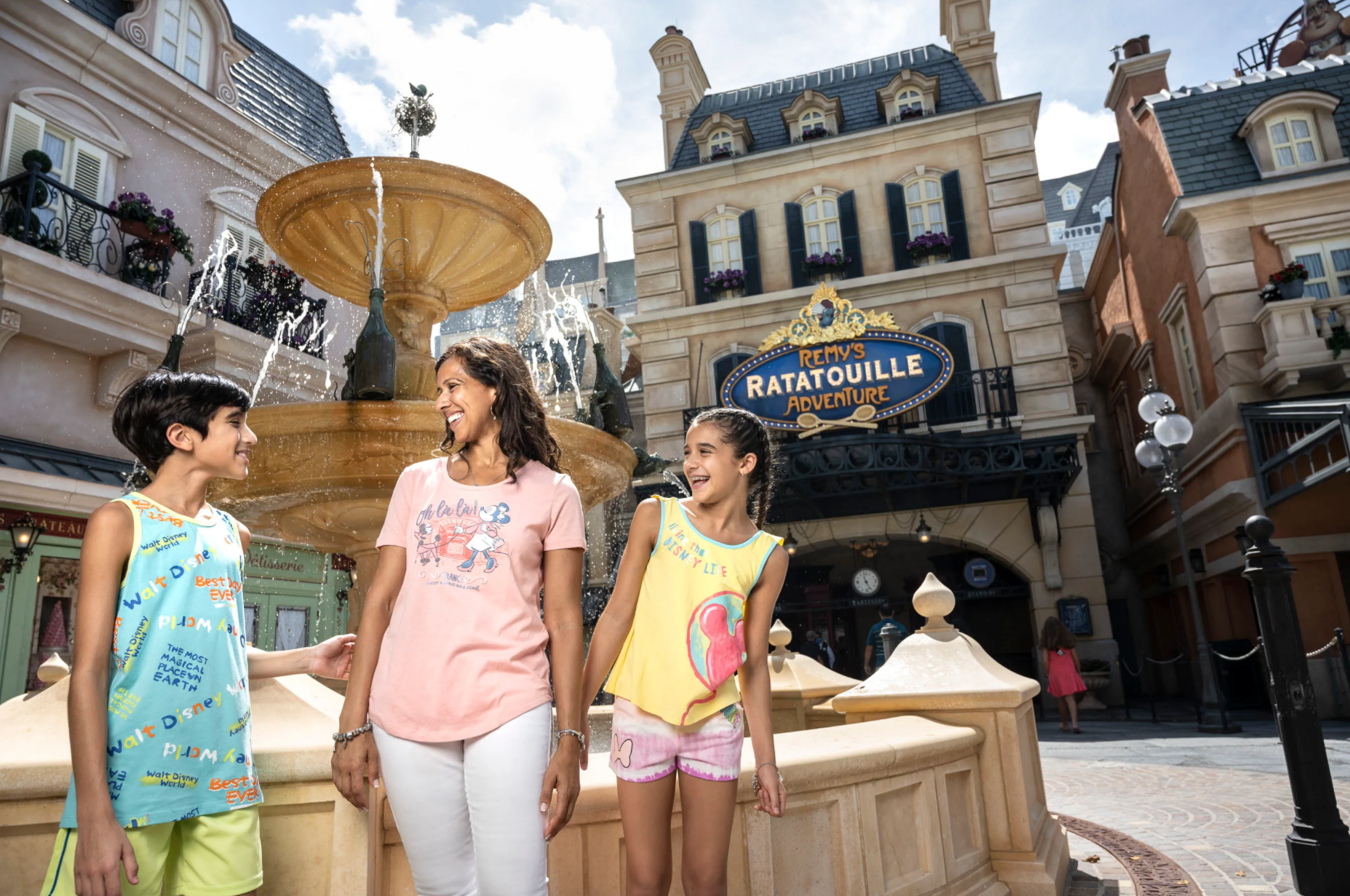 The new France pavilion expansion more than doubles the size of the existing pavilion. Imagineers have created a seamless transition between the original and new sections of the Pavilion. 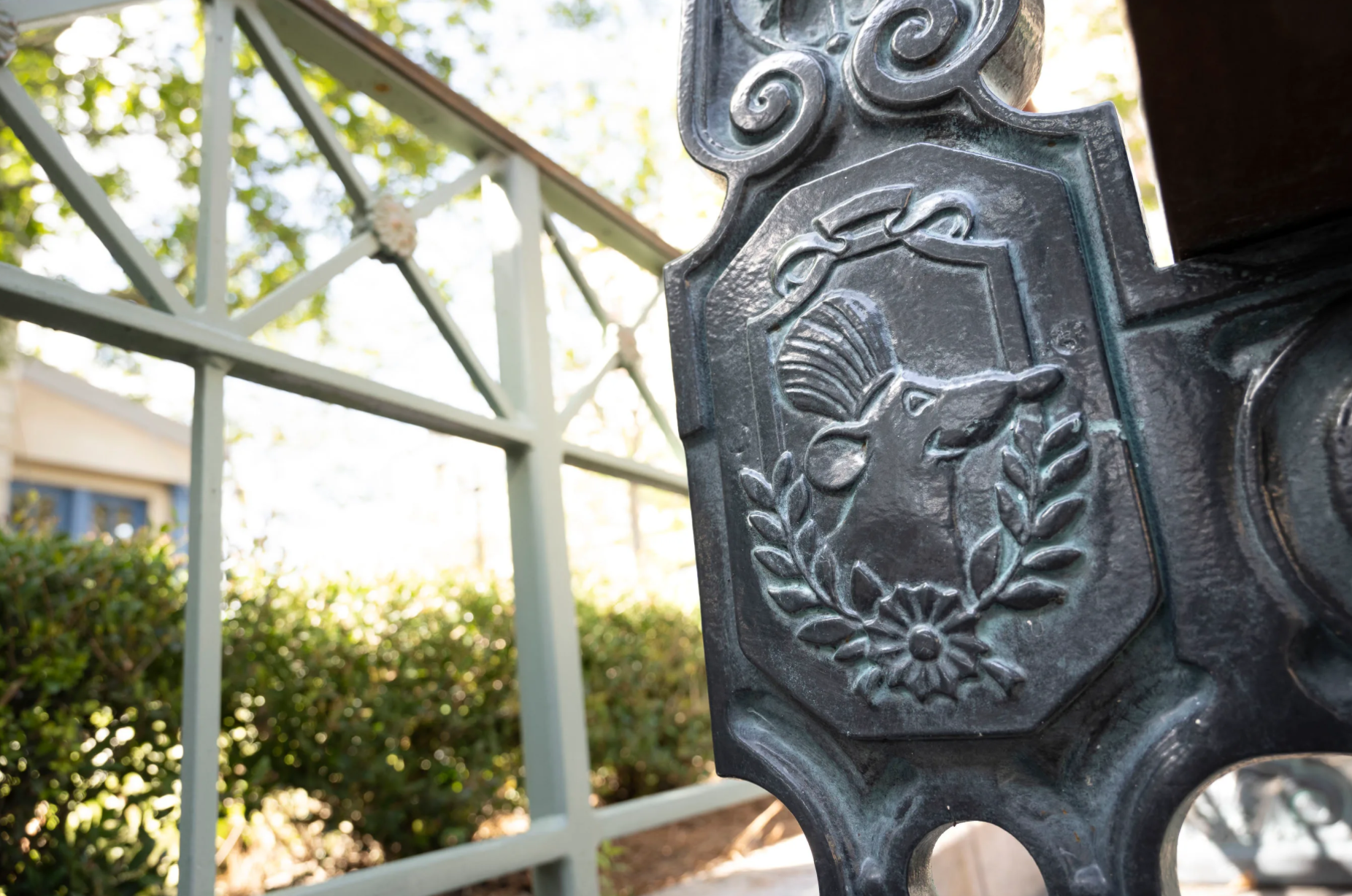 You’ll begin your journey to this newly expanded area of EPCOT with a stroll down a waterside pathway near the International Gateway before walking under an art nouveau-style archway reminiscent of the Paris Metro station before rounding a corner and entering a French market street called Alleé des Marchands (“Alley of the Merchants”). 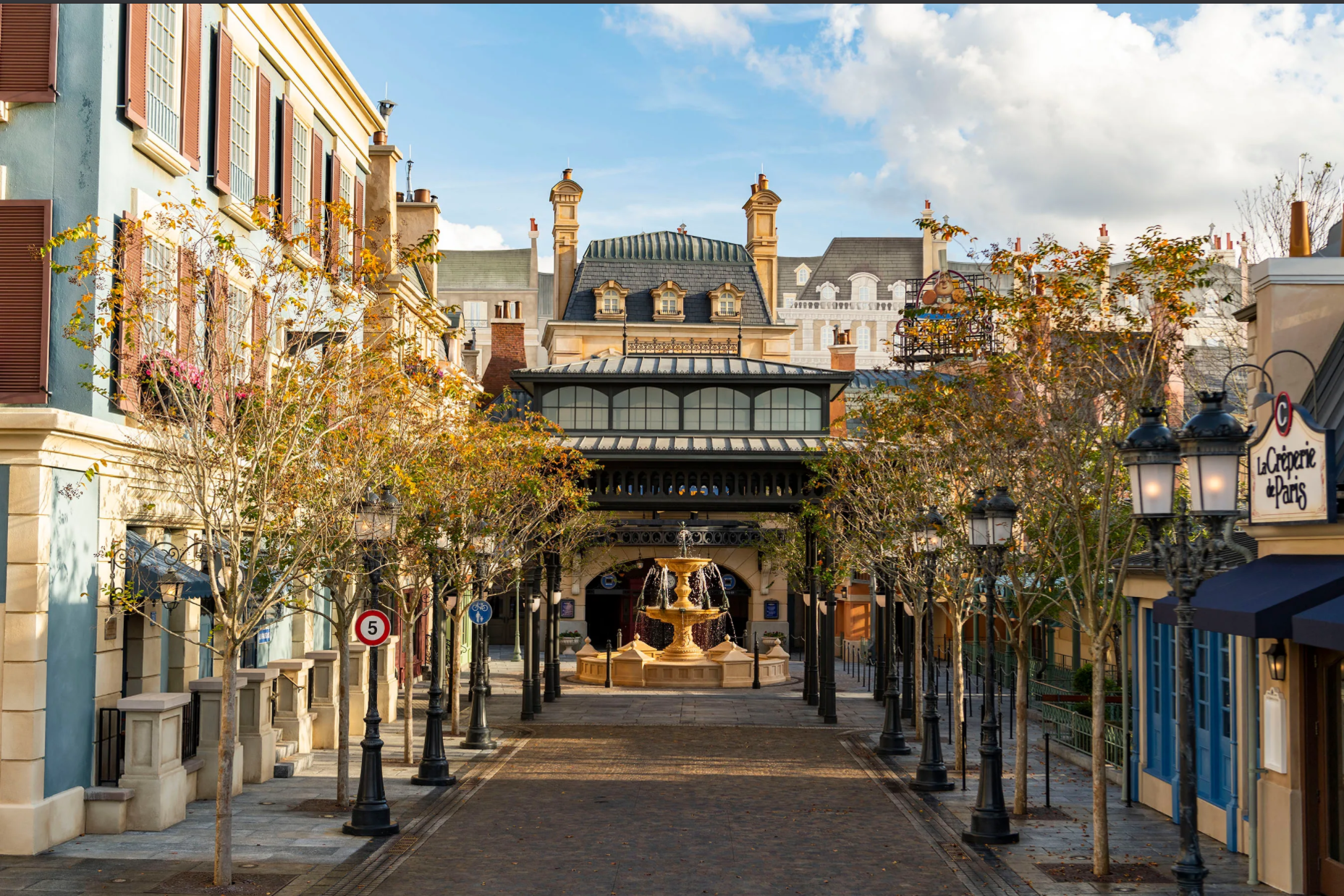 Guests will walk past La Crêperie de Paris before walking under an ornate, cast-iron arcade that serves as the transition from real-world France to the fantastical world of Remy’s Paris.

Imagineers even came up with a special term crookedology to describe they way the interpretation of the “City of Light” was recreated from the beloved Pixar film. Imagineers even worked with Pixar to design buildings in the pavilion that evoke the whimsical architectural style that fans fell in love with in the film.  Look carefully and you’ll notice lines become less straight, colors are bolder and other exaggerated touches. 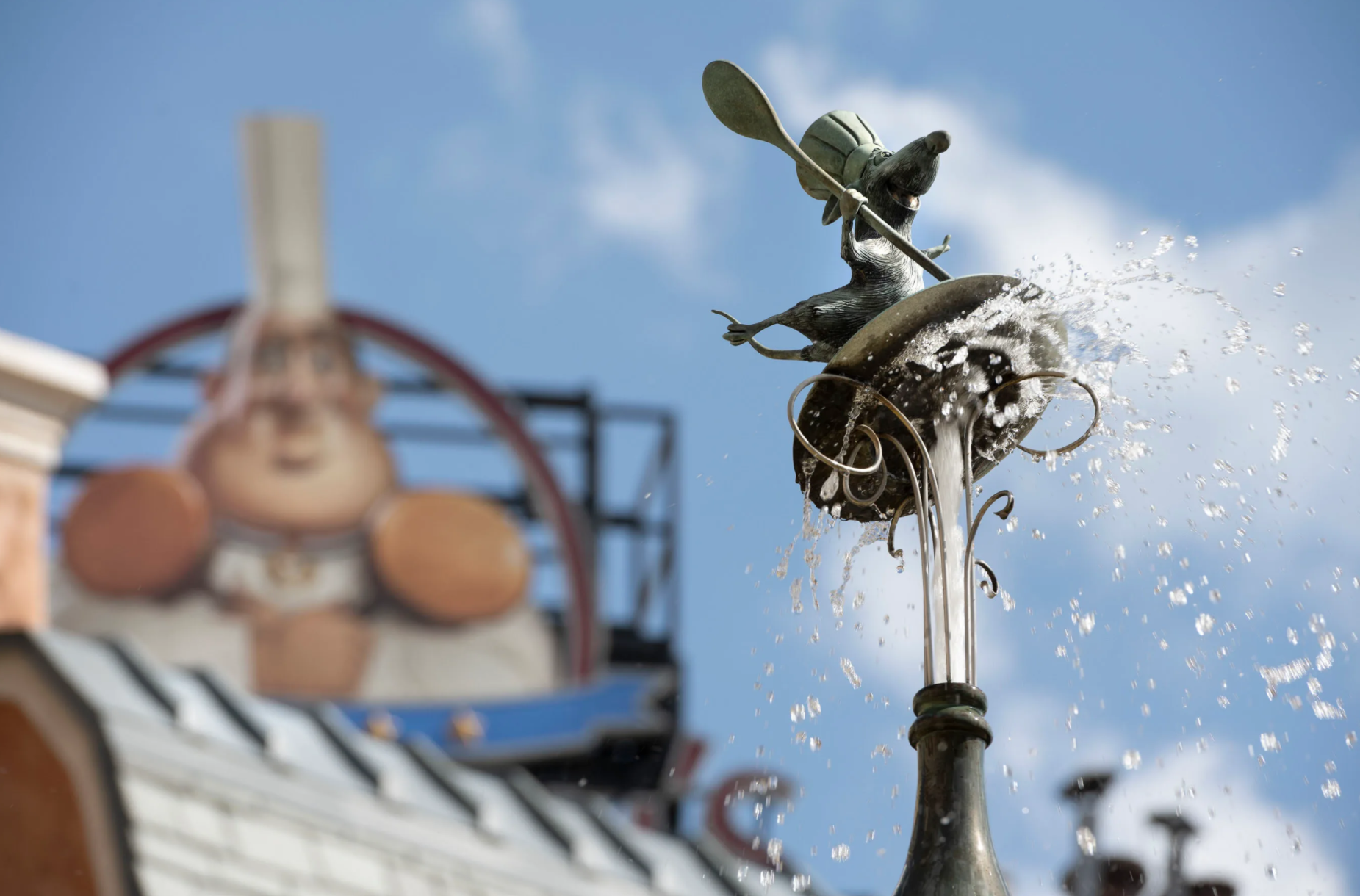 Nowhere is the theme more evidenced than with the Ratatouille fountain which has pride of place in the center of the pavilion.  This beauty is a three basin structure that features rats holding champagne bottles and flutes as water shoots out of the bottles toward the top basin.  Look closely and you’ll even see Remy standing proud at the top of the fountain wearing his chef’s hat and holding a cooking spoon 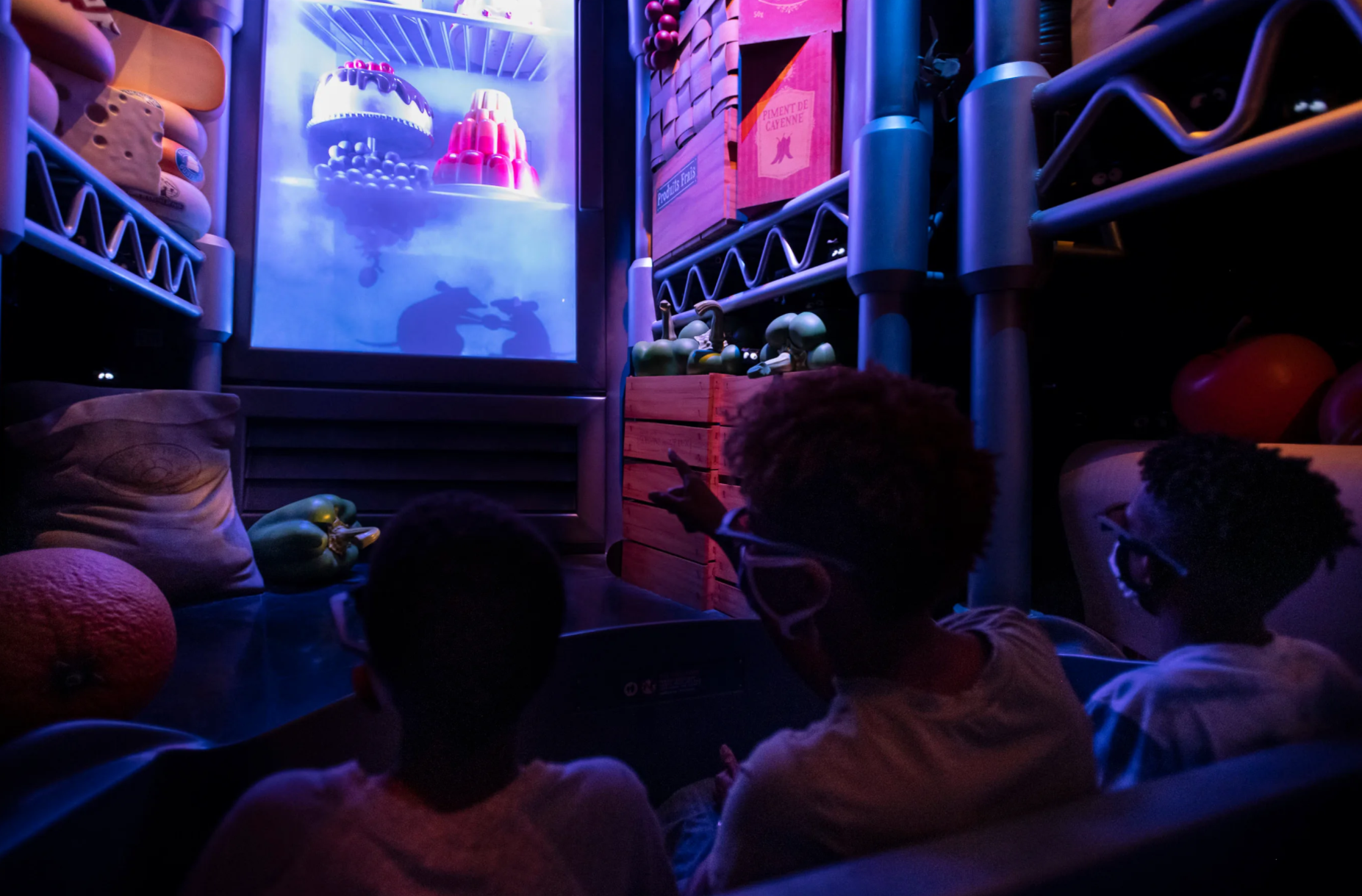 Now for the main attraction! Remy’s Ratatouille adventure is fun for the whole family.  Guests will feel like you’ve been shrunken down to the size of a rat as you race through Gusteau’s restaurant as Remy creates a culinary masterpiece. 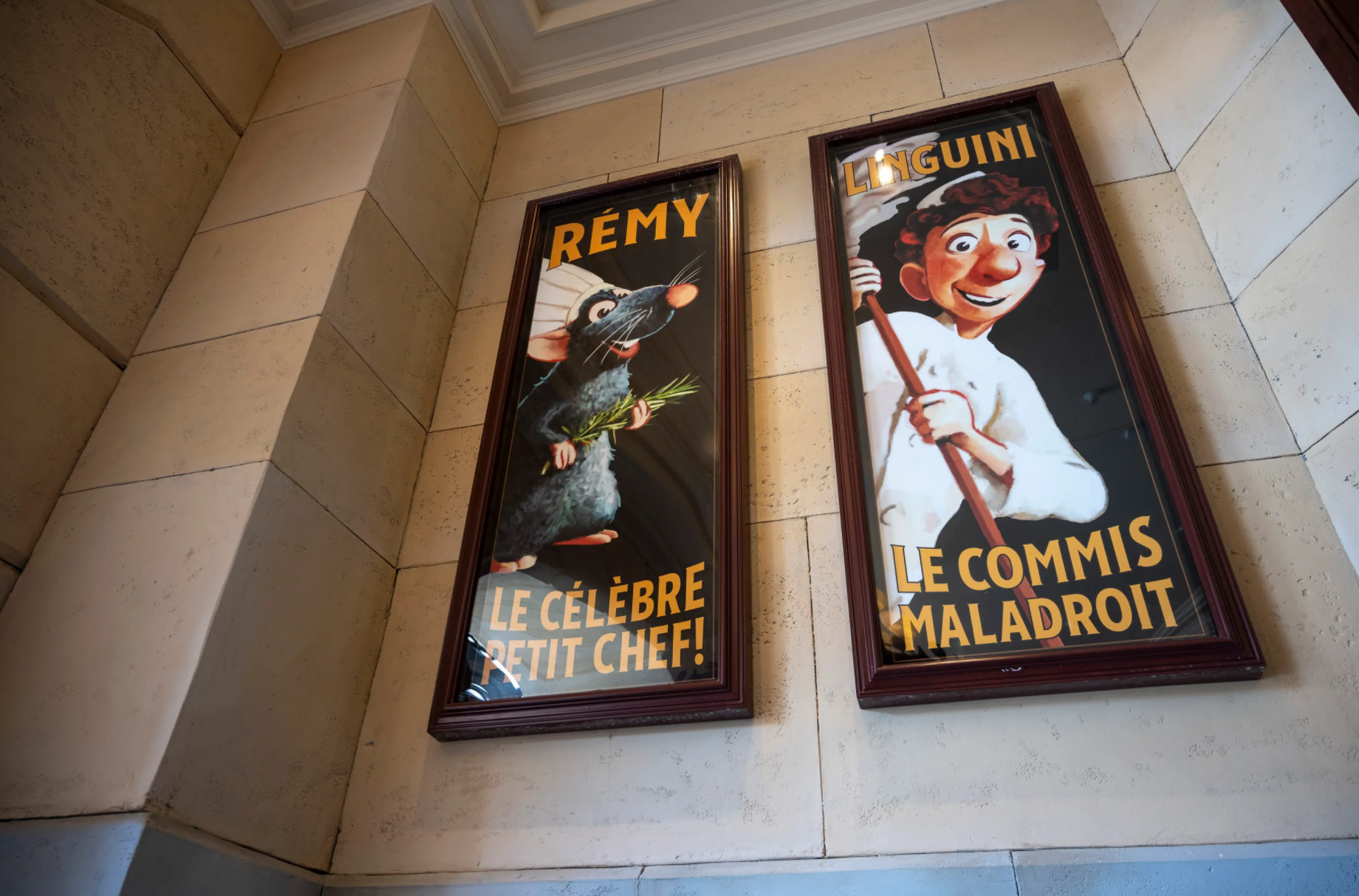 The attraction entrance which is located at the end of the pavilion’s new plaza looks like Parisian theater and features a classic marquee with hand-laid golf leaf and nearly 200 lights.

After entering the theater guests will find yourselves on the rooftops of Paris, you board colorful rat-shaped vehicles and grab 3D glasses to begin your adventure. 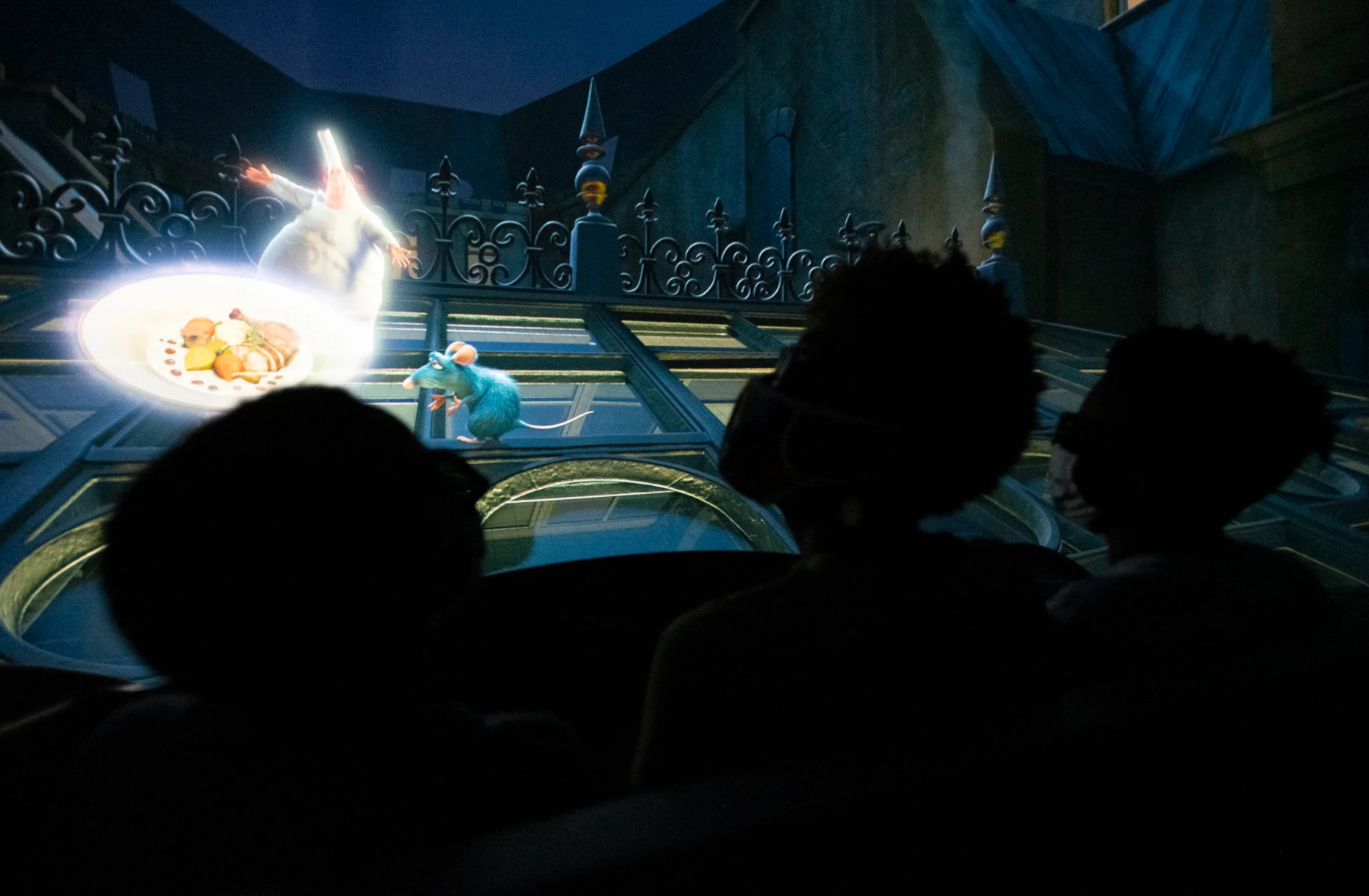 You’ll see everything from a rat’s-eye view Imagineers worked with Pixar artists to create animated 3D scenes as the film comes to life around you. The attraction seamlessly blends oversized sets to provide an immersive environment full of sights, sounds, smells and other effects paying homage to the film. 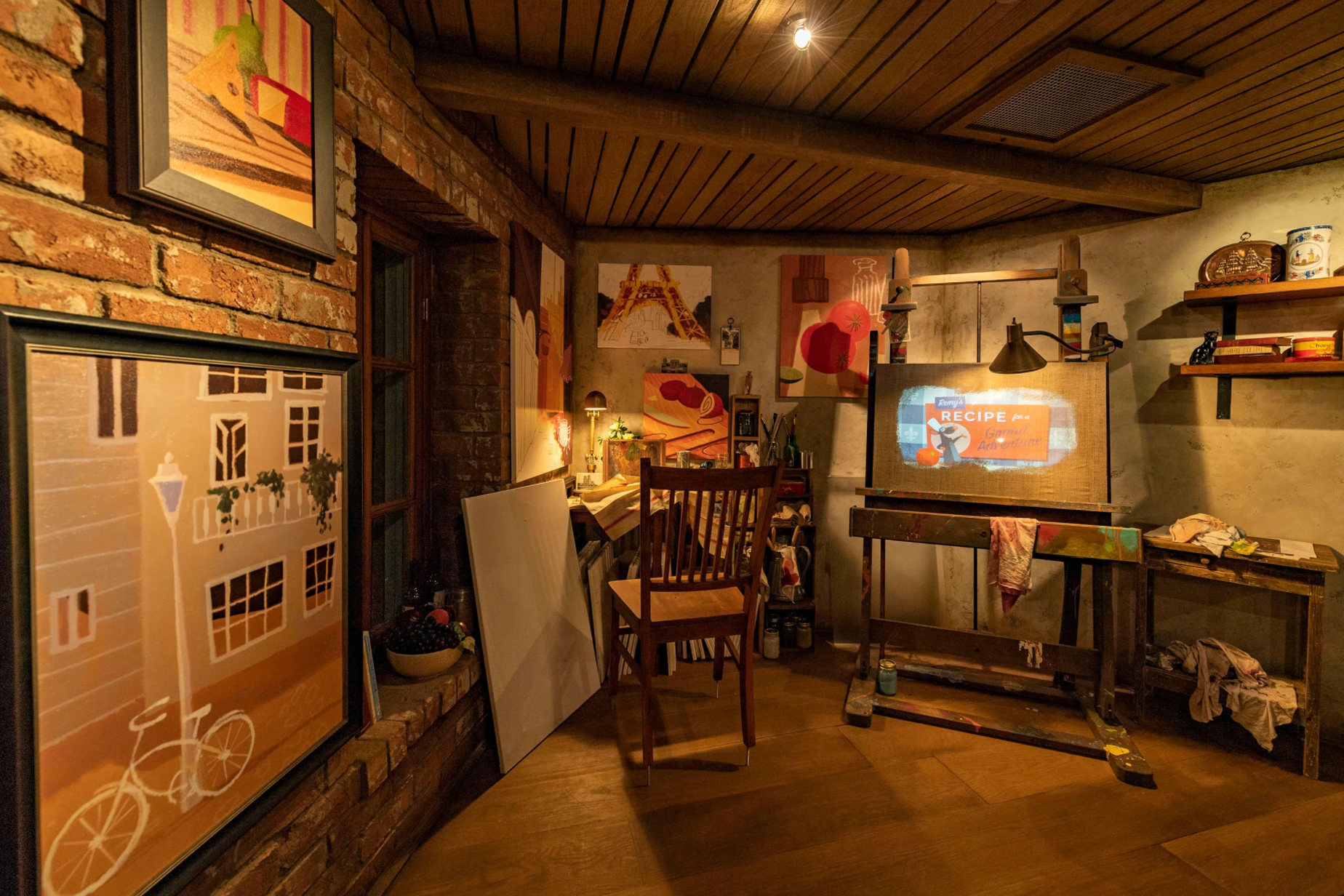 You’ll fall through a skylight, scurry through Gusteau’s kitchen, hide out in the pantry, dodge a mop, avoid being trampled by giant feet and scurry past massive pieces of food right their along your favorite rat Chef Remy.

The trackless vehicles travel in groups of three and move forward, backwards, tilt, spin and bounce through the incredible scenes described above. Best of all, each of the three vehicles take a slightly different path through the attraction meaning that you’ll notice new details if riding more than once!

And for those wondering, characters speak in a blend of English and French, adding to the overall authenticity. 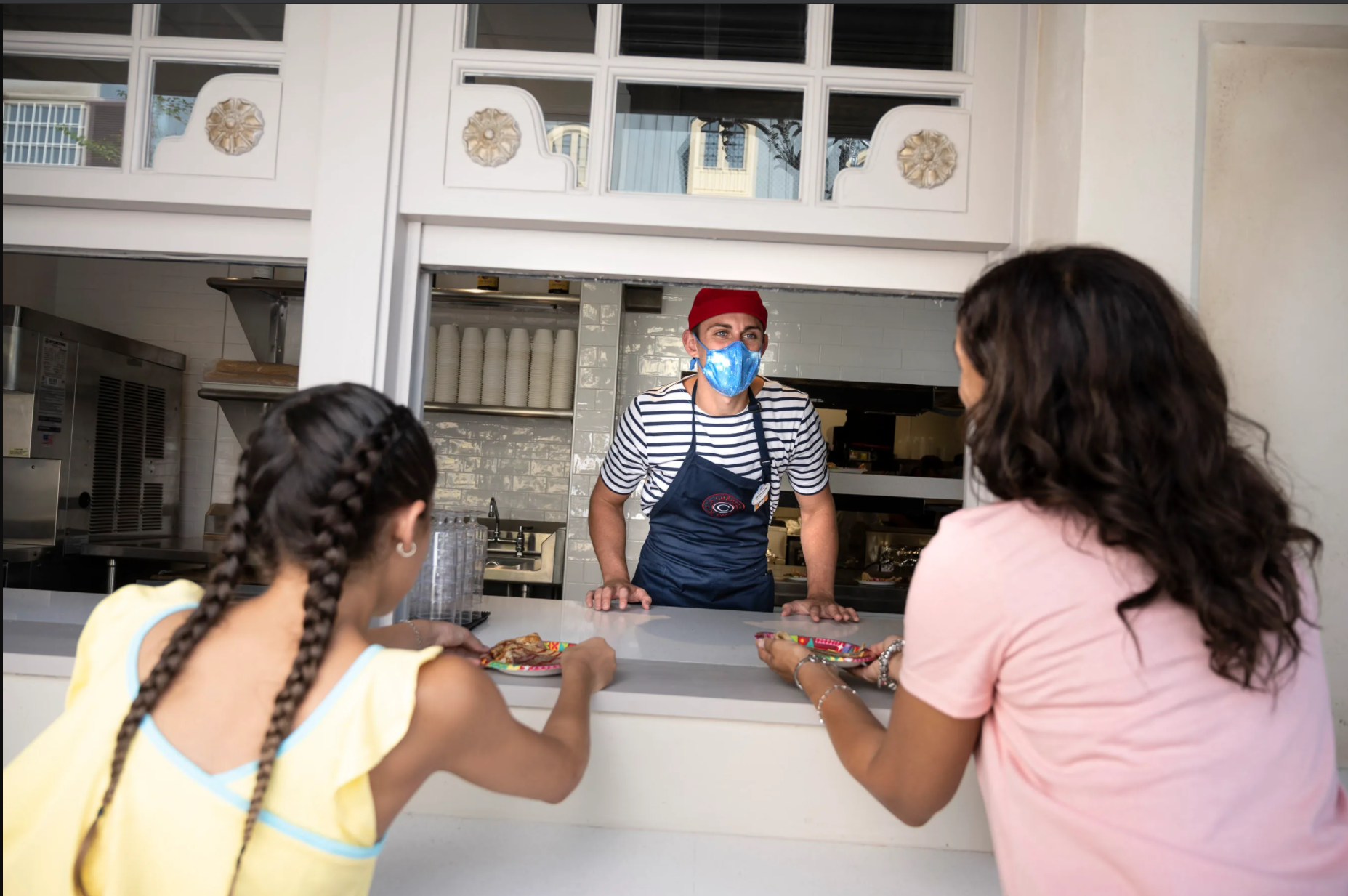 If you’ll be heading to EPCOT to check out the France pavilion expansion, be sure to bring your appetites! La Crêperie de Paris, a traditional creperie with a menu from renowned chef Jérôme Bocuse and inspired by the Brittany region of France will also open on October 1st.

On the menu will be a delectable array of savory galettes and sweet dessert crepes.  You can also sample some of Brittany’s famous hard ciders! 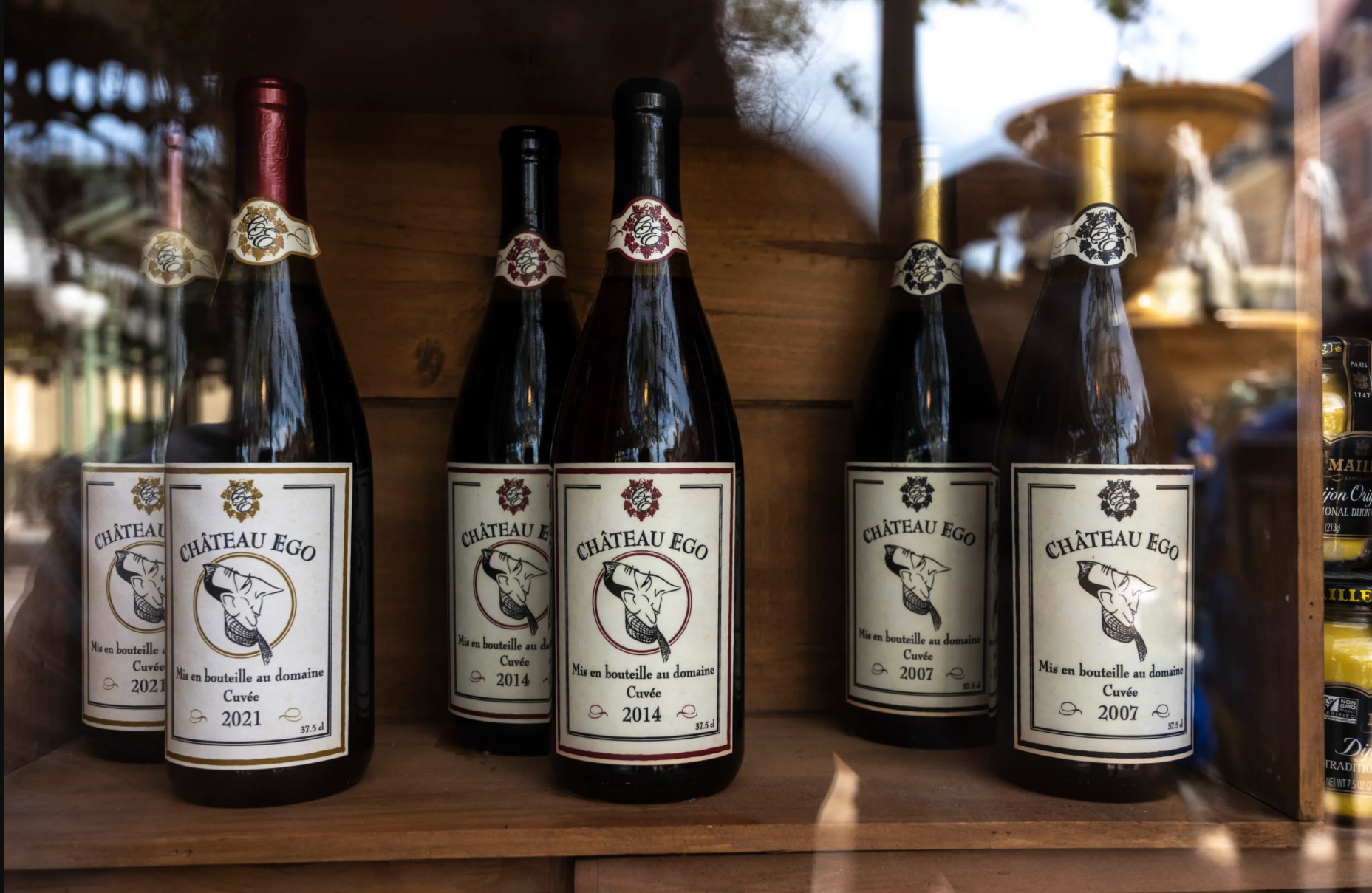 In the Brittany style, La Crêperie de Paris offers thin galettes cooked at a high temperature to allow the outside to crisp while warming the various fillings.

These treats are gluten free and come with classic fillings with twist. A great example is the Classique which is filled with ham, eggs and Swiss cheese.  There’s also The Ratatouille with tomato, zucchini and eggplant. 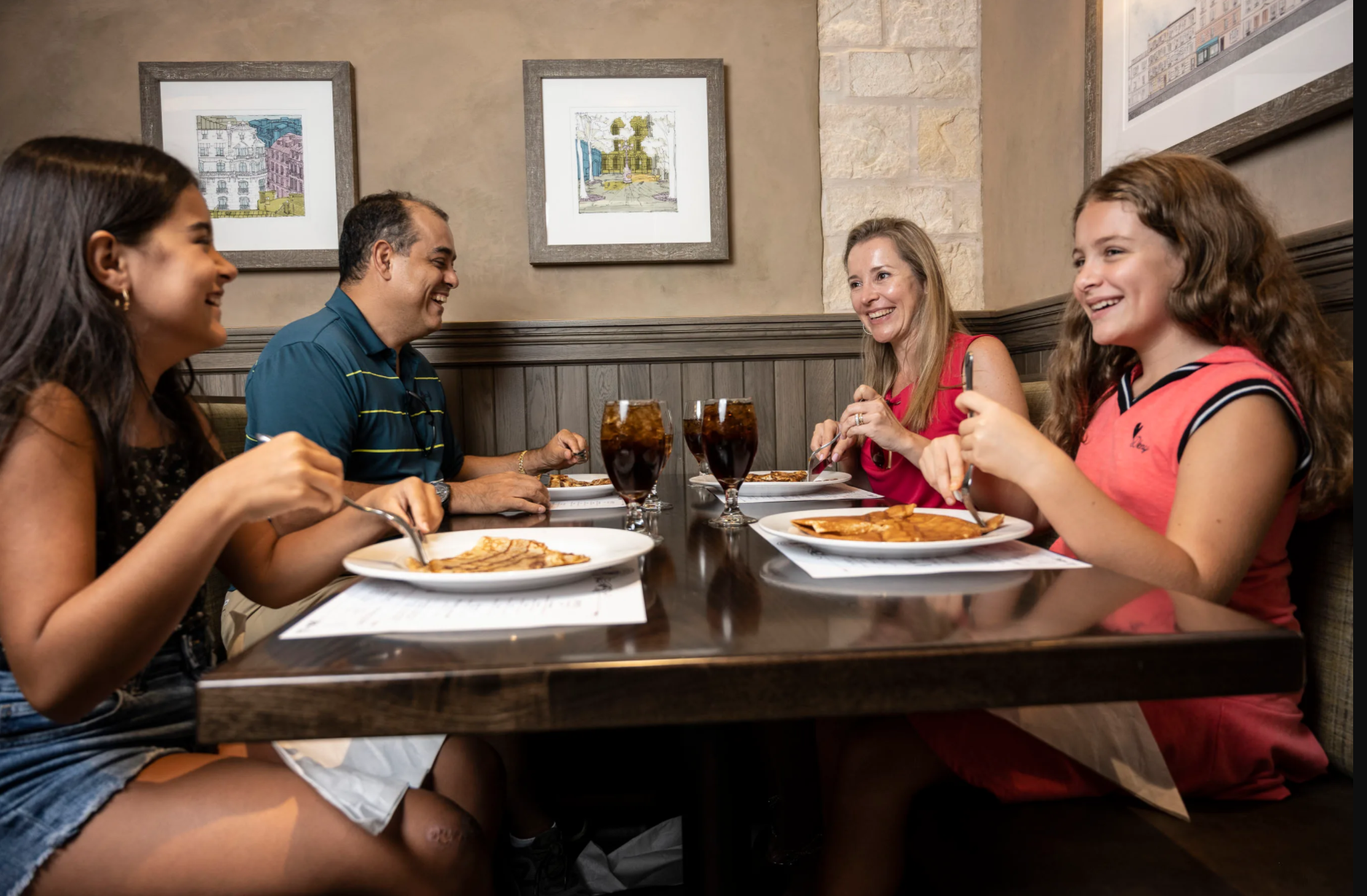 The sweet crepes are sure to be a family favorite and are made from scratch. The traditional Gourmande is filled with house-made hazelnut chocolate spread. Then there’s the Pomme, which is filled with caramelized apples and caramel beurre salé. 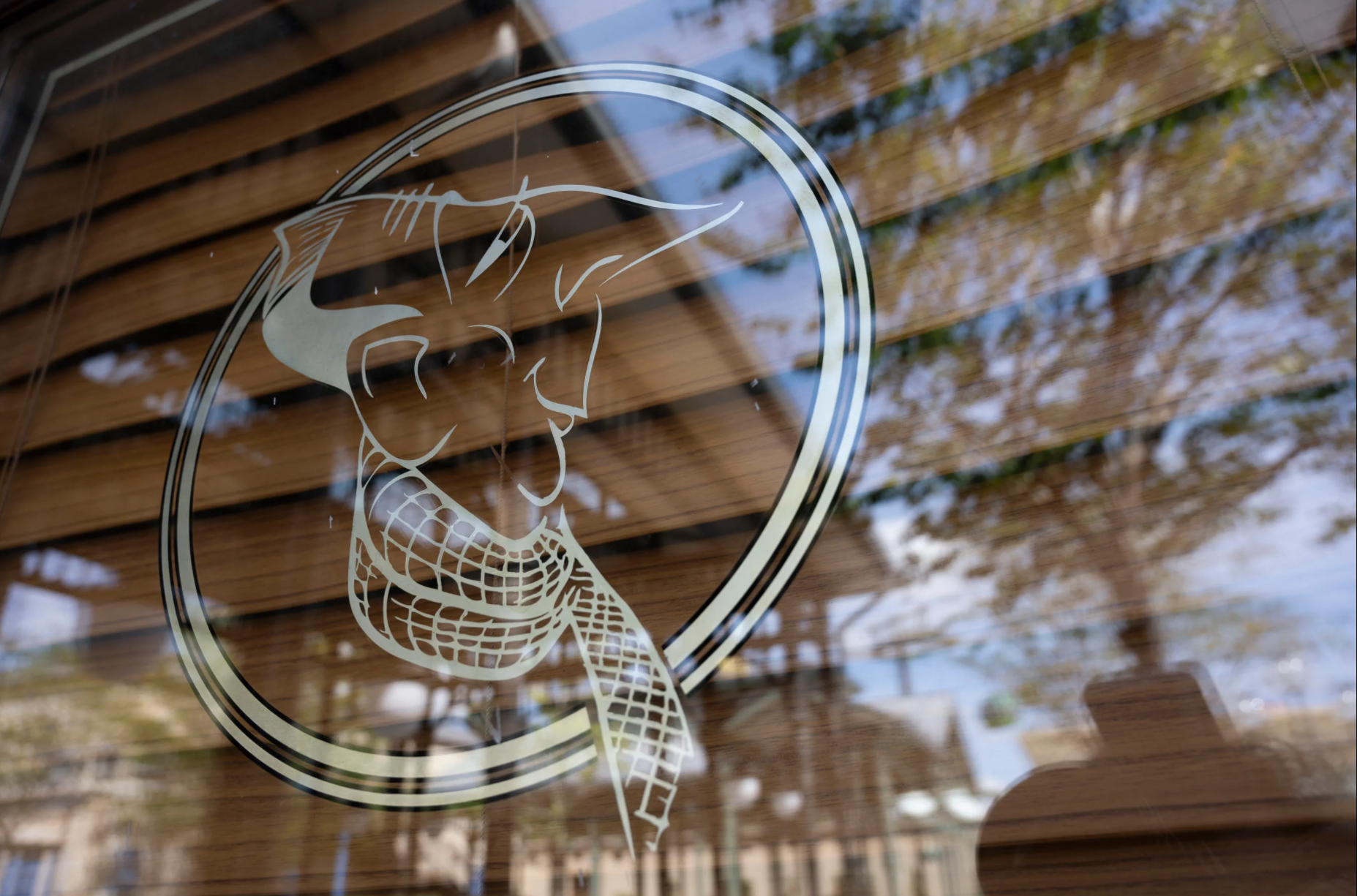 The traditional Brittany hard ciders pair perfectly with both savory and sweet crepes.  You’ll find a sweet doux as well as the less sweet brut and demi sec.  The ciders are imported from France and made from apples within the Brittany region.

The restaurant also offers a prix fix menu with a choice of soup/salad, a savory galette, a dessert crepe and glass of hard cider, soda or juice.

Want your crepes on the go!? Crêpes A Emporter at La Crêperie de Paris is a quick-service spot at the front of the restaurant, located along the new plaza’s promenade. 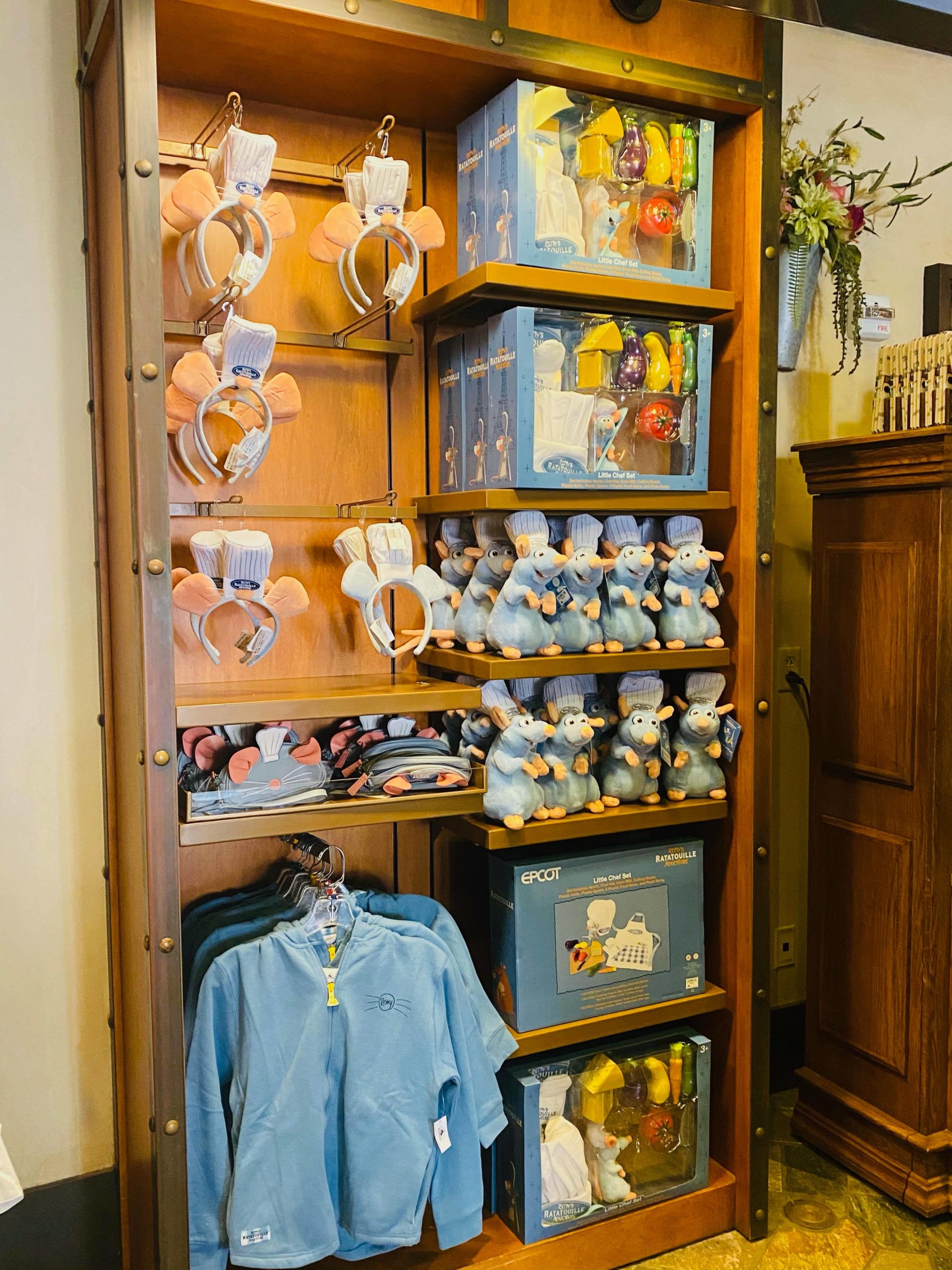 Remy’s Ratatouille Adventure has inspired a brand new line of merchandise that you’ll find at the NEW News Stand near the France Pavilion expansion (as well as other retail locations throughout EPCOT.) Be on the lookout for apparel, accessories, kitchenware and more!

One of our favorites in the collection is a NEW interactive Chef Hat that looks as if Chef Remy is cooking alongside the wearer. 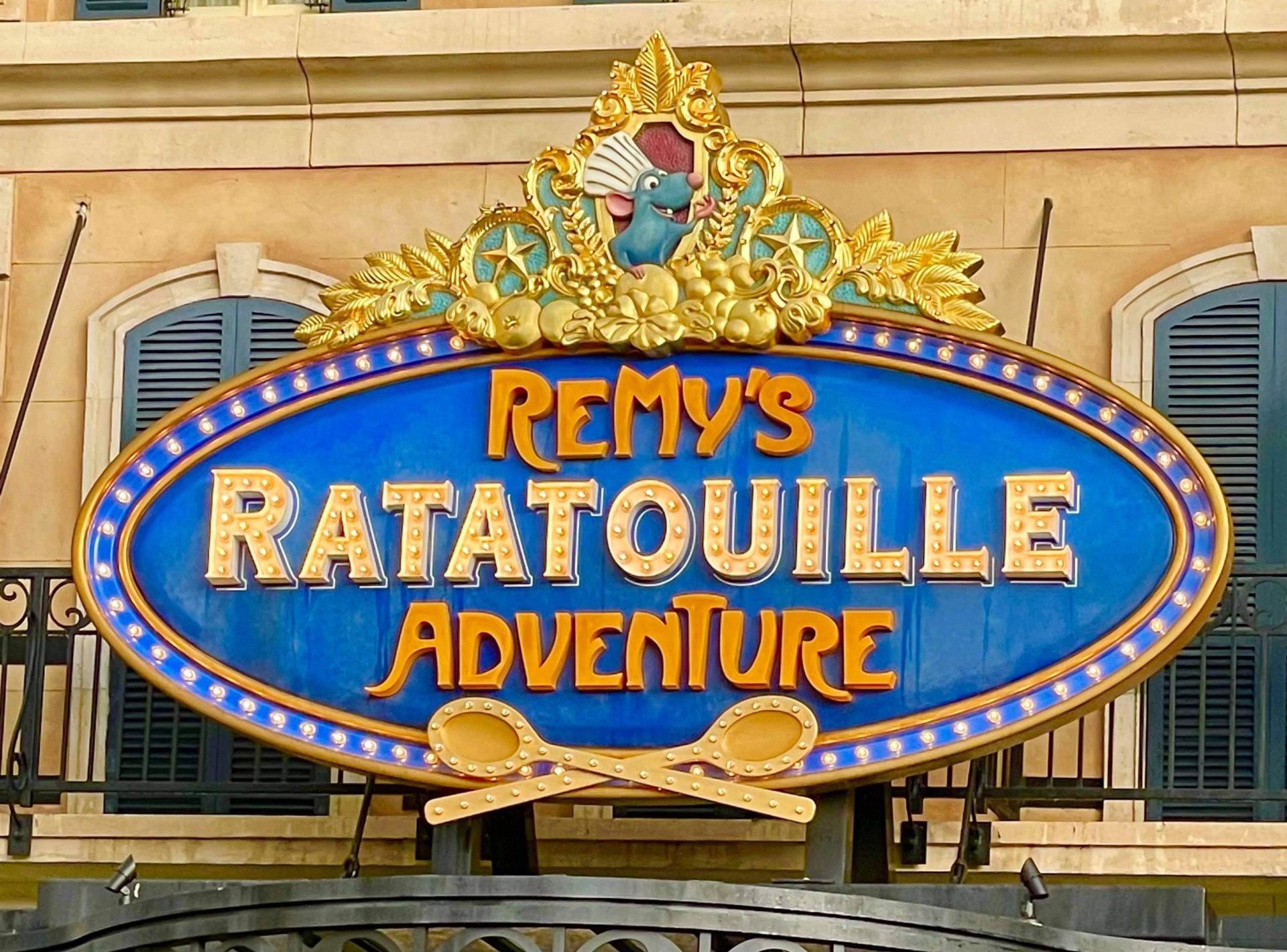 Be on the Lookout For These Ratatouille-Inspired Details 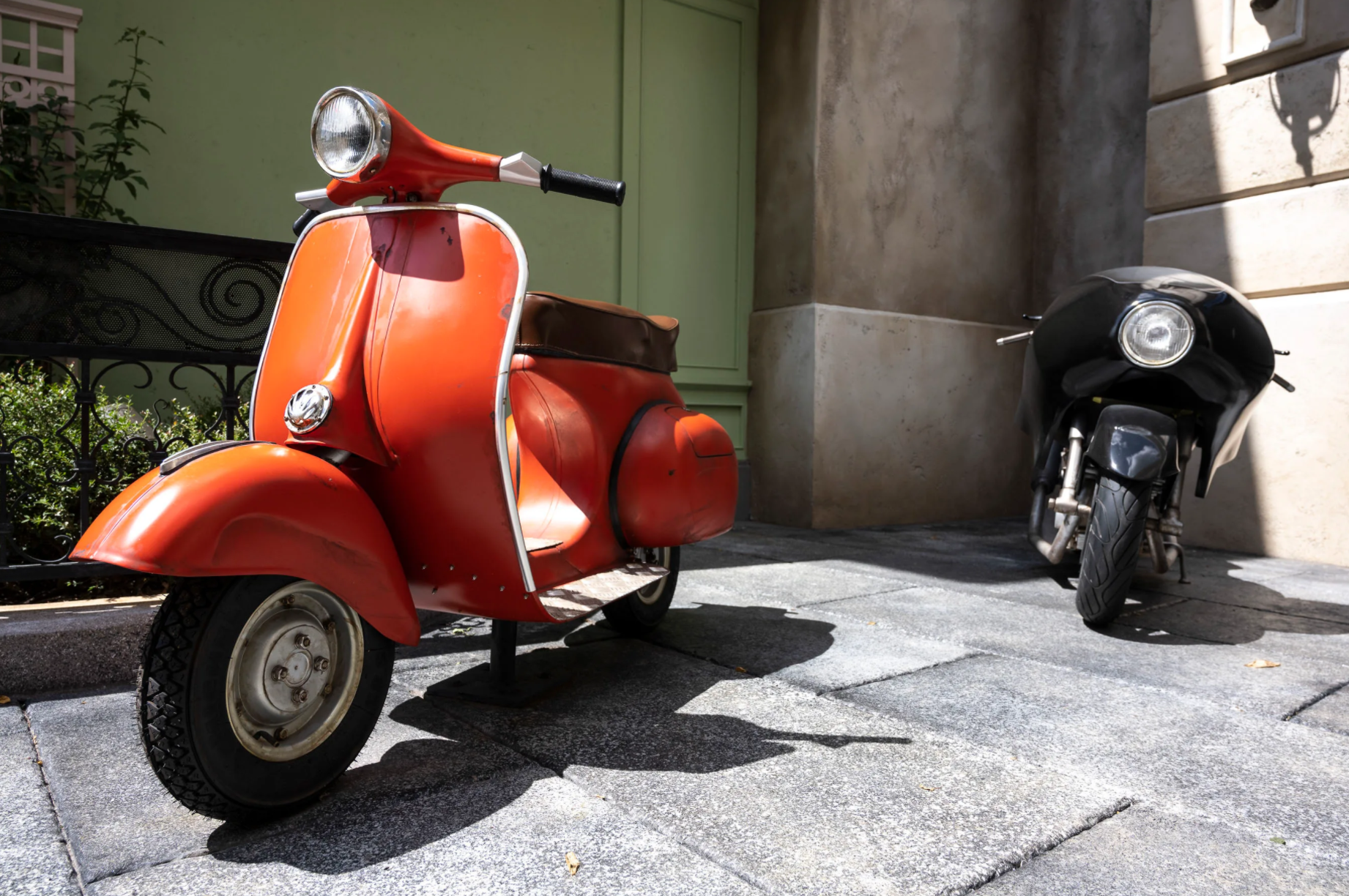 Readers are encouraged to keep following along with MickeyBlog for more incredible Ratatouille news and updates!