How Would I Rank the Rides at Hollywood Studios?

Imagineers reinvented this park on the fly, committing to IP-based themed lands for Toy Story and Star Wars.

We’re probably three years away from another ride here. So, this seems like the best time to answer a big question.

How would I rank the rides at Hollywood Studios? Well, I’m glad you asked…

(Note: The odds are more than one in 360,000 that your list will line up exactly with mine.

So, it’s totally fine that you disagree! Mathematically, it’d be weird if you didn’t.)

I’ll start this with an unexpected statement. I really like Star Tours! I’ve ridden dozens if not hundreds of times over the years.

I mean, I’m old enough to have ridden it when it was still new…and the original version!

Pardon the cliché, but Star Tours has aged like fine wine or Dame Judi Dench. It just keeps getting better, and nobody’s quite sure how.

Over the years, Disney introduced randomization, meaning that you could ride Star Tours ten times in a week and not duplicate the experience. 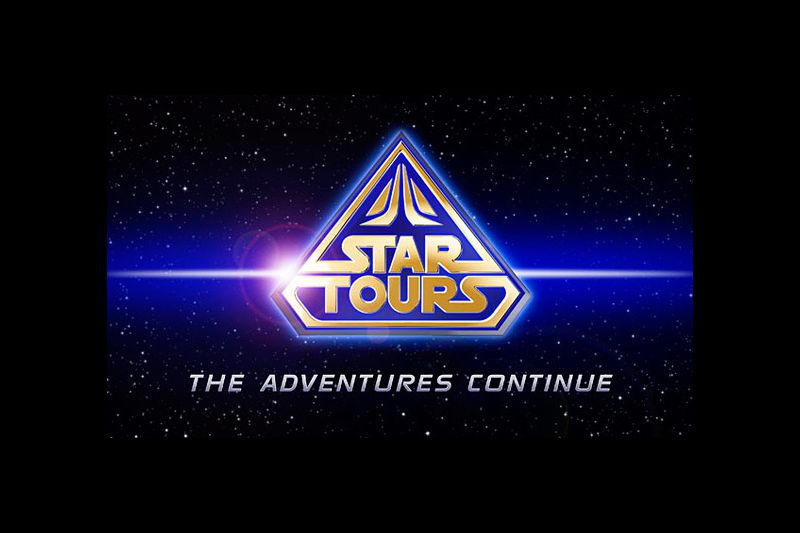 Honestly, my only criticism with the ride is that it’s reached “been there, done that” territory by now. Also, the new Star Wars movie footage feels lackluster.

I’m always praising this ride to friends and am more likely to ride it multiple times than anything else at the park. 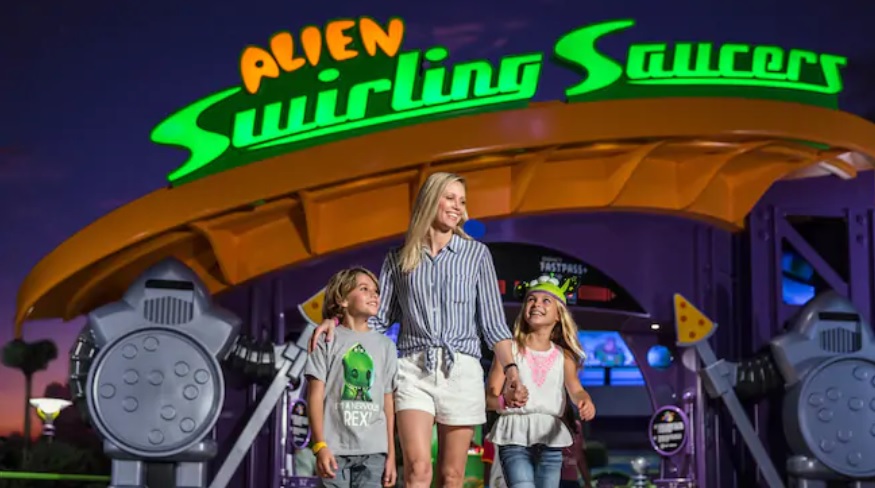 I say this to note how spectacularly deep Hollywood Studios is now. There are seven rides better than this one, which I adore!

I realize that some cynics abbreviate Alien Swirling Saucers to describe it, which is probably something Disney should have considered when naming it. 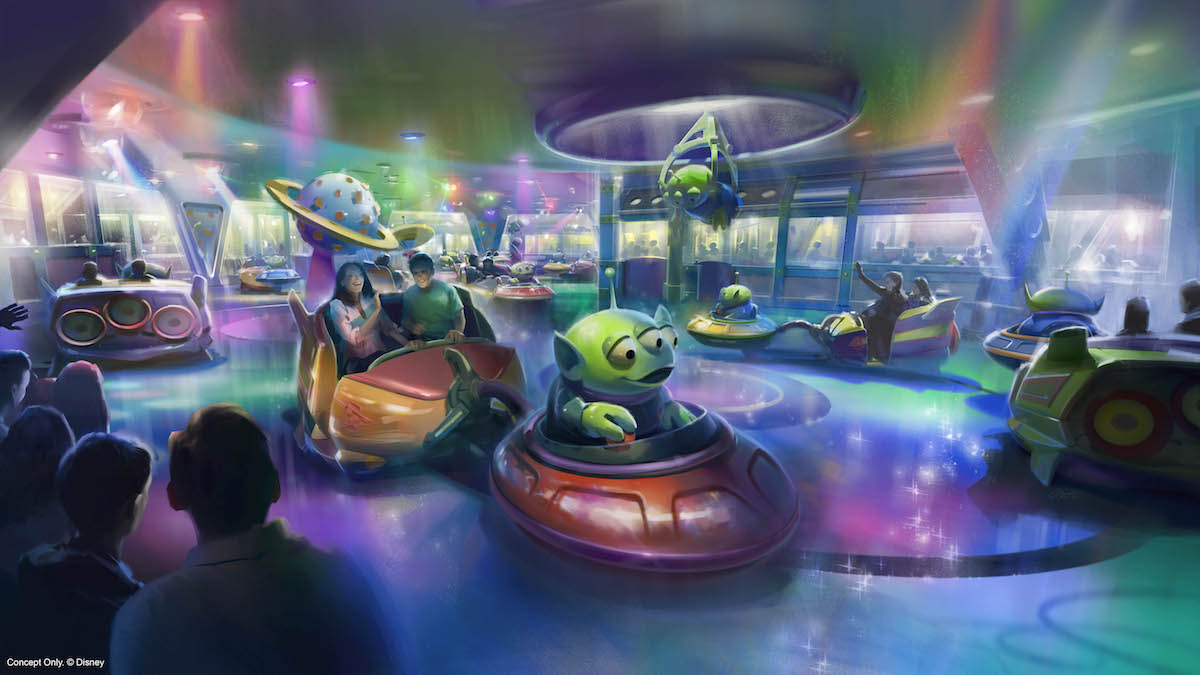 Still, my wife and I laugh like infants watching jangling keys when we smash into each other on this ride. It’s pure fun and wholly lacking in pretension.

Theme parks need more of that!

Look, if there are six rides better than this in the park, you NEED to visit Hollywood Studios, preferably over and over again. 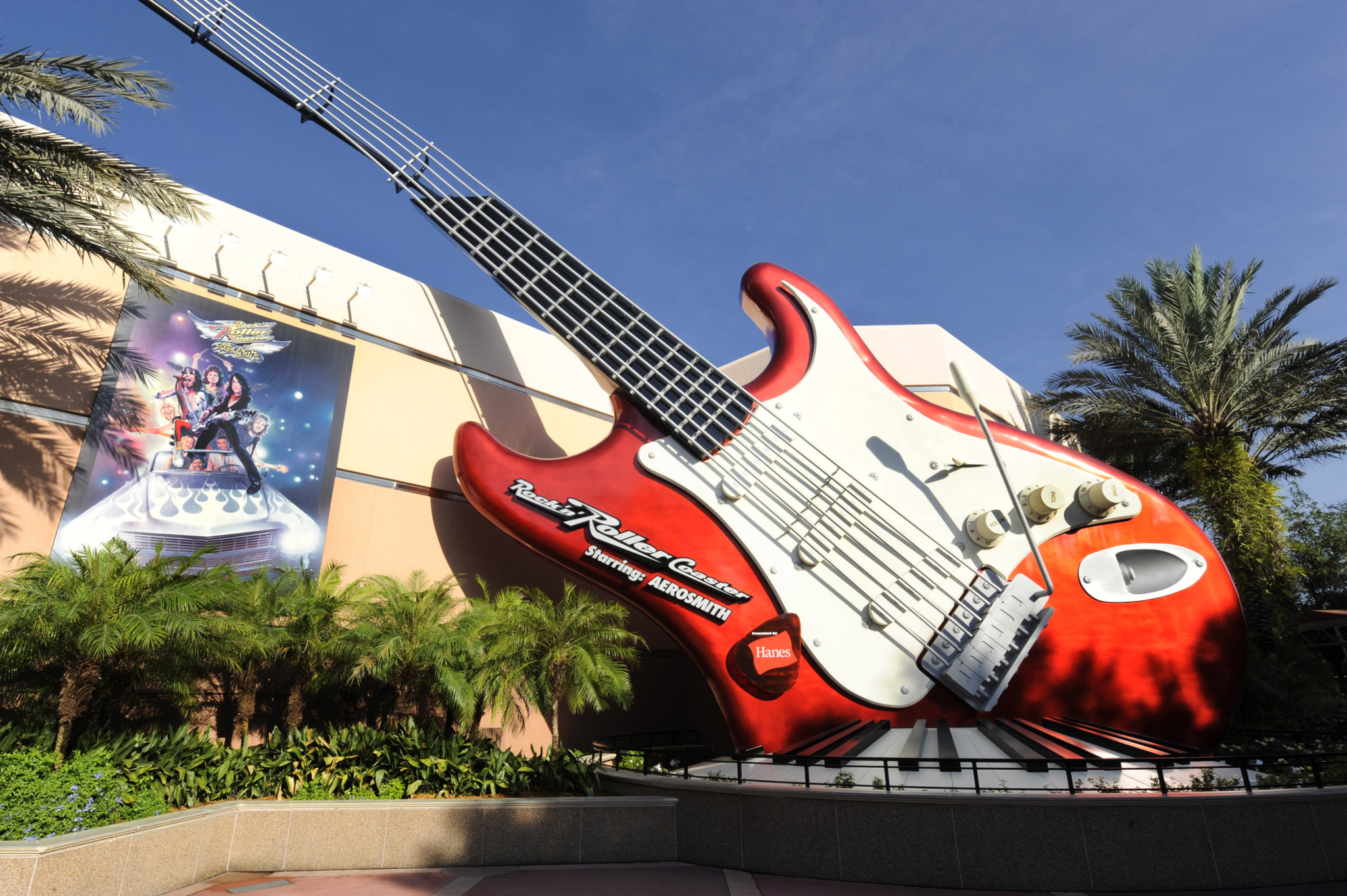 I’ll acknowledge that Rock ‘n’ Roller Coaster delivers a bumpy ride, especially when you forget to push your head back against the seat.

That initial burst of speed will slam your head back against the headrest anyway. So, it might as well be your choice.

Once you adapt to the speed, you’ll experience pure euphoria as you rock out to Aerosmith while zooming down the “interstate.”

The design of this ride borders on mean, as you’ll struggle to catch your breath until it ends.

I quite like Rock ‘n’ Roller Coaster, but I’ve banged my head enough times that I’m wary of it, too.

I struggled with how to rank this one. In a way, Smugglers Run counts as a modernized version of Star Tours.

You’re still bouncing in your seat as you watch the proceedings on a digital display.

The difference is that Imagineers built a cockpit, creating the illusion that you’re flying the Millennium Falcon, probably the coolest spaceship ever.

I…haven’t done that yet. After about eight attempts, I’m still happy when I don’t drive the ship into walls more than 10 times. I’m…rarely happy.

In future years, I suspect that I’ll enjoy Smugglers Run more once I’m better at it. For now, my own incompetence holds me back from grading it higher. 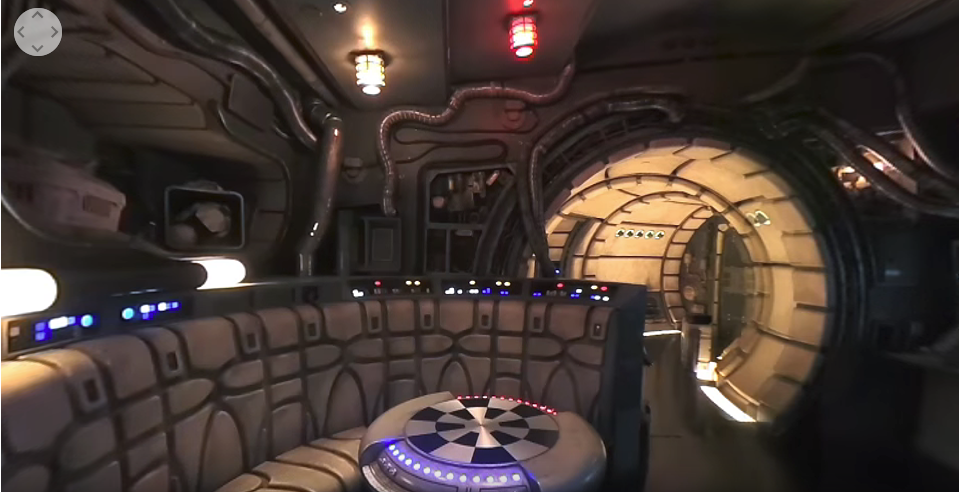 Scoring multiple payloads of Coaxium is such a rush, though.

Confession: I initially ranked this seventh…but it just felt wrong. I kept moving it up as I thought about it more.

For the longest time, I would have argued that the two best rides at Hollywood Studios were Toy Story Mania! and one we’ll discuss in a bit. 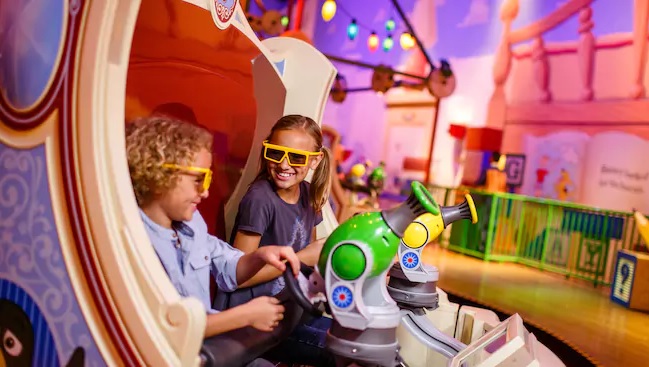 Back then, my greatest lament involved the wait times for Toy Story Mania, which often surpassed an hour.

When Disney added a third track, I went nuts and rode Toy Story Mania! as much as five times in a day. Seriously. And I’m a dude with a grey beard, not a kid. 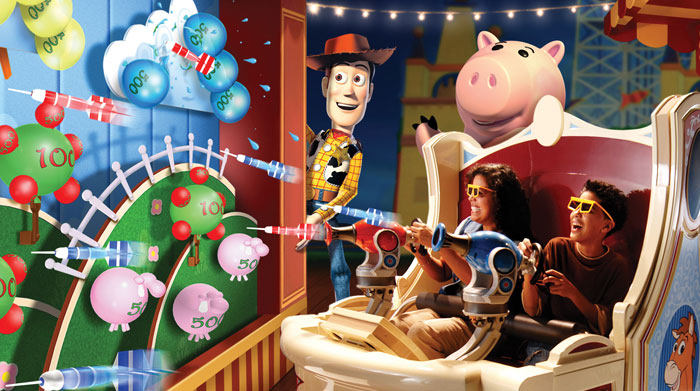 Alas, I may have gotten a bit burnt out on the ride, which explains why it barely squeaked into the top five.

Then again, it might be that my wife started beating me at this, which made it less fun. I’m petty like that. 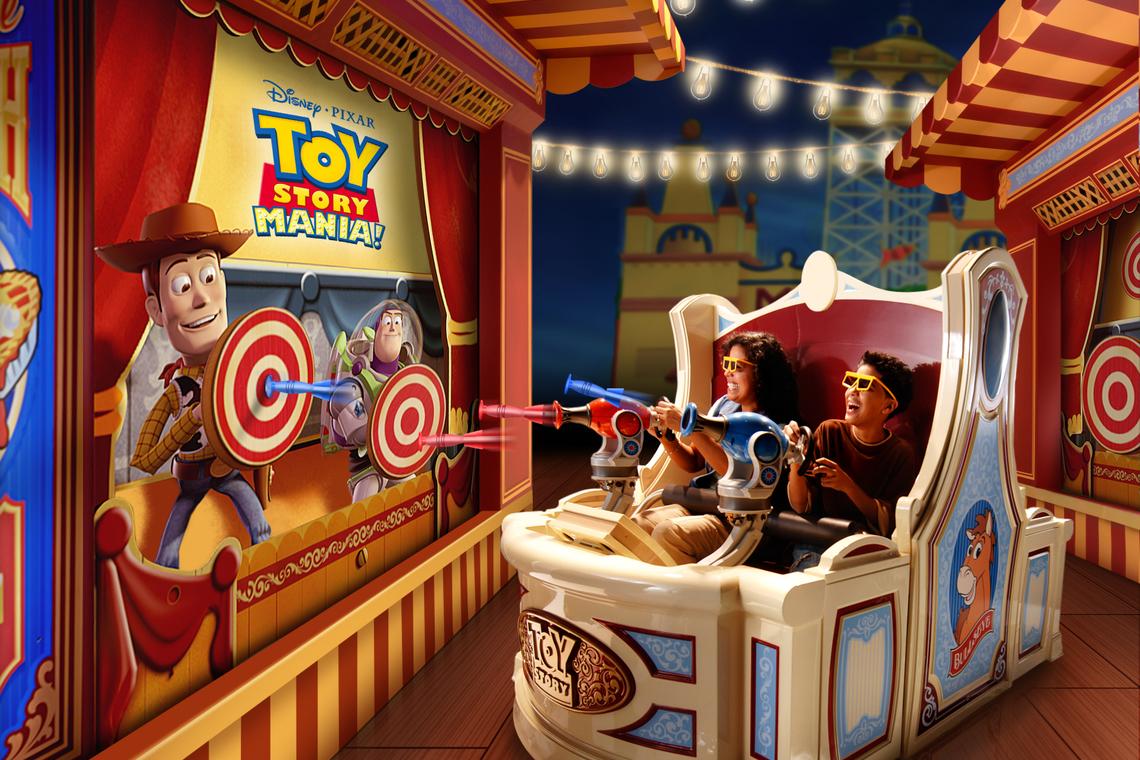 Yes, Slinky Dog Dash is among the shortest Disney roller coasters ever, especially if we eliminate the junior coasters from the conversation.

Also, yes, Slinky Dog Dash takes a break in the middle of the ride, thereby stretching the length.

I don’t care about either of those things. What matters to me is that this ride takes its name seriously.

The Slinky is a wonderful toy, as the jingle suggests. And Slinky Dog Dash proves it by showing off the spectacular physics of the concept. 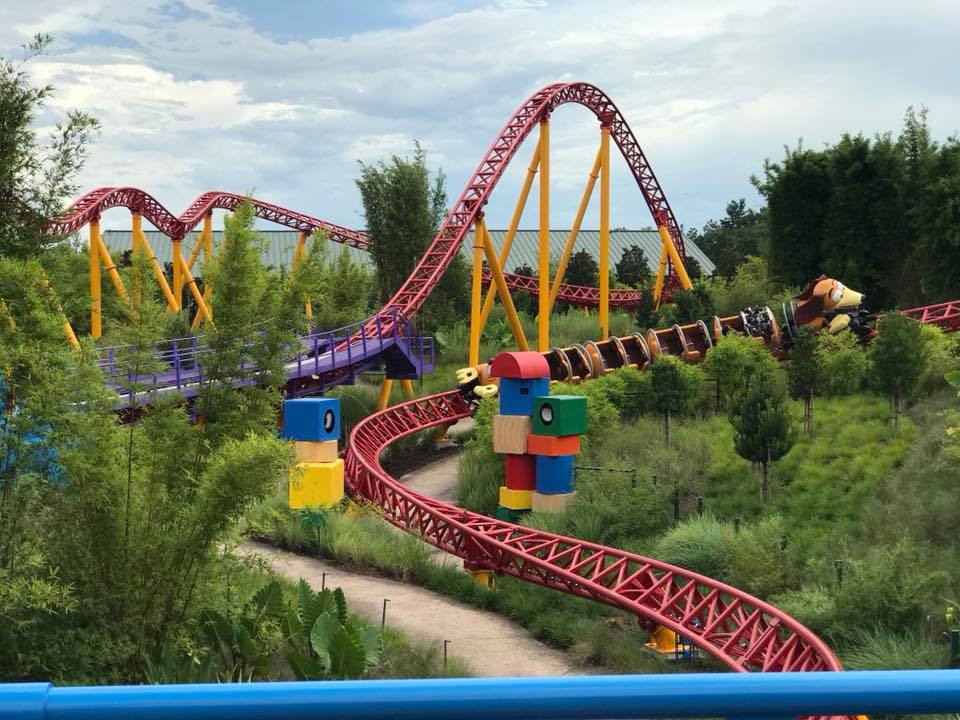 You’ll stretch and then spring back on your coaster cart, proving that scientific demonstrations can be fun!

Plus, the theming on Slinky Dog Dash is world-class. You’ll notice many of Andy’s toys around the construction set that you’re riding as a toy-sized human. 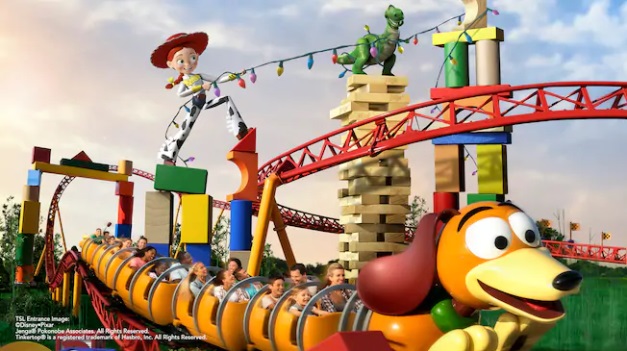 3) Star Wars: Rise of the Resistance

I won’t lie. I struggled with how to rank the top three. Others will probably think I’m crazy to list this one third, but I should admit I’m not really a Star Wars fan.

That probably factors in, at least somewhat. Also, the other two attractions we’ll discuss are both perfect in their own ways. For that matter, so is this one.

When Imagineers planned Rise of the Resistance, they aimed high. It’s not hyperbole to suggest that this is three or four different theme park rides in one.

You’ll appreciate this more if you watched a computer representation of Rise of the Resistance without the themed elements.

So much is going on that it’s almost overwhelming. The ride even breaks into two parts, as something akin to a pre-show is a complete experience on its own. 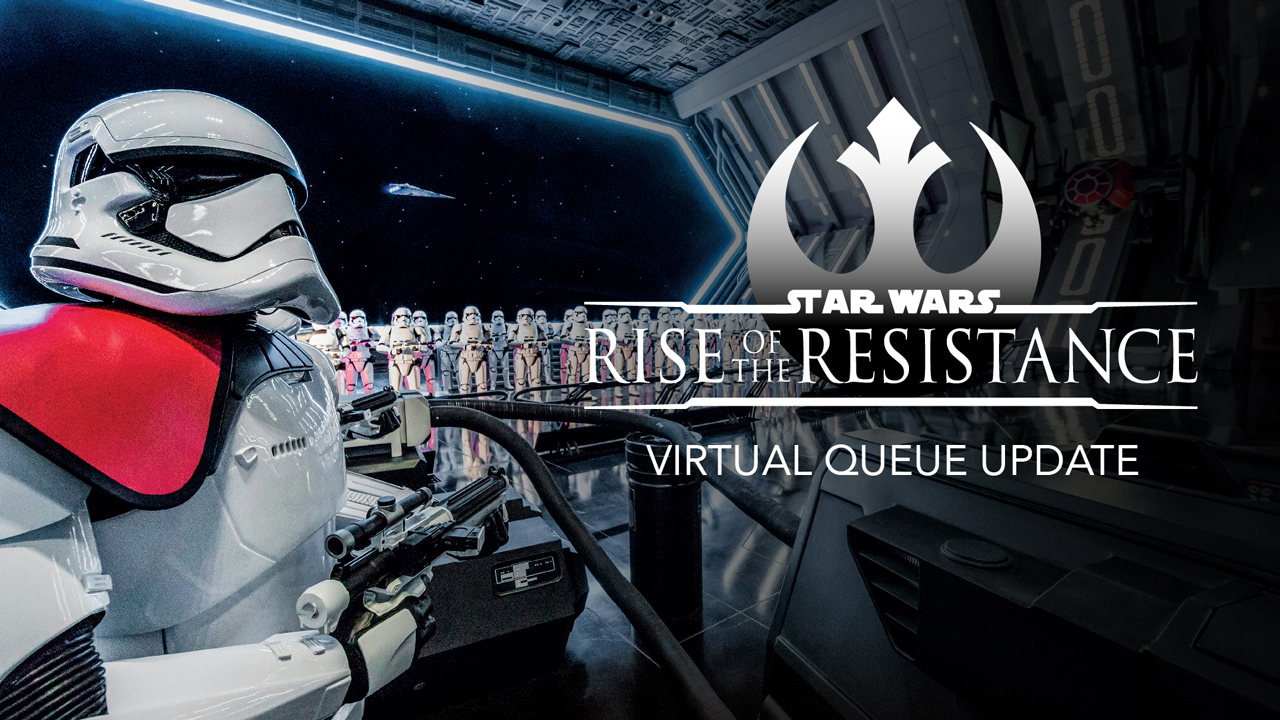 The totality of Rise of the Resistance stakes its claim as the greatest theme park attraction in the world, a point I readily acknowledge.

However, this isn’t an assessment of majority opinion on ride achievement. It’s one person’s opinion. And I happen to like two rides more.

2) The Twilight Zone Tower of Terror

If I ranked this evaluation based solely on lifetime enjoyment, Tower of Terror would win in a walk.

Since the 1990s, I’ve looked at the Hollywood Tower Hotel in the distance and known that it was there to entertain me.

I find the entire situation fascinating. Disney’s storytelling intellectual property unquestionably stands as the best in the world.

Somehow, one of the best Disney rides ever doesn’t stem from a Disney story, though.

Instead, Imagineers relished the idea of creating a gothic horror story, one that transports guests to the Twilight Zone.

I’m on record as calling Tower of Terror the greatest dark ride ever, even though it possesses a drop tower design.

From the moment Rod Serling starts talking, everyone buys into the premise of a haunted elevator. 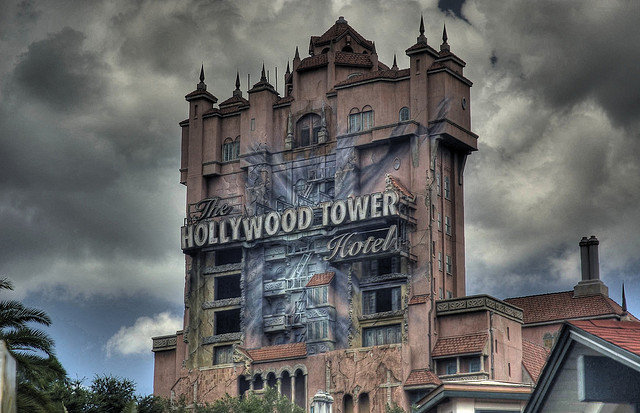 This ride is perfect, making it that much harder to believe that Disney built something even better.

There’s a new king of the hill at Hollywood Studios. In fact, four out of the top six attractions are three years old or less.

Well, that detail depends on when you read this, as Slinky Dog Dash turned three on June 30th, 2021.

The point is that Disney officials recognized a weakness at Hollywood Studios. It just didn’t have enough E-Ticket attractions.

So, Disney may have overcorrected in delivering several brilliant attractions in a short time.

In my opinion, the best of them is Mickey & Minnie’s Runaway Railway, the best Walt Disney attraction that he never made. 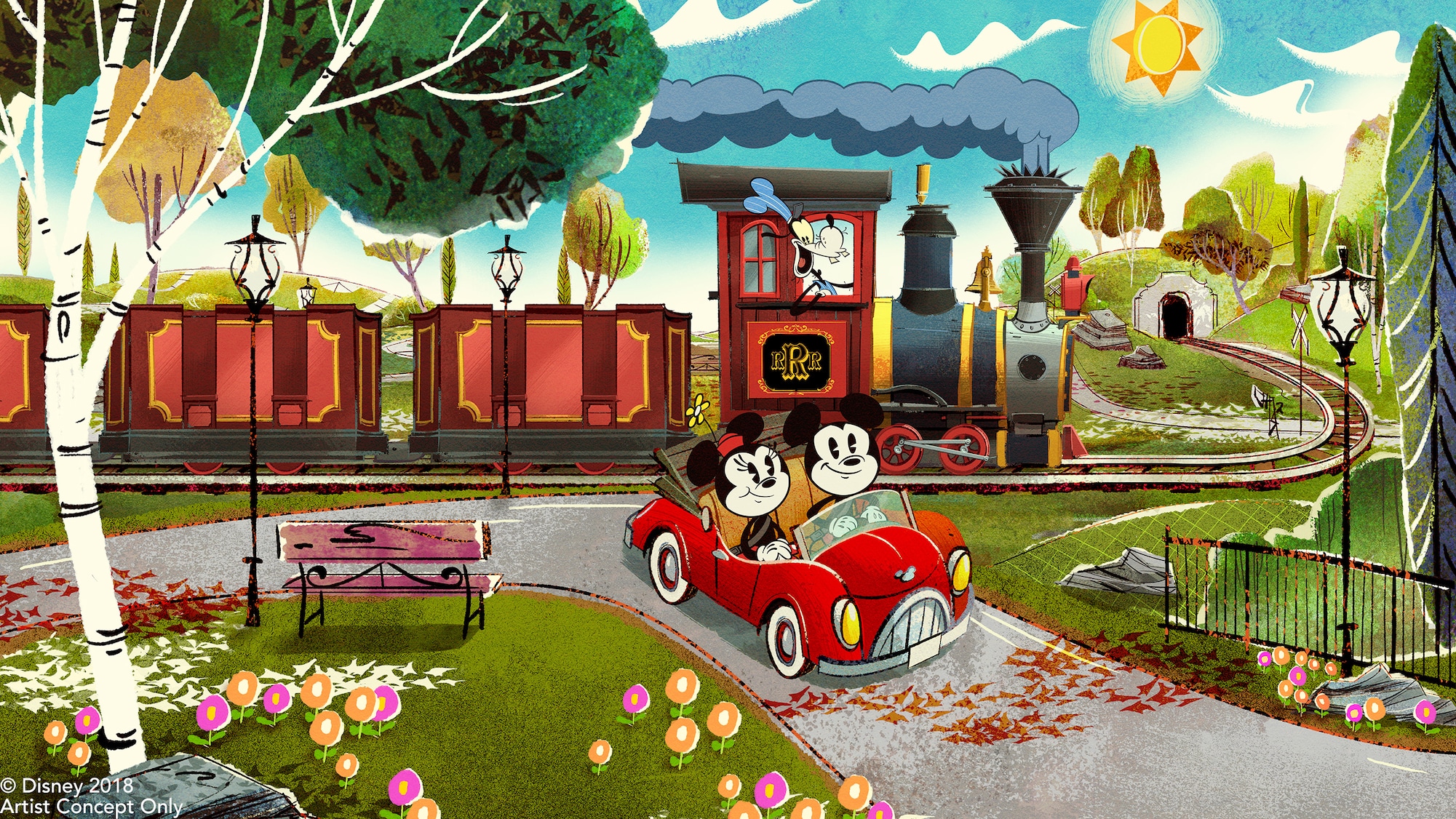 Uncle Walt created Mickey Mouse nearly a century ago. Since the 1950s, the character has starred in many character greetings and meals.

What Mickey Mouse hadn’t done until 2020 was star in a ride. Just before the pandemic, Imagineers changed that by introducing this ride. 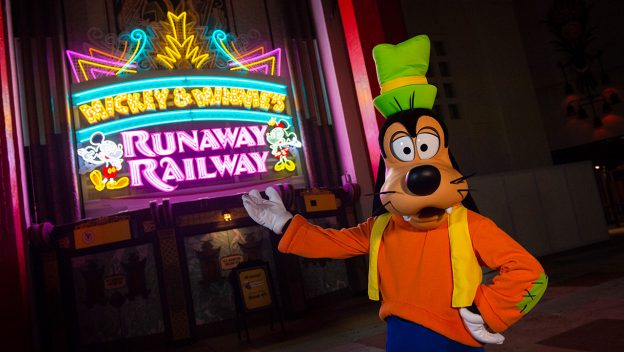 Mickey & Minnie’s Runaway Railway allows children to live out their greatest fantasy, entering the cartoon world where the benevolent king and queen of Disney live!

Even better, the attraction exceeds all our hopes for this dream. It’s a joy from start to finish, as Goofy drives us into trouble before heroic mice save the day. 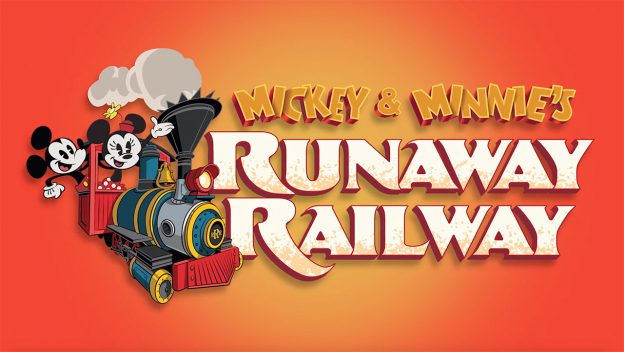 The colorful visuals mesh perfectly with the hairpin action as guests survive a cyclone, a river plunge, and a…ballroom dance.

Imagineers cleverly combined many cartoon adventures into a single themed ride. The outcome dazzles me and makes me happy to be a Disney fan.

I miss The Great Movie Ride more than I can ever explain, but its replacement claims the title of the best ride at Hollywood Studios.