Before we begin, let me start off by saying that from here on in, there will be spoilers for the first episode of Loki, so if you haven’t seen the show yet, you’ve been warned.

To celebrate the premiere of possibly the most anticipated of the Marvel Disney+ series, we’re going to be talking about 10 easter eggs from the first episode of Loki. Here we go!

When Loki is first walking (or being marched in!) into the TVA, a Skrull can be seen standing by the front desk.

Avid viewers of the Marvel Cinematic Universe will recognize the Skrull species from their appearance in Captain Marvel, Spider-Man: Far From Home, and most recently, in the WandaVision finale.

A “Nexus event” is what happens when you step off your destined time path, as described by Miss Minutes in the TVA video.

Nexus might be a familiar name, as it popped up in one of the WandaVision commercials as a “unique anti-depressant”. 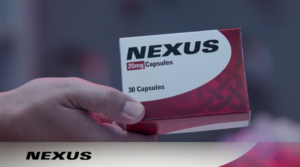 While we’re on the topic of Nexus, Miss Minutes tells of a Nexus event that caused an uprising with a video showing what looks like the Kree battling it out with the Nova Corps. 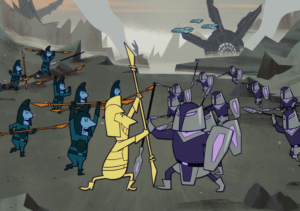 All the way back in the first Guardians of the Galaxy movie, Ronan talks about the same war between the two, saying:

Once the film of Loki’s life ends, you can see that the film is labelled “ETH-616”, as a direct reference to the main Earth within the Marvel Comics, Earth-616.

The main Earth we see in the Marvel Cinematic Universe, however, is Earth-199999.

When Loki gets the Tesseract from Casey’s desk, he sees the infinity stones. Well, all except one…

The Mind Stone is missing from the collection of soon to be paperweights, due to the fact that it is still currently giving Vision life at this point in time.

6. Loki’s Tendency To “Woo”, Then Betray

When talking with Loki, Mobius discusses his tendency to “woo” people before betraying them.

If we remember his demise in Avengers: Infinity War, this is exactly what Loki did with Thanos before meeting his demise.

7. “I am Loki of Asgard. And I am burdened with glorious purpose”

When Loki bumps into the villagers just before the TVA intervene, he says the line “I am Loki of Asgard. And I am burdened with glorious purpose”.

This is a call back to a line which he first utters in 2012’s The Avengers, as well as a nod to the episode title “Glorious Purpose”.

8. Falling Into The Desert

When Loki first escapes New York with the aid of the Tesseract, he lands ungracefully in a Mongolian desert.

The scene is reminiscent of Tony Stark landing in a remote desert in the first Iron Man movie. 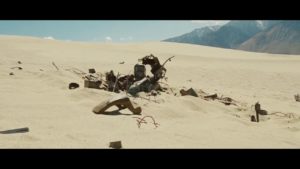 The TVA repeatedly use the visual reference of a singular flowing timeline to refer to the Sacred Timeline, with branches representing deviations. 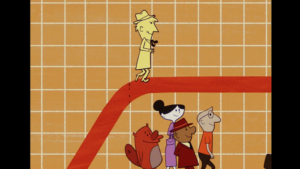 This is very similar to the diagram that the Ancient One showed Bruce Banner while explaining time travel and its consequences in Avengers: Endgame.

You may have been wondering why Loki is referred to as Loki Laufeyson at the TVA trial instead of Odinson.

This is due to Loki’s origins, being the son of the frost giant Laufey, before being adopted by Odin.

Did you catch any easter eggs we missed? Let us know in the comments below!