We all have a favorite land in the Disney Parks; some like the whimsy of Fantasyland, some seek the thrill of Frontierland and others have a love for the futurist draw of Tomorrowland.

For those who love Tomorrowland, shopDisney has released the dress for you to celebrate your favorite land while riding classic attractions such as the Tomorrowland Transit Authority Peoplemover or experiencing the thrills of Space Mountain!

Both dresses come in a purple and blue galaxy color design with constellations seen throughout and a silver trim design on the bodice creating a ‘T’ for Tomorrowland. 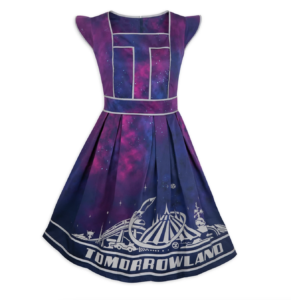 The silhouette of the dress lines up with a midcentury-style dress and comes with winged sleeves. 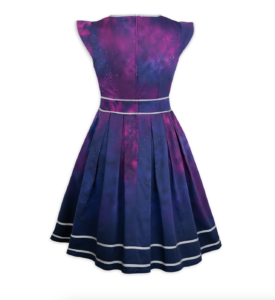 The difference between the two designs is the Tomorrowland print seen on the skirt. 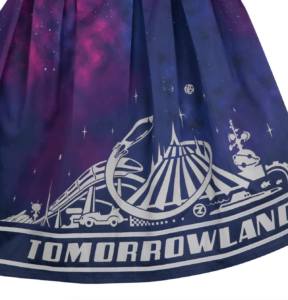 Disneyland Tomorrowland can be seen such as a Submarine from Finding Nemo Submarine Voyage, an Autopia car, Space Mountain and a ‘Z’ representing Buzz Lightyear Astro Blaster.

The Walt Disney World iteration of the dress is, of course, mostly the same until the Tomorrowland silhouette on the skirt. 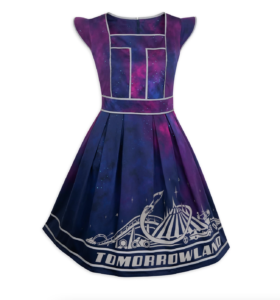 Both of these dresses are available in sizes XS – 3XL with all sizes still currently being in stock on the shopDisney website. 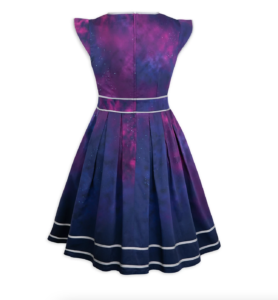 The Walt Disney World design of the dress shows their Tomorrowland attractions, including the Peoplemover, a scream can representing Monster’s Inc Laugh Floor, and even a Tron motorcycle for the upcoming ride! 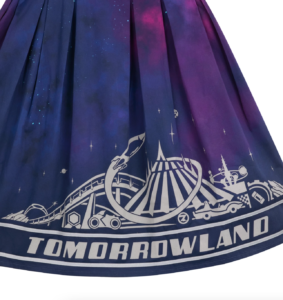 The Tomorrowland dress is officially the third design centring itself around a specific land from the Disney Parks- with Fantasyland and Main Street USA designs having previously been released.

Which land would you like to see next? Let us know in the comments below.