We love all the Value Tier resorts at Walt Disney World. These hotel rooms provide some of the best value on the Disney campus.

Still, I must admit that I have a soft place in my heart for one of the hotels over the rest. 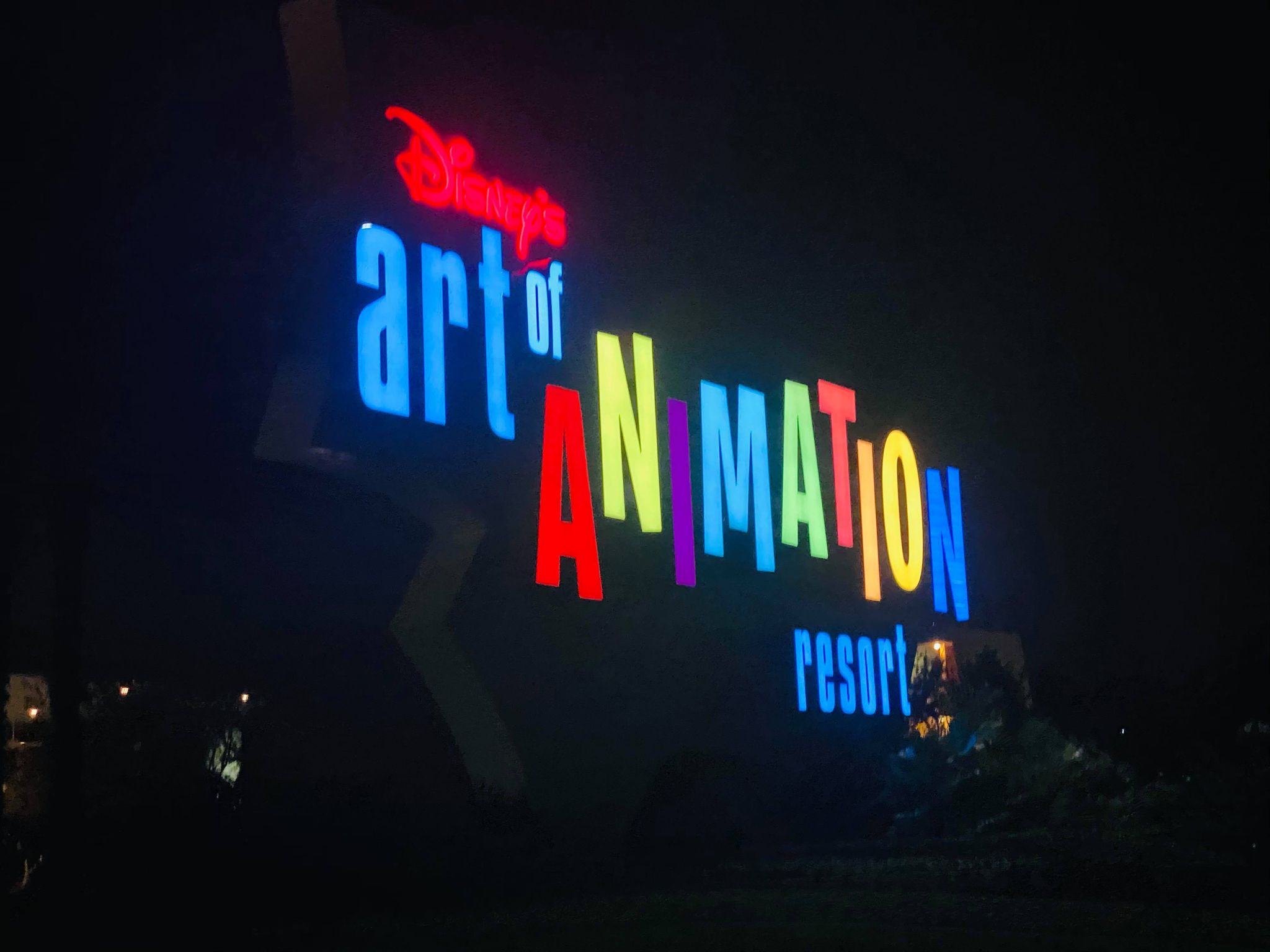 Here are seven reasons why we love Disney’s Art of Animation Resort, a hotel that Walt Disney would have adored.

The newest amenity at Art of Animation will matter to you the most. Historically, your only transportation option at the resort involved buses.

Since the advent of the Disney Skyliner, you can travel directly to two different theme parks.

By using the gondola, you’ll arrive within steps of the front gate at Hollywood Studios.

At EPCOT, you’ll walk a few hundred steps and reach either the France or England pavilion, depending on which direction you choose. 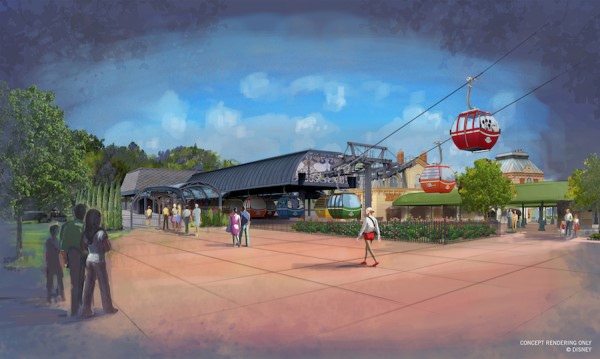 Even better, since the Disney Skyliner remains in constant motion, you will know within a minute or two when you’ll arrive at your destinations.

As you know, buses come with a great deal more randomness. 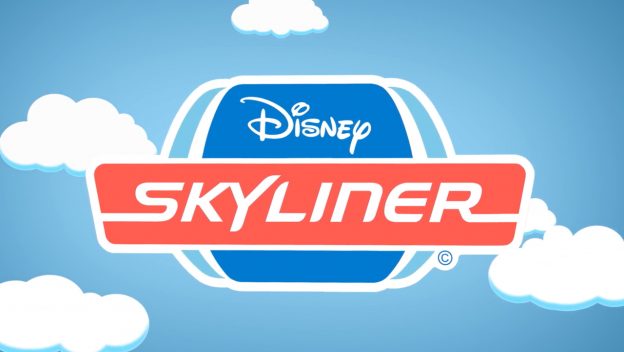 Imagine the largest food court you’ve ever seen. That’ll provide a baseline for what you can expect at Landscape of Flavors.

This Art of Animation restaurant located near the lobby serves a staggering number of guests each day. 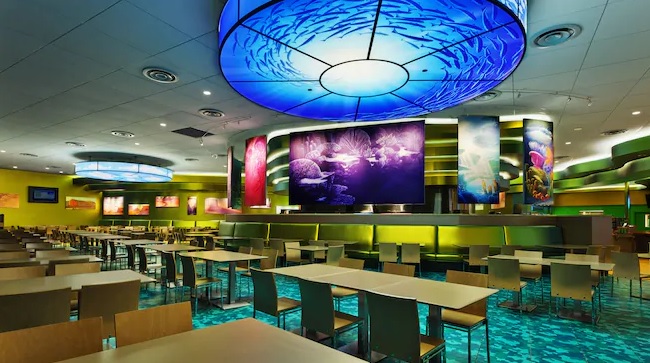 You can eat breakfast, lunch, or dinner here, and you’ll feel overwhelmed by the menu options. 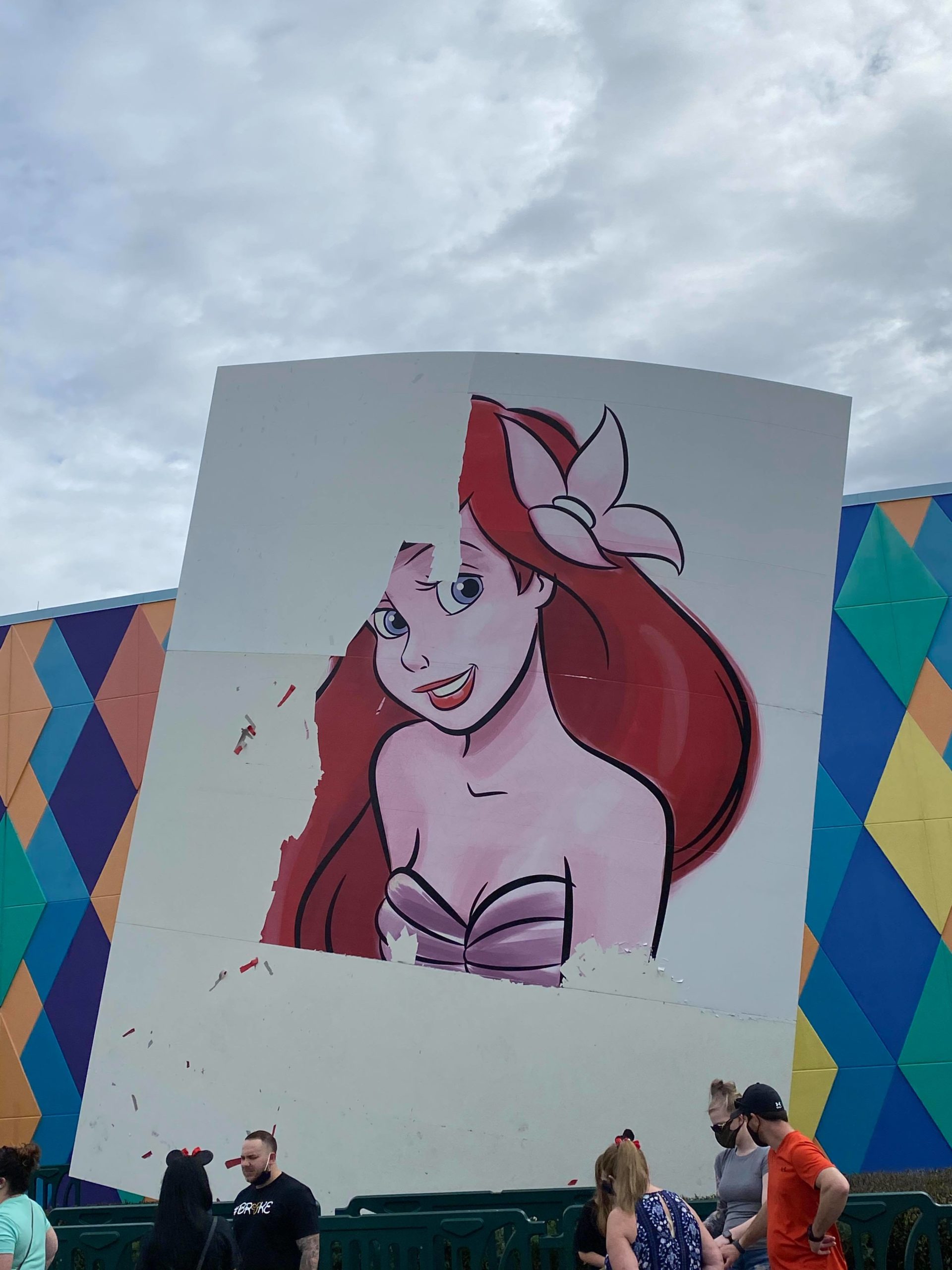 Also, you’ll have your pick of pizza and burger options, including some plant-based ones.

Despite the cafeteria vibe at the restaurant, you’ll eat well. Also, you can dine outside if the interior feels a bit too crowded.

Then again, you can grab-and-go, picking up a meal and taking it to your room. Parents loooove this option.

Do you love Disney animated movies? Of course, you do! I mean, who doesn’t? 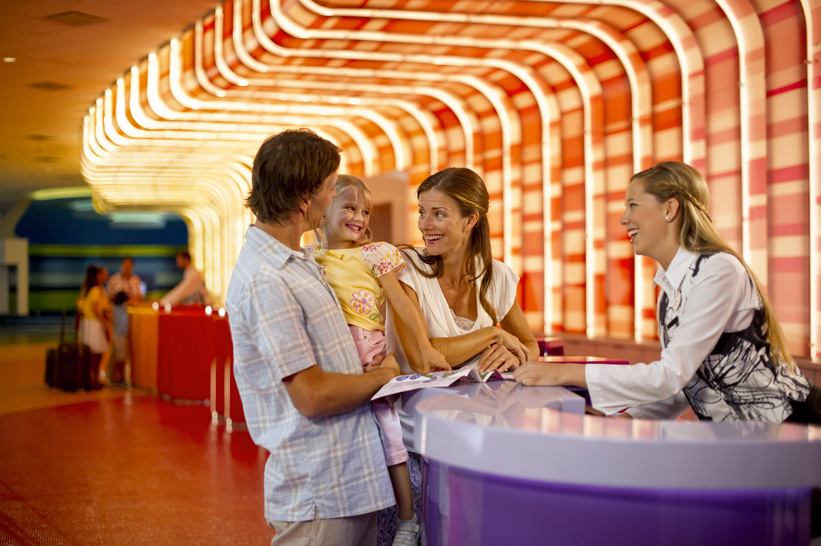 Well, as a fan of the most outstanding animated titles ever, you owe it to yourself to spend some time in the hotel lobby!

Disney takes the name of the resort to heart. At Art of Animation, you’ll find lithographs of many Disney films.

Remarkably, you might not even recognize some of the images. That’s because they never became a part of the movies!

In some instances, you can track the development of characters like Ursula from their initial illustrations through their film implementations. 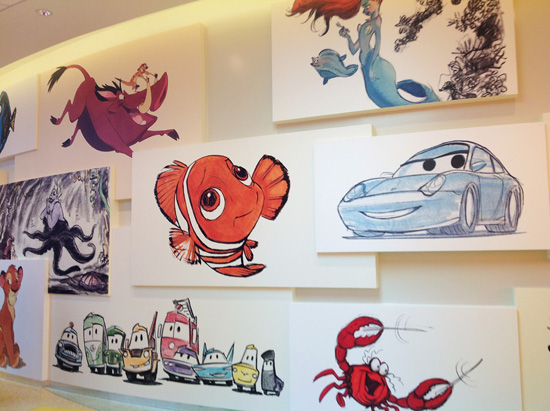 I’ve spent a lot of time here, and I’m always in awe of this lobby. It exemplifies the reason why Disney is nearly a century old.

Walt Disney would have treasured Art of Animation’s lobby. It’s a monument to his greatness. 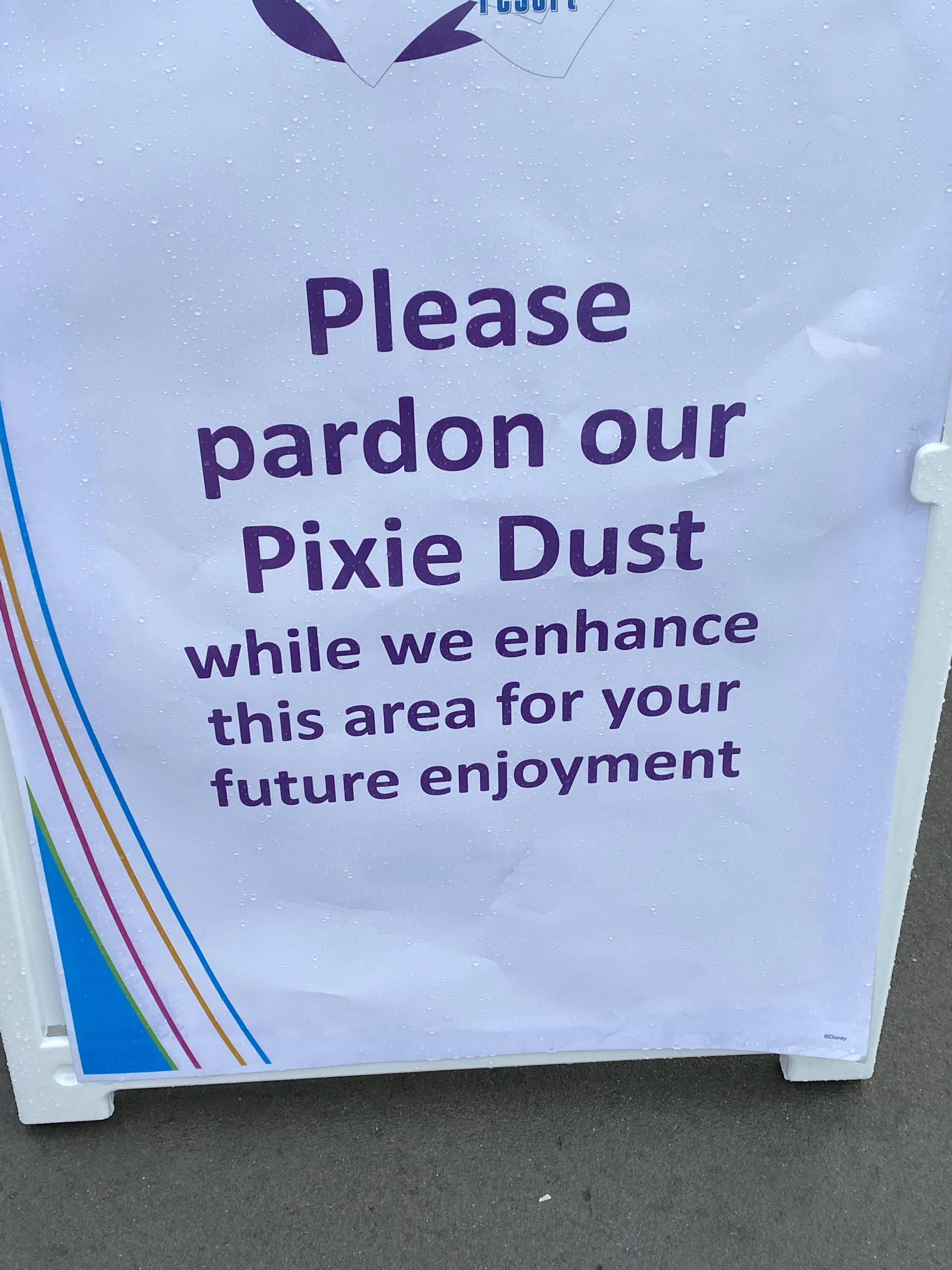 You will not lack pool options at Art of Animation. In fact, you may feel overwhelmed with choice. 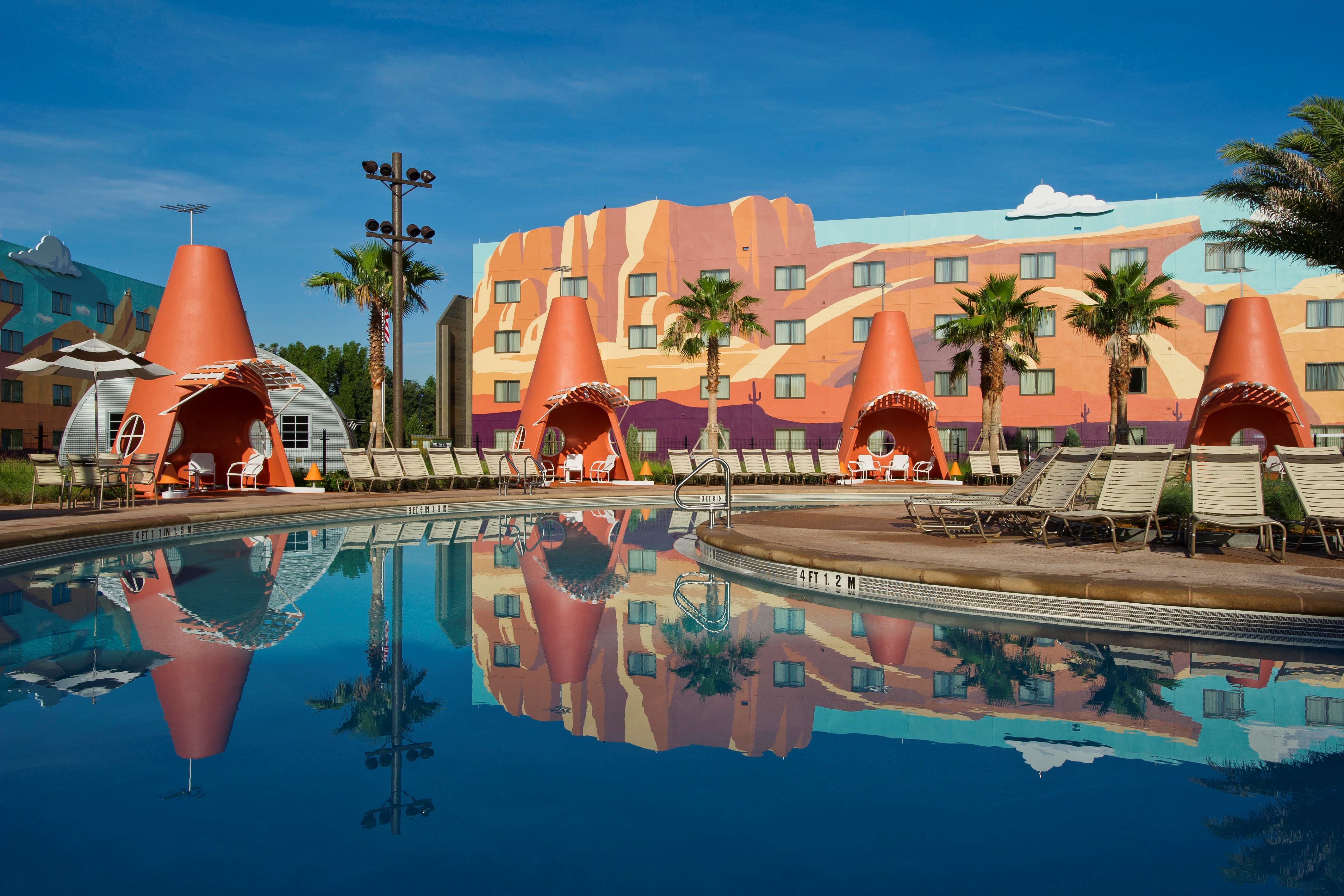 Seriously, this pool qualifies as the largest at Walt Disney World. It’s massive in size and guarantees that you’ll always have plenty of room to move.

Remarkably, Art of Animation hosts other pools, too! The most recognizable one is the Cozy Cone Pool.

You may recognize that name, as the Cozy Cone Motel features in the Cars movie franchise as the place to stay in Radiator Springs. 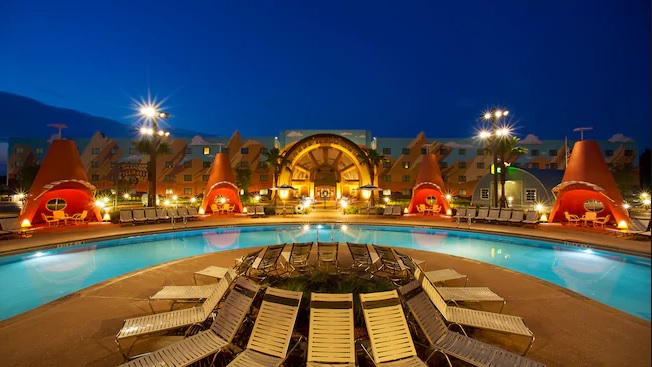 The pool leans heavily into its Cars theming, which delights children.

Of course, your kids may not love Cars. If so, you have a third choice. The Flippin’ Fins Pool plays into the backstory of Under the Sea. 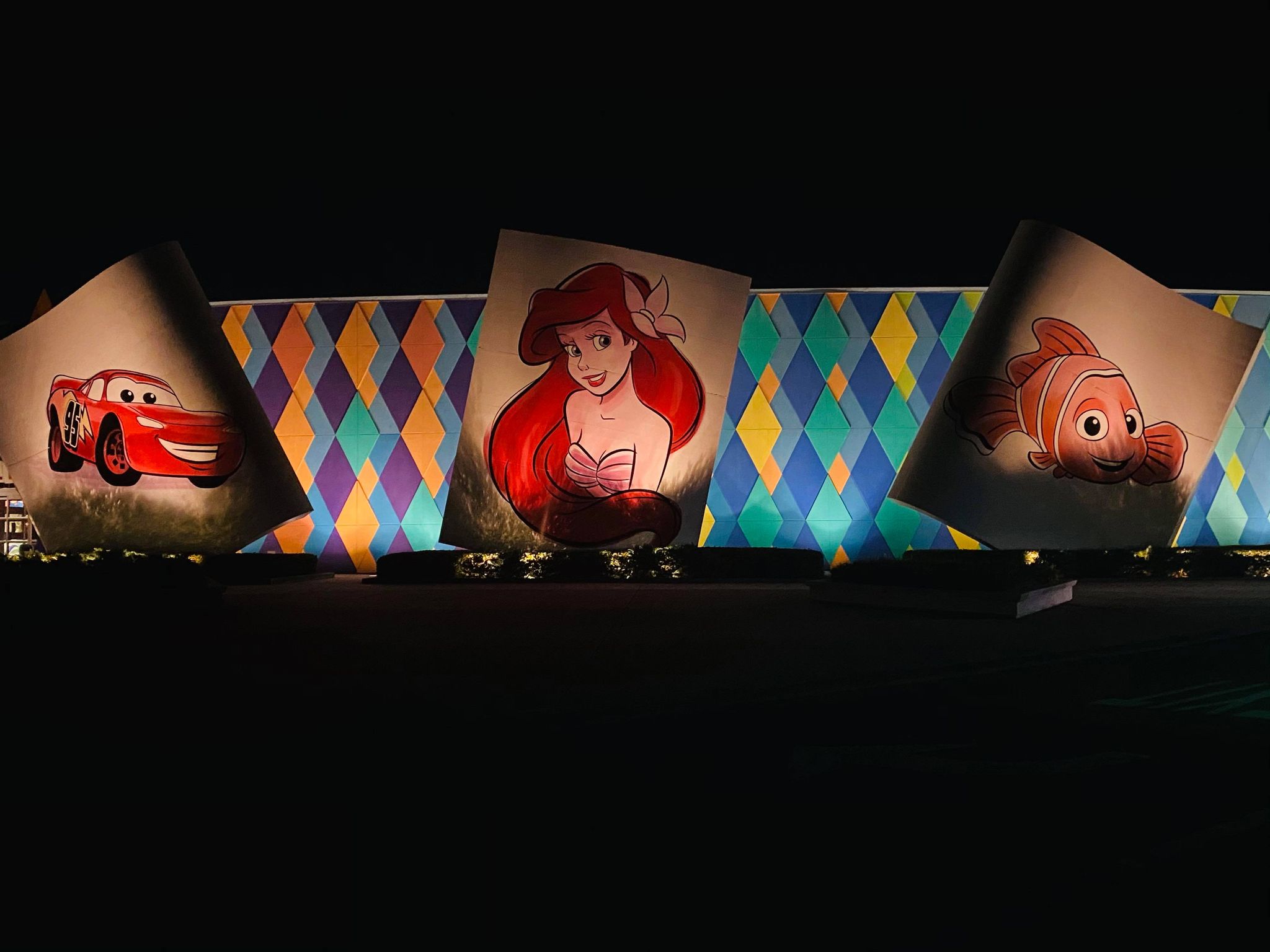 Sebastian from the movie conducts the Under the Sea Orchestra. The water feature of him standing in a clamshell makes the Disney movie feel real.

You’ll definitely want your bathing suit at Art of Animation. It’s one of the best parts of the trip! 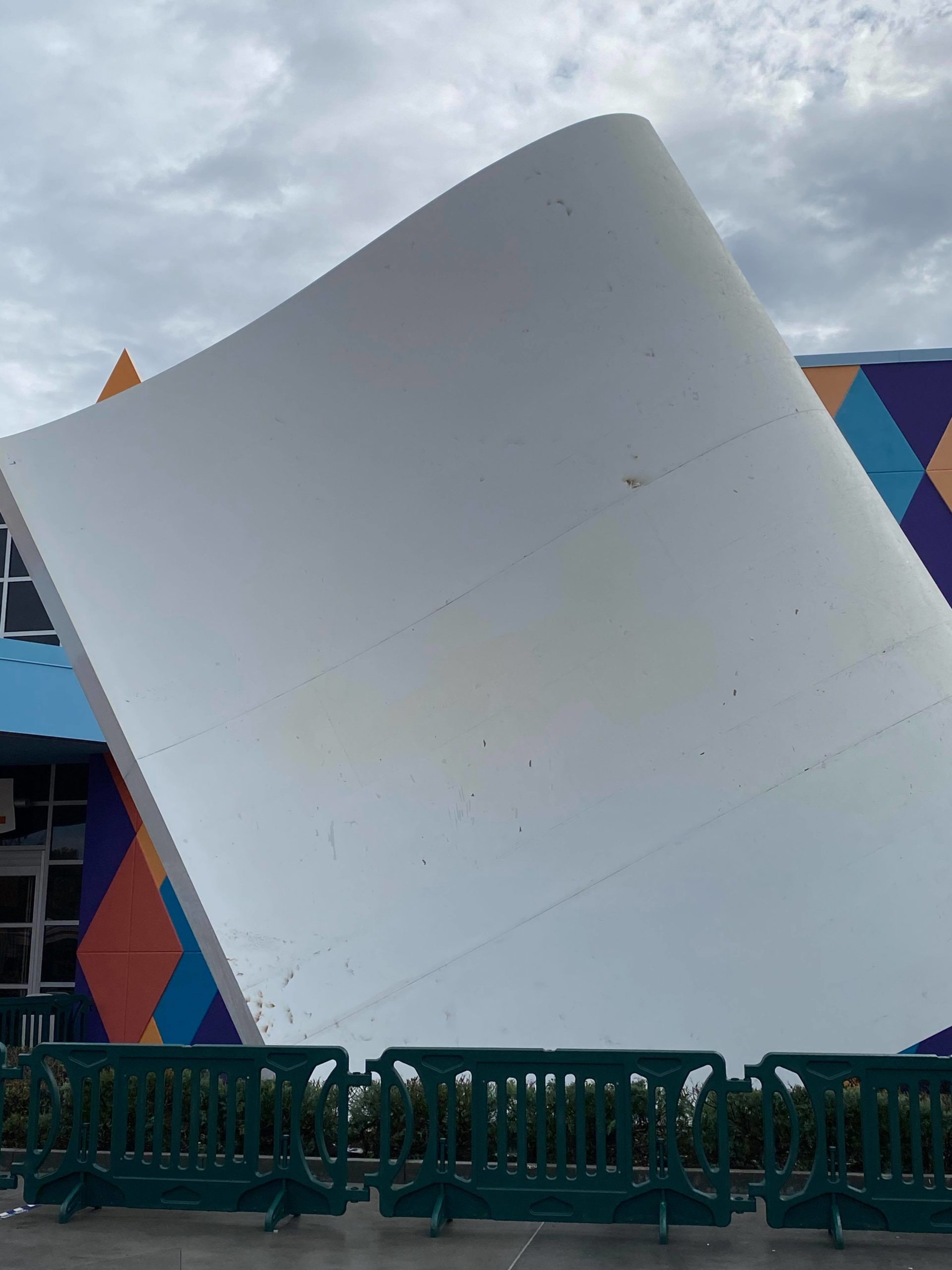 What’s the worst part of your vacation? Look, we all love traveling, especially when we get to visit Walt Disney World! 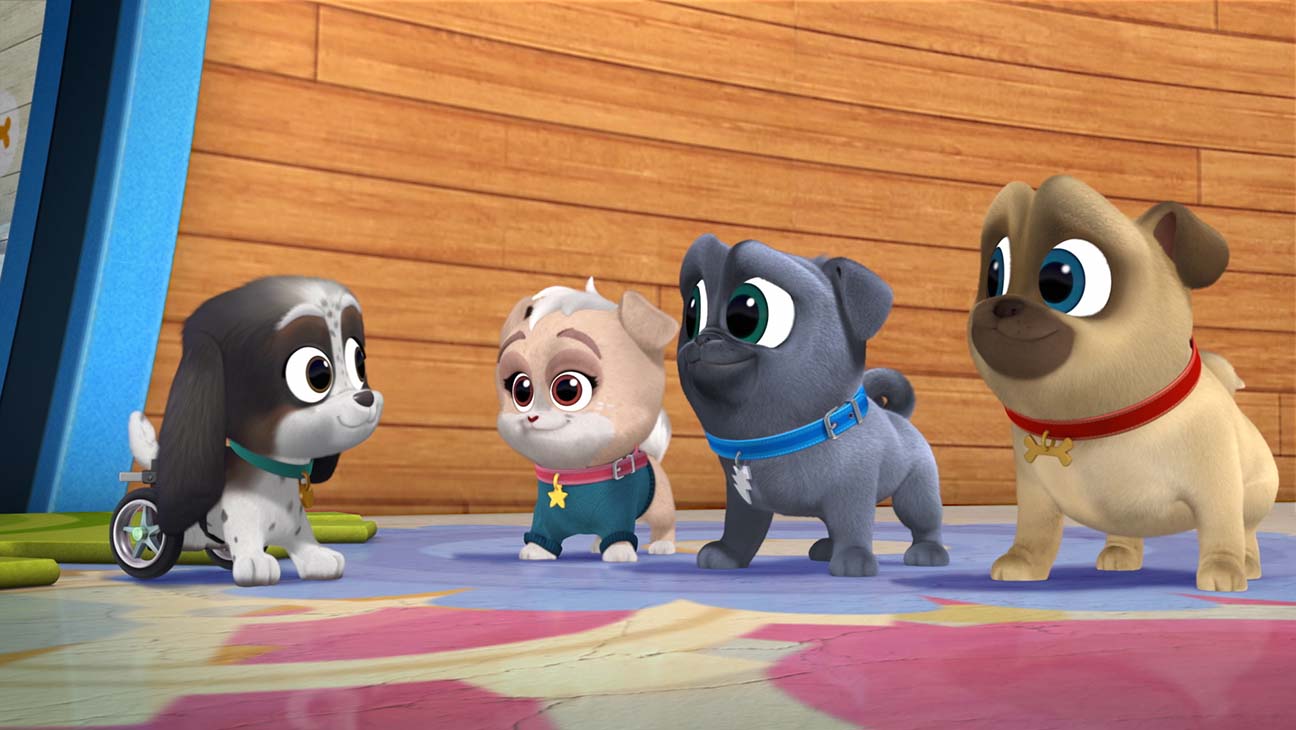 However, before we leave, we have to say goodbye to our pets. And their big, adoring eyes can introduce a lot of guilt when we leave.

Thankfully, a couple of years ago, Disney started allowing pets at some of its resorts. 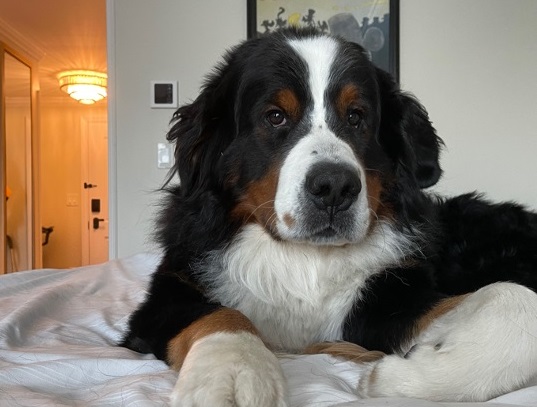 You no longer need to leave your puppy behind when you visit Walt Disney World!

Art of Animation currently allows dogs. You must contact Disney at (407) 939-7539 to notify them that you intend to bring your pet, though.

I presume some additional cleaning practices come into play. 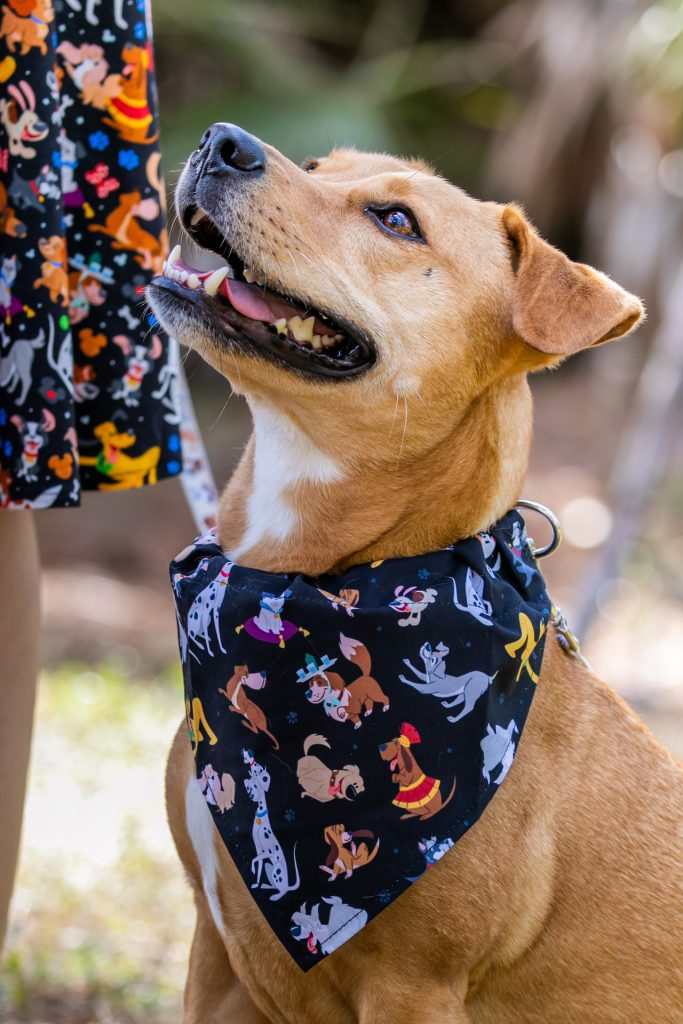 Realistically, you probably want to speak to a cast member to learn more about the program anyway.

Also, you should know that Best Friends Pet Care can take care of your puppy while you’re at the parks. 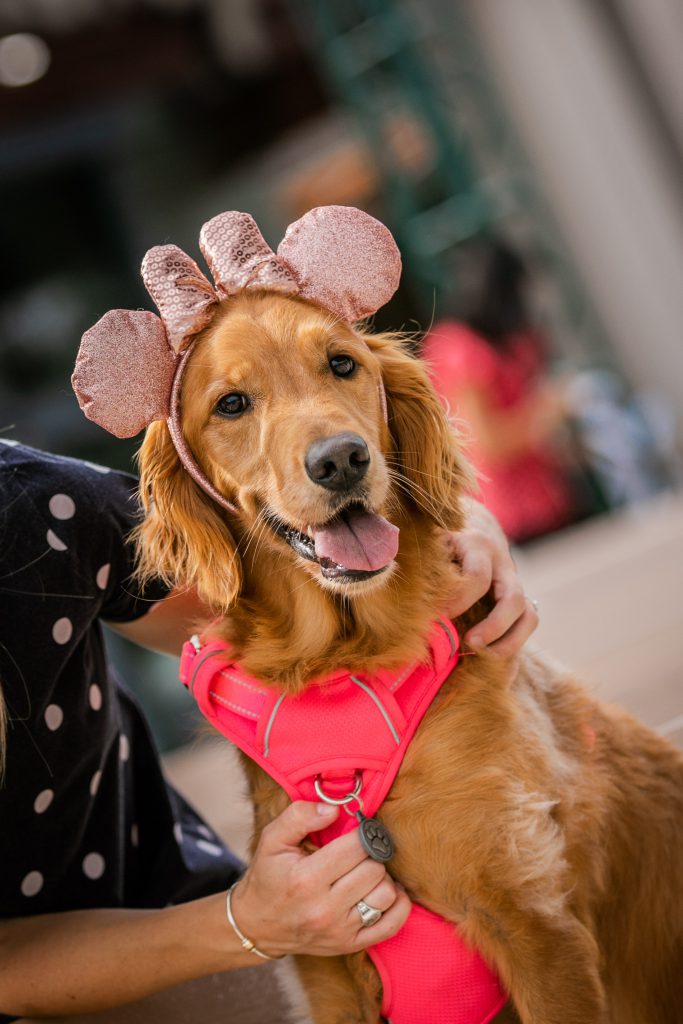 Current rates run from $28 to $43, depending on how long you need doggy daycare.

If you haven’t figured it out by now, Art of Animation caters heavily to families, especially ones with children.

As a way to entertain kids, the main pool area includes the Schoolyard Sprayground.

As the name suggests, it’s a water playground for children…and they’ll love it!

Meanwhile, parents relish this opportunity to lay on a deck chair and relax on vacation for a change.

You’ll be so grateful for the Sprayground when you stay here. It’ll keep you sane.

Of course, the crown jewels of Art of Animation are the family suites. These hotel rooms can sleep up to six guests and possess massive size. 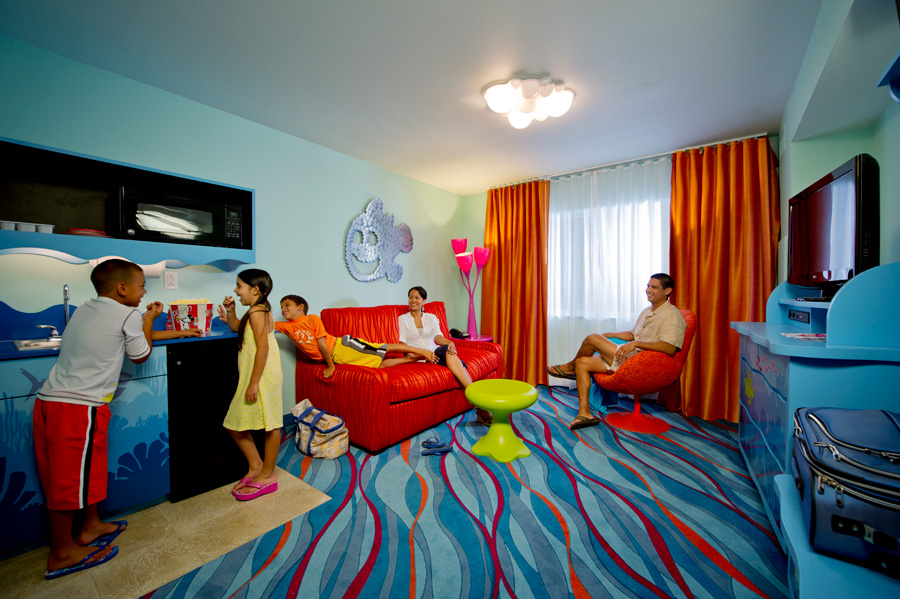 Even better, Disney has themed them to four of your favorite animated movies! 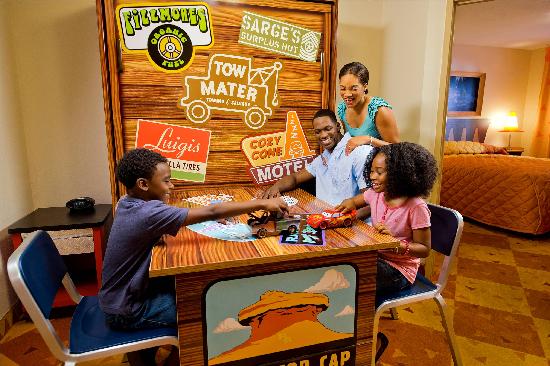 You’ll have your choice of Cars, Finding Nemo, The Lion King, and The Little Mermaid.

These rooms will make your family feel like you’re at Disney all the time, not just when you’re at the parks.

Even better, you’ll have plenty of room to stretch out due to the cavernous size of the family suites! 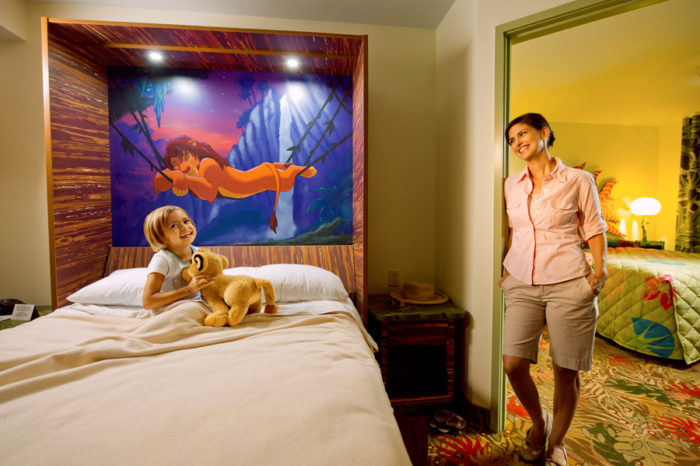