The collector’s piece sports 9 different pins; each commemorating a different facet of the character many years over his incredible run in the world of comics, film, and television. 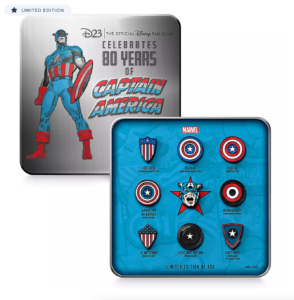 These black nickel pins display 8 different versions of the star-spangled hero’s signature shield, and one pin of the character’s face pulled straight from the comic books.

The pins are offered exclusively D23 Gold, and Gold family members, depict the various iterations of the vibranium shield throughout Captain America’s history. 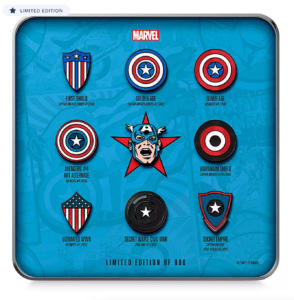 It all starts with the first shield; depicting the badge-like design of the character’s original creation. The pin pops with blue and red stripes that look directly pulled from the pages of a comic book.

The next two shield pins depict the golden and silver age of the comic books; differing in the outer ring of the shield.

The golden age shield, sporting a notable blue ring on the outer part of the shield, with the silver age transitioning to the widely known two red ring design. 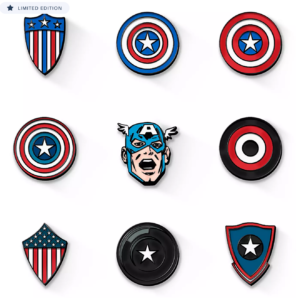 These three original designs are followed by two more shields; the alternate avenger’s design that adds small alterations to the well-known shield, and the stripped vibranium shield design of issue #342, the shield used by the US agent, AKA John Walker. 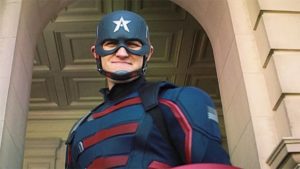 John Walker has just been introduced in the new Disney+ series ‘The Falcon and The Winter Soldier’
Image Credit: Disney+

In between the two shields is the comic accurate Steve Rogers as Captain America yelling pin.

The final three pins display the ultimate iteration of the character’s shield- a reimagining of the badge-like design- and two very well-known, and more contemporary versions of the characters shield; The Civil War arc, and the Secret Empire arc. 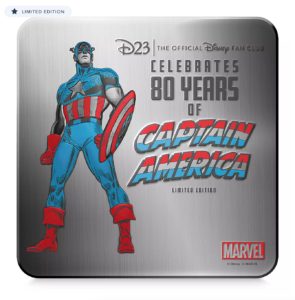 The pins are delivered in a beautifully illustrated, embossed, metal tin with exclusive artwork depicting Captain America. Act now, as the collector’s piece is limited to only 800 units being available!