Two new collectible keys have been released on shopDisney, centering around Forky and Karen Beverly from Toy Story 4.

Ever since the release of the fourth installment into the Toy Story franchise, Forky has been a hit and a beloved addition to the Pixar family. 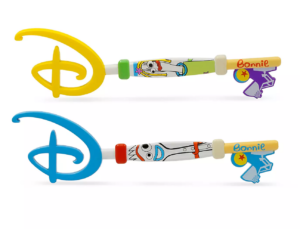 Forky’s key has the sculpted Disney ‘D’ in blue, with red detailing just above the shank, with the shank having Forky’s image on.

Both of the keys have Bonnie’s name written in crayon, with the end of the key being Luxo Jr. and the Luxo ball. Both of these are seen throughout Pixar movies as an ode to their first animated short in 1986 named Luxo Jr.

Karen Beverly’s key has a yellow sculpted Disney ‘D’, with green detailing just above the shank. Both of the color schemes of the keys follow the characters color scheme.

Both keys come in a window display box with a stark red background, so they can be beautifully displayed regardless if you keep them within the box or not. Forky can be seen in the upper left corner, with the Toy Story 4 logo in the upper right. 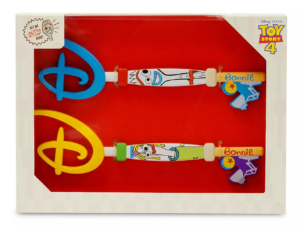 This new collectible can be found online at shopDisney, and total for $19.99 excluding sales tax.

This isn’t the first Toy Story themed collectible key, however, as a special edition Toy Story 4 key was released alongside the premiere of the film in 2019.

The Toy Story 4 edition had Woody’s shirt print on the shank and featured Luxo and Luxo Jr. once again.

Are you a key collector? Will you be adding these to your collection? Let us know in the comments below.