Maul? What Is Ray Park Getting At?

I am late for the party, of course. But the chatter is beginning (again) about a return for Darth Maul in Star Wars.

Those of us who sat through Solo: A Star Wars Story (multiple times), and loved it, aren’t necessarily surprised.

He was moving around at the end of that movie.

He was standing at the end of that series, too.

However, color me surprised that Ray Park might be teasing it.

Then he followed up with:

Of course, one tweet hit the hydro spanner on the head:

So Maul’s line to Qi’ra in Solo was “meet me on dathomir” and that’s also the caption of Ray Park’s latest post… Solo sequel in the works???? pic.twitter.com/CKcm8Lfvoh

Now, all things being equal, it would not shock me that Lucasfilm is looking to expand the Star War universe and include Han Solo and Lando Calrissian therein.

And we already know that a Lando series is coming. And that the Solo 2 movement is strong.

Moreover, with Maul still floating around pre-Rebels, it doesn’t shock me to hear about Maul.

And CBR.com is thinking about how Maul might fit in.

It was also established that he forfeited the “Darth” title and renounced the Sith after realizing he was simply Sidious’ pawn. Instead, Maul became a ruthless crime lord.

Maul would factor heavily into The Clone Wars and Star Wars Rebels, the latter of which saw him encounter Obi-Wan once more, dying in a lightsaber duel. His last live-action appearance, however, was in Solo, which ended with him summoning Qi’ra to Dathomir and left his fate between then and Rebels unclear.

Timeline-wise, Maul would still be alive during the events of Obi-Wan Kenobi, which begins filming this spring. 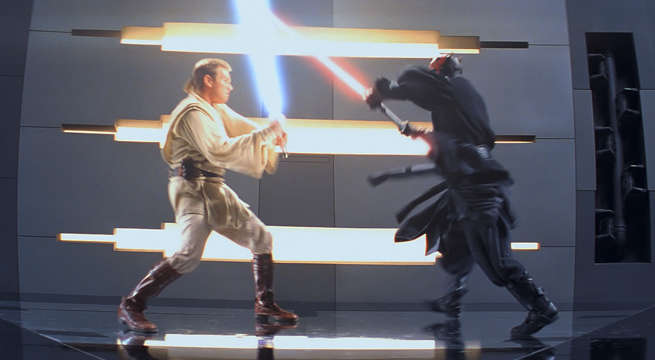 We’ll keep an eye on this would-be story….