Star Wars fans may be in for a unique take on the galaxy far far away as an insider, first reported by WeGotThisCovered, has information on Lucasfilms potential development of a Star Wars comedy. There was limited information other than Lucasfilm’s early work done on the potential next installment for the series.

The news is certainly interesting, as fans haven’t been vocal about their desire for more comedy in their Star Wars films. The heads at Lucasfilm may be executing their best attempt at their own version of the Marvel formula that has made Kevin Fiegi the architect of cinemas’ greatest interconnected film franchise ever.
The president and overseer of all things Marvel, Kevin Fiegi, was tapped by Disney to work his own magic over a struggling Star Wars brand that has, at worst, provides sloppy, divisive, and haphazard installments, and at best, failed to live up to the might Star Wars name so engrained in cinema and pop culture history.

There are two schools of thought with this news. The first harkens to the criticism fans had for the use of Comedy in the Disney Star Wars trilogy. Referred to often as “marvel-esque” it simply didn’t land with audiences the way the filmmakers may have intended.
Coming across often as an attempt to copy the Marvel films’ use of lighthearted moments and comedic emphasis; without first setting in stone the heart and weight of the Marvel films. The ingredient that makes the comedy work.

The second thought is looking at what has been done in The Mandalorian. A Star Wars property that balances the comedy with the adventure and seriousness that can be enjoyed out of Star Wars stories.
What Taika Waititi, John Favreau, and Dave Filoni, were able to do in the final few episodes of the show’s first season clearly establishes the fact that comedy in Star Wars, when done right, works; and works tremendously. 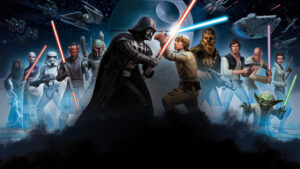 Time will tell if this slapstick Star Wars film comes to fruition. With Rian Johnson’s trilogy still in uncertainty and Fiegi’s next steps as Lucasfilm copilot uncertain, we can only wait and see where Kennedy, Iger, and the people at Lucasfilm choose to aim their focus for the future of the brand.
In the meantime, fans can get their Star Wars fix by catching every film in the franchise, and the two seasons of the beloved Mandalorian series, currently streaming on Disney+. 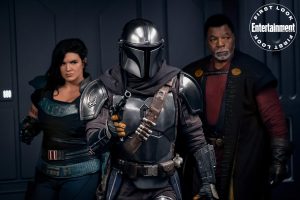