Okay, okay. The Star says peeps in Little Marlow, Bucks, UK are losing it over the producers of Star Wars: Obi-Wan taking over a quarry to film the Disney+ series. Sure, there was a Mr. Braint who expressed some concerns back in November, but there doesn’t seem to be a hubbub about a galaxy far, far away landing near to Little Marlow. At least there’s nothing in recent cache. And, in fact, only one town official seems quoted:

Charles Brocklehurst, the interim head of special projects at Buckinghamshire Council said: “We have had extensive dialogue with residents in recent weeks and have responded in full to the concerns they’ve expressed.

“My take on it is that those concerned are okay with the steps the film company are taking to reduce their impact.

“It’s not the actual film set that has given rise to these concerns but the ancillary facilities in the adjoining field (which is not council owned).” 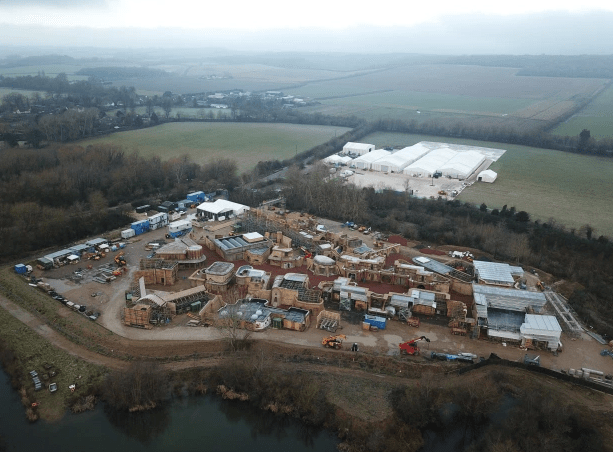 And, my guess is that the town and many of the businesses won’t be too upset to boast their connection to Star Wars down the line. I mean, inclusion in stories like CNN’s “‘Star Wars’ locations that actually exist” won’t hurt the bottom line.

However, I do want to point out that:

We have pictures of a Star Wars television set, purportedly for Obi-Wan! I mean, can we just sit back and enjoy that? Drink it in. And be happy that there is actual Star Wars being filmed?

Meanwhile, remember my mentioning that I thought Liam Neeson was fooling with fans?

Well, look what the man who would be Qui-Gon showed off on “The James Corden” Show:

Doesn’t look like a guy so removed from the world of Star Wars, does it?

Anyway, I think he would look pretty good in blue walking somewhere in Little Marlow. No?

And one more thing. The photos above, supposedly from Obi-Wan – don’t they look like Tatooine. Where exactly is Obi-Wan (if that is what we are seeing)?