Ron Dominguez, Mr. Disneyland, Passes Away at the Age of 85 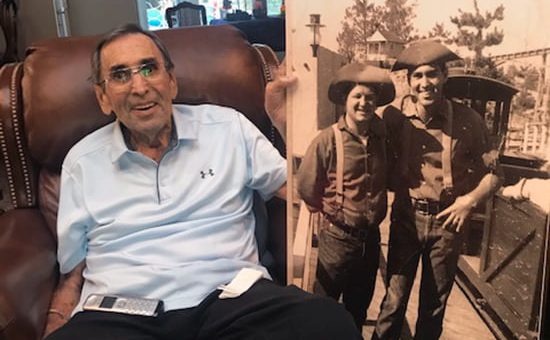 Some sad news came out yesterday, Ron Dominguez, often referred to as Mr. Disneyland, passed away at the age of 85. He was the former Executive Vice President of Disneyland and an original Disneyland cast member. See the announcement below.
“Some sad news to start the new year. The Disneyland Alumni Club has learned that Ron Dominguez, to many known as “Mr. Disneyland, and a former executive Vice President of Disneyland, and a Disney Legend, passed away early today, January 1, 2021. He was 85.
Ron was an original Disneyland Cast Member, even more so than others. His family owned and lived on 10 acres of orange groves that were purchased by Walt Disney for Disneyland in 1954.
According to Ron “Our house was located right about where the entrance to Pirates of the Caribbean and Cafe Orleans are today,”
When his family moved out of their house in August 1954 they had to navigate their way around ditches and holes as construction had started on the park.
Born August 10, 1935, Ron attended Anaheim High School and also attended the University of Arizona, where he studied business administration.
Ron’s first day on the job was July 13, 1955, when the 20-year-old took a summer job as a ticket taker as the park.
He also discovered that Walt had moved his family’s two-story, Spanish-style house behind Main Street U.S.A. and converted it into administrative offices.
A year after he started at Disneyland, he had been trained on every attraction including the Mine Train Through Nature’s Wonderland, and was a member of the Order of the Red Handkerchief, the first Alumni Club at Disneyland dedicated to those worked that attraction which closed in 1977.
Later in 1956, he was named a temporary supervisor of Main Street U.S.A. He moved on to supervisor positions of other areas throughout the park, and in 1970 was made director of operations. In 1974, he became Vice President of Disneyland an in 1990 was named executive Vice President, Walt Disney Attractions for the West Coast.
He was inducted as a Disney Legend in 2000, and has a window on Main Street.
He had been married to his wife, Betty, for 41 years.
Ron retired from Disney in August 1994.
Due to COVID-19, there will probably only be a small family service.
— Written by Mark Eades”

Our thoughts and prayers are with his friends and family.