The pandemic has undeniably changed the dynamics of a Disney vacation.

Some of the hotspots from previous years have gone cold in 2020. 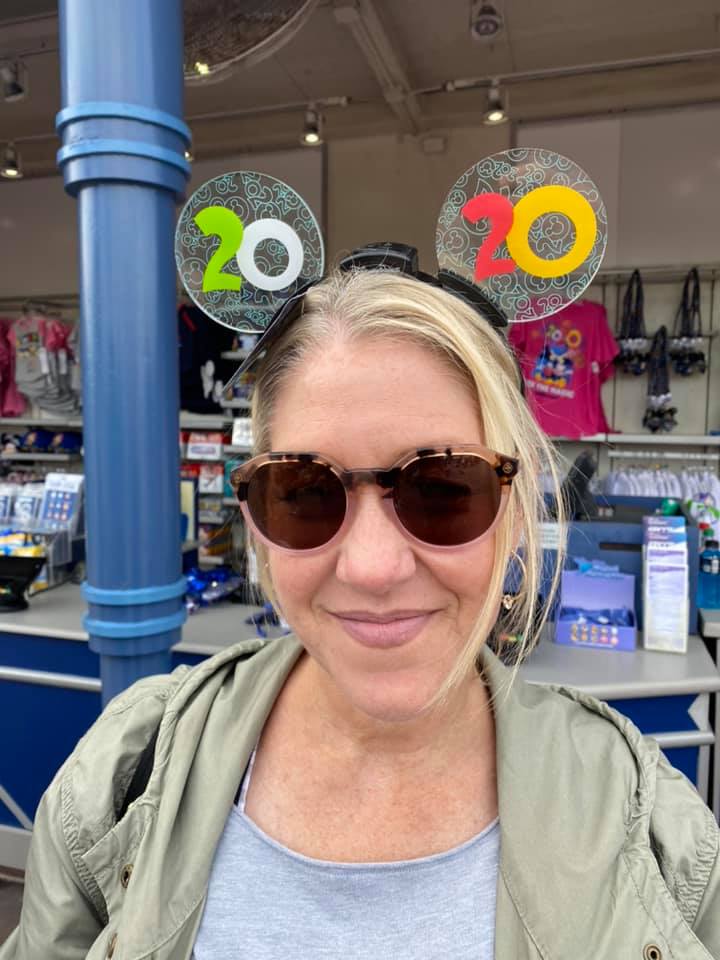 For example, we recently dined at one of the most popular Quick Service restaurants on the Resort Monorail line. And it was empty.

Here’s my review of Gasparilla Island Grill, the hidden gem that everyone has apparently forgotten. 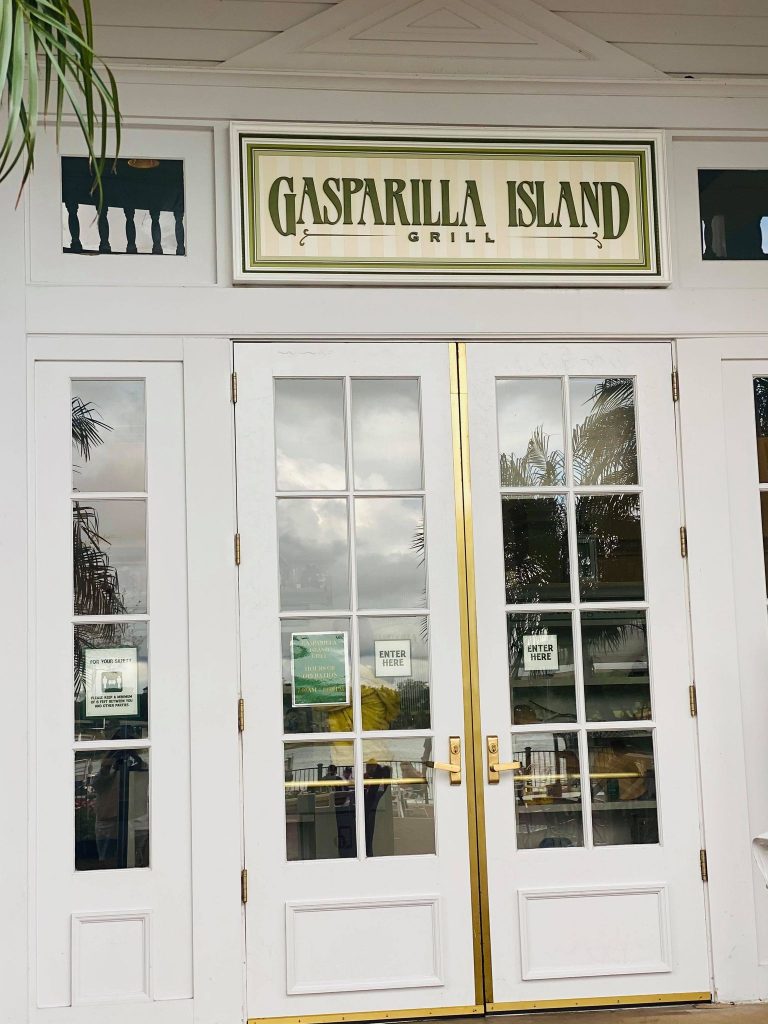 I’m going to make an embarrassing confession here, though. For whatever reason, I can never find the place from inside the lobby.

I eat at Grand Floridian Café nearly every Disney trip, and I know that Gasparilla Island Grill resides quite close to it.

However, I’m the moron who must exit the building and wander around the exterior until I find it. 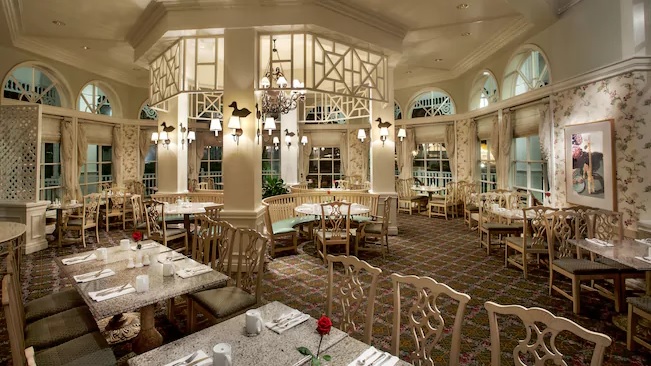 I’m confident there’s a better way, but I spend almost all my time at the Grand Floridian in the hotel lobby and accompanying eateries. So, I’ve never found it.

The restaurant enjoys an idyllic location, as its outside patio dining overlooks the nearby boat dock. 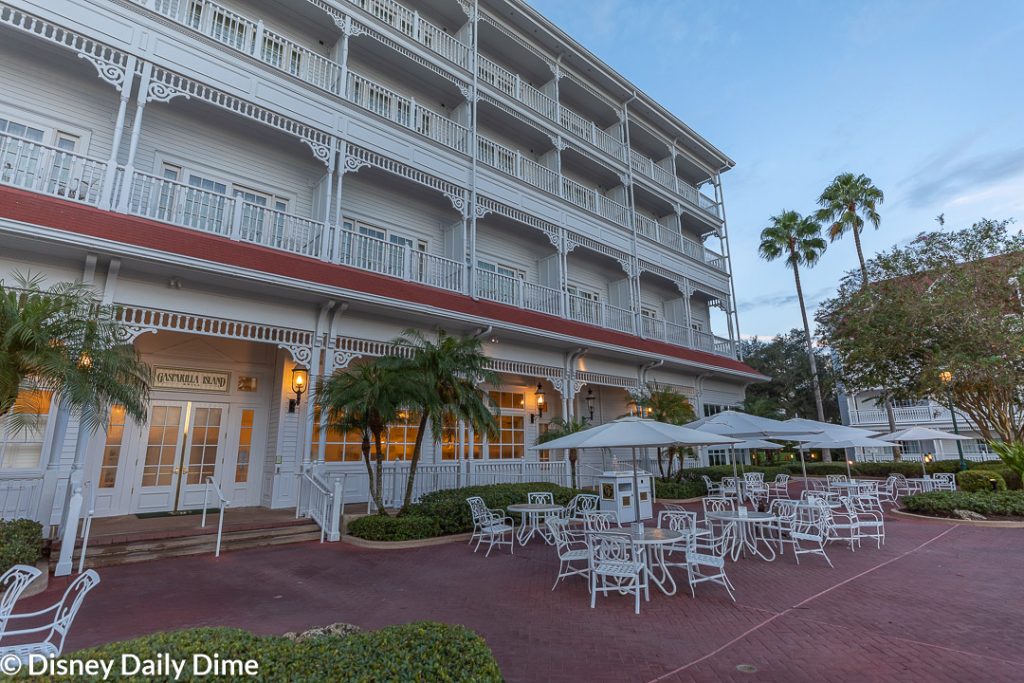 You can dine outside and bask in the sun while evaluating the various boats parked at the dock. This backdrop enhances the island theming in the name. 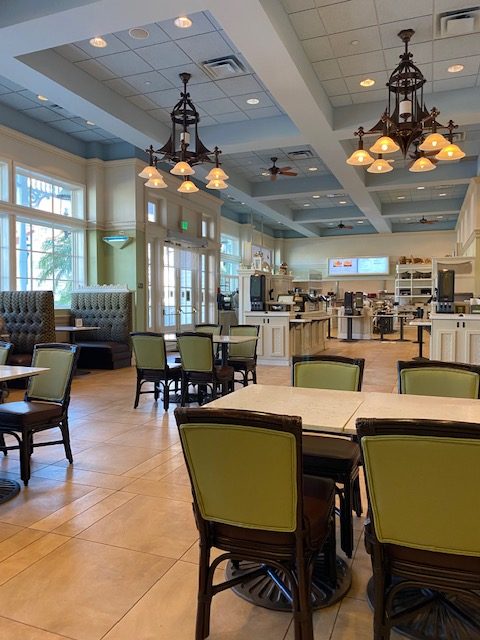 On this day, we knew we were going to dine inside. Florida weather was acting temperamental, as it’s wont to do.

We weren’t in the mood to get rained on. So, we risked the perils of dining indoors during the pandemic, knowing that Disney’s made everything safe.

Like most (maybe all?) Disney restaurants right now, Gasparilla Island Grill won’t even let you in the door until you’ve placed a Mobile Order.

We knew this before we ever reached the hotel, and so we used Mobile Ordering on the monorail. 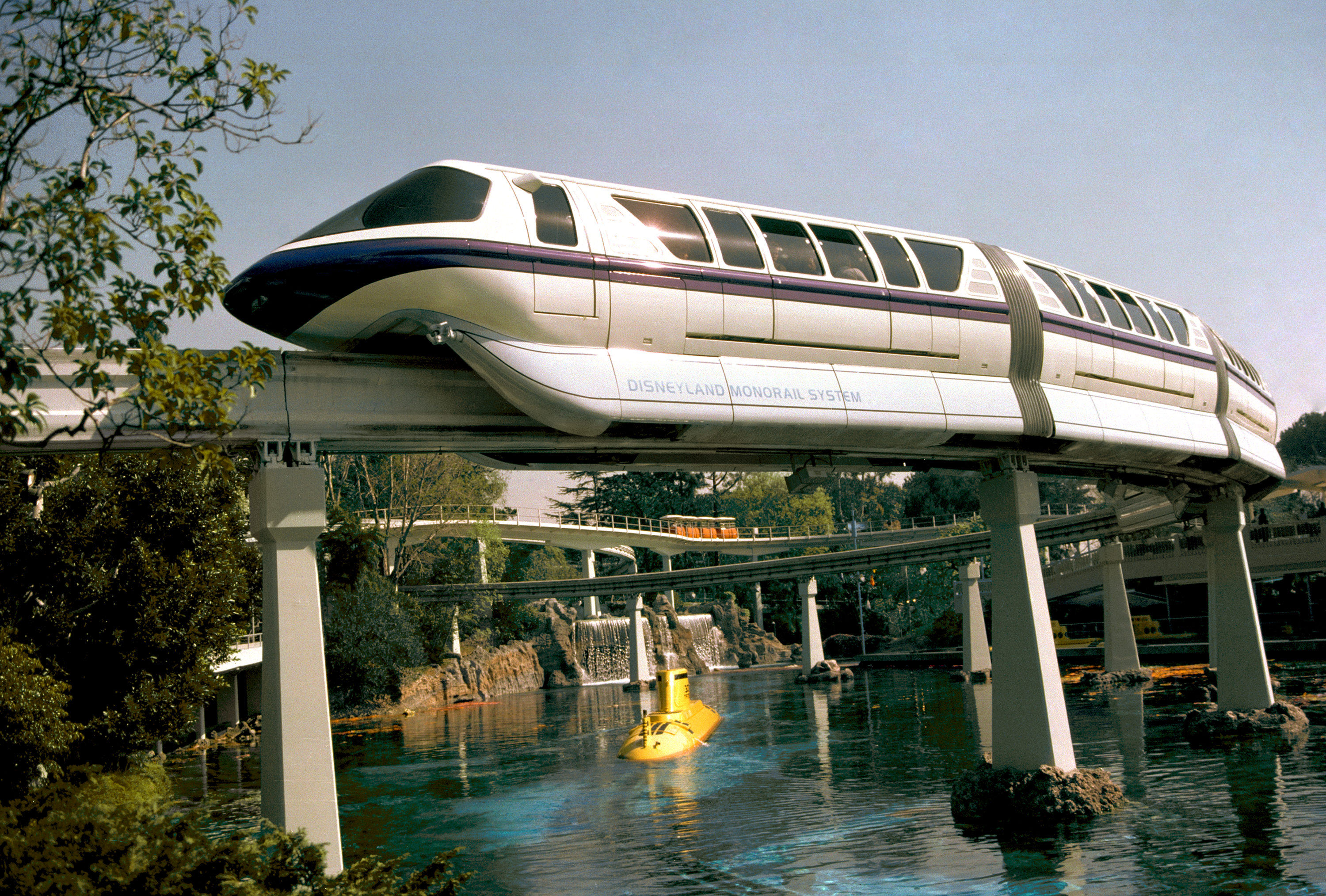 However, you should still know about this process. I watched a cast member at a different restaurant literally block the door and prevent guests from entering.

I didn’t have the heart to tell her that pushing her body against someone else’s defeats the purpose of having pandemic measures in place.

Anyway, your Mobile Order will grant you access to the restaurant. You must show that your order is ready, though.

Mobile Orders occur in three phases, and you’ll spend the longest time on the middle screen on your phone.

This one tells you that Disney has your order, but the food’s not ready yet. It’s agony staring at this screen and begging it to change to the third phase.

Once your order is up, you show it to the cast member working the door, and they let you inside. 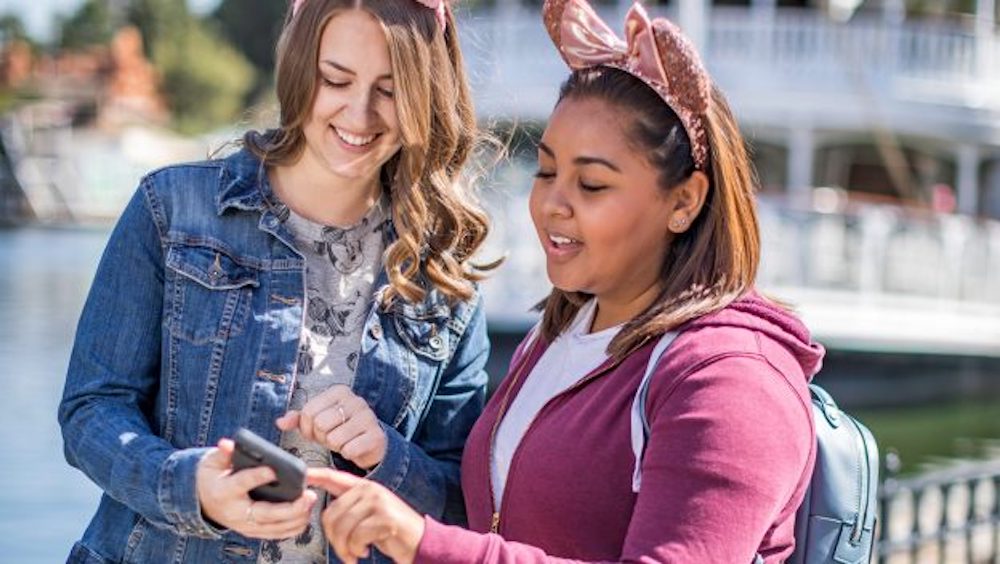 The idea here involves protecting restaurants from overcrowding, but it seemed ridiculous when we entered Gasparilla Island Grill.

This building encompasses a lot of space, but there was only one other family dining…at lunchtime. 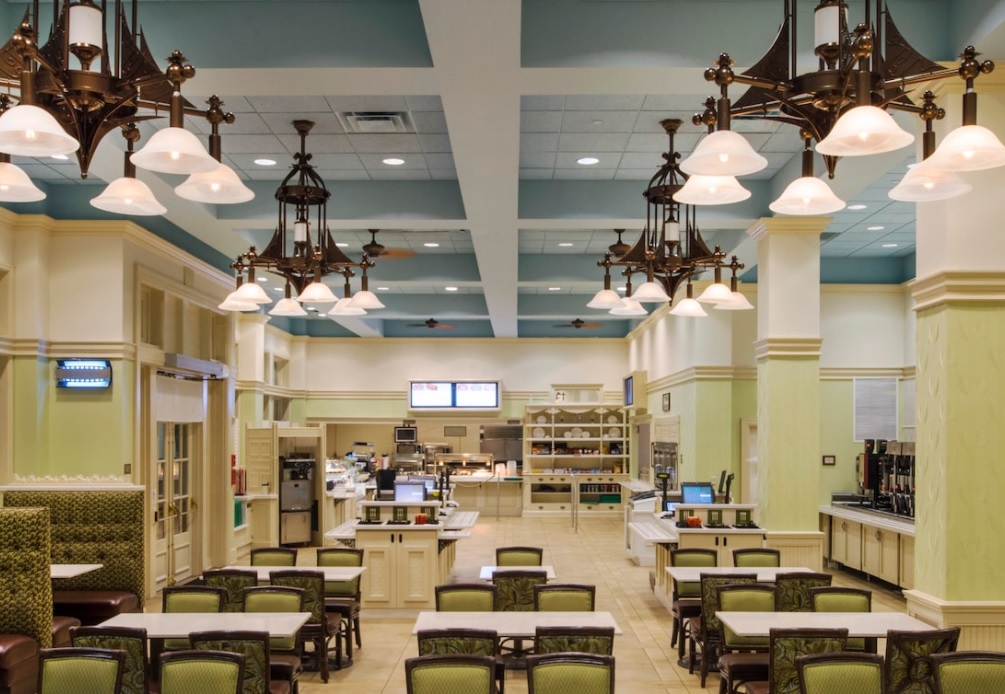 I still want to give the workers and Disney a great deal of credit. When we entered, we couldn’t help but feel impressed by the setup. 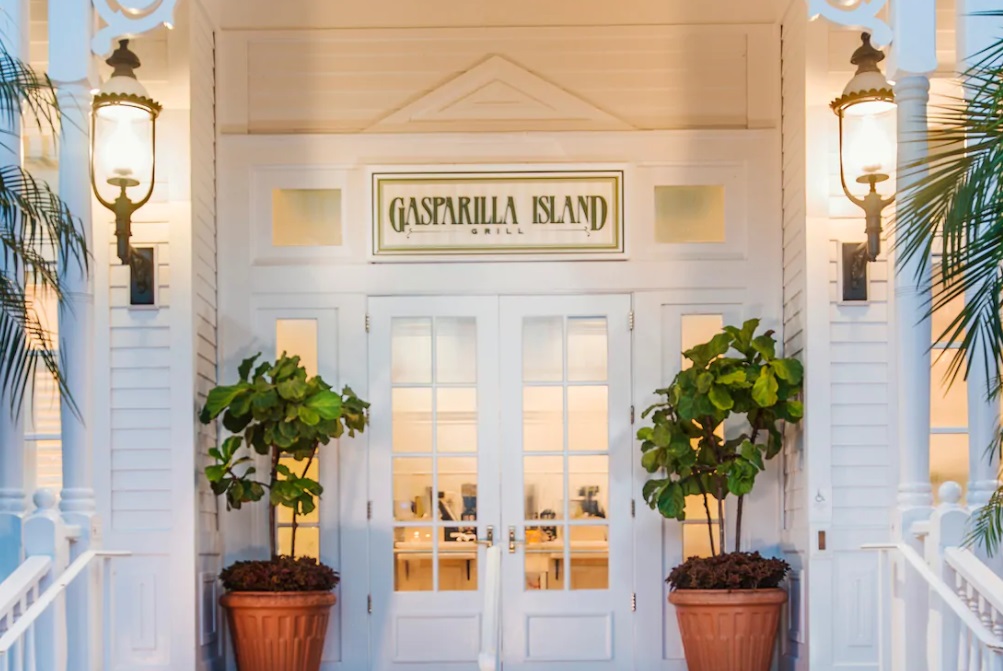 The staff had separated into various stations. We knew where to pick up our order, who to ask for a drink, and how to grab napkins and utensils.

We were sure about all this because the workers at the stations carefully guided us through the process.

There was military precision on display at Gasparilla Island Grill this day.

Our meal wasn’t quite ready when we arrived. So, a cast member pushed us to pick up our drinks.

Afterward, the next person told us we should stock up on napkins and ketchup while waiting. 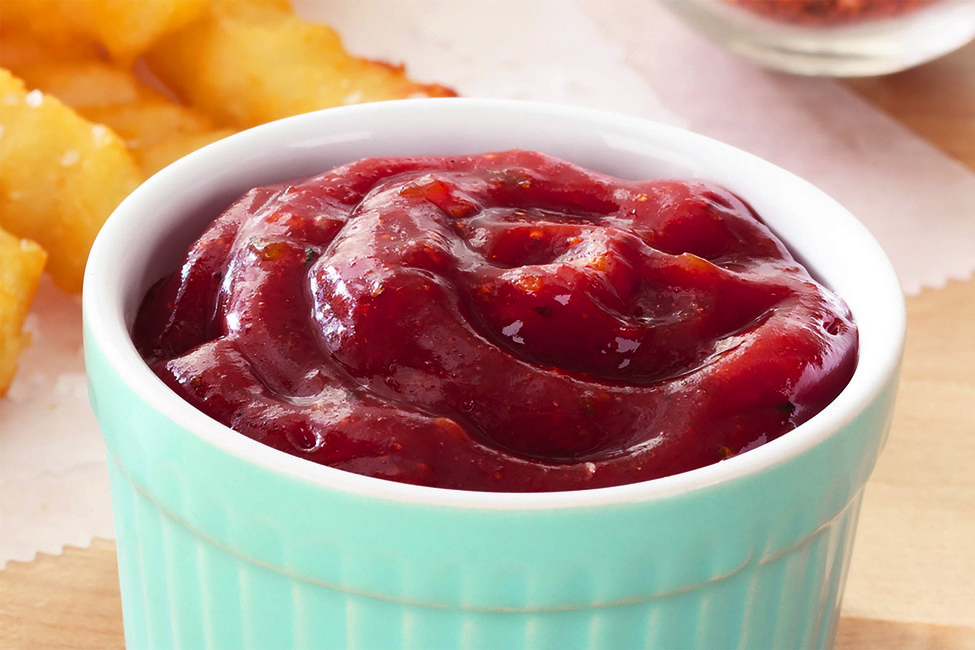 I felt like the child of controlling parents or maybe a puppet on a string. It wasn’t a negative experience in the least, though.

Nobody allowed for questions here. The restaurant had crafted an efficient process, and they embraced it fully.

I was given no opportunity to disrupt, which I found refreshing after a hectic morning at Magic Kingdom. 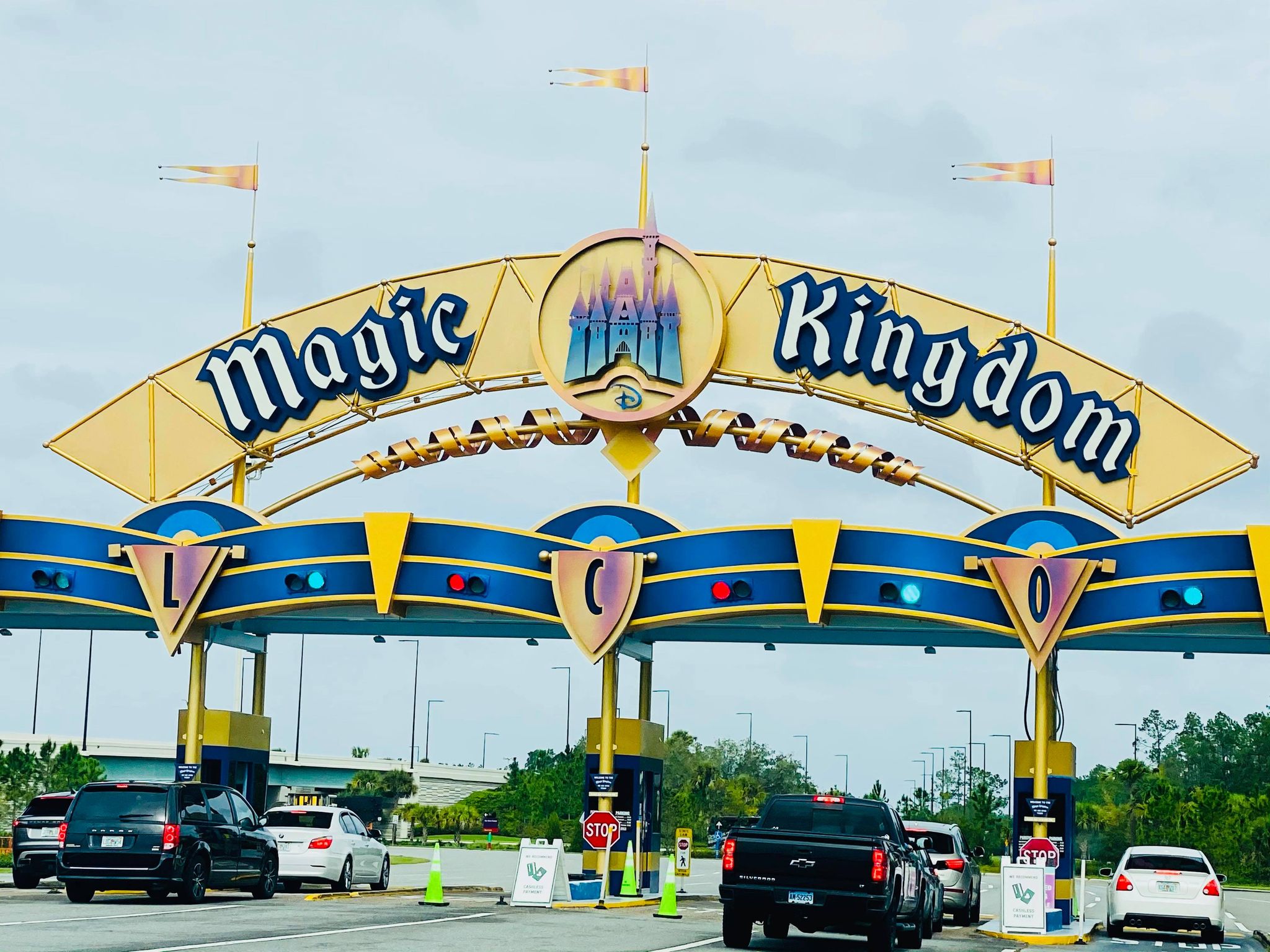 While I waited, the cast member in charge even clarified drink refill policies. There was no downtime or unwasted motion here. I was impressed.

We kept it simple for our final lunch at Walt Disney World this trip. 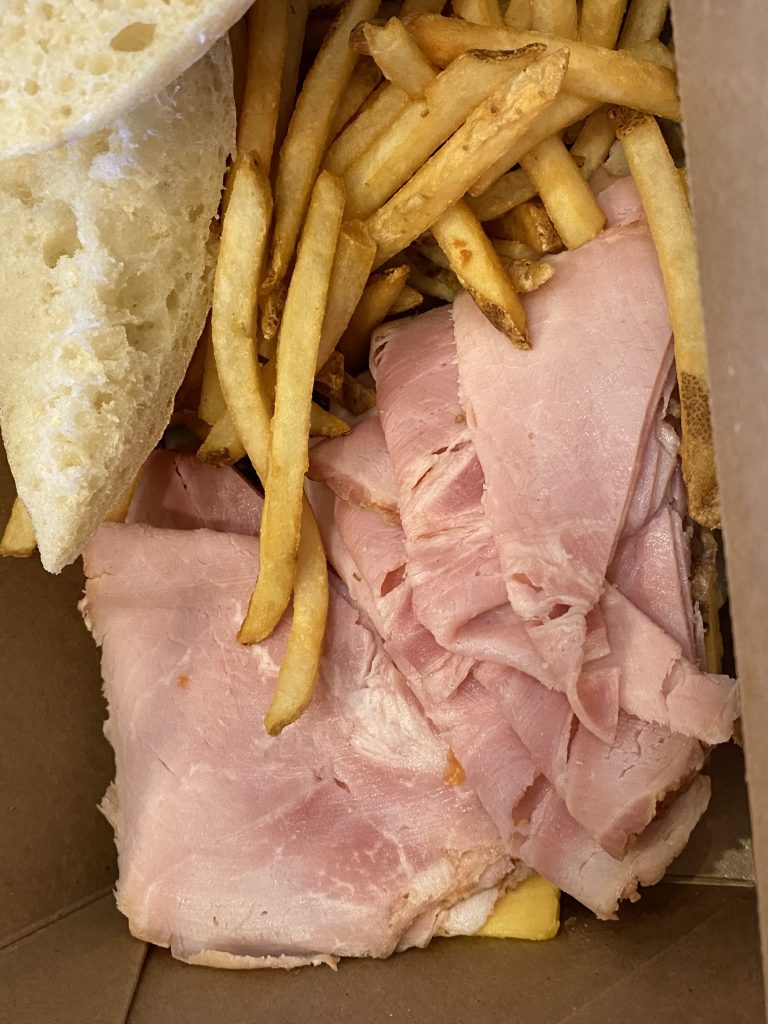 I ordered the Smoked Ham Sandwich, as I had tired of burgers, steak, and pork by this point.

As you can see from the pictures, the ham looked delectable and fresh, and the bun’s crispness gave me a satisfying crunch with each bite. 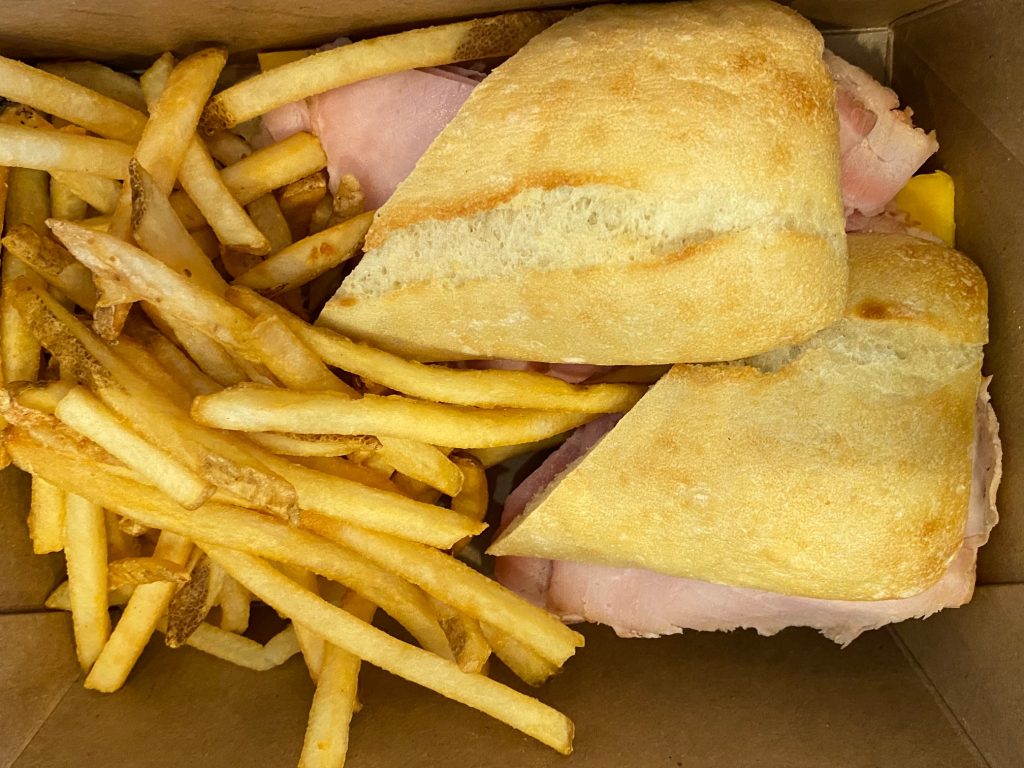 The cheddar cheese on this sandwich stood out as memorably flavorful. Sometimes, cheese can get lost in the ham and bread if it’s not powerful enough. 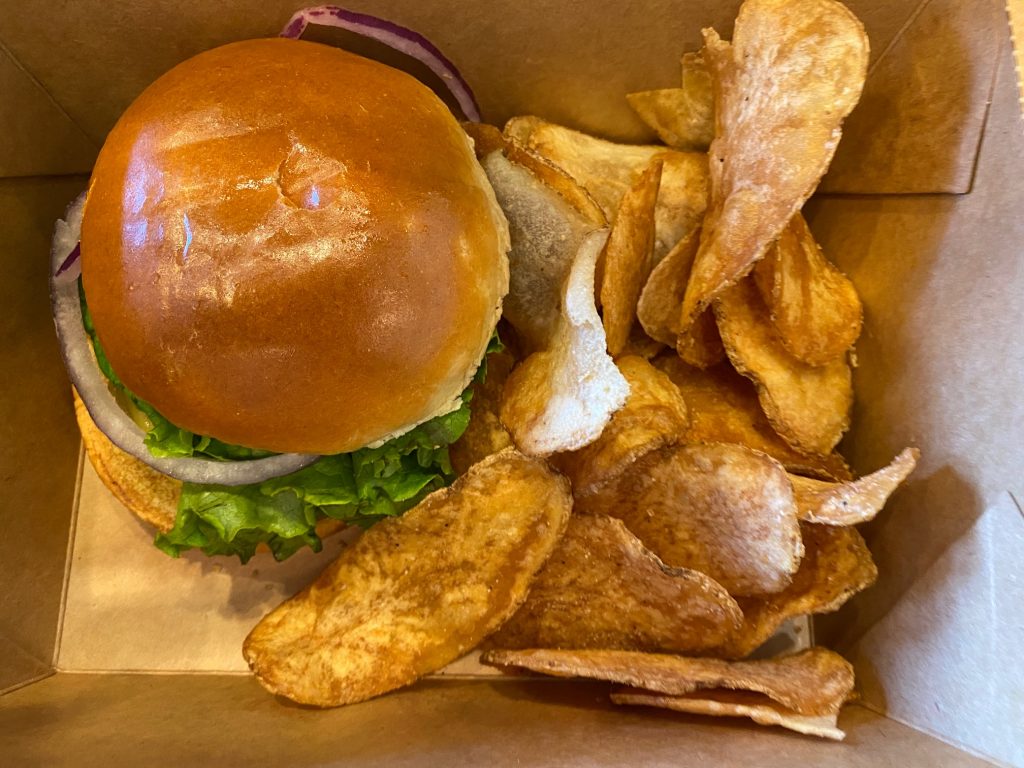 My wife ordered what I believe was her only Impossible Burger on this trip. She enjoyed her dish substantially more than I did. 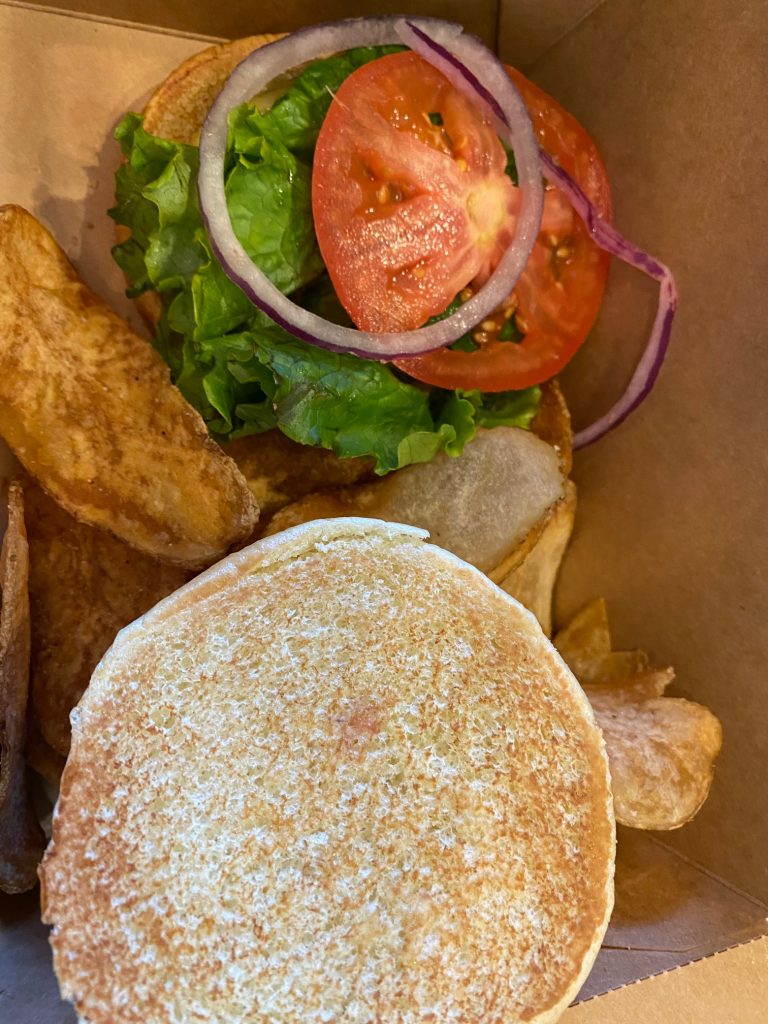 In fact, she later identified it as one of her best meals on the trip, which is especially great since it was possibly the cheapest. 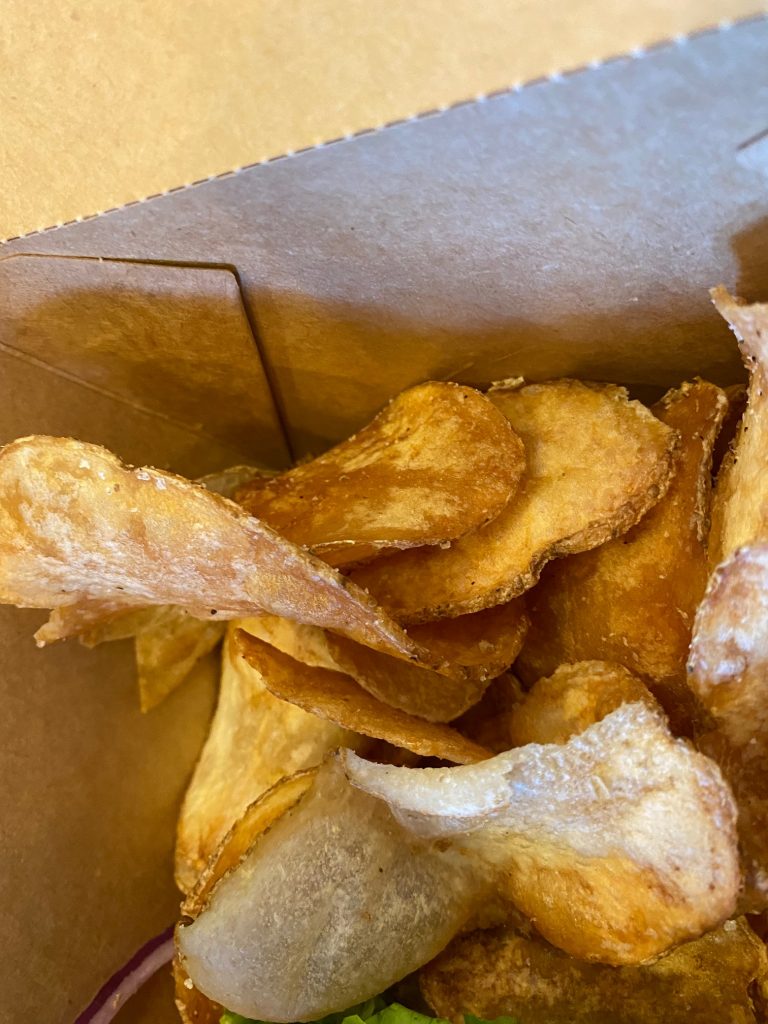 She especially loved the homemade chips that Gasparilla Island Grill serves, as they deliver an unexpected punch.

Entrees, drinks, and desserts cost about $38 in total. It’s challenging to match that price at Disney these days. 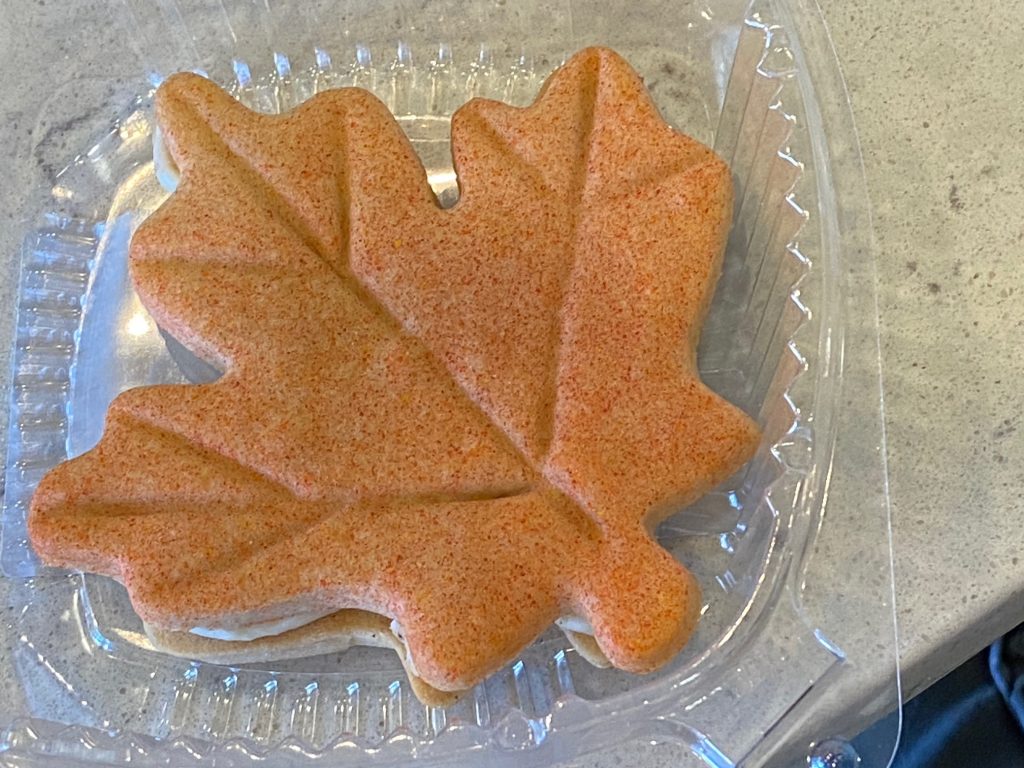 We went a bit silly with our dessert. Gasparilla Island Grill has earned a reputation for having novelty sweets.

In fact, as I type this, you can buy a full gingerbread house here!

We noticed something visually interesting, a Maple Leaf Cookie Sandwich. 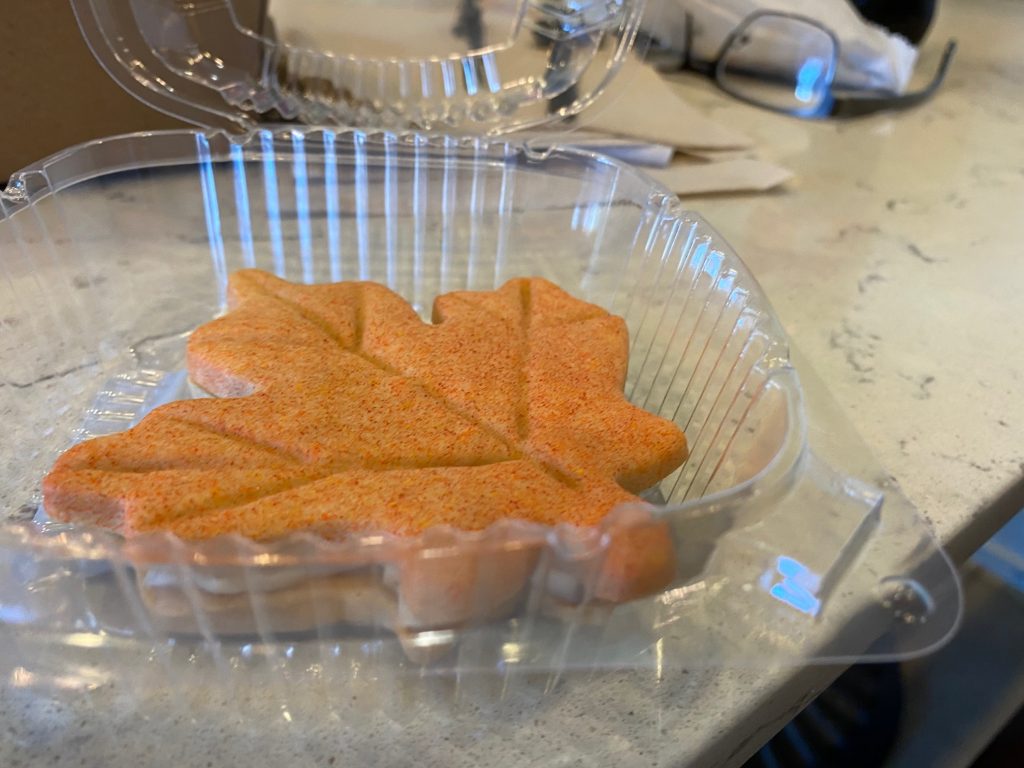 However, the mix of maple with icing really dazzled me. This is a good dessert.

What I’ll always remember from this particular visit had little to do with the food. 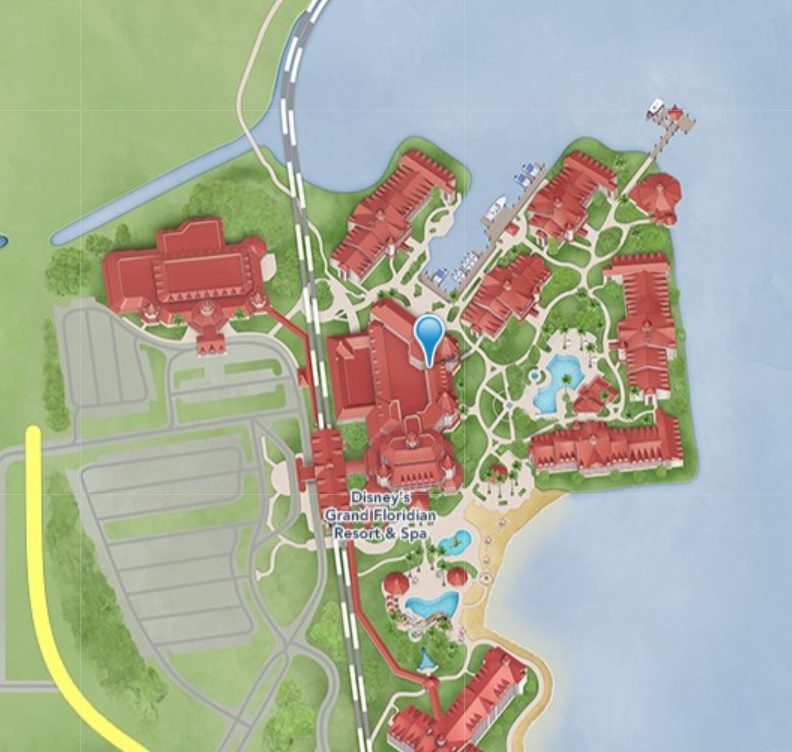 A few minutes after we sat down, the other party left. For about 15 minutes, we had Gasparilla Island Grill to ourselves.

I would never have thought such a thing was possible. The Grand Floridian is usually humming with business throughout the day. 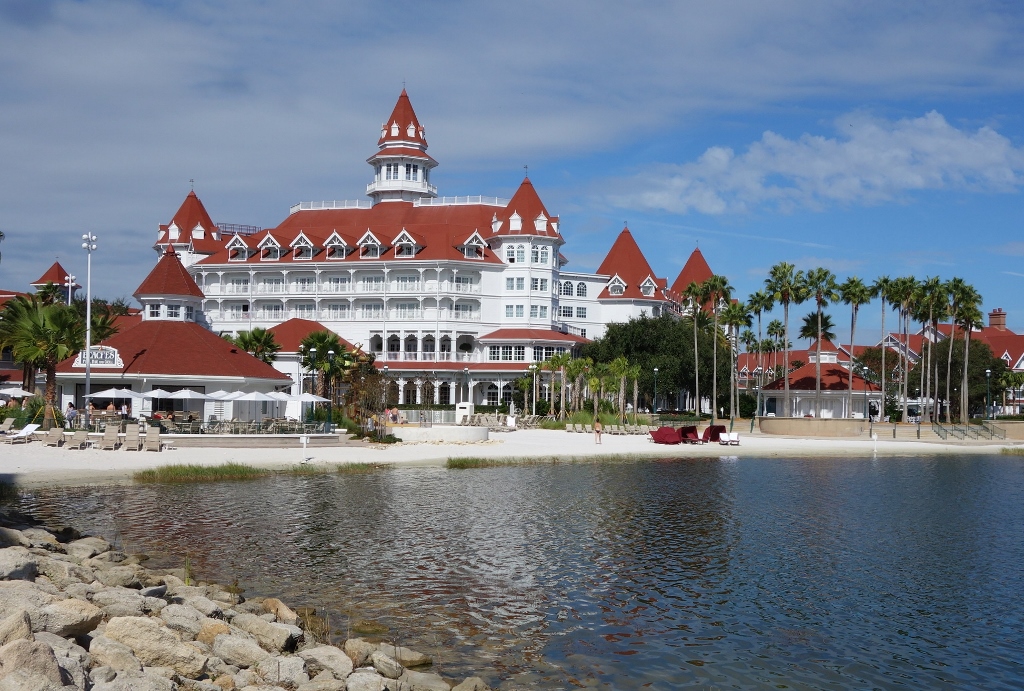 A half-empty restaurant always feels like a win. A completely empty one provides a magical Disney moment.

My wife and I happily sat at our table and filtered through our extremely well-packaged meal. 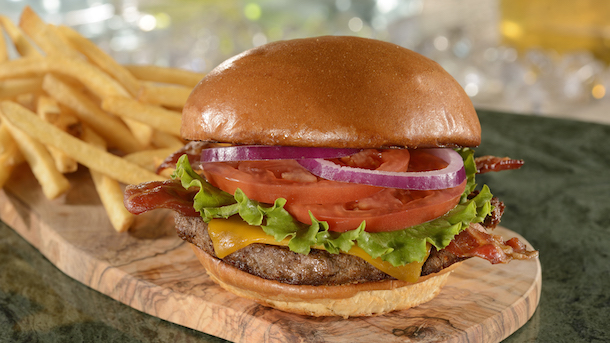 In terms of infrastructure, Gasparilla Island Grill surpassed every other place we visited at Disney this trip…and maybe ever.

These cast members collectively demonstrated the kind of grace under pressure that defines Disney customer service.

They brought order from chaos and allowed us to savor a tasty meal in an idyllic setting. 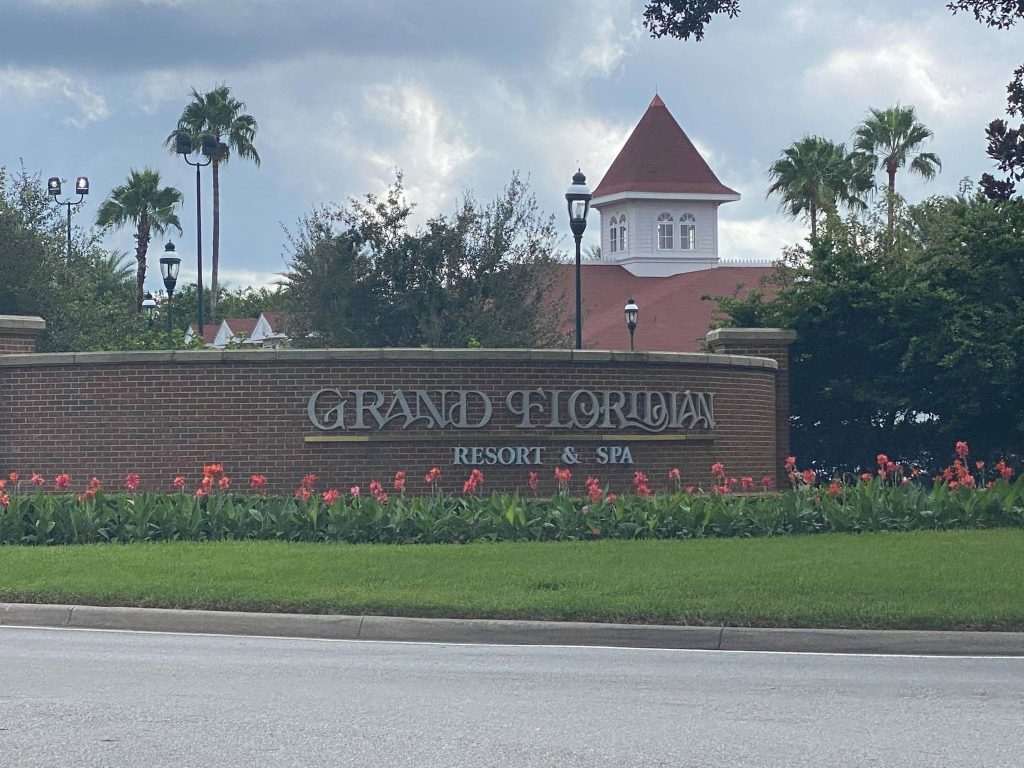 I strongly suspect this will be one of my fondest memories from the pandemic and strongly endorse Gasparilla Island Grill for your next visit.