10 LEGO Sets Perfect For The Star Wars Fans In Your Family!

For those already starting to do your Christmas shopping we’ve got a handy gift guide that is perfect for the Star Wars fan in your family.  We’ve rustled up a handful of awesome Star Wars LEGO sets that would look perfect under the tree. 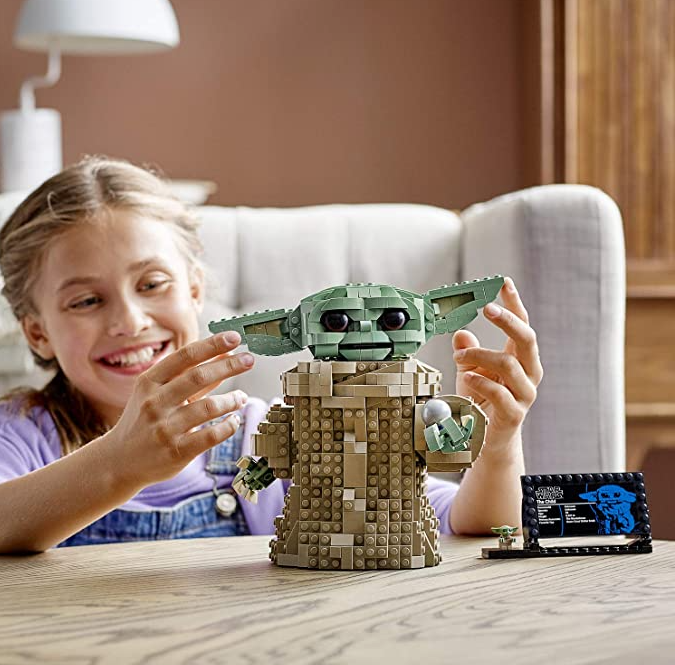 Build your own charming brick-built model of The Child from Star Wars: The Mandalorian that captures all of the cute features of the hugely popular little character.  It features a posable head, movable ears and an adjustable mouth to make different expressions.  The set set also includes a gearshift knob element which can be place in The Child’s hand along with an information sign and the Child LEGO minifigure.  The set is made up of 1,073 pieces. 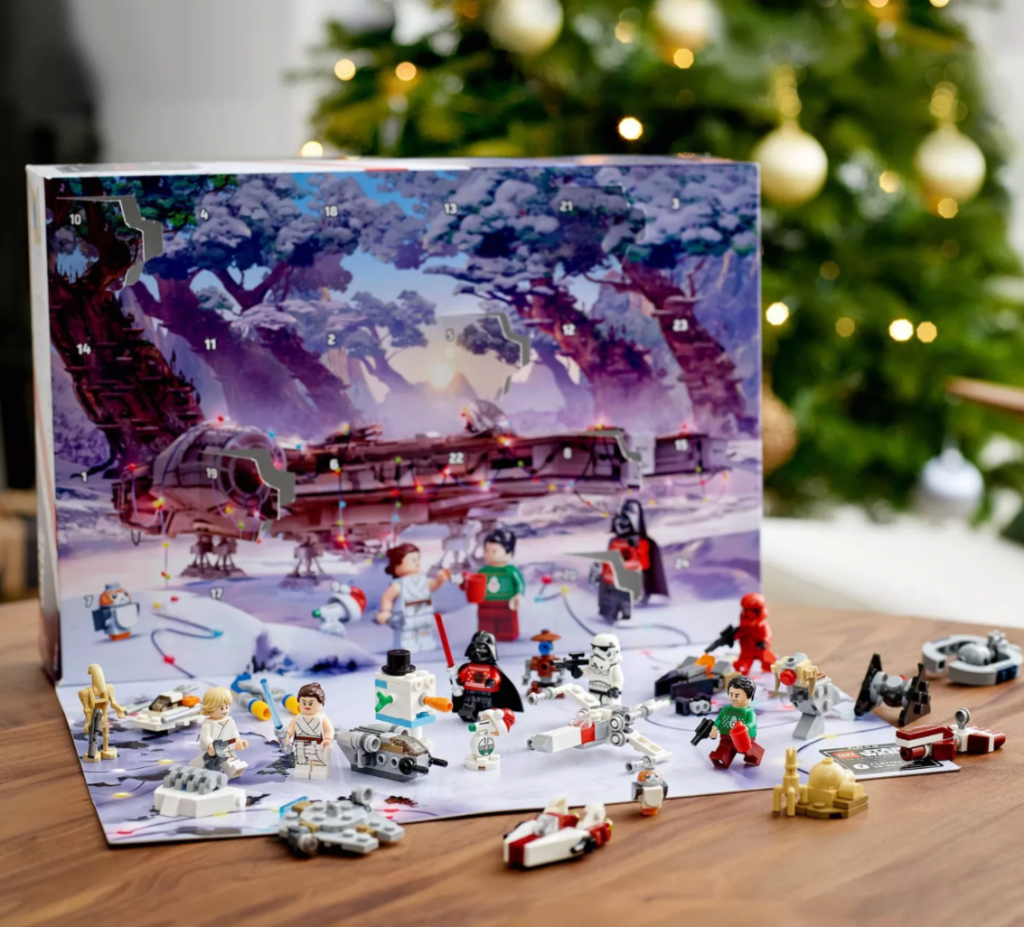 Kids can wake up to a gift every day in the run-up to Christmas with the 2020 LEGO Star Wars Advent Calendar (75279) holiday building set. Behind each of the 24 doors is a Star Wars LEGO minifigure, LEGO figure, buildable starship, vehicle or location. There are 6 LEGO minifigures and 6 LEGO figures to discover, such as Darth Vader with Christmas sweater decoration and D-O with a festive hat, plus a foldout playmat with an image of the Millennium Falcon with Christmas lights to inspire creative play. The 12 mini builds in this holiday calendar include Anakin’s Podracer, a Republic Cruiser and Darth Vader’s Castle. Since 1999, the LEGO Group has been recreating iconic starships, vehicles, locations and characters from the legendary Star Wars universe. LEGO Star Wars building toys are hugely popular, with fun Christmas gift ideas for kids and fans of all ages.

This advent calendar is currently on sale at Target for $37.49 and you can get it here. 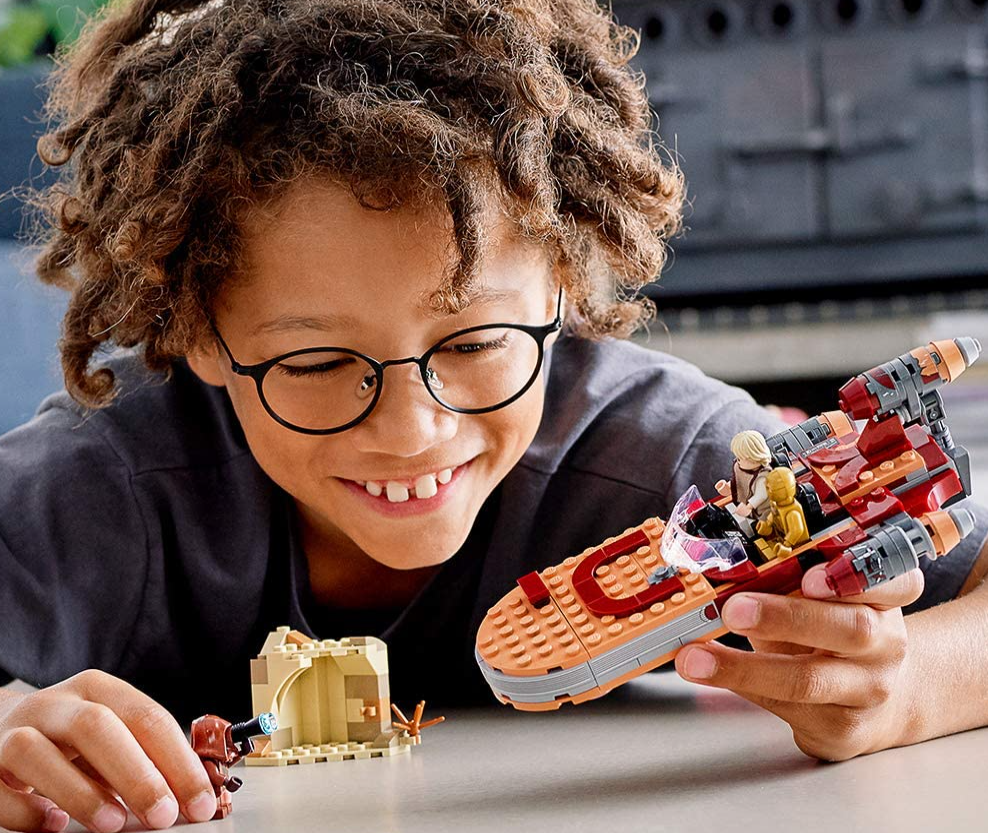 Your young Jedi will enjoy hours of role-play as Luke Skywalker driving this new set.  It features a Xj-34 landspeeder with lots of details including a trunk for the macrobinoculars. It comes with three mini-figures including: Luke Skywalker, C-3PO and a Jawa.

This set is currently available at Amazon and retails for $29.95. Get yours here. 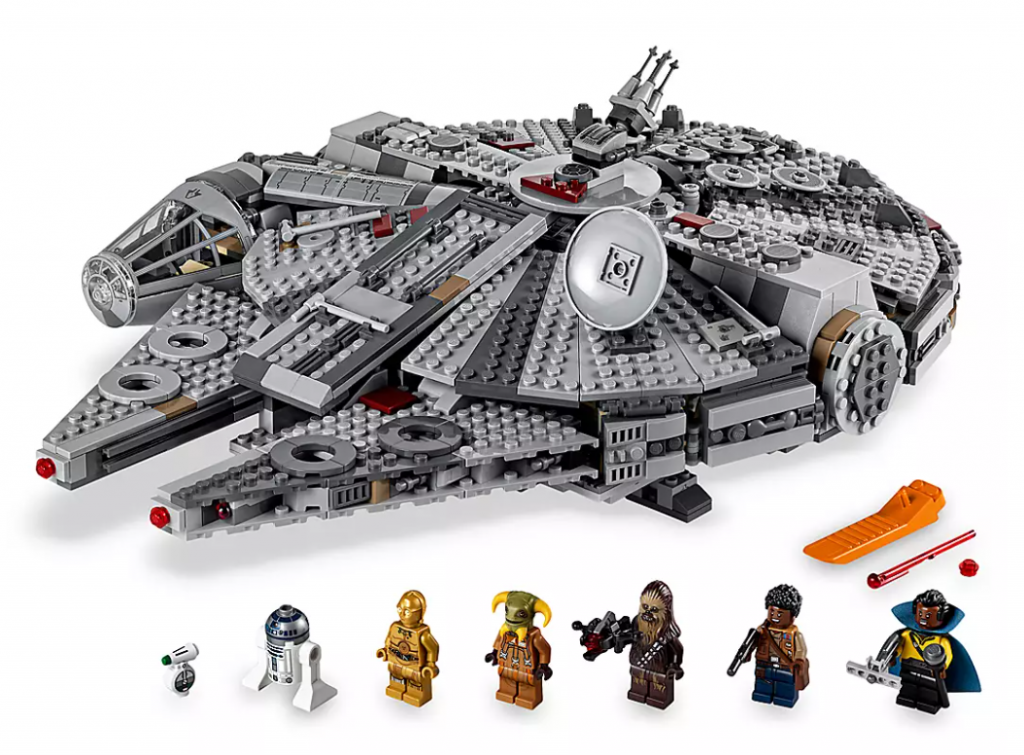 Assemble the iconic Millennium Falcon with this epic Star Wars LEGO playset. Inspired by Episode IX, The Rise of Skywalker, this iconic Corellian freighter starship features an array of details, like rotating gun turrets, spring-loaded shooters, a lowering ramp and seven figures including Chewbacca and Finn. There are 1,351 pieces in this incredible set. 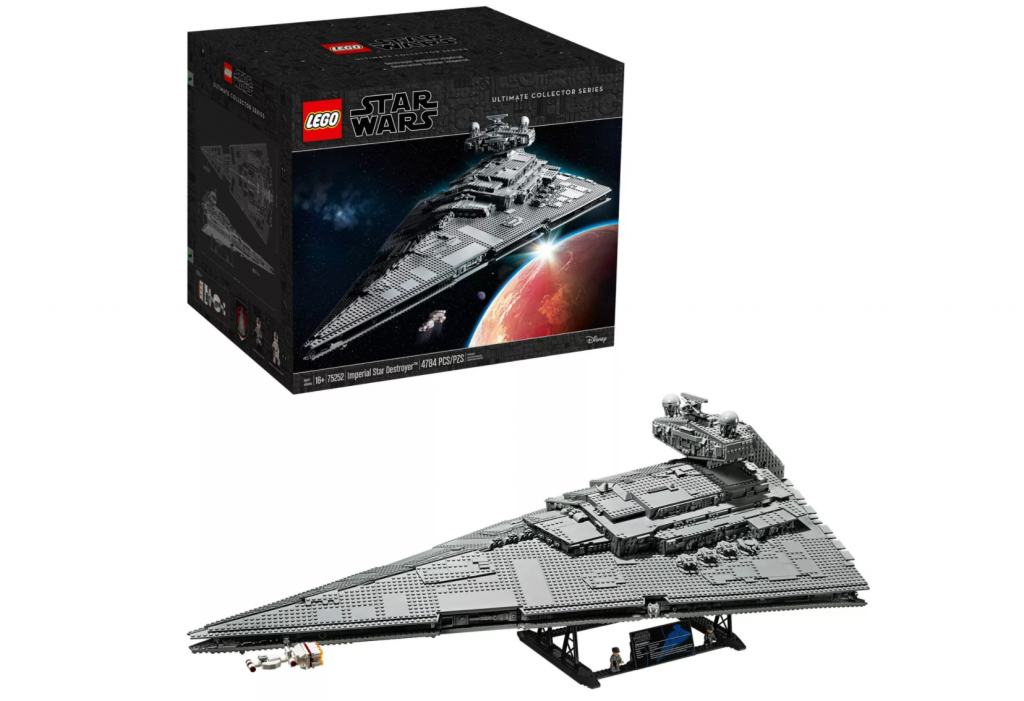 Really looking to splash out this holiday season?  You can order this ultimate collectors set here for $699.95 at Target here. 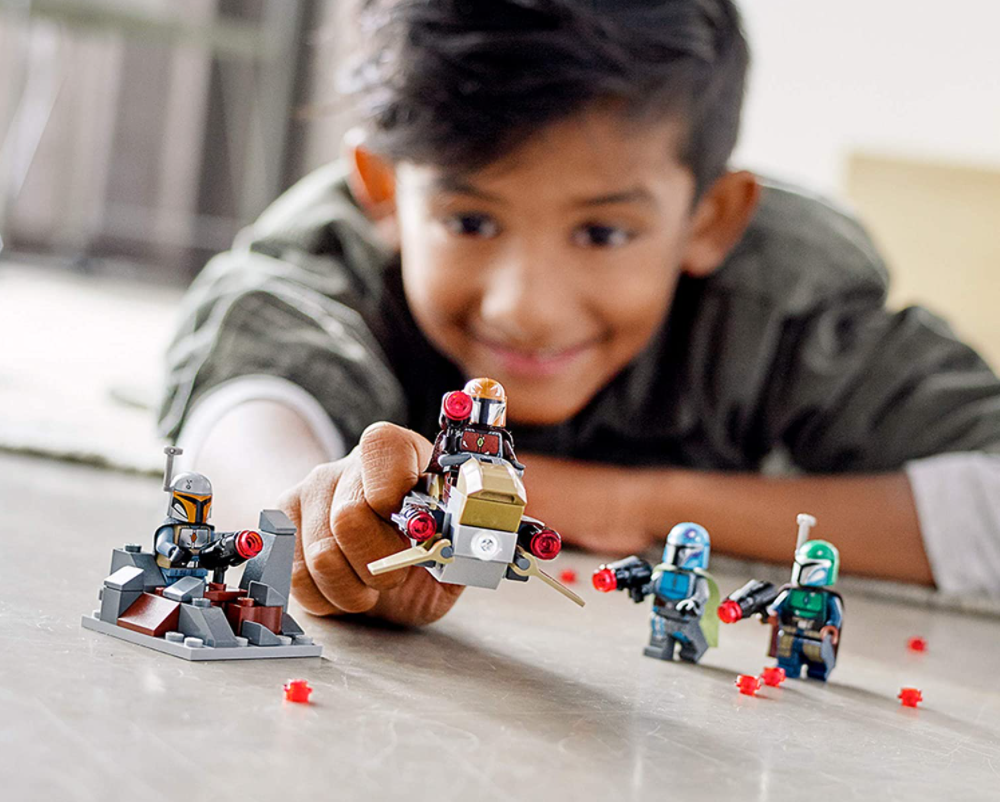 Order up this awesome Mando set here on Amazon for $13.47. 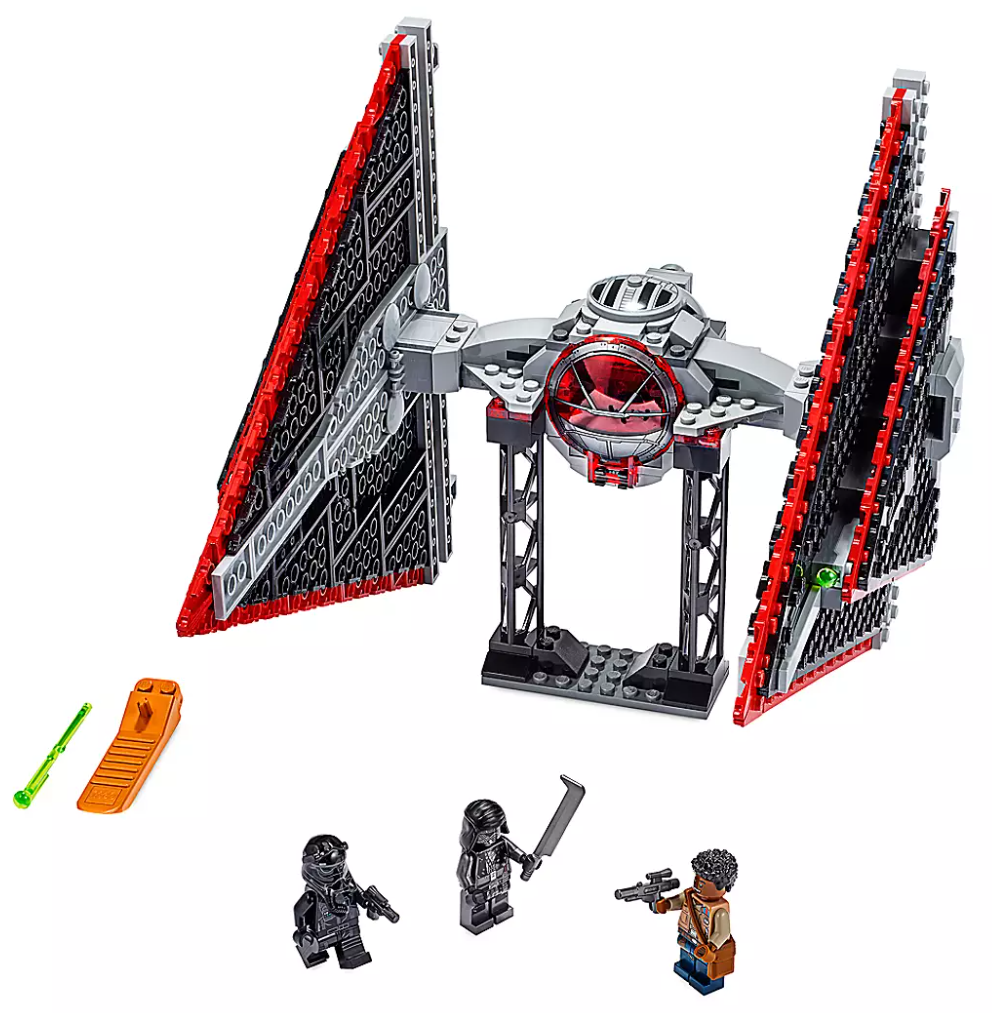 Launch a First Order mission with this super-fast Sith TIE Fighter! Prepare the starfighter at the docking tower. Leap into the cockpit and fly into battle. Hit top speed and fire the spring-loaded shooters! And the action doesn’t stop when you land. Can Resistance hero Finn blast his way to victory or will the dark side triumph? It’s up to you! The set includes 470 pieces, three LEGO minifigures (TIE Pilot) Knight of Ren) and Finn. It comes with two-spring-loaded missiles and an open cockpit with space for a minifigure. 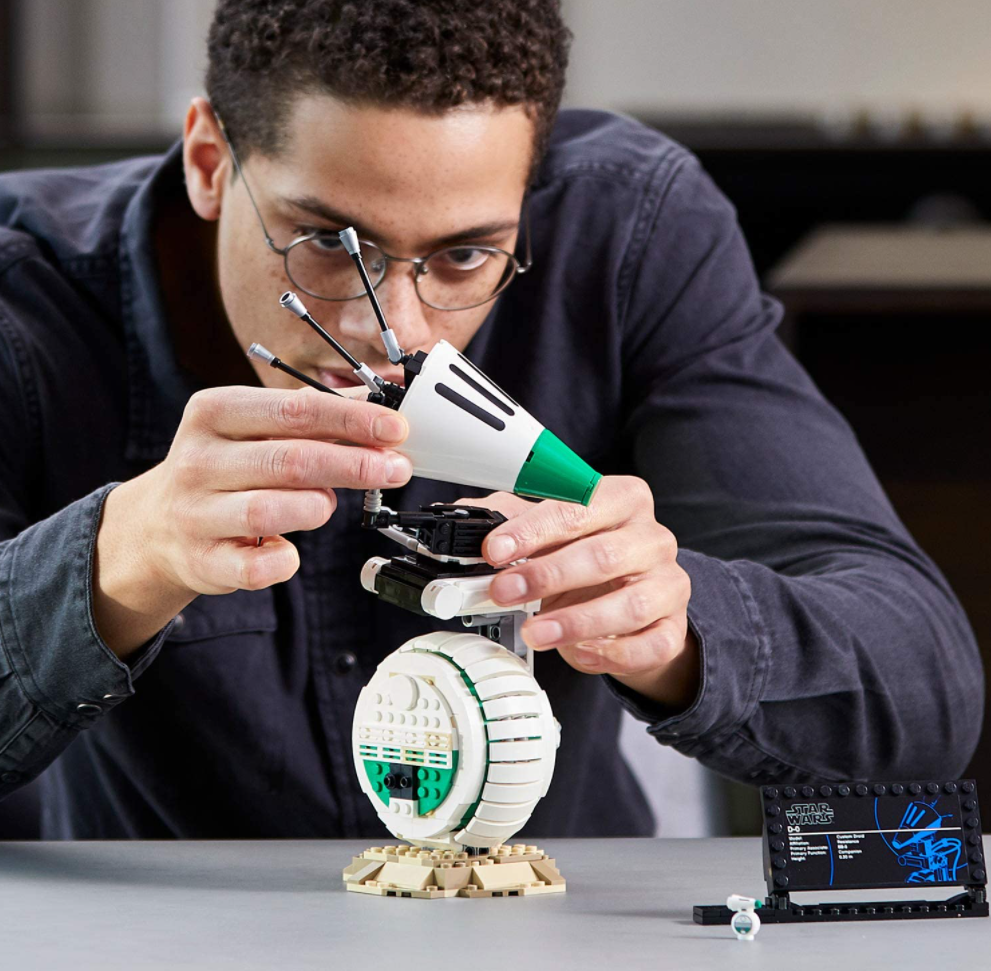 You can build your own collectible model of the D-O droid from The Rise of Skywalker movie. The model features posable antennas and it tilts and rotates 360 degrees. It also features a built-in display stand, an information sign and D-O minifigure to delight collections.  There are 519 pieces in the set It is recommended for ages 10 and up. 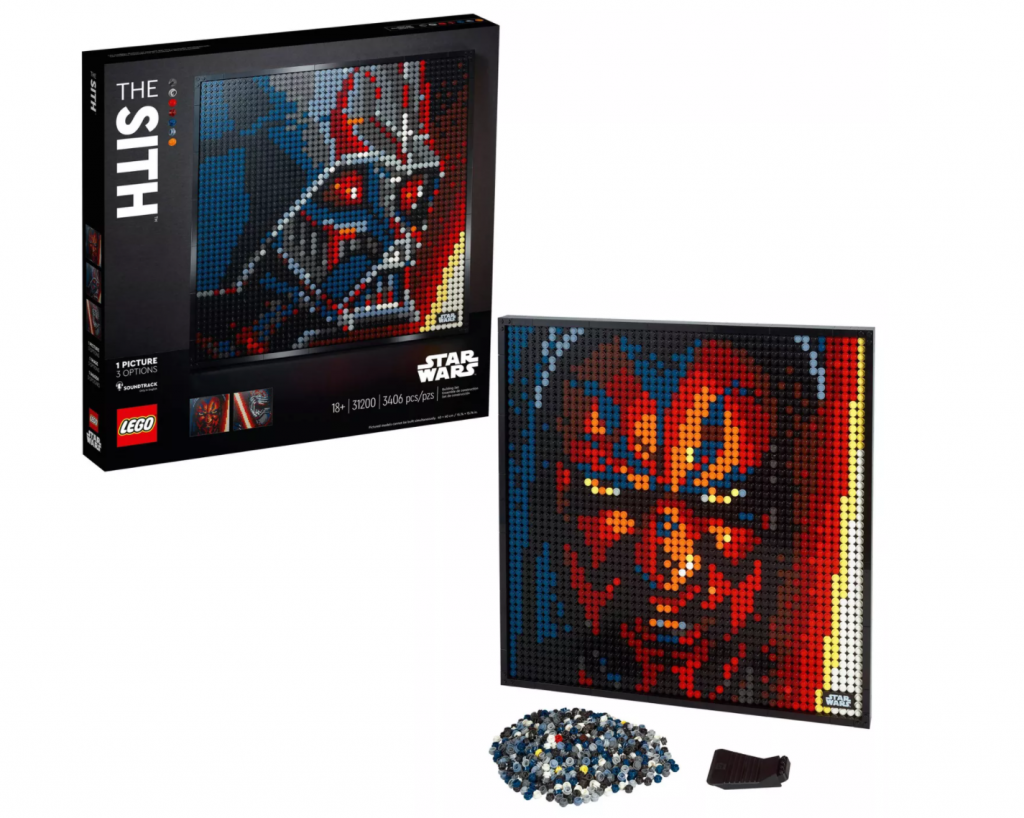 If you’re a Star Wars fan, this is a great set for you. Create an iconic art piece with this LEGO Art Star Wars The Sith (31200) set. Enjoy a well-earned break as you make a special display piece for your home or office. Celebrate the Sith Lords, Darth Maul, Kylo Ren and Darth Vader, with this 3in1 portrait set. If you want more, you can buy and combine 3 sets into an ultimate Darth Vader wall piece. While you build, listen to the included Soundtrack to enjoy details and audio stories linked to the set. Finish the build with the Star Wars signature plate, then display on a wall or shelf. You don’t need to be a painter or have lots of LEGO models to enjoy building this portrait kit. Once you’re done, you’ll have a piece you can be proud to display. This LEGO set is part of a collection of inspiring building kits for adults interested in pop culture, art, design and architecture. The sets also make a great gift for anyone – including yourself.

Make some LEGO art with this awesome set. It retails for $119.00 and you’ll find it at Target here. 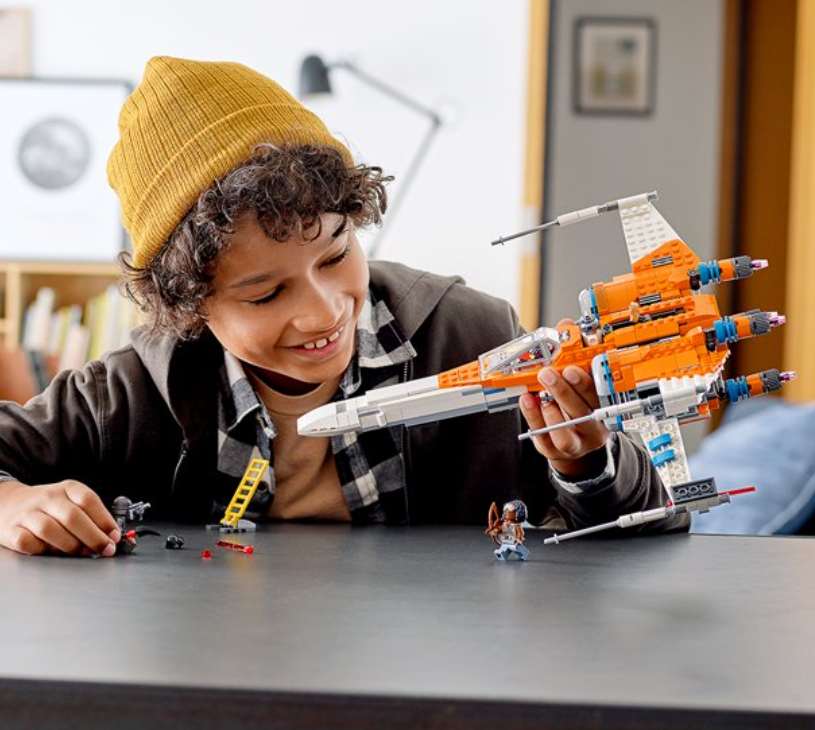 Let youngsters feel like Resistance hero Poe Dameron with this X-wing fighter! Fans will love the sleek design, just like the X-wing in Star Wars: The Rise of Skywalker. Its got loads of play-inspiring features adjustable wings for cruise and attack modes, shooting functions, retractable landing gear and more! This cool starfighter comes with 3 minifigures Poe Dameron, Knight of Ren, Jannah with weapons, plus R2-D2 to inspire Resistance vs. First Order role-play. An epic gift idea for any young Star Wars fan, this construction playset is great for solo or group play and add the 75272 Sith TIE Fighter for even more action. The LEGO Group has been creating brick-built versions of iconic Star Wars starfighters, vehicles, locations and characters since 1999. It’s become a hugely successful theme with a fantastic variety of sets to thrill fans of all ages so join in the fun!

The set retails for $89.95 and you can get it from Walmart here.

Readers are encouraged to keep following along with MickeyBlog for even more awesome holiday finds!