A Talk Show About Disney+, Watch “What’s Up, Disney+”

Disney+ not only has a brand new YouTube channel, but also a new talk show, “What’s Up, Disney+”.  Both are full of all the things that make Disney+ one of the fastest growing streaming services out there. In fact, there is so much content, “What’s Up, Disney+” was created to keep us all up to date on everything that is being released on Disney+.

The YouTube channel has much more than the new talk show.  It has throwback videos like scenes from Phineas and Ferb and The Witches of Waverly Place.

It also has coming soon videos and trailers from Disney+ shows like the newly released “The Right Stuff” docu-series.

And, this Disney+ YouTube channel is now home to the hosted talk show series, “What’s Up, Disney+”.  The first installment was just released this week and is hosted by Jenny Lorenzo and Andre Meadows.  The 15 minute show started by discussing the content now available on Disney+ 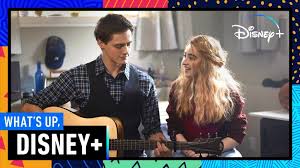 The two hosts discussed Season 2 of the highly anticipated original series,  The Mandalorian.  They also had a chat with the creators of the new Disney Frozen animated short, Once Upon a Snowman. The cast of the Disney+ original movie Clouds made a visit to the show and debuted the original song from the film, also titled, “Clouds”.  Here is the full 15-minute show.

And, of course the show ended with those feisty, funny Muppets from Muppets NOW. New episodes of “What’s Up, Disney+” will air weekly on the YouTube channel so don’t forget to subscribe.  Marvel Entertainment reminds us that Disney+ content contains much more than just classic Disney animation.  It also contains Marvel, National Geographic, Pixar and Star Wars.

Disney+ is now on YouTube! Subscribe to the #DisneyPlus YouTube channel to dive deeper into your favorite movies and series from Disney, Pixar, Marvel, Star Wars, and National Geographic—plus more: https://t.co/64cYcqknHi pic.twitter.com/8M144kvE8K