Due to some unfortunate political nonsense, the Happiest Place on Earth remains closed to the public.

However, thanks to the magic of technology, we can visit the park whenever we want. And Disneyland fans know that October visits bring the most joy. Let’s spend Halloween at Disneyland, everyone!

Early in the Morning 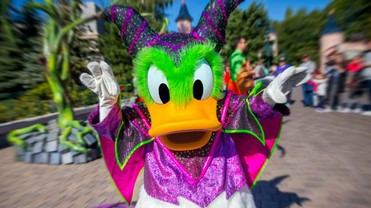 I firmly believe in setting the tone for a park visit. So, let’s not mess around here.

What’s the most essential ride during an October stop at Disneyland? Why, it’s Haunted Mansion, of course! Here’s the regular version of the ride:

I never get tired of Oogie Boogie and the wheel.

Now that’s what I’m talking about! Since we’re started at New Orleans Square, we might as well do the other ride here, too.

Let’s take a water ride on Pirates of the Caribbean!

That was terrific, but we can do anything we want today. I say we teleport over to Mickey’s Not-So-Scary Halloween Party at Magic Kingdom!

We need some real, live Pirates!

Aren’t Disney cast members the best? I love them so.

Of course, you may prefer the real thing. Let’s take a quick look at the best live actors ever to appear at Pirates of the Caribbean!

Early in the pandemic, we did a virtual visit to Disneyland. I’m not looking to repeat it here, but you can read that link to watch all your favorite rides.

We’ve got a Halloween focus this time, but we should still visit some Disneyland staples.

For example, what’s the point of going if we don’t ride Matterhorn Bobsleds?

And Space Mountain, too!

Then, for lunch, we want the best Halloween food at Disneyland! And that’s at the Cozy Cone Motel!

For dessert, the Spoke-y Cone Macaron will cool the fire in your mouth coming from the Flamin’ Hot Cheetos!

Of course, while we’re at Disney California Adventure, we should ride Radiator Springs Racers.

And since we’re right there, we might as well take a spin on Mater’s Junkyard Jamboree, too.

Wait a minute! Isn’t there a special Halloween set here?

That’ll have me humming for the rest of the day. For that matter, so will the song from Luigi’s Honkin’ Haul-o-ween! Hands in the air, everyone!

Also, since we’re really here for Halloween fun, we should check out another ride overlay.

I love the original ride, but I absolutely adore the Monsters After Dark overlay.

Once we’re done there, we should watch a show and admire some decorations at Plaza de la Familia.

We should also roam around Disneyland to examine the holiday decorations.

Dinner and the Shows

We’ve already done almost all the Halloween stuff. So, we dine at a classic for supper.

Once Disneyland opened, Uncle Walt preferred one restaurant over the rest. To honor his memory, we should eat there.

Yes, we’re going to The Plaza! And you should get the Halloween Minnie Cake!

After we’re done with that, there’s really only one Halloween event we’re missing…but it’ll last all night.

Friends, it’s finally time for the Oogie Boogie Bash, A Disney Halloween Party! Watch our friends have fun during all the shows!

Here’s a list of all the shows you can watch during the event:

You can go to the DescenDANCE Party:

Or you can enjoy Mickey’s Trick and Treat Dance Party instead.

Once you’re done dancing, it’s time to wind down for the evening. Don’t worry, though. We’re going out with a bang!

Here’s VILLAINOUS, the Halloween version of World of Color.

That’s the perfect way to end a delightfully spooky October day at Disneyland, isn’t it?