BREAKING NEWS: Performers at Disney’s Polynesian Resort Among Those Cut

Already this week we’ve reported on Disney’s announcement that 28,000 cast members would be let go from Disney’s domestic parks and resorts due to continued closures and financial losses as a result of COVID-19. This has included the beloved Yeeha Bob Jackson who has been delighting visitors to Disney’s Port Orleans Resort for over 2 decades with his vaudevillian style act along with the Grand Floridian Society Orchestra who will be performing for the last time after three decades on October 3rd.

Now it looks like The Spirit of Aloha dinner show at Disney’s Polynesian Village Resort may also be in jeopardy. A recent post on Tikiman’s Unofficial Polynesian Resort Pages seems to hint that the shows incredible performers including musicians, actors and dancers are among those who will be let go in the cuts.

I had to reuse this graphic made by Joshua L Harris today after many of the Cast Members were told they won't be back, including the entertainers at the resort.

If you visit Tikiman’s page and follow along with this thread, there is evidence that performers at the resort have come forward to say they’ve been impacted. Here is an example: 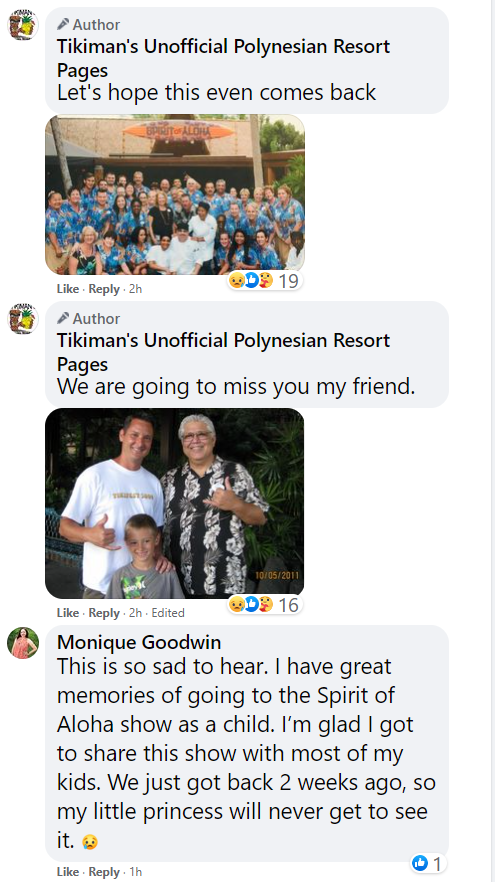 At the time of going to print, we don’t yet have a clear picture of the performers impacted at this time. Its also worth pointing out the cuts may not just be limited to Spirit of Aloha but may also include the performers at Ohana etc.  This is another aspect of Disney’s devastating news that we will continue to follow closely. When promise to keep you informed as soon as we know more.