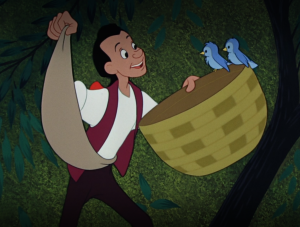 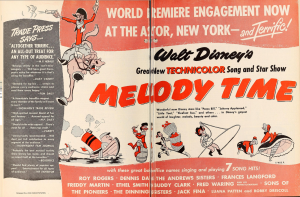 In 1948, Walt Disney Animation studios released the animated short “The Legend of Johnny Appleseed.” It was one of seven segments in the film Melody Time. Melody Time is a collection of shorts with the theme of American folklore.  With upbeat 40s music and endearing stories, the goal of Melody Time was mainly to generate a quick profit.  Disney needed money in order to devote resources to full length narrative films.  In Melody Time, Johnny Appleseed appears alongside American Folk Legends like Pecos Bill.  Johnny Appleseed is the only real person depicted in the film, the rest of the characters are fictional. 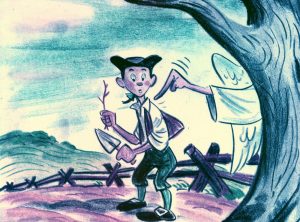 Dennis Day narrates “The Legend of Johnny Appleseed.”  It tells the story of this real American hero. The tale begins as Johnny watches pioneers head west.  He wishes he could follow.  An angel appears to him who inspires Johnny to set out, planting apples as he goes.  Disney’s short highlights many true details about Johnny Appleseed. 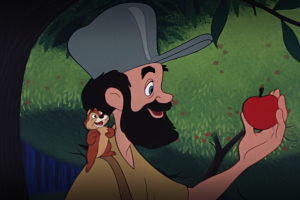 In the short, Johnny walks barefoot.  He carries his bag of apple seeds and his Bible.  Johnny wears a pot on his head.  He befriends animals and is a great helper to the American pioneers.  At the end of the short, Johnny appears as an old man with a long white beard.  He leaves his body behind and joins his angel who tells him that they need more apple trees “where they’re headed.” 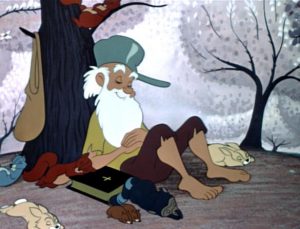 Johnny Appleseed as a Disney Character

Disney Animation Studios was true to the facts we know about Johnny Appleseed’s life.  Much of what we teach our children today is the result of the depiction of Johnny Appleseed in Disney’s version.  His character also makes an appearance in “This is Your Life, Donald Duck” and several episodes of Disney’s House of Mouse. 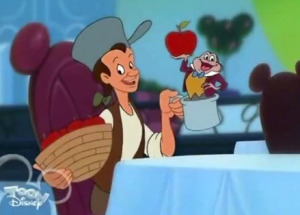 You can find Melody Time on Disney+.  The short begins at the 15 minute mark and runs for 17 minutes.  (Melody Time does appear on Disney+ with the warning that it contains outdated cultural depictions.  This is a result of tobacco use in the Pecos Bill short.)  Your kids will love learning about this great American Hero! 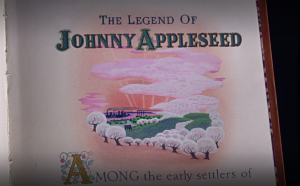 Do you like watching Disney Classics on Disney+?  Tell us in the comments!

Thinking about a visit to Disney?  Simply fill out our form below to get your FREE, no-obligation quote from MickeyTravels!

Find articles like this helpful? Consider working with an Authorized Disney Vacation Planner. As an agent with MickeyTravels, I’m here to help you make your Disney Vacation Magical.  This includes finding the perfect vacation package, discounts, and more! Best of all my services are absolutely FREE.  Get in touch via email at AbbyRY@MickeyTravels.com or follow along on Facebook.