Whether it’s in the desert, a hangar, or above the Death Star, running into Biggs Darklighter is always a good thing. 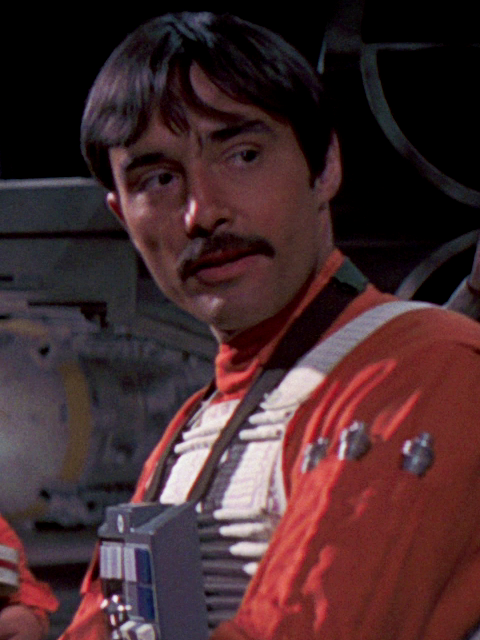 Over Skype, the voice of the actor who portrayed Luke Skywalker’s best friend on Tatooine is that of a long lost confidant; a friend whose dulcet tones you’re happy to hear again and with whom you’re excited to catch up.

Which makes a whole lot of sense, as fans have put themselves in Luke’s shoes since 1977, asking, “Blast it, Biggs, where are you?” 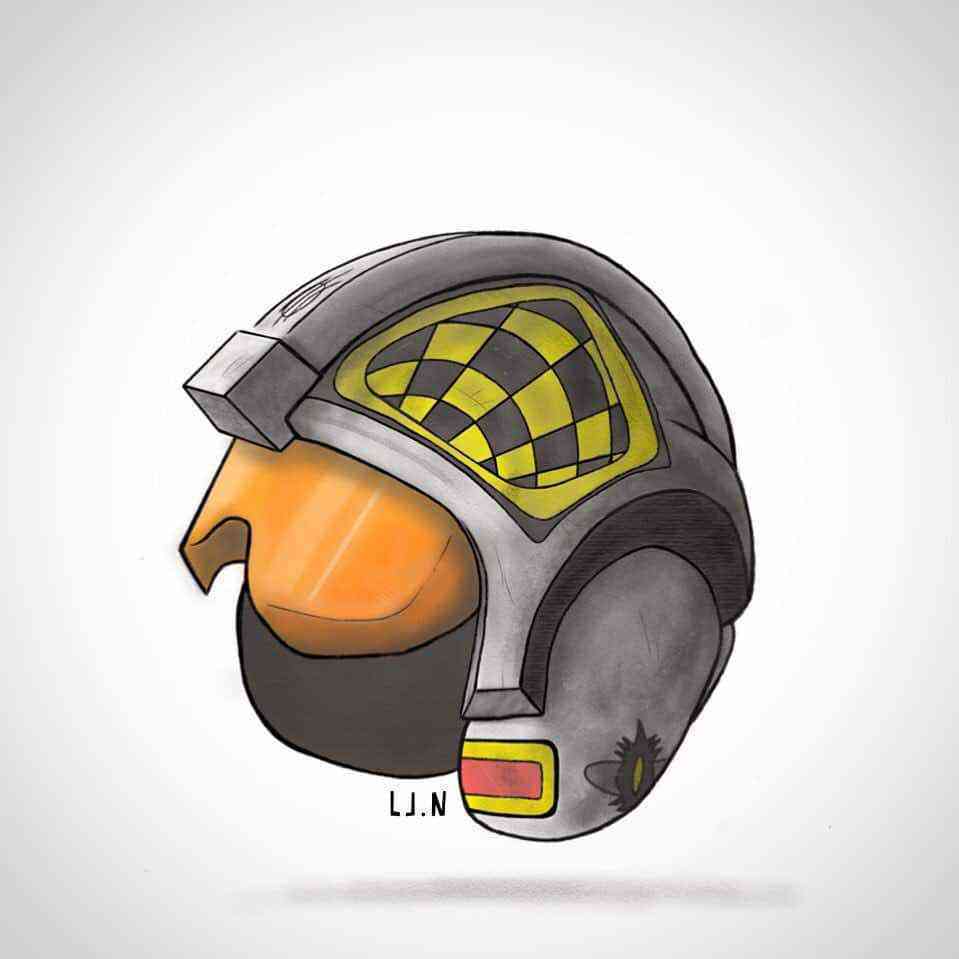 Gold Nine helmet by Lumberjack Nick. Check out his work on Instagram (@lumberjacknickart) and lumberjack-nick.format.com.

Hagon, who lives and works in England, is nothing but deferential to the juggernaut of galactic fandom and was gracious enough to delve deeply into the on and off-screen lore that is Star Wars.

When the topic of his appearance in the 1978 Star Wars Storybook (of all things) surfaced, Hagon cheerfully agreed that many, many fans knew more about Biggs from that children’s book than from the original version of the film. Indeed the same could be said of those who read the novelization. 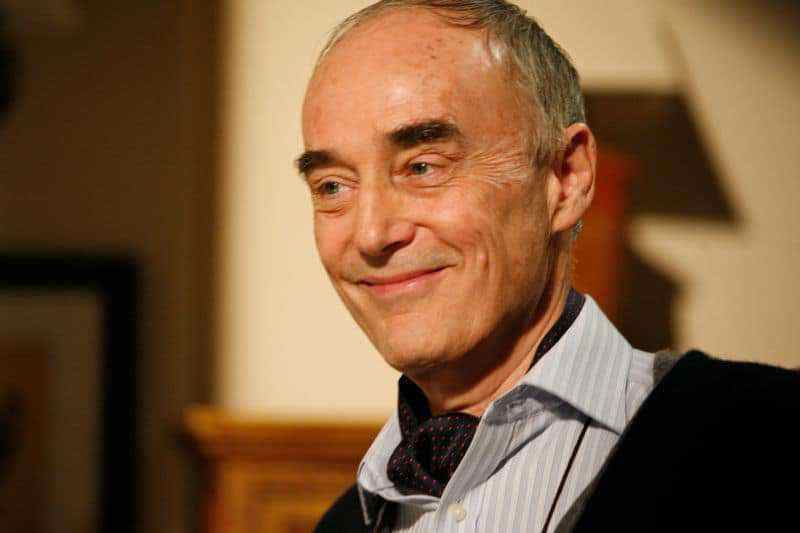 “I have so many people coming up and saying, ‘I’m sure you were in that — we saw that scene,’ and I say, ‘Well, no, you didn’t, but maybe you should have.”

That debate will go on forever, but today — after so many people have seen both the hanger scene added to the 1997 Special Edition, and the deleted scene at Tosche Station — Darklighter’s legend has grown exponentially. 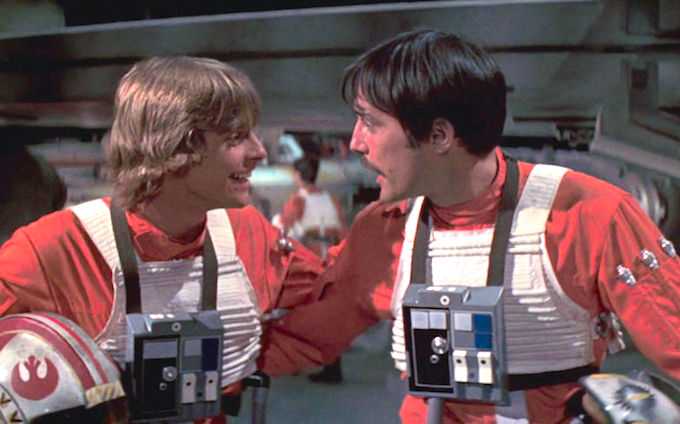 “It’s a moot point,” said Hagon, who first realized how little he appeared in the film as he watched the original 1977 release at a cast screening. “George [Lucas] had the final call, and he was very keen that the film was two hours exactly, no longer, and the scene is very talkative.”

Talkative, sure. But not necessarily without merit. 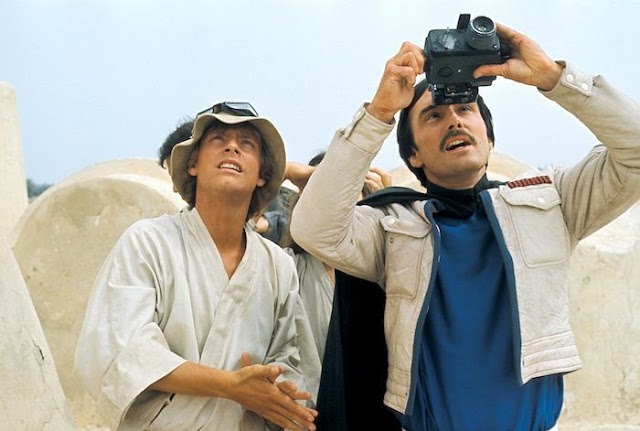 “We felt the same,” said Hagon of those who filmed the Tosche Station scene in Tunisia. “I mean, obviously I was older than Mark, and […Biggs] mutated into this character that was much older and wiser and slightly more rebellious than the early scripts.

“[Lucas] also then changed his name; gave him a good one,” added Garrick. “I mean, it’s one of the best oxymorons in the whole galaxy.”

As are the words “best cutscene,” but that’s what Tosche Station has come to be for Star Wars fans.

“In a way, it’s become a kind of cult,” said Hagon with a chuckle. “People come up and commiserate that it isn’t in the film, or some even put it back in at home.

“You get various people writing more backstory and sending you scripts or whatever,” he continued. “So there’s a lot of — a kind of color — around Biggs.

“So, yeah, we’re lucky to be in one of the best cut scenes in the film, and in movie history.”

“At Celebration [see video below], I was quite touched to see the car that they developed with my name, and with the front bumper being a mustache.

“I thought that was very clever,” he said.

Hagon laughed when his then hirsute upper lip, and whether Diego Luna’s suave 1970s-style stache in Rogue One was an homage to Biggs, continued the conversation.

“Diego, I’m sure he did think of it as an homage,” said Garrick, who knows Luna. “But it’s true. In the early stages, before the final film came out, people were saying [Rogue One’s Cassian Andor], ‘Is this Biggs’ brother? His reincarnation?’

“I worked with Diego on a film a long time before that when he didn’t have a mustache, so, he looks very good with a mustache,” added Hagon, again with a laugh. “But [mine] was the iconic mustache, I must say. And the first.” 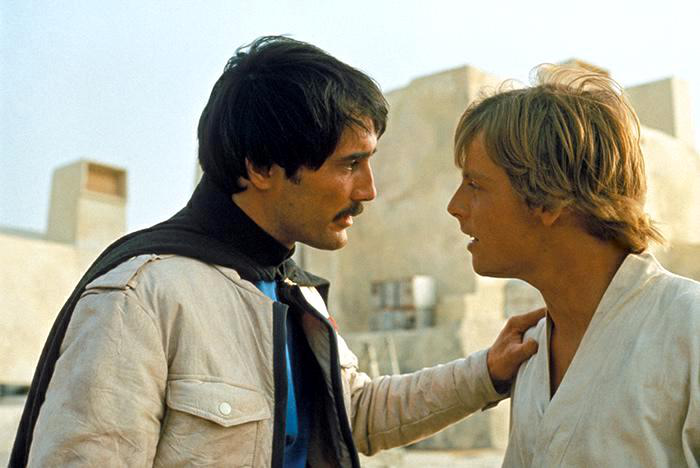 And it almost didn’t appear on celluloid.

“It only was there because I happened to keep it on as I gradually got rid of a full beard and mustache,” said Hagon. “I’d worked in for about a year on a film [The Message], and I took it off bit by bit.

“I must have seen George when I had most of the beard off, and the mustache remained.”

So has the legend of Biggs Darklighter. 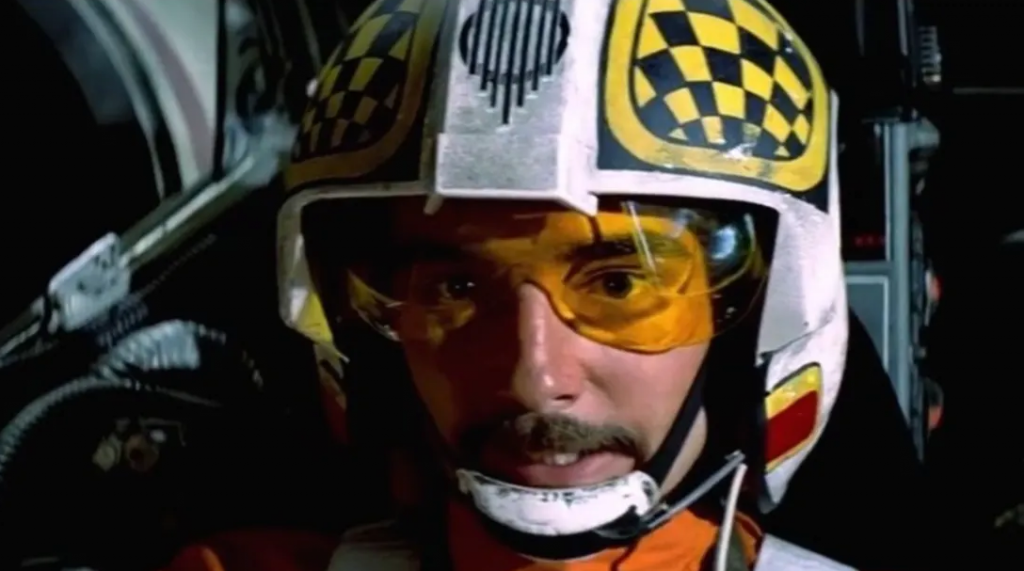 Augmented in subsequent releases of the film, as well as in the Expanded Universe — even in death — Hagon’s character rose to prominence, revered as a founder of “Rogue Squadron.”

However, Hagon points to the original cadre of actors who donned the orange flight suit, explaining that the scenes above the Death Star became vivid to viewers.

“The characters [in the Y and X-wings] themselves were quite individual,” said Hagon. “You have to be very brave to cast Bill [Hootkins as Jek Porkins], wonderful Bill, and put him in a little X-wing with a costume that split up the back because he couldn’t fit into it.

“But it was very brave and very wise to make them such individuals, you know? And Drewe [Henley, Red Leader], a very handsome fellow, and so on.

“There were individual characters, and they were very good actors. You know, you were sneaking very good actors with a lot of experience into those planes, and it was a nice group to be a part of, you know?

“It looks tremendous when it’s finished,” continued Garrick. “We had no idea at all.

“It was all very makeshift, because [the sets were] so primitive at the time.”

But those makeshift cockpits and individual moments of acting have carried the members of Red and Gold Squadrons into the imaginations of generations of fans.

This adulation does not always sit well with everyone, as was the case with Alec Guinness. Hagon had worked previously with Guinness and felt like there might be some camaraderie when the two met on the set.

“But Alec Guinness was a very complex man,” said Garrick. “The meeting that I recall on the set in Tunisia was not one of great — we didn’t have a lot to say to one another, let’s put it that way.

“There were things — shadows in his character that I certainly didn’t know anything of, and Obi-Wan Kenobi became part of his shadow. He didn’t really want to be remembered [that way] because he’d done such great work on so many films.

“But, on the other hand, the film wouldn’t have been anything like as great without him,” continued Hagon. “He really added so much. It’s what Harrison Ford does to the new film.

“There’s just something about these wonderful, charismatic and supremely technical actors… they help make the movie.”

However, Hagon remains unequivocal about his appearance in the Saga.

“Star Wars has been really pleasant,” he said. “Some actors may mind it… but every moment of the afterlife, and tripping around the world, and meeting people who are so enthusiastic and making so many genuinely good-hearted friends, has been a very nice experience.

“We appreciate whatever comes our way in terms of affection. I’ve seen actors in other films… behave as though they hate it, the whole process, or as though they couldn’t care less. And I don’t appreciate that. None of the Star Wars people that I know have that attitude.

“So, I have no objection, and I really value the convention life afterward,” said Hagon.

But the actor would not have minded if his character had made it into Rogue One.

“Angus [MacInnes, Gold Leader] got the prize: He got back in,” said Hagon. “If they’d brought Biggs back, they would have had [to add] a little bit more to color him in, because everybody knows Biggs’ backstory; they’ve all read stuff about Biggs…”

“I’m justifying the fact that I’m not there along with Angus,” he said with a laugh.

But Biggs omission* from the most recent release hasn’t diminished Darklighter’s frequent appearance in toy isles.

In fact, Garrick said he has a collection of his own — including several action figures — saved especially for his grandson.

“It’s quite a good figure. I’m not unhappy with it,” said Hagon. “I look at some of my compatriots, and I think, ‘Oh, that’s bad!’ you know? But mine is quite good.” 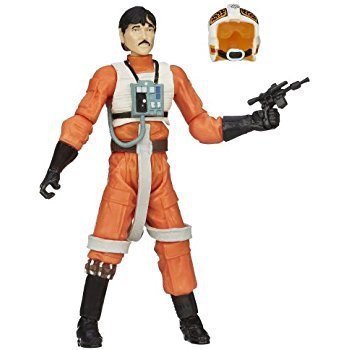 *Omission might not be accurate. Ben Hartley said an extra dressed as Biggs was on the set of Rogue One

BTW: This story originally ran on another site in July 2017. However, I thought it was time for Red Three to join his compatriots in our Rebel/Resistance Pilots Series. It remains one of my favorite interviews ever.