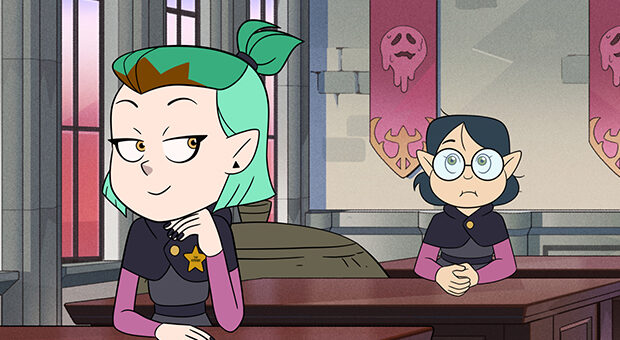 There’s been a TON of buzz around Disney’s “The Owl House” and rightly so! The show follows around a 14-year old Dominican American girl who accidentally stumbles across a portal to an alternate world called the Boiling Isles where she encounters a powerful witch named Eda and teeny tiny demon named king.

The series became a quick favorite with kids who grew up with Harry Potter and other sci-fi/fantasy films and books for its tip of the hat to horror-fantasy genres. However, its something entirely different that has fans excited. According to a recent piece The Mary Sue,  it would seem the show is stepping into new territory for Disney with signs suggesting that the protagonist might be bisexual/queer. . If you’ve been following along with Owl House then you know that Luz has previously had a crush on a boy named Navareth in the episode Witches Before Wizards. However, later on in an episode Adventures in Eleme she seems to developing a crush on a female character. This centers around the character Amity a girl who shares a similar interest with Luz in The Good Witch Azura book series, like Luz enjoys reading to children and works her hardest to be an all-star student.

But what REALLY got fans thinking that there may be more between Luz and Amity than just friendship came from a promo Disney released for the series which you can see below!

There is no Heterosexual explanation for this pic.twitter.com/IxqbeNVFB5

Titled Grom, the episode features both characters wearing formal attire and standing close together.  This, in addition to the friendship between Lux and Amity seemingly growing with every episode has sparked rumors that there’s more to come!  Add to this the fact that Dana Terrance (the show’s creator) has recently come as bisexcual online and that writers on the show including Molly Ostertag are openly queer as well.

Within recent years’ children’s animation has made leaps and bounds when it comes to LGBTQ+ representation. We’ve seen this most recently in She-Ra and the Princess of Power as well as other shows like The Legend of Korra, Steven Universe The Loud House and Kipo and the Age of Wonderbeasts.