Firstly. Hand’s down, Shag is my favorite artist. Whether he’s producing his own magic, interpreting Disney’s pixie dust, or traveling to a galaxy far, far away – Josh Agle’s style is signature. 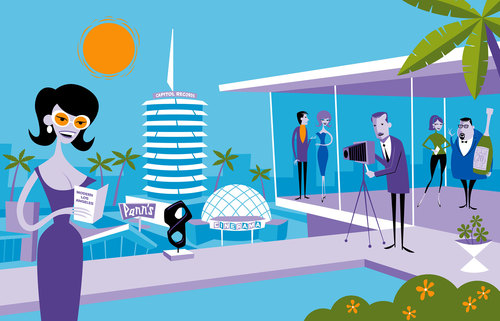 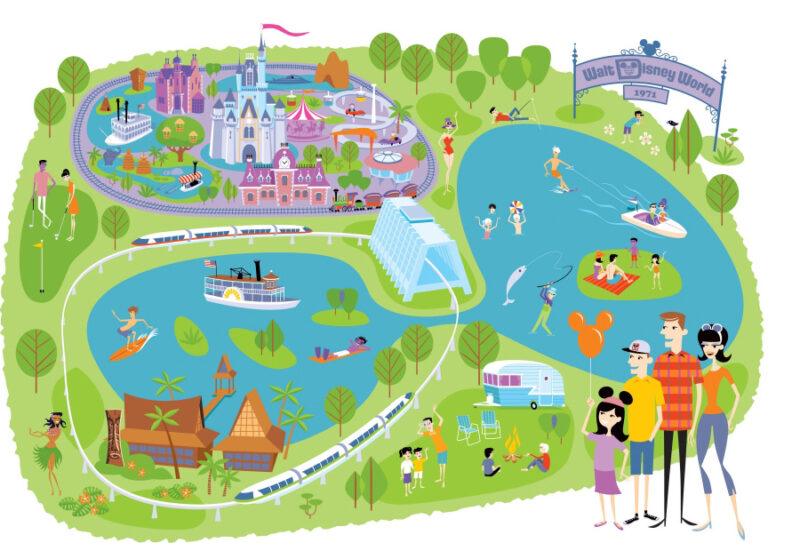 Shag is a frequent collaborator with Disney. Image: Shag.com

Star Wars is a frequent motif. This is A Wretched Hive. Image courtesy Shag.

And his new project is no different. Although it sounds like the idea started at the bottom of a tiki mug at the annual gathering of tiki enthusiasts, “Tiki Oasis.” 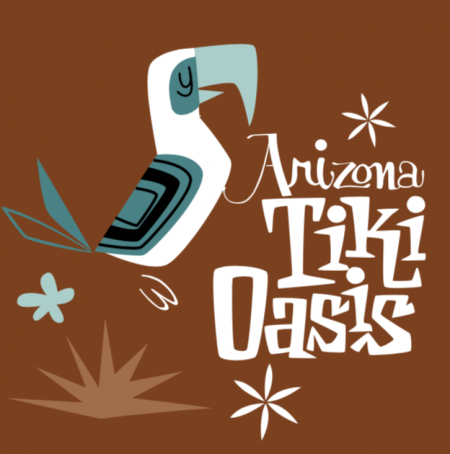 Shag was speaking with the founder of Beeline Creative, Brandon Giraldez, about his Geeki Tikis line.

Anyway, Giraldez and his company had already done some terrific Star Wars stuff: 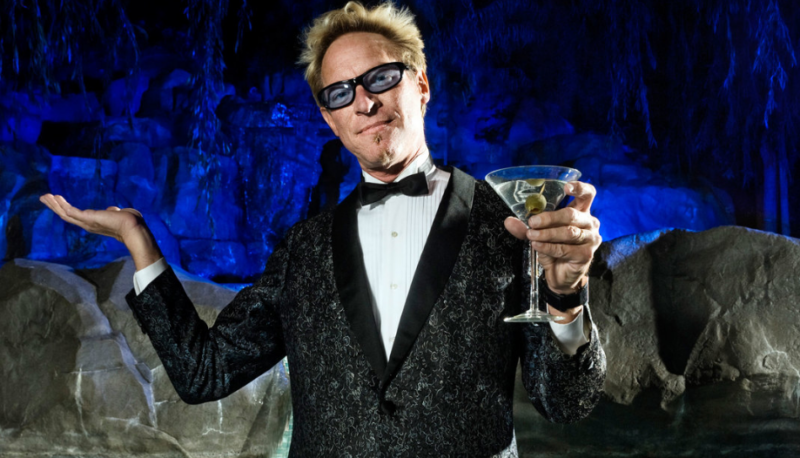 “We got to talking and he said he’d like to do a special series of Shag Star Wars tiki mugs,” said Shag. “And I thought that sounded like a good idea.

“So, originally we were just going to do the mugs. And then when he saw the mug design, he’s like, ‘We should do more stuff! We should do coasters, a Hawaiian shirt…’

“And then, finally, he said we should do prints,” he said. 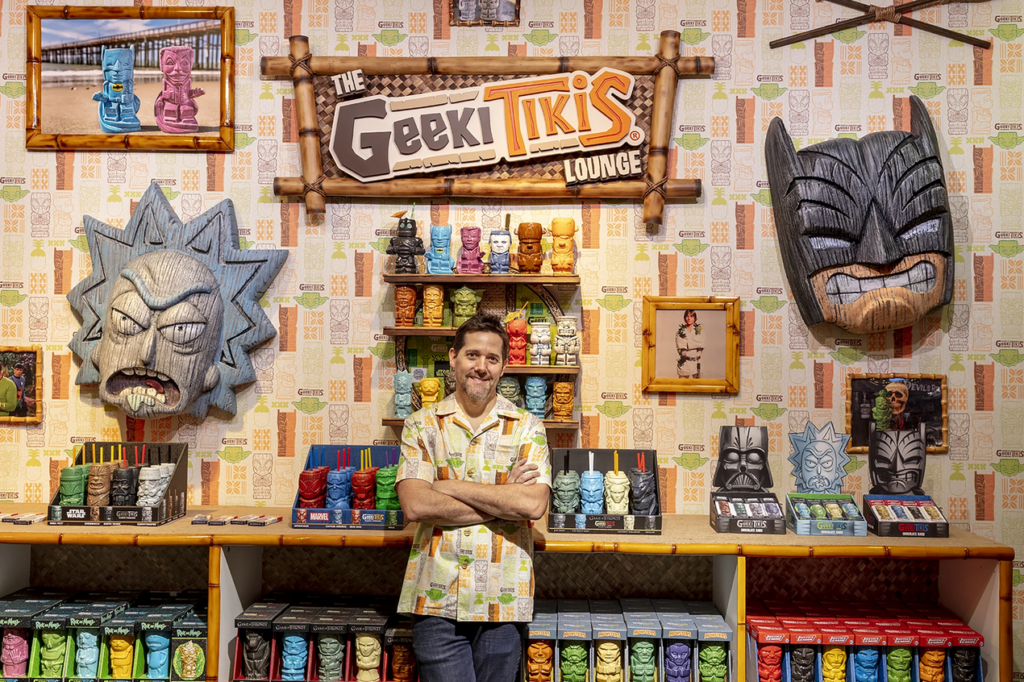 “The best part is, that Lucasfilm kind of let me go off script and, you know, do these prints with this giant sort of tiki heads in them and the Star Wars characters,” explained Shag. “So you know, outside of canon, I guess.

“I don’t think you have any of the Star Wars characters coming upon themselves, in giant likenesses.”

But, there’s a want to bring something beyond kitsch; beyond parody.

Shag, has worked with a number of amazing IPs (Planet of the Apes, Star Wars, Marvel, Disney, Coca-Cola).

And I asked about how difficult it might be to work with a well-known property. 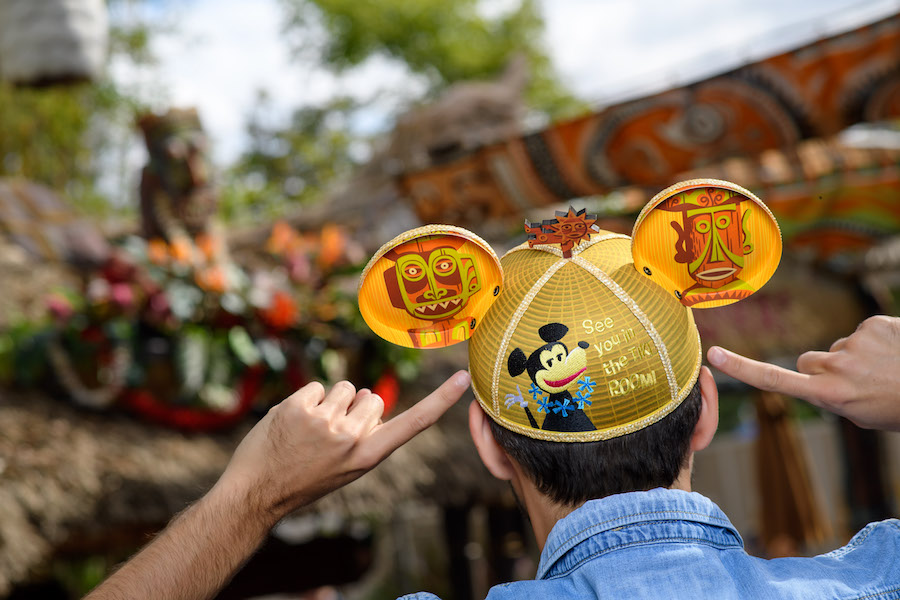 “The hardest part is kind of trying to make it look like the character, but also to look, to look like a Shag piece of art,” he said. “You know, it’s easy to get lost in all the details. You know, when I’m painting Darth Vader, you know, it would be easy to try and draw every single little detail.

“But you know, that’s not what Shag art is. It’s kind of refined down. Or I don’t know if refined is, is, is the right word, but it’s simplified, you know, it’s flattened… I need to simplify it; need to take parts out. I need to smooth these parts.

“And that’s, that’s kinda the hardest part of it,” he said.

Easier To Show Than Tell

But Shag makes it look easy; click through the ‘grams:

Tomorrow, Wednesday July 22, would have been the opening day of San Diego Comic-Con. At 9:00 am PDT, geekitikis.com will launch preorders for the official collaboration between @beelinecreative and Shag. ﻿ ﻿Each of the four Star Wars tiki mugs is limited to 500 and includes a character totem swizzlestick and custom packaging. ﻿ ﻿For the full line of mugs, swizzles, coasters and aloha shirts, sign up at geekitikis.com or the link in the bio of @beelinecreative. ﻿ ﻿@starwars @lucasfilm @disney #shagstarwars #geekitikis #beelinecreative #sdcc2020 #comicconathome #comicconathome2020

Tomorrow at 9am PDT via geekitikis.com we will launch Pre-Orders for our official Star Wars collaboration between @theartistshag and @beelinecreative 🗿🪐 ・・・ The Special Edition SHAG x Geeki Tikis mugs include #darthvader #bobafett #chewbacca #yoda – each mug comes with a custom swizzle stick. The edition is limited to 500pcs of each character. ・・・ A full list of our SHAG x Geeki Tikis products, including Prints, Aloha Shirts and Barware, will be sent tonight via our newsletter, so sign-up today (link in bio☝🏻) ・・・ ﻿#shagstarwars #beelinecreative #geekitikis #tikimugs #theartistshag #artprints #alohashirts #barware #sdcc #sdcc2020 #lucasfilm #starwars #disney #comicconathome

And check out the stuff you’ve been waiting for! 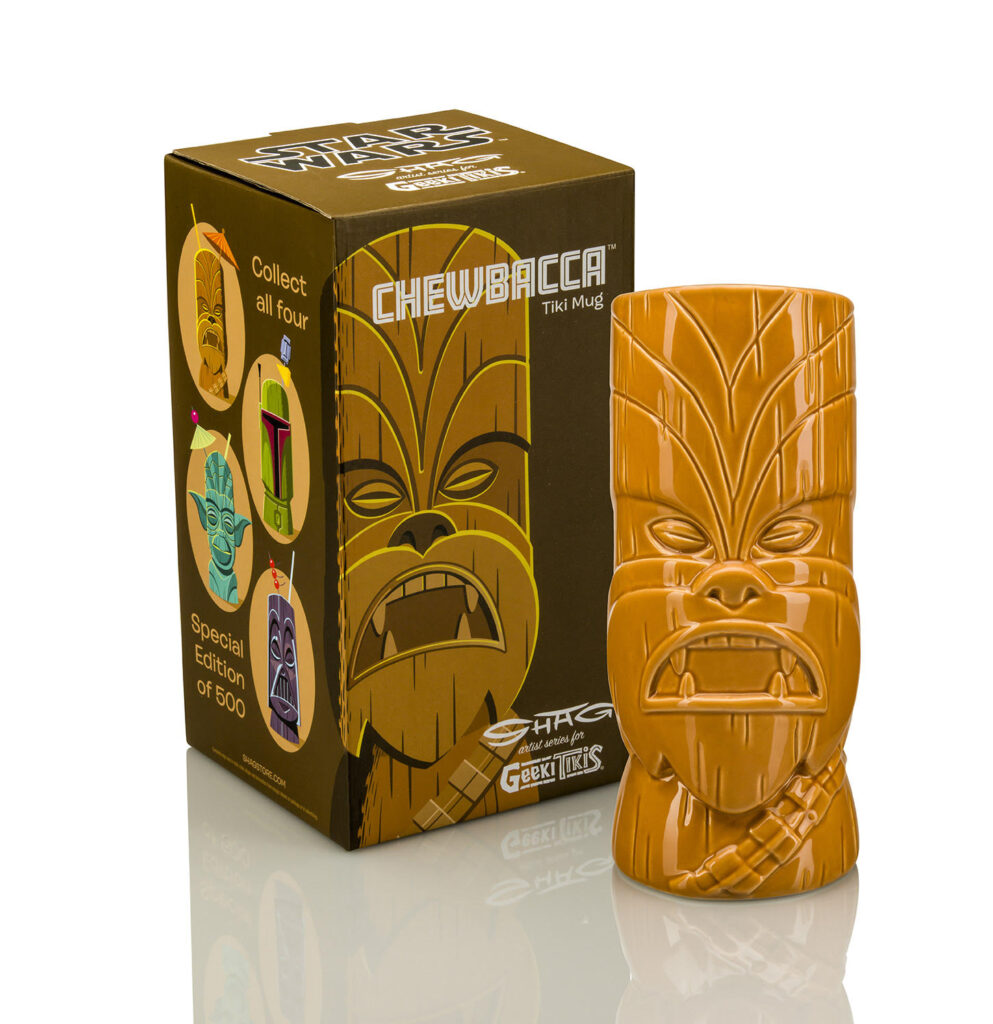 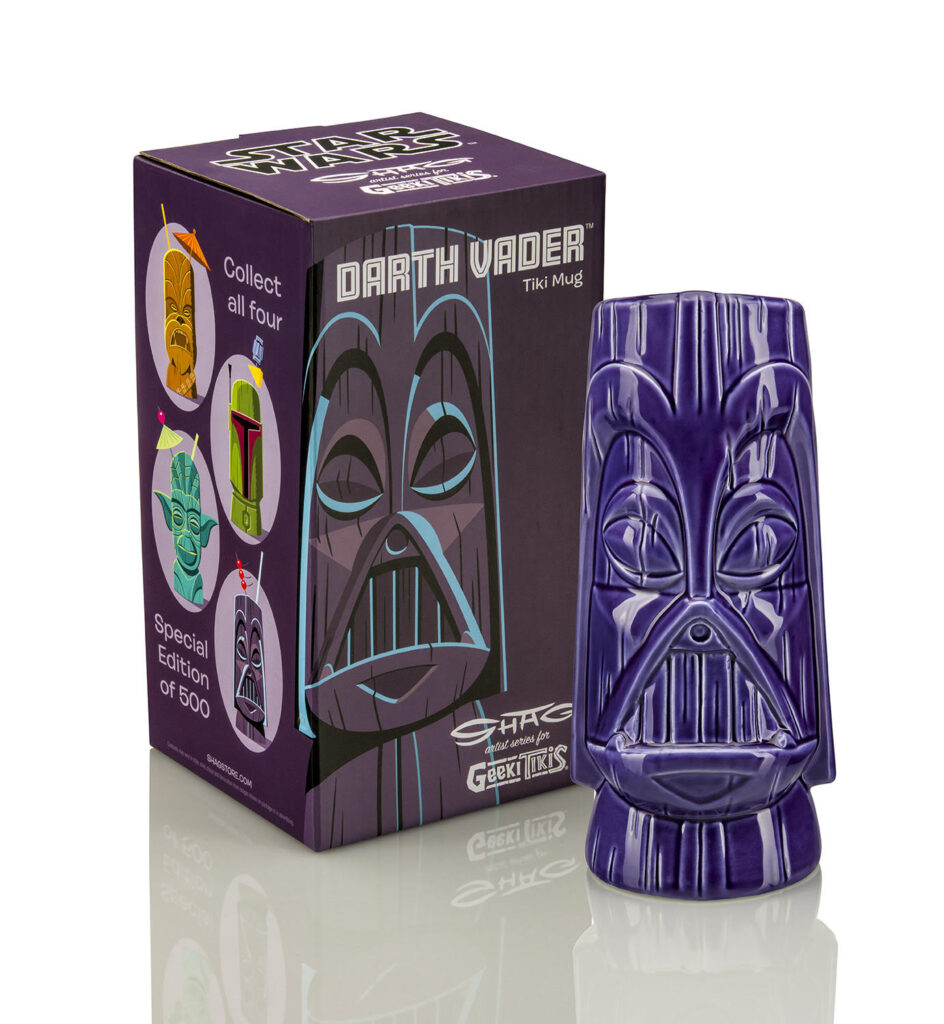 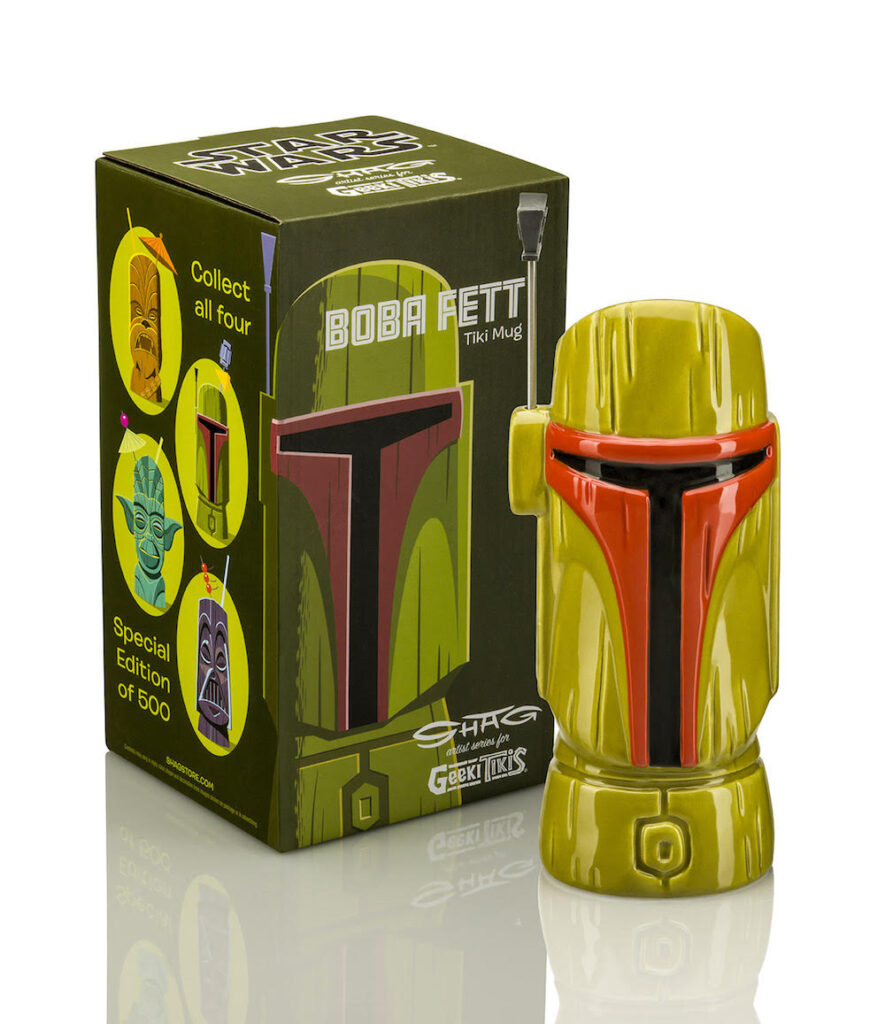 I’d hate to put a drink on these! 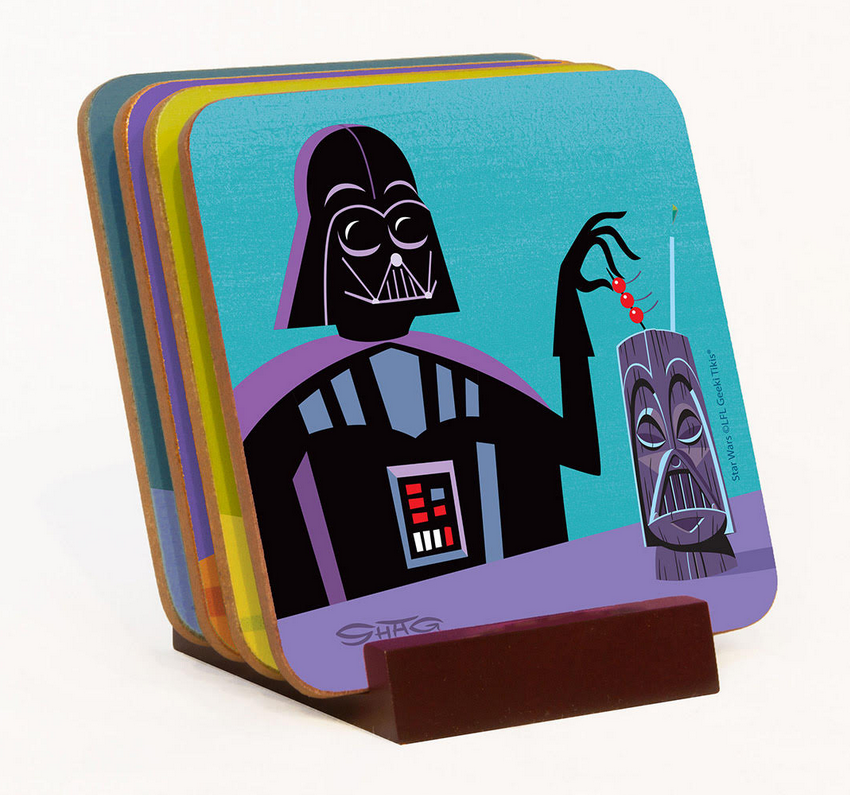 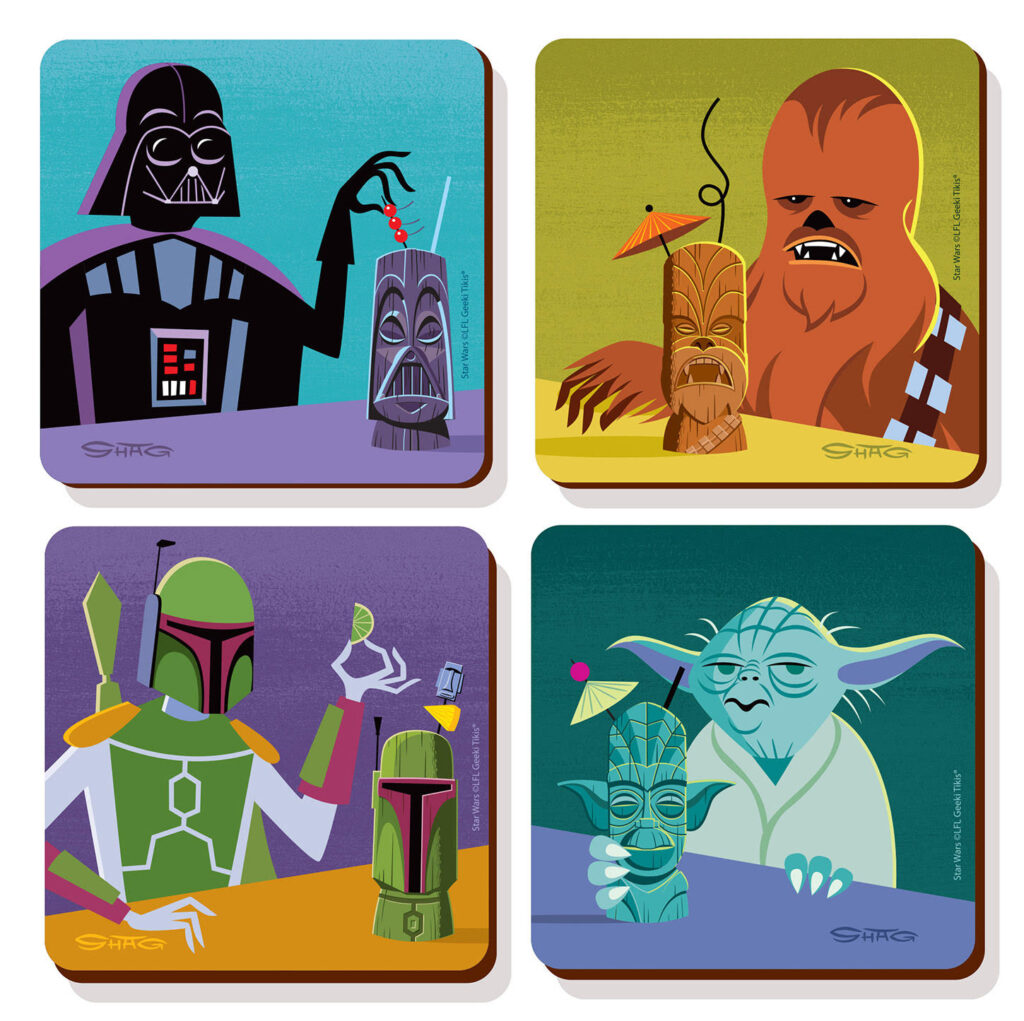 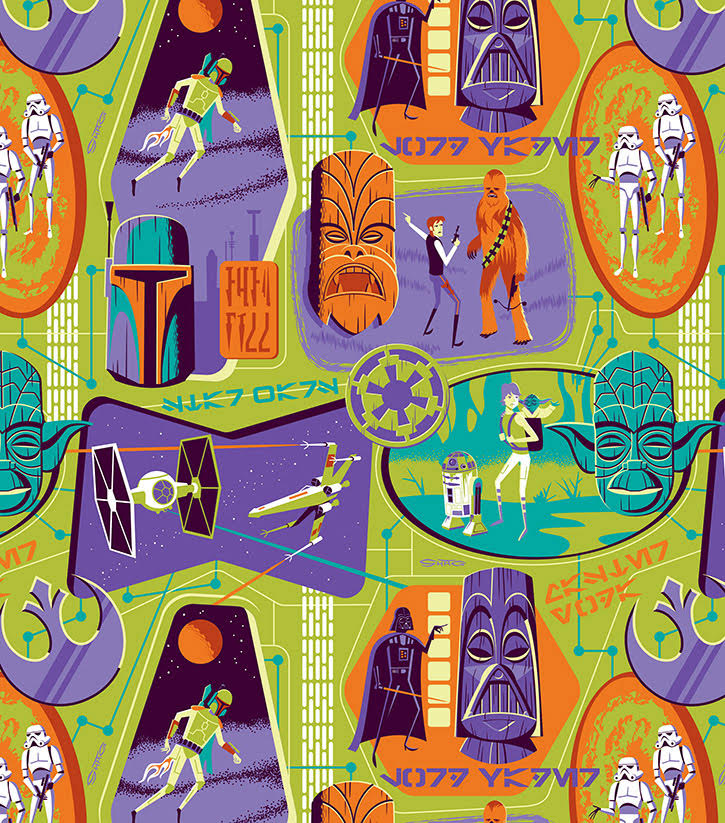 By the way, If you see the above. Buy it. The cantina shirt is VERY hard to find. JB Image: ©️&™️ Lucasfilm Ltd.

The Ceaseless Sweep: “I mean, some of the things are just completely out there. Like the Vader. He’s got a couple of stormtroopers and they’ve just come across this giant likeness of Darth Vader.” Shag. Image: ©️&™️ Lucasfilm Ltd. 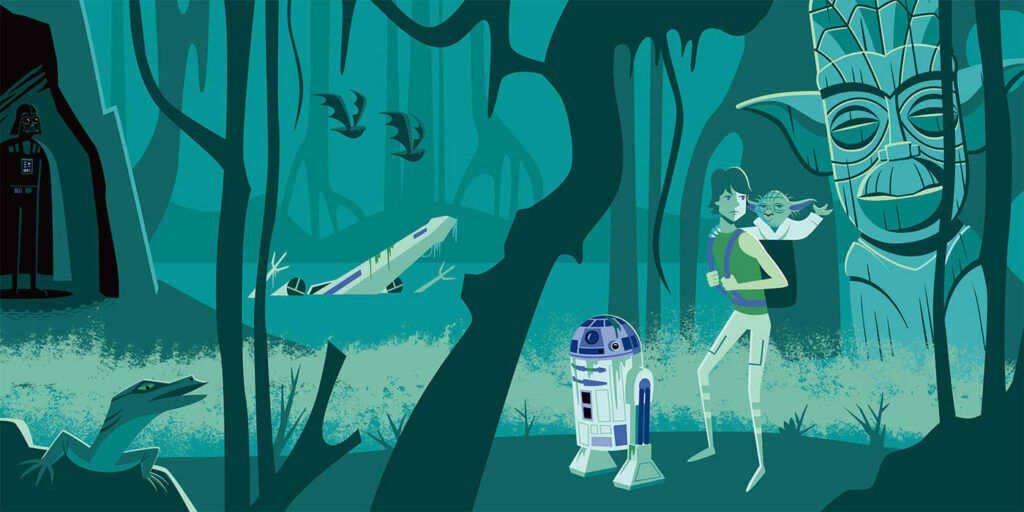 Dilemma on Dagobah: “Yoda and Luke Skywalker; that’s obviously set on Dagobah. So, that’s actually, you know, something that actually happened [in the Empire Strikes Back]. The only difference is there happens to be a big carved Yoda in the swamp.” Shag. Image: ©️&™️ Lucasfilm Ltd. 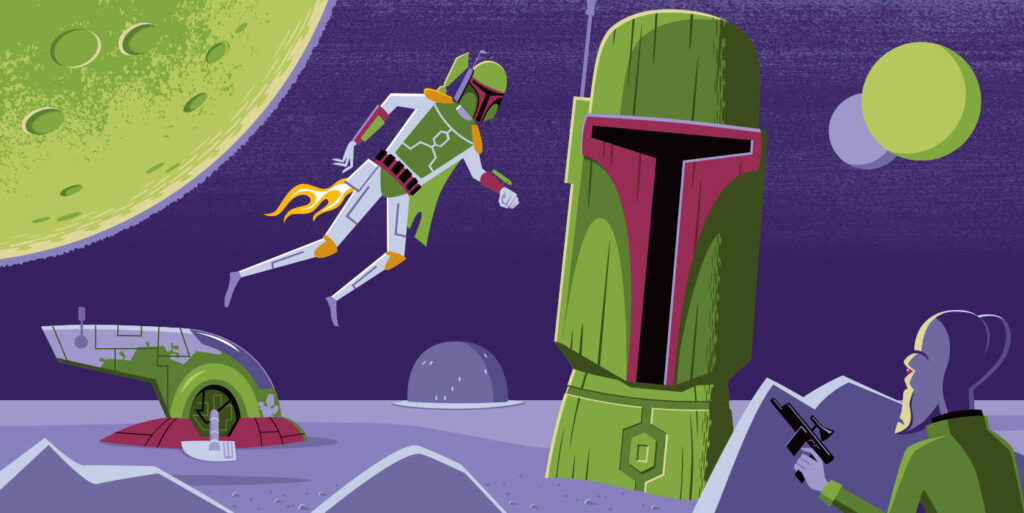 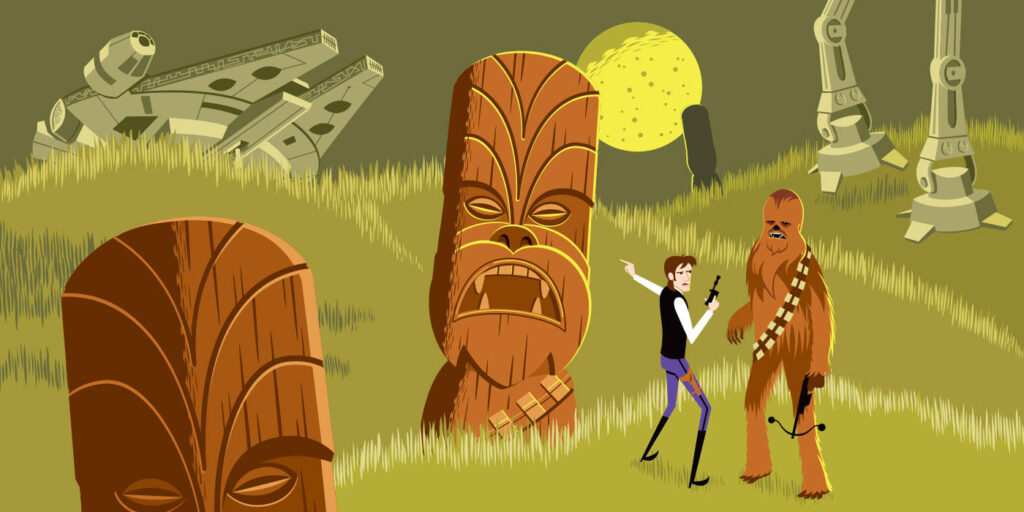 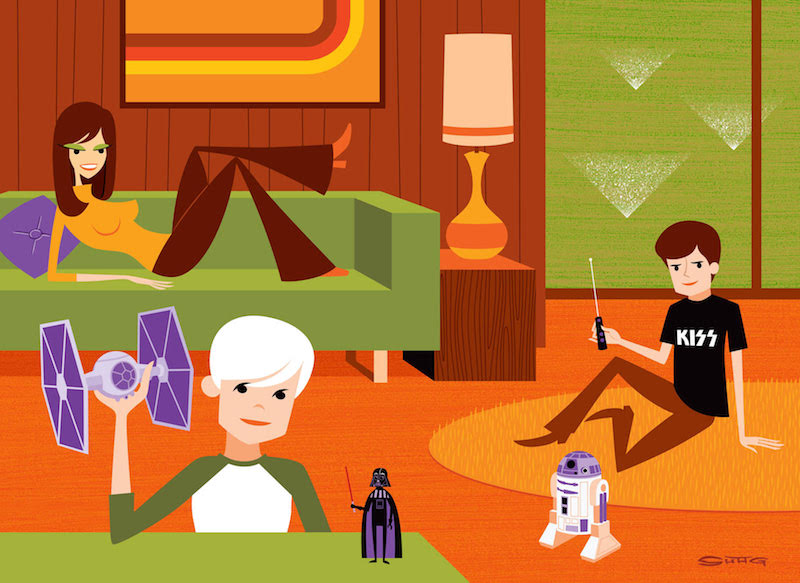 Meanwhile, the whole collection is very personal to Shag, who was one of the first people anywhere to see Star Wars (1977).

“I’ve been a Star Wars fan since the beginning,” mused Shag. “The very first time I ever heard the word Star Wars was a radio commercial for the movie — the first movie — and I was on a school bus.

“They played top-40 radio and commercial for Star Wars came on and it was… all the spaceship sounds. And then the narrator saying, ‘Don’t worry, that’s just an X-wing fighter.’

“And I’m like, what is this? This sounds really cool. And then at the end [the narrator] said, Star Wars is coming in May.

“I was like, Star Wars? What a dumb name for a movie. That’s like calling a movie Car Chase.”

But George Lucas’ opus made a distinct impression. 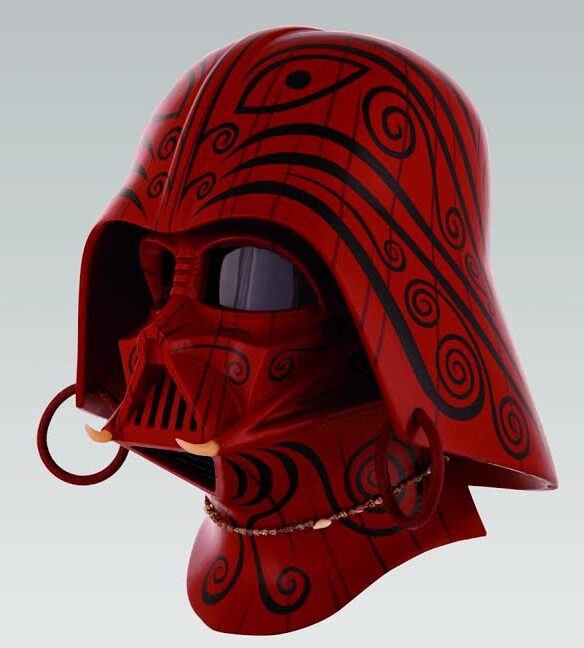 “And then a couple of weeks later, I was at the movies and I even remember what movie I’m seeing. It was Jabberwocky. And before the movie, they had a preview for Star Wars and that’s the first time I had seen… anything related to it. I remember I couldn’t believe what I was seeing, you know? And back then, I mean, imagine you’ve never seen Darth Vader; never seen a Stormtrooper and all that stuff in this preview.

“And I’m just like, Oh my God, what is this? This is the coolest thing I’ve ever seen. So, I was sure it was going to be like an amazing movie. 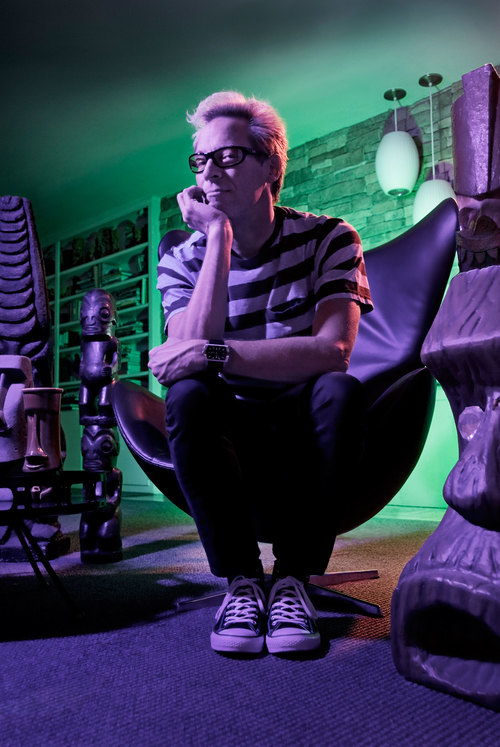 However, he’s why I’m into Shag. I asked the artist about his motivation. And noted that some artists wouldn’t be interested in pop culture, Tiki bars, Star Wars, or Disney.

“One of my big goals is to make people who look at the art happier; to improve their day just a little bit, you know? That’s not every artist’s goal. And there are a lot of artists who don’t want to do that at all. And they’re great artists,” explained Shag, who, at one point had a life-threatening accident. “After I had my accident, I kind of shifted what I – what my goals were as an artist; what I wanted my art to do, what I wanted my legacy to be.

“So at least for the last 10 or 12 years, when I’ve done art, I’ve thought one of the overarching things that I can contribute to this to this world is to make people a little bit happier.”

I mean, that sounds like a legacy worthy of an artistic Jedi, no?

Finally, if you want to know MORE about Shag (after nearly 1000 words), check out this terrific video from Comic-Con International, in which Josh Agle talks about his life and influences:

Thank you, Shag. You’re an institution (and an inspiration).