With rumors of new adventures in the offing, let’s throw it back to Star Wars 2018….

This review of Solo: A Star Wars Story begins with two tweets.

One from me. And one to me.

Sit back and enjoy!

Firstly, I took Chewbacca’s advice and left my expectations, worry, and “headcanon” at the door. 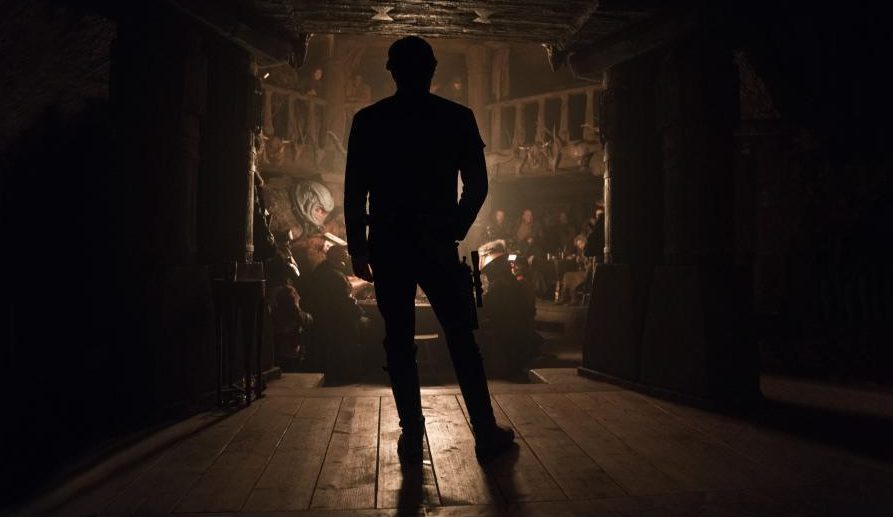 Secondly, as I sat and watched Solo for the first time, I kept thinking about kids.

My children. Kids I knew growing up; teenagers I know now – the boys and girls, all at an age when we all thought we were invincible. Then school ends or college comes, and the outlook and focus changes. Wild tales and beautiful ideas and fantastic news — knowledge, and experience — erode that feeling of invincibility leaving a thin veneer of bravado.

Watching solo is an awful lot like watching that process; remembering seemingly superhuman friends and acquaintances, witnessing them make a lot of mistakes, but living to tell the tale. Sometimes those people learn from their mistakes. 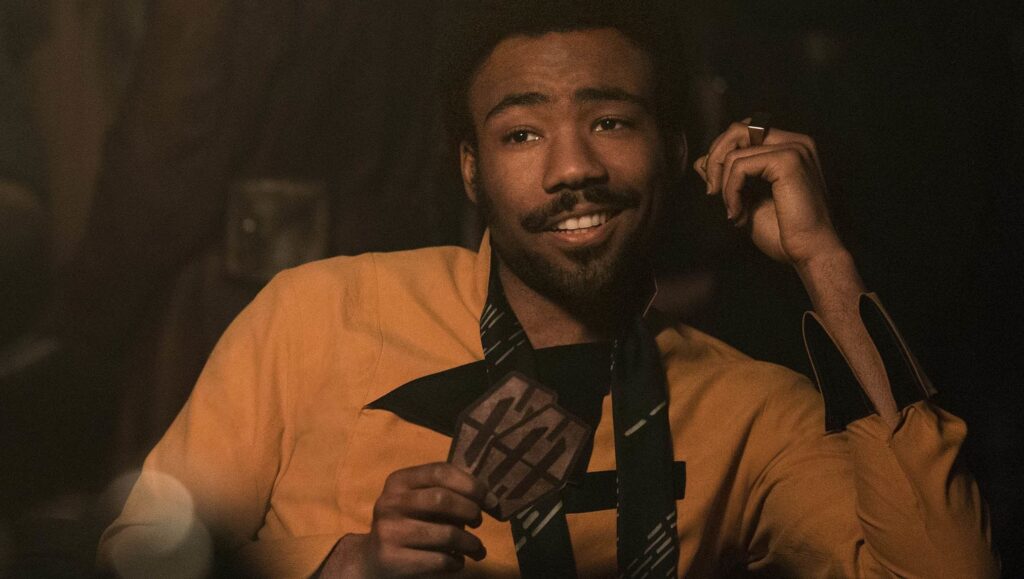 Every time he should go one way, he goes the other way. Someone tells him left; he goes right. And while, as a father, that is difficult to watch in my sons, watching Han hang himself out to dry is the obvious fun of the film. Because, to me, the real crux of Solo’s character is Han in A New Hope, freshly freed from a trash compactor (“No reward is worth this…), screaming; rushing headlong through the Death Star’s corridors, all in a desperate attempt to cover Luke and Leia’s escape.

The surprise on Harrison Ford’s face as he runs into “some old friends” and turns tail is perfect and completes the summary sequence of the characterization.

Lando and L3 take the Falcon into hyperspace as Han looks on. (Disney)

Somehow, director Ron Howard and writers Lawrence and Jon Kasdan’s movie strings moments like those mentioned above into a film with real heart.

Solo: A Star Wars Story is fun, not frivolous, and captures archetypal adolescence in the guise of our beloved soap opera in space.

Rebellion against authority, the assertion of control over one’s destiny, the pain of unrequited love, and the joy of real and lasting friendships are all there.

And pay attention: The movie’s more profound moments are subtle, tucked in there amongst the callbacks, callouts, and explosions, and often reflected in Ehrenreich’s face. 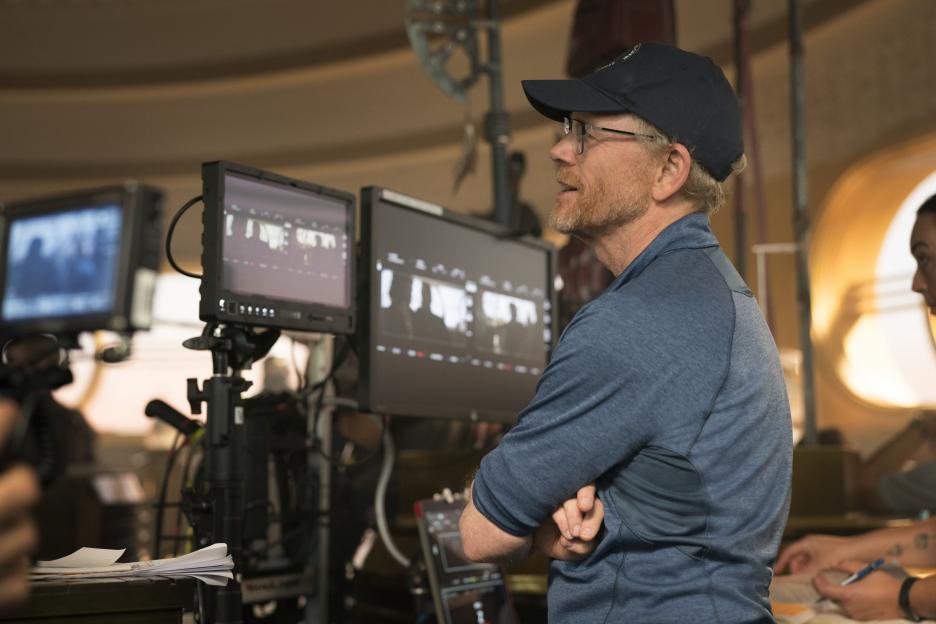 Lando and L3 take the Falcon into hyperspace as Han looks on. (Disney)

“We are what they grow beyond,” said Yoda about teachers, and watching Beckett (Woody Harrelson) and his original crew bear the unwanted burden of mentoring a naïve new smuggler provides much of the movie’s lifeblood, as do sequences where Qi’ra (Emilia Clarke) has moments alone with young Han.

Indeed, the pain in both Qi’ra and Beckett’s eyes while they watch young Solo work so earnestly to find a family — a purpose — is palpable, as well.

Yes, there are Easter eggs and artifacts and allusions and foreshadowing and namedrops. And all of that is fun, especially as I saw my oldest son Jack, eight, begin to piece the Solo saga together; his big blue eyes shining with delight when characters or scenarios struk him as important. But more important to me was that Jack and I, for just a few moments, happily sat together in sheer appreciation of the story; not as father and son, but as fans – for a few moments exactly the same age.

Also paramount to my enjoyment was the deft handling of three beloved characters: Han (of course), Chewbacca (Suotamo – who, through his eyes and mannerisms, squeezes quite a bit of emotion out of the role), and Lando Calrissian (the ubiquitous Donald Glover) who was — indeed — “spectacular.” 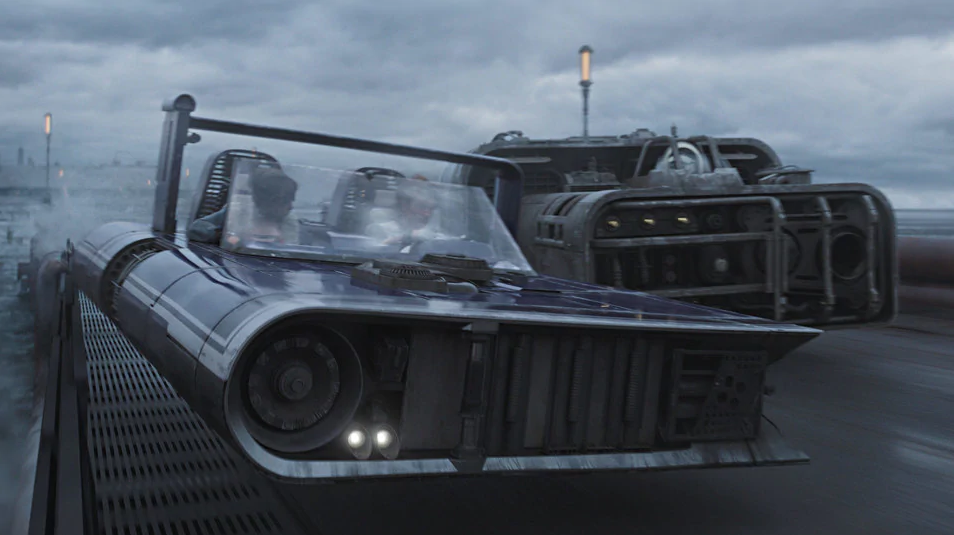 Origin stories dot the popcorn cinema schedule. But not many are handled as expertly as Howard dealt with this one, particularly the development of Han and Chewie’s brotherly relationship and the table-setting of Solo and Calrissian’s somewhat fractured acquaintance.

From a pure fan perspective, the American Graffiti-Esque drag race featured in the trailers is a real treat, as are other references to the Lucasfilm catalog.

Thanks to those elements as well as characters that you can hate (e.g., Paul Bettany’s Dryden Voss) and love (Phoebe Waller-Bridge’s “L3 37”, Jon Favreau’s “Rio”) — and the “Kasdanian” dialogue that makes you laugh (and cry, seriously); Solo kept my attention from the opening words on the screen straight through until John Williams’ familiar fanfare.

Finally, this movie, minus a few bumps and bruises, is as rewatchable as any in the Original Trilogy.

“Sit back and enjoy!”

Solo: A Star Wars Story – The beginning of a beautiful friendship. (Disney)

Solo: A Star Wars Story is available to stream on Disney plus. The original version of this story is linked here.