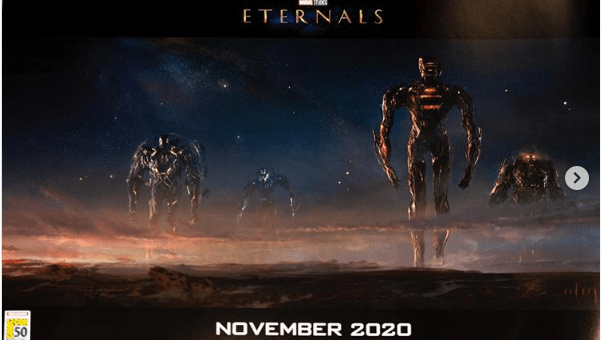 With theaters still closed around the country, its hard to get excited about upcoming cinematic releases as they all just feel so far away. However, we have a sneak peek to share with you compliments of Yahoo Entertainment that did pique our interest!  A behind-the-scenes photo shared to Instagram by Gilgamesh actor Dan Lee apparently has a little bit of a Marvel’s  ‘Eternals’ reveal!

Lee snapped the image below from the set of this new Marvel Phase 4 movie which included a welcome letter from Marvel Studios, a pretty posh trailer and – a previously unseen piece of artwork!

Though the image is super tiny (zooming helps!) it would appear to be a group shot that features The Eternals.  Another insight revealed by Yahoo was that six distinct lights can be seen behind the Eternals.  Fans of Marvel comics may also recognize the face of Eson the Searcher (a Celestial) who also appeared in the Infinity Stones sequence of Guardians of the Galaxy wielding the Power Stone. 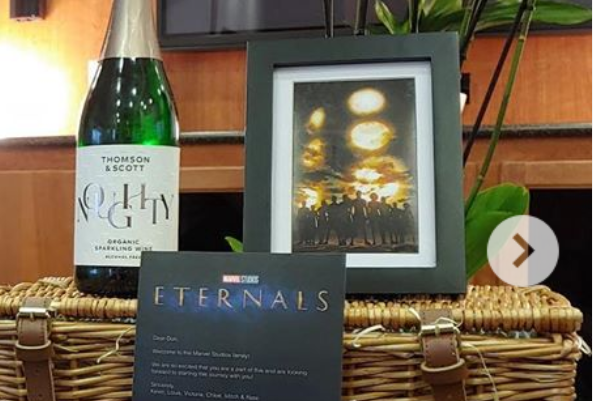 According to the piece in Yahoo, this isn’t the first time we’ve seen the Celestials connected with the Eternals. Last August, Marvel artist Rodney Fuentebella released a SDCC poster featuring the Celestials. Its safe to say given the two bits of concept art that the Celestials will have a very important role to play in Eternals when it finally hits theaters early next year.

Here is the Marvel’s Eternals poster I did for the San Diego Comic-Con 2019. This was an exclusive poster given out on Sunday at the event. I cannot believe I was able to do this poster for @sdcc_2019 !! Thanks to @marvelstudios and @ryan_meinerding_art for letting me paint this poster. Be sure to check this movie when it comes out… we are working really hard on this one too! Enjoy! – @marvel #eternals #marvel #digitalart #digitalpainting #zbrush #photoshop #mcu #exclusive #painting #conceptart @rodneyimages

According to Marvel, the Eternals will feature a new team of superheros in the Marvel Cinematic Universe, ancient aliens who have been living on Earth in secret for thousands of years.  Following the events of Avengers: Endgame, they reemerge from the shadows to reunite against mainkind’s most ancient of enemies – The Deviants.

Here at MickeyBlog we’ve previously shared casting details for Eternals with you which includes:

The Eternals is directed by Chloé Zhao, who helmed the critically acclaimed Sundance film “The Rider,” “The Eternals” opens in U.S. theaters on Nov. 6, 2020.